INTRODUCTION: Pellets defined as a small free flowing spherical particulates manufactured by the agglomeration of fine powders or granules of drug substances and excipient using appropriate processing equipment.  Reservoir pellets consisting of a drug-layered as starter core and a water-insoluble polymer coating to control the release of the active compound, have become increasingly important for sustained drug delivery 1.

However, drug release is a complex interplay of the coating and the drug core. While the polymer mainly governs factors, like the permeability of a film coating and release.

Release depending on the properties of the drug core like coating hydration, medium uptake, drug dissolution, build-up of hydrostatic pressure and potential crack formation 2.

With reservoir-type coated pellet dosage forms, the polymeric coating must be able to withstand the compression force; it can deform, but it should not rupture. Polymers used in the film coating of solid dosage forms fall in two broad groups based on either cellulosic or acrylic polymers 3.

MATERIALS: Carvedilol obtained as a gift sample from Sun Pharmaceutical industries Ltd., Vadodara, Gujarat. Crosspovidon HPMC K4M and MCC pH 101 and all other chemicals and reagent were of analytical grade.

Preparation pellets: The sustained release matrix tablets were formulated by using drug, disintegrant and coating material like ethyl cellulose and Eudragit RS 100. The non-pareil seeds were loaded with Carvedilol suggested as in step I referred as drug pellets. The step I referred as drug pellets prepared by loading the Carvedilol on non-pareil seeds, in the step II disintegrant Crosspovidon layered on non-pareil seed referred as disintegrant pellets. Finally, the Carvedilol loaded pellets of step I layered with several coats of ethyl cellulose or Eudragit RS 100 referred as soft pellets (III step). By using various ratio of these pellets sustained release tablet were prepared and evaluated for further investigation to obtain best formulation, which obeys the maximum characteristics to fulfil the desired requirements 4, 5, 6, 7.

Evaluation of Pellets prepared in step I, II and III:

50 gm of sample weighted and placed on top sieve of mechanical sieve shaker and shake for 20 min. After removing, the sieves pellets retained on each sieve weighed. These processes were following for all the formulated pellets 8, 9, 10. The percentage

weight of powder retained on each sieve calculated using following formulas given in equation 01 and 02:

The particle size analysis of different types of pellets; drug pellets (Carvedilol), soft pellets coated with ethyl cellulose 10 cps and Eudragit RS 100 and disintegrant pellets through sieve analysis from the sieve shaker. The particles pass through #60 and retain on #100 i.e. particle ranging 150-350 micron are used for further investigation.

The regular size of pellets does not interact in tablet compression without damaging the tablet core hence the drug release could be maintain for longer time. The mechanical properties of drug pellets, coated pellets and disintegrant can affects the reservoir pellets and it has equal importance in drug release mechanism of sustained release.

The intragranular porosity of the pellets was calculated (n=1-3) as one minus the ratio of the effective and apparent particle densities. The effective pellet density determined by mercury pycnometer.

Accurately weighed quantities of the pellets added to the cylinder with the aid of a funnel. Typically, the initial volume was noted and the sample was then tapped until no further reduction in volume was noted. The volumes before and after tapping were used on the standard equation to compute bulk and tapped density respectively.

The compressibility index and the closely related Hausner’s ratio have become the simple fast and popular methods of predicting powder flow characteristics. The compressibility index has been propose as an indirect measure of bulk density, size and shape, surface area, moisture content and cohesiveness of materials. Both are determined by measuring both the bulk volume and tapped volume of a powder. The basic procedure is to measure the unsettled apparent volume and the final tapped volume of the powder after tapping the material until no further volume changes occur. The compressibility index and the Hausner’s ratio calculated as follows:

The angle of repose determined by funnel method. The accurately weighed powder blend taken in a funnel. The height of the funnel adjusted in such a way that the tip of the funnel just touched the apex of the heap of the powder blend. The blends allowed to flow freely onto the surface. The diameter of the powder cone measured and angle of repose calculated using the following equation:

The physical evaluation performed for the consolidation and compression properties for individual pellets of Carvedilol. These evaluations include bulk density, tapped density, compressibility index, Hausner’s ratio and angle of repose. The results are satisfactory and within the prescribe range indicates good flow ability and compressibility. 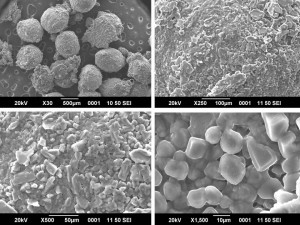 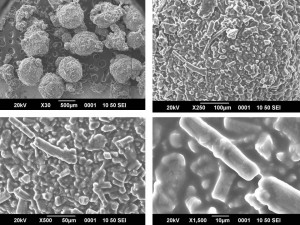 Visually the Fig. 1 and 2 shows similar appearance and indicates no change in physical parameters. The surface of Carvedilol pellet was smooth as observed in SEM micrographs. The difference between surface roughness parameter were statistically and significant. Such difference could explain in terms of the particle size of the active ingredients.

The post compression study includes thickness, hardness, friability, weight variation and assay are found in the range specified 23, 24, 25; the data are tabularized in Table 6. 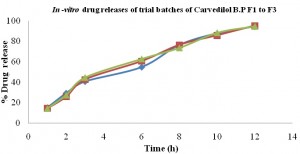 FIG.4: IN -VITRO DRUG RELEASES OF TRIAL BATCHES OF CARVEDILOL F1 TO F3 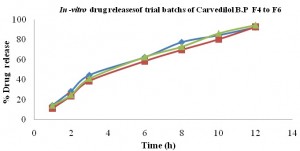 FIG.5: IN -VITRO DRUG RELEASES OF TRIAL BATCHES OF CARVEDILOL F4 TO F6

From the findings of the dissolution analysis data interpreted as F2 batch of Carvedilol shows 95.21% means 11.90 mg Carvedilol release in 12 h. Hence, from dissolution analysis and physical evaluation results F2 considered as optimized batches as the results were within the prescribed limits. This batches used for further investigate as optimized batches.

The stability study of the Carvedilol tablet (F2) was carried out according to ICH guidelines at 40 ± 2OC and 75 ± 5% relative humidity for three months by storing the samples in stability chamber 26, 27, 28, 29. The result of stability analysis of Carvedilol for physical analysis was described in Table 8 whiles the results of in-vitro analysis in Table 9 and Fig. 6 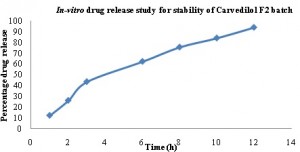 The results of stability study for optimized Carvedilol F2 interprets that after the three months the physical evaluation and in-vitro drug release data were satisfactory and within the prescribed range.

The results show that regression coefficient value closer to unity in the case of the zero order plots indicates that the drug release follows a zero order mechanism. The results also internet that lesser linearity in graphs of first order but at the same time Korsmeyer-Peppas Equation fitted in all the dissolution data kinetic.  Here the value of the exponent “n” which is obtained from the slope of the graph of log Q (amount of drug dissolved) Vs log t (time) yielded the values. From the reference values, of exponent n in the range of 0.7300<n<1 is indicative of anomalous transport or non - Fickian diffusion.

DISCUSSION AND CONCLUSION: The major aim of this work was to identify the major parameters affecting drug release from matrix-coated pellets. Geometry of the drug type, drug loading, additive, polymer type, core and coat type, size, release from tablets, stability and kinetics has investigated. Varying the type of the polymer had a great impact on release. Carvedilol release (F2 batch show 95.21%) was much faster from Eudragit RS 100 than from ethyl cellulose coating and this had attributed to the higher polymer permeability of Eudragit RS 100. The drug release was show drug partition into the polymer and hence that release have related with permeability of the matrix. This work shows the importance of some key factors to consider when designing coated sustained release formulation using reservoir pellets and provides deeper information about the appropriate storage conditions to guarantee an optimized finished product. Way to design oral modified release systems is to coat pellets with a polymer that regulates drug release rate, such reservoirs pellets can be compacted into sustained release tablets. The tablets normally intended to disintegrate into discrete pellets in the gastrointestinal tract and the drug should subsequently release in a controlled manner from the individual pellets.