INTRODUCTION: Plants produce a diverse range of bioactive molecules that make them rich sources of different types of medicine. Many medicinal plant species worldwide are used in traditional medicine as a treatment for skin diseases caused by fungi and bacteria 1.

Andrographis paniculata (A. paniculata), locally known as hempedu bumi or Bile of Earth, is a plant which can be found in abundance in Malaysia.

It has been previously shown to exhibit a wide range of pharmacological effects in animals such as anti-diabetes, antidiarrhoeal, anti-viral, anti-inflammatory, hepatoprotective, anti-malarial, anti-HIV, anti-cancer, anti-venom and immune stimulatory 2. The main chemical constituents of A. paniculata which is diterpenoids and flavonoids are believed to be responsible for most of the biological activities of this plant 3. A. paniculata is considered beneficial to the skin and is used both externally and internally for the treatment of skin diseases 4.

Staphylococcus aureus (S. aureus) causes a variety of skin infections.5 These infections are characterized by the formation of pus containing blisters, which often begin in hair follicles and spread to adjoining tissues. There are a few types of S. aureus infections, including folliculitis, furuncles, carbuncles, mastitis, impetigo, and cellulitis.6 The common treatments for S. aureus skin infection include administration of antibiotics and surgical.

Most research focuses on determining anti-bacterial properties of crude extract of A. paniculata. So far no pharmaceutical cream dosage form that incorporates A. paniculata has been produced or marketed. There is a clear gap between research and product commercialization. Plant-based medicine can be a viable alternative to antibiotics subject to proper investigation and appropriate documentation. Therefore, this study aimed to determine the antibacterial activity of cream formulations containing A. paniculata against S. aureus.

Selection of Plant: A. paniculata plants with an annual growth of 0.60-0.70 m in height were selected in which the mature leaves were used. The leaves were dark green in color and free of crops and free from insecticides and pesticides.

Plant Identification: Specimen sample was authenticated by Dr. Richard Chung (Taxonomist, FRIM) and deposited (sample number: PID 180712-12) in the herbarium of FRIM, Malaysia. A. paniculata is from the family of Acanthaceae with the scientific name of A. paniculata (Burm. f.) Wall. Ex Nees. Its local name includes hempedu bumi and akar cerita. The collector for the fresh plant materials leaves was En Mat Asri Ngah Sanah with the collection number of FRI 38708 from Perlis.

Preparation of Plant Sample Material: Fresh plant leaves of A. paniculata were air dried at room temperature for five days to remove excess water in the leaves. After five days, the leaves of A. paniculata were dried in a Protech laboratory dryer (LDD-720) from Germany at 37 °C for seven days to remove water further and prevent the growth of fungus on the surface of the leaves. The final weight for the oven-dried A. paniculata leaves is 20 kg. The preparation was conducted by Ethno Herbs Resources Sdn. Bhd.

Preparation of Aqueous Extract: The preparation of aqueous extract of A. paniculata was conducted at Herbal Technology Centre (HTC), Forest Reserve Institute of Malaysia, Kuala Lumpur. Three major processes were involved, including the extraction, concentration and freeze-drying processes for the preparation of aqueous extract into the powdered form. These processes were carried out using automated equipment on an industrial scale and in compliance with Good Manufacturing Practices (GMP). Briefly, the dried leaves of A. paniculata were first ground into smaller fragments of leaves using a grinder (EXTA, model GETF-1200) to increase the surface of the leaves and to remove their moisture.

Concentration: The extract was transferred into an EXTA evaporator (EETF-950) to concentrate the extract from 400 liters to 14 liters. The temperature was maintained at 60 °C under vacuum. 2 liters of the aqueous concentrated extract was then stored at -18°C before using.  The remaining aqueous extract was freeze-dried under vacuum using a Millrock freeze dryer (85XL) for 48 hours. 0.82 kg of powdered A. paniculata was obtained and stored in at room temperature before use.

Preparation of Aqueous Extracts: Various concentrations of aqueous A. paniculata extracts prepared from both concentrated liquid extract and powder. The two different types of aqueous extracts were evaluated for in-vitro antibacterial activity. All procedures involved in this preparation were done under strict aseptic conditions to avoid contamination of the extracts. All glassware including beaker, volumetric flask, dropper, measuring cylinder, pipette, conical flask, laboratory glass bottles were autoclaved at 121°C for 20 min before use.

Agar Disc Diffusion Method: S. aureus stock cultures with ATCC number 25923 (Thermo Fisher Scientific, Malaysia) was initially grown on nutrient agar plates or blood agar at 37 °C and incubated for 24 hours followed by transferring them onto blood agar using the streak-plate technique. The inocula were prepared in Mueller-Hinton agar (100 mm) at a density adjusted to a 0.5 McFarland turbidity standard for the disc diffusion method. Gentamicin 6-mm discs (Becton Dickinson, USA) were used as a positive control in this study.

For negative control, 10% aqueous Dimethyl sulfoxide (DMSO) and normal saline were prepared. The diameter of the zone of inhibition was visually measured using a ruler.

Preparation of Dried Filter Paper Discs: A. paniculata extracts prepared from concentrated liquid extracts and powdered were initially passed through a 0.45 mm membrane filter. Whatman no. 1 filter paper was used to prepare discs with 6 mm in diameter using a single hole puncher. The discs were placed in a sterile covered petri dish and sterilized in an oven at 160 °C for an hour.

The sterile filter discs of 6mm were then impregnated with 10μL of the aqueous extracts prepared from both concentrated liquid extract and powder A. paniculata at a various concentration (5, 25, 50, 75 and 100%v/v). The cover of the Petri dishes was closed immediately once the impregnation process done was to minimize the risk of contamination. The discs were later allowed to dry at room temperature for an hour before transferring them onto the Mueller-Hinton agar.

Cream formulation: An O/W cream formulation was used based on the previous study.8 The formula for the various creams is shown in Table 1. The oily phase components such as stearic acid, white beeswax, cetyl alcohol, mineral oil, and stearyl alcohol (R&M) was purchased from Dynamic Sains Sdn. Bhd. For the aqueous phase components, propylene glycol, methylparaben, and propylparaben were purchased from Euro-Chemo Pharma Sdn. Bhd. while triethanolamine was sourced from Becton Dickinson, USA.

Briefly, the components of the oily and aqueous phases were weighed and dissolved in the water bath at 75 °C separately. The aqueous phase was gradually added to the oily phase and stirred continuously until the mixture cooled, and the cream was transferred into a plastic container and labeled accordingly.

Statistical Analysis: Statistical analysis was performed using the Statistic Package for Social Sciences program version 19 (SPSS 19.0) and Microsoft Excel 2007. ANOVA followed by posthoc ‘Tukey’s test’ were conducted to determine the significant difference between groups. A p-value of less than 0.05 was accepted as statistically significant.

Fig. 2 shows the zone of inhibition exhibited by various concentrations of polar extracts prepared from powder A. paniculata. All polar aqueous extracts displayed positive anti-bacterial activity against Gram-positive strain S. aureus (p<0.05). However, in comparison with the results using liquid extracts, polar extracts of A. paniculata prepared from concentrated liquid extract displayed a higher anti-bacterial activity with greater diameter of inhibition zones (2.08 ± 0.67 mm to 17.08 ± 0.67 mm) compared to the polar extracts of powder A. paniculata (1.33 ± 0.49 mm to 15.25 ± 0.62 mm).

Based on this study, all polar aqueous extracts prepared from both concentrated liquid extract and powder A. paniculata displayed antibacterial activity against gram-positive bacteria strain S. aureus (p<0.05). Active plant constituent such as the andrographolide is mostly concentrated in the leaves, which is very bitter and exhibits natural anti-bacterial properties. There are many other phytochemicals which can be isolated from the plant, especially the leaves, roots and stems including sesquiterpenes, lactones, and flavonoids that may contribute to the anti-bacterial properties of the plant.

Although, both polar extracts prepared from concentrated liquid and powder A. paniculata displayed antibacterial activity against Gram-positive strain S. aureus, they still possess a lower anti-bacterial activity compared to gentamicin antibiotic discs, the positive control (p<0.05). However, the anti-bacterial activity for both concentrated liquid and powder extract in this study were lower than the one reported in an earlier study 9. This might be due to the differences between the maturity and the origin of the plant used.

Evaluation of Anti-bacterial Properties of Cream Formulations containing A. paniculata: All of the A. paniculata creams with and without preservatives displayed antibacterial activity against Gram-positive strain S. aureus (p<0.05) (as shown in Fig. 4 and 5. As expected, S. aureus was less sensitive to the 5% A. paniculata cream compared to the higher concentrations. 100% A. paniculata cream exhibited the highest zone of inhibition, which shows that the Gram-positive strain was susceptible to growth inhibition by the plant extracts at high concentration when incorporated into the cream. Both extract alone and cream exhibited good anti-bacterial activity, although it was slightly reduced in the form of cream. 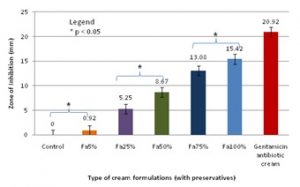 FIG. 4: ZONE OF INHIBITION EXHIBITED BY CREAM FORMULATIONS (WITH PRESERVATIVES) WITH DIFFERENT CONCENTRATION OF EXTRACT (n=3) 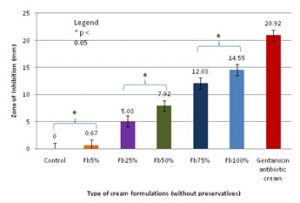 FIG. 5: ZONE OF INHIBITION EXHIBITED BY CREAM FORMULATIONS (WITHOUT PRESERVATIVES) WITH DIFFERENT CONCENTRATION OF EXTRACT (n=3)

A lower concentration of extract contains a lower amount of active components, which results in a reduction in the antibacterial activity of the cream 8. A study on the formulation and evaluation of an anti-bacterial cream using Oxalis corniculata (common yellow woodsorrel) polar aqueous extract showed there was an increased anti-bacterial activity of the cream when a higher concentration of the extract was used 10. 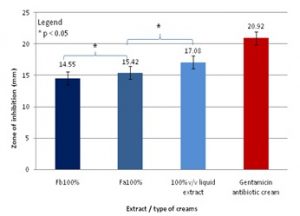 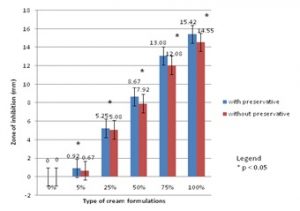 FIG. 7: ZONE OF INHIBITION EXHIBITED BY TWO A. PANICULATA CREAM FORMULATIONS (WITH AND WITHOUT PRESERVATIVES) WITH DIFFERENT CONC. OF EXTRACT

The preservatives methylparaben and propylparaben, both act as an antimicrobial preservative 11. Although the antibacterial activity is statistically different (p<0.05), this result confirmed that A. paniculata on its own still possesses good anti-bacterial properties.

CONCLUSION: To our best knowledge, this is the first study to incorporate A. paniculata into a topical cream. In this study, different concentrations (5%, 25%, 50%, 75% and 100%v/v) of aqueous extracts of A. paniculata, prepared from both concentrated liquid and powder, exhibited anti-bacterial activity towards S. aureus. There seems to be a correlation between the concentration of the aqueous extract and its anti-bacterial properties.

ACKNOWLEDGEMENT: The authors wish to acknowledge Cyberjaya University College of Medical Sciences for the research grant provided for this research.