ABSTRACT:Bambuterol HCl is a potent anti-asthmatic agent, act by stimulation through beta-adrenergic receptors of intracellular adenylcyclase. Increased cyclic AMP levels are associated with relaxation of bronchial smooth muscle and inhibition of release of mediators of immediate hypersensitivity from cells, especially from mast cells.  In the present study, an attempt has been made to prepare fast dissolving tablets of Bambuterol HCl in the oral cavity with enhanced dissolution rate and to achieve better patient compliance. The tablets were prepared with four superdisintegrants e.g., Sodium starch glycolate, Cross-povidone, Cross-carmellose sodium, Pregelatinized starch by direct compression method. The pre-compression parameters of mixed blend were examined for angle of repose, bulk density, tapped density, Compressibility index and Hausner’s ratio. The tablets were evaluated for hardness, friability, weight variation, disintegration time, dissolution rate, content uniformity and drug content. It was concluded that the fast dissolving tablets with proper hardness, rapidly disintegrate with enhanced dissolution can be made using selected superdisintegrants. Among all formulations, batch D4 was considered as best since it showed enhanced dissolution, which leads to improved bioavailability, improved effectiveness and hence better patient compliance.

INTRODUCTION: Asthma is an inflammatory disorder that results in the obstruction of air pathways and causes difficulty in breathing. Amongst the currently available means of treatment, oral dosage forms are associated with lag time and delayed onset of action. However, aerosol and parentral have rapid onset of action but strongly affect patient compliance. Thus, an attempt was made to improve the onset of action of bronchodilator used commonly in treatment of asthma.

It is always the aim of a scientist or a dosage form designer to enhance the safety of a drug molecule while maintaining its therapeutic efficacy. Recent advances in Novel Drug Delivery Systems (NDDS) aim for the same by formulating a dosage form, convenient to be administered so as to achieve better patient compliance. Pharmaceutical technologists have put their best efforts to develop a Fast Dissolving Drug Delivery System. Tablets that disintegrate or dissolve rapidly in the patient’s mouth are convenient for children, the elderly and patients with swallowing difficulties, and in situations where potable liquids are not available.

Bambuterol hydrochloride (BBL), (RS)-5-(2-tert-butylamino-1-hydroxyethyl)-m-phenylene bis (dimethylcarbamate) hydrochloride is a direct acting sympathomimetic with predominantly -adrenergic activity (β2 -agonist). It is an ester pro-drug of β2 adrenergic agonist terbutaline. In the present study, an attempt had been made to prepare fast dissolving tablets of Bambuterol HCl in the oral cavity with enhanced dissolution rate & hence improved patient compliance 1-6.

Preparation of mixed blend of Drug and Excipients: All the Ingredients were passed through mesh # 60. Required quantity of each ingredient was taken for each specified formulation (listed in the Table 1) and all the ingredients were co grind in mortar and pestle. The powder blend was evaluated for flow properties such as Bulk density, Tapped density, compressibility index, Hausner’s ratio. 7, 8

Compression of Tablets: The ingredients listed in Table 1 (except magnesium stearate) were mixed homogenously and cogrinded in a mortar and pestle. Finally, magnesium stearate was added and mixed for 5 min. The mixed blend of drug and excipients was compressed using 10 station rotary punch tablet machine (Karnavati- mini press) to produce convex faced tablets weighing 120 mg each with a diameter of 8 mm. A minimum of 50 tablets were prepared for each batch.

Weight variation: Weight variation was done by selecting 20 tablets randomly and weighing individually. Average weight was calculated and the weight of individual tablet was compared with it.

Thickness: The thickness was measured using Vernier Caliper and expressed in mm.

Friability 11: Friability test was performed using a Roche friability testing apparatus. It is performed to access the effect of friction and shocks which may often cause tablet to chip, cap or break. This device subjects a number of tablets to the combine effect of abrasion and shock by utilizing a plastic chamber that revolves at 25 rpm, dropping the tablets at a distance of 6 inches with each revolution. Pre-weighed tablet sample is placed in friabilator which is then operated for 100 revolutions. The tablets are then dusted and re-weighed.  The % friability was measured using following formula:

Hardness: The strength of tablet is expressed as tensile strength (Kg/cm2). The tablet crushing load, which is the force required to break a tablet into halves by compression .It was measured using a tablet hardness tester (Monsanto hardness tester) 12, 13.

RESULTS AND DISCUSSION: Eight formulations of Bambuterol HCl were prepared with varying concentration of four superdisintegrants: Sodium starch glycolate, Cross-povidone, Crosscarmellose Sodium, Pregelatinized starch. Microcrystalline cellulose and mannitol were used as diluents (Table 1). For each formulation, blend of drug and excipients were prepared and evaluated for various parameters as explained earlier. The powder blend was compressed using direct compression technique. Bulk density, was found in the range of 0.367-0.527g/ml and the tapped density between 0.412- 0.582g/ml.

The Hausner’s ratio and Compressibility index was calculated using bulk and tapped density data. Hausner’s ratio for prepared formulation was found to be <1.19 which indicates good flow property. The compressibility index was found to be between 3.88 - 15.12% which indicates good flowability of the powder blend. The excellent flowability of the powder blend was also evidenced with angle of repose (ranging from 27.6˚- 29.8˚) which is below 30˚, indicating excellent flowability (Table 2). Tablets were prepared using direct compression technique. Since the powder material was free flowing, tablets were obtained of uniform weight due of uniform die fill, with acceptable weight variations as per B.P. The drug content was found in the range of 98.5 % - 101.1% (acceptable limit). Friability of the tablets was found below 0.7% and hardness was found between 3.1-4.1 kg/cm2, indicating a good mechanical resistance of the tablets, and the parameters were found well within the specified limit for uncoated tablets.

The in vitro disintegration time (DT) of the tablets was found to less than 60 sec. Tablets containing 6% and 12% Pregelatinized starch (D1) had Disintegration time of 54 and 50 sec respectively. While rest of the tablets had Disintegration time around 35 sec only.The preparation process in direct compression tablets includes co grinding of all the excipients before compression, result in the increase in the solubility due to the reduction in the effective particle size of the drug following increase in the wetting of drug particle by the excipients and improved dissolution of drugs. 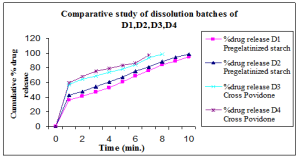 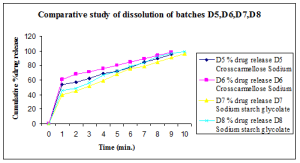 The order of enhancement of the dissolution rate with various superdisintegrants was found to be Cross-povidone>Crosscarmellose >Sodium starch glycolate>Pregelatinized starch. It was concluded that fast disintegrating tablets of Bambuterol HCl can be successfully prepared using selected superdisintegrants in order to improve disintegration/dissolution of the drug in oral cavity & hence better patient’s compliance & effective therapy.