ABSTRACT: The present study depicts formulation and characterization of boric acid gel formulations. The formulated gels intervenes the advantages of gels along with higher and effective antimicrobial activity when compared to the formulations available in the market. The preparations were evaluated for different parameters as basic physico-chemical properties like physical appearance, texture, pH measurement, spreadability, viscosity and spectral analysis (UV-Visible and IR Spectroscopy) for its standardization. The sharp peak at 230nm was obtained in UV-Vis spectra. I.R spectra revealed that the boric acid binds extensively to the polymers.  Antimicrobial activity of formulation was studied using Muller Hinton agar medium against E.coli MTCC 614 and S.aureus MTCC 3160.

INTRDUCTION: Topical formulations are meant for localized action on different layers of skin. Topical administration of drugs is becoming an important route of drug administration as it reduces GIT irritation and also it by-pass first pass metabolism which enhance the bioavailability of the drug with fast onset of action for treating skin ailments. They are non-invasive and patient compliant preparations. They are less greasy and can be easily removed from the skin1.  Conventional ointments, creams, lotions, liniments, microemulsions and gels are the most widely available preparations for the local treatment of skin ailments. For topical formulations, there is a requirement for the good spreadability with optimum viscosity so that they can easily spread on the affected area as a thin film layer and help to protect the lesions. All these type of problems have made the researchers to explore different polymers for topical formulations of boric acid.

Recent studies suggested that the active ingredients in gel based formulations are better percutaneously absorbed than from creams and ointment bases. Topical formulations deliver the drug more selectively to a specific site and prevent gastro-intestinal incompatibility. It provides suitability for self-medication with improved physiological and pharmacological response with improved patient compliance 2.

Topical formulations avoid inconvenience caused by intravenous administration. It provides efficacy with the lower total daily dosage of the drug by continuous drug input and avoid fluctuations in drug level and also application of drug can be terminated  when needed 3, 4.

Gels are semisolid systems in which a liquid phase is constrained within a three-dimensional polymeric matrix in which a high degree of cross-linking occurs. In the present study, for boric acid gel formulation carbopol was selected as a gelling agent because carbopol polymer family is based on cross linked acrylic acid.  It enables formulation flexibility because of its surfactant compatibility and synergistic thickening properties with salts.  It also provides process flexibility by its ability to be incorporated at different process stages 5, 6. The flocculated agglomerates cannot be broken into the ultimate particles when produced. Each particle can be viewed as a network structure of polymer chains interconnected via cross-linking. Carbopol polymers have demonstrated zero-order and near zero-order release kinetics. These polymers are effective at low concentrations (less than 10%) and provide rapid and efficient gelation characteristics under both simulated gastric fluid (SGF) and simulated intestinal fluid (SIF) test conditions 7. 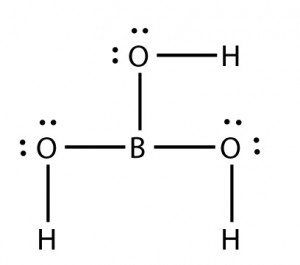 Boric acid crystals are white, odorless, and nearly tasteless. It looks like fine table salt in the granular form or like baby powder in the powdered form.  It is commonly used in contact lens solutions, eye disinfectants, vaginal remedies, baby powder and in anti-aging preparation.

Boric acid used in concentrations ranging from 1% to nearly 100%.The water the solubility of boric acid increases at higher water temperatures. Boric acid is a weak acid (pKa=9.15), existing in aqueous solutions at or below pH 7 as undissociated boric acid. Above pH 10 the metaborate anion dominates the solution.

Effect of heat on boric acid

Boric acid acts as a stomach poison in insects and may also have some toxic effects on the nervous system of insects. It inhibits the growth of fungi by preventing the production of reproductive spores. Boric acid and its sodium borate salts are active ingredients in pesticides used against insects, spiders, mites, algae, molds, fungi, and weeds. Literature revealed that the gel containing copolymers of N-vinylacetamide and monomers with high amount of boric acid were used as poison baits against cockroaches 8.

Materials: Boric acid and zinc oxide used for the preparation of formulations were of IP/ USP standards hence were used without further purification. All other chemicals used in the present study were of AR Grade.

Boric acid formulations were prepared by dispersing optimized amount of different gelling agents like carbopol, sodium carboxymethyl cellulose and methyl cellulose in water for specified period of time. Boric acid and zinc oxide were dissolved separately in ethanol and this solution was slowly added to polymer dispersion. Glycerin and preservative propyl paraben were added to the above dispersion and was stirred continuously till it forms a homogeneous product 10.

The prepared gels were stored in a wide mouthed bottle at room temperature. The composition of the various formulations is shown in Table 1.

It is one of the most sensitive methods for the determination of a compound. The prepared gels were subjected for standardization using spectral analysis. In this method, 1 ml of the drug loaded gel was subjected to serial dilution. 1 ml of the gel preparation was diluted 100 times and further 1 ml of the diluted solution was made up to 3 ml using distilled water which was then subjected for UV-Visible analysis 11.

The prepared gels were analyzed for IR spectroscopy using KBr disc method. In this method, 0.1ml of the prepared gel was mixed with KBr powder and the mixture was punched to obtain a KBr pellet loaded with gel. The pellet was then loaded onto the FTIR instrument set at 26°C ± 1°C. The samples were scanned in the range of 4,000 to 400 cm−1 using Fourier transform infrared spectrometer. The spectra of the gel were compared with the IR spectra of boric acid to study any physical interaction occurring between the drug and the polymer used 5.

The drug loaded formulations were subjected to evaluation for the physical appearance i.e. the color and transparency of the gels were studied using visual inspection method 13.

Formulations were subjected to pH measurement using a digital pH meter. Electrode probe of the pH meter was dipped into the prepared composition and the pH of the preparation was noted 14.

The Viscosity of prepared formulations was determined using Brookfield viscometer (Brookfield Engineering Laboratories, USA) with spindle # C 50-1 having a speed of 50 rpm. All the measurements were done in triplicate at room temperature 15.

Spreadability denotes the extent of the area to which the gel readily spreads on application to the skin or the affected part. Spreadability is expressed in terms of time taken in seconds by two slides to slip off from the gel placed in between the slides, under certain load (Patel and Kamani, 2002). Spreadability was calculated by using the following formula: S= ML/T; Where, S: Spreadability (g.cm/sec), M: Weight tied to the upper slide (20 g), L: Length of the glass slide (6 cm), T: Time taken in seconds 16.

Antimicrobial activity of the prepared gels were screened in vitro by disc diffusion assay method against two common strains i.e.  E. coli and S. aureus and results were compared with marketed preparation Boroline. Microorganisms were cultured in Mueller– Hinton broth (MHB) and after 24 hrs; the suspensions were adjusted to standard sub culture dilution. The petri dishes containing Muller Hinton Agar (MHA) medium were cultured with diluted bacterial strain. Samples and standard were then loaded to petri plates with two different concentrations ie. 100 and 150 mg. The drug loaded plates were then incubated at 37°C for 24 hours. The zones of inhibition were measured and reported 17.

I UV- Visible Analysis: Prepared drug loaded gels were subjected to UV-Visible analysis.  Prepared gels were diluted to desired dilution of 1/100th. Then 1 ml of this diluted solution was taken and was further diluted upto3 ml with double distilled water and this final dilution was used for spectral analysis. It was observed that all the prepared gels indicated maxima at 255nm assuming the peak for drug bound to polymer. For marketed preparation Boroline was used as standard and was diluted using hexane and sharp peak at 230nm indicated maxima for drug along with other excipients (Fig. 1). 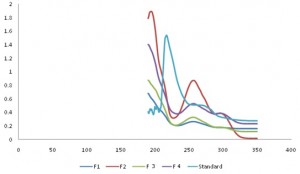 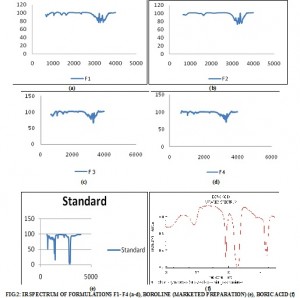 The solubility profile of the prepared gels is as follows

The antimicrobial activity of the prepared gels was carried out using Muller Hinton agar medium using microbial cultures E.coli MTCC 614 and S.aureus MTCC 3160. All the glassware and bore making equipments were sterilized previously using an autoclave. The zones of inhibition of prepared formulations (100, 150 and 200mg) were recorded for both gram positive and gram negative bacteria  for which the bore size of 6mm was taken. Zone of inhibition obtained for different formulations for different concentrations are summarized in Table 4 and Fig.3.

TABLE 4: ZONES OF INHIBITION OF FORMULATIONS 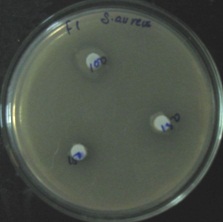 FIG.3: ANTIMICROBIAL ACTIVITY OF THE F1 GEL FORMULATION AGAINST S.AUREUS.

CONCLUSION: Topical formulations containing boric acid were prepared and evaluated. It was observed that boric acid when bound to the polymer  showed deviation in  U.V visible and IR spectra  when compared with standard boric acid. Solubility of standard was maximum in hexane whereas prepared formulations shows much solubility in water, ethanol and 0.1M HCl and least was observed in hexane. Highest viscosity was observed in F2 with least spreadability containing carbopol and sodium CMC whereas highest antimicrobial activity was indicated in F1 formulation containing methyl cellulose 3%w/v. Hence, further studies are required to prevent the interaction and for stable therapeutically active topical formulation.