ABSTRACT: The present research work was intended to develop and characterize the transdermal adhesive patch of clozapine using different types of acrylate, polyisobutylene and silicon adhesives. Various permeation enhancers such as 1, 8 – cineole, D-limonene, Azone, IPM and Oleic acid were also evaluated to achieve desired permeation rate and hence to attain the improved bioavailability as compared to oral formulation. Formulation prepared were evaluated for physicochemical characterization, FTIR, DSC, permeability enhancement potential by ex-vivo, and stability studies. The results of the optimized formulation showed peel strength of 411 ± 3.56 cN/cm, flux of 109.59 ± 1.59 (µg/h/cm2) and % drug content of 99.53 ± 0.42% which was stable up to six months in accelerated condition. The results of the study revealed that the developed transdermal patch of clozapine can be a promising alternative which provides effective management of schizophrenia in terms of improved patient compliance and bioavailability which in turn reduces the dosage frequency and hurdles associated with the caretakers and doctors.

INTRODUCTION: Schizophrenia is characterized by disintegration of thought processes and of emotional responsiveness. It is a severe form of mental illness affecting about 21 million people worldwide 1, 2. Clozapine is taken twice daily, orally, in the form of tablet. However, when taken by oral route, it undergoes extensive first pass metabolism and oral bioavailability of clozapine is reported to be less than 27% 3. Clozapine is extensively metabolized by hepatic microsomal enzymes (CYP1A2 and CYP3A4) and forms N-demethyl and N-oxide metabolites.

These makes delivery of clozapine, a challenging task for the efficacious therapy of nervous disorders such as schizophrenia, where prolonged drug delivery is essential for the people who may need assistance to receive medication by oral or by parenteral route. The topical drug delivery provides various benefits as compared to traditional dosage forms viz. improved compliance of patients on long-lasting therapy, maintaining a prolonged and constant plasma level of drug (thereby diminishing the side effects associated with the oral route), bypassing biotransformation, reducing inter and intra-patient variability and making it possible to put an end to drug therapy whenever needed 4.

Materials: Clozapine was given as a gift sample by Piramal Enterprises Ltd. India. Different grades of pressure-sensitive adhesives (PSA), release liners and backing membranes were procured from Henkel Corporation and 3M Healthcare. Isopropyl myristate (IPM) was purchased through Triveni Interchem Pvt. Ltd., Vapi, India. D-limonene and oleic acid were purchased from A.B. Enterprises, Mumbai, India. 1, 8-Cineole was purchased from Sanket Enterprises, Mumbai, India. Other reagents and chemicals used in the research were procured from reliable and standard sources.

Formulation of Transdermal Patches: 5, 6 Transdermal patches of clozapine were prepared by the solvent casting technique. Clozapine was dissolved in a concentration of 20% w/w along with pressure-sensitive adhesive (DT-387-2510) in a solvent system of ethyl acetate. In addition to this oleic acid (12.5% w/w of dry polymer weight) as permeation enhancer was added to the above solution. To prepare homogeneous dispersion, the mixture was continuously stirred for 30 min and poured on a release liner (Scotch pack 1022, 3M, USA). The patch was kept at room temperature for 10 minutes and then dried in oven at 50 °C for 5 min and laminated with backing membrane (Scothpack 9723, 3M, USA).

Physical Characterization: The prepared transdermal patches (4.41 cm2) were evaluated for weight variation by digital electronic balance (Mettler Toledo, Ohio, USA).The thickness of the patch was measured by using a digital vernier calliper (Mitutoyo, Japan) at random points 7. Peel strength was determined by loyd universal testing machine (LRX+) (Testometric, Rochdale, United Kingdom) 8, 9. Drug content was quantified by dissolving the patch of size 4.41 cm2 in 100 mL of methanol, which was then analyzed spectrophoto-metrically at a wavelength of 259 nm 10.

Ex-vivo Permeation Study: The ex-vivo permeation studies were carried out in vertical Franz diffusion cell using Wistar rat skin (Approval no. ROFEL/IAEC/2018/3) after detaching the adhering fat and hair. The formulation was fixed on the skin in such a way that the drug matrix was facing the donor side. Phosphate buffer (pH 7.4) was used as receptor fluid maintained at a temperature of 32 ± 0.5 ºC along with the agitation speed of 50 rpm. At different time intervals, the samples were withdrawn and exchanged with equal amounts of fresh media. Aliquots were analyzed spectrophotometrically at a wavelength of 259 nm 11. The drug permeated per cm of the patch was given as per the following equation and plotted against time and the flux was calculated as drug permeated per cm2 per hour 12.

Where Cn is the receiver solution concentration of drug, Ci is the ith sample drug concentration, V0 and Vi are the receptor medium volume and sample volume, respectively, while S is the effective area of diffusion 13.

Interaction Studies: The interaction studies were performed for finalized batch by doing comparison of the clozapine, PSAs, and a mixture of clozapine and PSAs based on FTIR (Jasco 1800, Tokyo, Japan) and DSC (Shimadzu 60A, Kyoto, Japan) studies 14.

Stability Study: The accelerated stability testing study of the optimized transdermal patch was performed for 6 months, according to the ICH guidelines 15. Adequate replicates of the optimized patch were composed and stability study was carried out at temperatures of 40 ± 2 ºC and 75 ± 5% Rh for six months. Samples were withdrawn at an interval of 1, 3 and 6 months and drug content, flux, and peel strength analyzed for the stability samples and results were compared with freshly prepared patches 16.

The theoretically required flux for Clozapine as calculated from the above equation was found 97.95 µg/h/cm2 which considered as ~100 µg/h/cm2. The permeation rate is necessary for attaining the adequate plasma concentrations of the drug. Initially, for the screening of PSA, batches were prepared with 15% drug loading. This factor was kept constant to assess the impact of adhesive on drug permeation.

TABLE 1: SELECTION OF PSA BASED ON THEIR PHYSICOCHEMICAL PROPERTIES

Here all above mentioned PSAs having no functional groups attribute that acrylate adhesives are having higher flux than polyisobutylene and silicon adhesives.

Now in case of DT-387-2353, DT-387-2852 and DT-387-2052 acrylate adhesives with –COOH (Carboxyl acid) functional group the flux was found to be 8.16 ± 2.19 µg/h/cm2, 10.31 ± 1.46 µg/h/cm2 and 11.26 ± 1.11 µg/h/cm2 respectively. Hence the flux found highest with –OH functional group was might be due to its characteristic of reducing the drug-tissue binding by occupying hydrogen bonding sites and giving the solvating effect of alpha-keratinin within corneocytes which leads to the marginal increase in lipid fluidity and hence the drug permeability.

So, it improves the solubility of the drug within stratum corneum and resulting in increased drug partition into the skin.

According to literature peel strength, less than 300 cN cm-1 leads to poor adhesion, as shown in results peel strength was found greater than the mentioned criteria for all the adhesives. So, based on the result and discussion DT-387-2510 was selected for further studies. 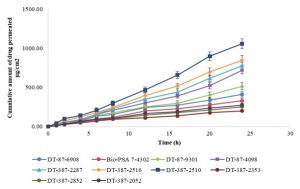 Optimization of Drug Loading: To determine the optimum concentration of clozapine, different batches A1 to A4 prepared with drug loading in a range of 10% - 30% to check its impact on skin permeation. It was depicted from the results that Table 3 as the concentration of drug increases from 10% to 20% skin permeation increases from 35.30 ± 0.79 µg/h/cm2 to 53.74 ± 1.41 µg/h/cm2. This was the effect due to the higher concentration gradient of the drug which may create reservoirs in the skin and from where permeate the drug. Flux was comparable for batches A3 and A4 Fig. 2 which were due to the saturation of the skin beyond the threshold concentration of the drug. Hence, 20% drug loading was found to be optimum. As shown in the results, it can also be inferred that as the drug concentration increases PSA concentration decreases and hence the peel strength of the patch also decreases.

The values of flux in the presence of permeation enhancers were found in following decreasing order: Oleic acid >IPM > Azone > D-limonene > 1, 8 Cineole. The above results were ascribed to the lipophilic character of the permeation enhancers 19. Oleic acid is a lipophilic fatty acid 20 with the log P value of 7.7 21. Hence, OA promotes the partitioning of clozapine into the acceptor phase. Moreover, OA acts by disrupting the lipid bilayer and hence increase the drug flux while IPM fluidizes the stratum corneum lipids and thereby enhancing flux 17. IPM Log p-value is 7.17 22 while for azone log p-value is 6.2 23. Azones are non-interactive with the proteins; they get directly partitioned into the bilayer of lipid and by disrupting it they make the lipid layer more flexible 5.1,8-cineole disrupts the bilipid structure of subcutaneous layer 24 while D-limonene extracts the lipid from subcutaneous layer and thereby enhance the penetration 25. It was reported that the terpenes with higher polarity are more potent enhancers for hydrophilic drugs whereas non-polar terpenes are better enhancers for lipophilic drugs 26. log p-value of 1,8-cineole was found to be 2.82 ± 0.25. On the contrary, D-limonene is a non-polar (hydrocarbon) terpene with a log p-value of 4.58 ± 0.23 27. So, based on the above findings OA was selected as the best suitable permeation enhancer for further studies and its effect on flux evaluated at different concentrations.

Effect of Permeation Enhancer Concentration: Permeation enhancer concentration plays a very important role in the permeation of the drug. Batches D1 to D3 were formulated by differing amounts of OA in range of 10%, 15% and 20% (of dry polymer weight) respectively. The flux value of clozapine (µg/h/cm2) for batch D1 was found to be 90.84 ± 1.48 µg/h/cm2 while for batches D2 and D3 was found to be 109.59 ± 1.59 µg/h/cm2 and 113.69 ± 1.74 µg/h/cm2 respectively Table 5. The rate of permeation of the drug increased with increasing the concentration of OA, reaching a maximum of 20% Fig. 4. Permeation rate obtained with 15% and 20% concentration of OA was comparable and no noteworthy difference was found 28. Hence formulation D2 was evaluated for further characterization. 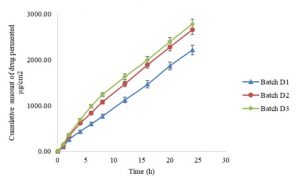 In IR spectrum of Clozapine Fig. 5, the absorption at 3296.71 cm-1 was assigned to the stretching vibration of N-H group which was red-shifted to the wave number of 3292.25 cm-1 and 3291.16 cm-1 for clozapine physical mixture and clozapine formulation 30 and hence that red shift was attributed as a criterion for intermolecular hydrogen bonding 31.

DSC Studies: The thermogram of pure clozapine exerted a sharp endothermic peak at 188.59 ºC, corresponding to the melting point of clozapine Fig. 6. The major peak of clozapine disappeared from the DSC thermogram of optimized formulation, which was due to the homogenous dispersion of the drug in the PSA matrix 32. 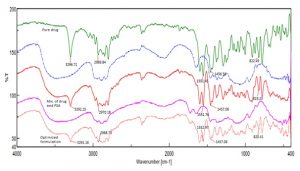 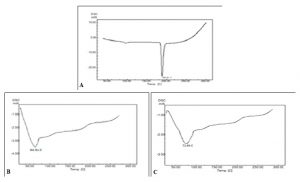 FIG. 6: DSC CURVE FOR (A) PURE DRUG, (B) PHYSICAL MIXTURE OF DRUG AND PSA AND (C) CLOZAPINE TRANSDERMAL PATCH

Stability Study: This is necessary for the evaluation of transdermal patches during the storage. The results revealed no changes in the physical appearance of the formulation after six months. The % drug content was found to be 98.76 ± 0.37% after six months, while peel strength and flux were found 405 ± 3.15 cN/cm and 104.89 ± 1.43 µg/h/cm2 respectively. The above results were insignificant (p > 0.05) when compared with the results of fresh patches Table 6. From the above findings, it was inferred that there was no drug crystallization observed even after six months.

CONCLUSION: Clozapine transdermal patch was formulated using pressure sensitive adhesives along with permeation enhancers to provide the sustained release of the drug with better permeation rate and hence the bioavailability as compared to the marketed formulation. Hence, the developed clozapine PSA patch proves to be a better alternative to conventional dosage forms and can be utilized in schizophrenics with improved patient compliance with reduced dosage frequency.

ACKNOWLEDGEMENT: We acknowledge that the funding of this research came from the self-financing of the authors and the authors are grateful to Amneal Pharmaceutical Pvt. Ltd., Ahmedabad for rendering generous support to carry out the research work. The authors are thankful to the Institute of Pharmacy, Nirma University, Ahmedabad, Gujarat, India for providing the necessary facilities to generate the manuscript that is a part of Doctor of Philosophy (Ph.D.) research work of Mr. Milan Agrawal to be submitted to Nirma University, Ahmedabad, India.

CONFLICTS OF INTEREST: The authors report no conflicts of interest.