ABSTRACT: The main objective of present work was to formulate and evaluate swellable controlled porosity osmotic tablets of Acyclovir for the treatment of herpes simplex. This formulation aims to release the drug in zero order pattern, increase bioavailability, reduce frequency of drug dosing and hence increased patient compliance. Acyclovir is a synthetic purine nucleoside analogue that is specially activated by Herpes Simplex Virus (HSV) induced thymidine kinase, and inhibits viral DNA polymerases as well as acting as a chain terminator. The technique used for the preparation of tablets was direct compression followed by deep coating of core tablets and total nine formulations (F1-F9) were prepared. Prior to compression, the prepared granules were evaluated for flow and compression characteristics. Prepared osmotic drug delivery system was also evaluated for in vitro drug release study. In vitro release profile of all formulations was in range from 54.12-99.85%. The formulation F2 was best amongst all and showed 56.58% drug release in 12 hr and 98.92% in 24 hrs. Zero order drug release kinetics was shown by formulation F2 at 0-24 hr which is require for enhance bioavailability of acyclovir. Further, among coated formulations (C1-C8), C7 showed sufficient strength and formed smooth surface. The coating did not show any leakage and was stable during dissolution of tablet.  The % weight gain of coated tablet was found to be in range 1.98-2.40%. The thickness of semipermeable membrane was 240 μm and membrane withstands the pressure during the dissolution. The surface morphology of the coating membrane was examined using Scanning Electron Microscopy after dissolution and showing pore formation in membrane. Accelerated stability studies were conducted for optimized formulation as per specified ICH guidelines for one month. Formulations were found to be stable for one month when tested for drug content as well as in vitro dissolution studies.

INTRODUCTION:Conventional drug delivery systems have little or no control over the drug release, and effective concentration at the target site. This kind of dosing pattern may result in constantly changing, unpredictable plasma concentrations.

Conventional preparation is usually administered two or three times a day, which leads to large fluctuation in drug plasma concentration and side effects on human body. Constant plasma level, can offer a therapeutic advantage for many drugs in terms of both efficacy and tolerance of the treatment. Once-daily controlled release preparation is often desirable 1-3.

Development of oral controlled release dosage forms of a given drug involves optimization of the dosage form characteristics within the inherited constraints of the gastrointestinal physiology.

Controlled release delivery systems have added advantages over immediate release dosage form. These include reduction of dosing frequency by administering the drug once or twice a day. Since the frequency of drug administration is reduced, patient compliance can be improved, and drug administration can be more convenient due to reduction of gastrointestinal side effects. These also cause less fluctuations of plasma drug level and lead to more uniform drug effect and lesser total dose 4-6.

Drug delivery from these systems, to a large extent, is independent of the physiological factors of the gastrointestinal tract and these systems can be utilized for systemic as well as targeted drug delivery of drugs. The release of drug(s) from osmotic systems is governed by various formulation factors such as solubility and osmotic pressure of the core component(s), size of the delivery orifice, and nature of the rate-controlling membrane. By optimizing formulation and processing factors, it is possible to develop osmotic systems to deliver drugs of diverse nature at a pre-programmed rate 8.

Acyclovir is a synthetic purine nucleoside analogue with in vitro and in vivo inhibitory activity against human herpes viruses, including herpes simplex virus (HSV) types 1 and 2 Varicella zoster virus (VZV), Epstein Barr virus (EBV) and Cytomegalovirus. The inhibitory activity of acyclovir for HSV 1 and HSV 2, VZV, EBV and CMV is highly selective. The enzyme thymidine kinase (TK) of normal, non-infected cells does not use acyclovir effectively as a substrate, hence toxicity to mammalian host cells is low; however, TK encoded by HSV, VZV and EBV converts acyclovir to acyclovir monophosphate, a nucleoside analogue which is further converted to the diphosphate and finally to the triphosphate by cellular enzymes. Acyclovir triphosphate interferes with the viral DNA polymerase and inhibits viral DNA replication with resultant chain termination following its incorporation into the viral DNA 9.

Thus, there is a strong clinical need and market potential for a dosage form that will deliver acyclovir in a controlled manner to a, thereby resulting in a better patient compliance. The present study was aimed towards the development of controlled release formulations of acyclovir based on osmotic technology.

Different formulation variables were studied and optimized to achieve the desired release profile. The manufacturing procedure was standardized and the stability of the formulation was evaluated after one month of storage at accelerated stability conditions.

Formulation of Acyclovir Core Tablet: The core tablets of acyclovir were  prepared  by direct compression method using varied concentrations of osmogen (potassium chloride) and polymer Hydroxypropyl methyl cellulose LV 50 (HPMC LV 50). The drug and excipient were passed through sieve no.40. All ingredients were mixed in pestle mortar.

Magnesium stearate and talc were passed through sieve no. 80 mixed and blend with initial mixture. The powder blend was compressed into rotary tablet punching machine. The ingredients with their function are enlisted in table 1 and the composition of the core tablet formulation is enlisted in table 2.

All the weight expressed in mg

Coating of Acyclovir Core Osmotic Tablet: The coating solution was prepared by dissolving 2 gm Cellulose acetate in 100ml Acetone, Isopropyl alcohol and 2% w/v solution of cellulose acetate was prepared. The plasticizer (dibutylphthalate) and flux regulator (PEG 400) were added in solution. Finally pore forming agent (Sorbitol) was added and solution was stirred for 15 min.

Coating Method: The Tablets were warmed in an oven for 15 min at 45±0.5ºC and were further used for coating. Tablet coating was applied using a dip-coating process/pan coating. The tablets were dip coated in polymer solutions consisting of cellulose acetate dissolved in a mixture of acetone and isopropyl alcohol containing pore forming agent and plasticizer. After coating, the tablets were dried over night at 40ºC to remove residual solvent. The ingredients with their function are enlisted in table 3 and composition of coating formulation is enlisted in table 4.

TABLE 3: FORMULATION DESIGN OF THE COATING OF TABLET 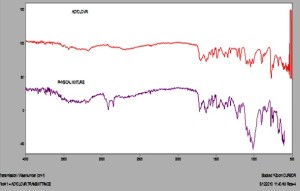 FIGURE 1: COMPARISON OF FTIR PEAKS OF DRUG AND PHYSICAL MIXTURE OF DRUG

Micromeritic Evaluation: The micromeritic properties of powder blend is shown in Table 5. The powder showed improved flowability, good compressibility of powder as observed from the values of angle of repose (25.21–28.18 0) and Compressibility Index (15.2-21.8%) respectively15.

Hardness: The hardness was found to be in range 5.3-6.1 kg/cm2 which were found to be satisfactory for direct compression.

Friability: Friability of all batches was in range of 0.45 to 0.61% which is in accordance to IP limit of less than 1%. This was found to be satisfactory.

Weight Variation: Mean of weight variation of twenty tablets from each formulation were taken and found to be in accordance with IP.

Uniformity of Content: Uniformity of drug content of all batches was in range of 98.96 to 99.74% which was within the acceptable limits.

Coated Tablet: Out of total coating formulations, C7 has sufficient strength and smooth surface. The coating did not show any leakage and was stable during dissolution of tablet. The table 7 shows the data of percentage weight gain of coated tablet.

In-vitro Dissolution Study: Dissolution study was carried out on all formulations using USP apparatus in 900 ml of 0.1N HCl (pH 1.2) for the first two hrs and then using PBS (pH 6.8) maintained at 37±0.5oC at a speed of 50 rpm. Samples of dissolution medium were withdrawn after regular time intervals and were replaced with equal volume of fresh medium. The samples were filtered and analyzed for drug release by measuring the absorbance at 253 nm after suitable dilution with 0.1 HCl and phosphate buffer (pH 6.8). The comparative percentage cumulative drug release shows that the formulation F2 shows optimum drug release at required time duration among all the formulations. Dissolution data of coated tablets is shown in figure 2 and table 8 shows dissolution release profile of all formulations. Formulation F2 showed drug release at 24 hr and regression factor is 0.991. Table 9 shows regression data of all formulations.

All the value are expressed as mean ±S.D, n=3

Thickness of Film: After completion of dissolution, the film was isolated from the tablets and dried at 40oC for 1 hr. the thickness of semipermeable membrane was 240 μm and membrane withstand the Pressure during the dissolution. Figure 3 shows the coating thickness. 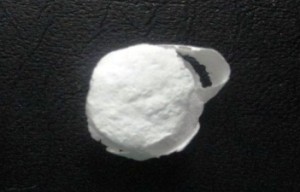 FIGURE 3: LAYER OF COATING AFTER DISSOLUTION

Stability Study of Optimized Formulation (F2+C7): The prepared tablets were evaluated for Hardness, Weight variation, Thickness, film thickness, uniform weight gain and in vitro release profile. Overall results indicate that formulation F2+C7 is the better in all preparation and satisfies all the criteria as an osmotic tablet.

The accelerated stability study of optimized formulation was performed as per ICH (International Conference of Harmonization) guidelines at 40oC and 75% RH for one month. The results of stability studies in table 10 reveal that general appearance, hardness, content of active ingredient all the parameter were in acceptable range. 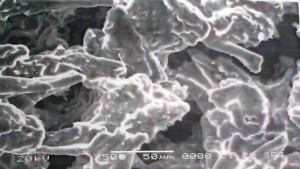 CONCLUSION: In the present work, swellable controlled porosity osmotic tablet of acyclovir was successfully formulated by direct compression technique. Out of total nine formulations the formulation F2 showed the best results as compared to other batches.

The formulation F2 showed 56.58% drug release at 12 hr and 98.92 drug releases at 24 hr and coating formulation C7 has sufficient strength and form smooth surface. The coating was not leakage and stable during dissolution of tablet. % weight gain of coated tablet and comply with the requirements for controlled release formulations.

ACKNOWLEDGEMENT: The authors are thankful to Acrolab, Bangalore, for providing facilities to carry out the Research work.