ABSTRACT: In the recent days targeted drug delivery has gained more prominence for various advantages like site specific delivery and controlled release from the formulations. Amongst the plethora of avenues explored for targeted drug delivery, bioadhesive nanoparticles backed foremost attention offering local drug delivery and controlled drug release solving problems like tissue damage and drug wastage. Formulating nanoparticles with mucoadhesive polymers may provide a significant increase in the gastrointestinal residence time. Neostigmine bromide is a cholinesterase inhibitor used for the treatment of Myasthenia Gravis and is given by conventional routes like oral and intra venous. Bioadhesive nanoparticles of Neostigmine Bromide using synthetic and semi synthetic polymers like Carbopol, HPMC and ethyl cellulose were prepared by emulsification solvent evaporation method. The nanoparticles were characterized for their preformulation and post formulation parameters like compatibility, particle size, zeta potential, encapsulation efficiency, surface morphology, in vitro mucoadhesion, in vivo bioavailability, drug release and stability studies. Out of six, formulations F1 and F4 showed the best results for different evaluated parameters of nanoparticles. Entrapment efficiency was found to be within the range of 66.37% and 94.82%. Percentage mucoadhesion was within the range of 71.38% and 99.41%. In vitro dissolution was carried out for 10 hours and the percentage drug release for all the formulations were in the range of 98.93% and 89.71%. In vitro studies conclude that carbopol based nanoparticles are better than HPMC based nanoparticles for the delivery of Neostigmine Bromide. In vivo studies showed that the formulations F1 and F4 showed promising bioavailability compared to orally administered tablet.

INTRODUCTION: Oral route is considered as the most preferred and convenient method of drug administration because of its ease of administration. However, its use has become limited because of its disadvantages like less residence time in the GIT and first pass hepatic metabolism. Therefore it led to a research on other possibilities of enhancing the residence time of the dosage form in GIT.

Bioadhesive drug delivery systems are the systems which utilize the property of mucoadhesion of certain polymers, which become adhesive on hydration and hence can be used for targeting a drug to a particular region of the body for extended period of time.1

Nanoparticles are defined as particulate dispersions of solid particles with a size range of 10-1000 nm. Nanoparticulate dosage forms made from the naturally occurring biodegradable polymers have attracted considerable attention for several years in sustained drug delivery. However, the success of these nanoparticles is limited due to the short residence time at the site of absorption. It would therefore advantageous to have means for providing an intimate contact of the drug delivery system with the absorbing membranes. This can be achieved by coupling bioadhesion characteristics to nanoparticles and developing bioadhesive nanoparticulate carriers.2, 3

To overcome inherent drawbacks associated with conventional dosage forms of Neostigmine Bromide, an attempt is being made to develop an alternative drug delivery system in the form of bioadhesive nanoparticles.

Formulation of Nanoparticles: Emulsification-Solvent Evaporation Method: Required amount of ethyl cellulose and mucoadhesive polymer is dissolved in 20 ml of ethanol for carbopol nanoparticles or a mixture of ethanol and dichloromethane (1:1) for HPMC nanoparticles using magnetic stirrer. Weighed amount of Neostigmine Bromide was added to the polymeric solution under magnetic stirring. Then the suspension was quickly injected into 120 ml of light liquid paraffin containing 2.5% (v /v) of Span 80, while stirring at a speed of 10000 rpm for 1 min to form a w/o emulsion. Stirring speed was then lowered and continued for 2h at room temperature until nanoparticles were formed. The residue was washed 2-3 times with 50 ml portions of n-hexane. The product was then dried for 24h at room temperature.6, 7

The particle size of the prepared nanoparticles was determined by the method of dynamic light scattering, using a Malvern system. It is done at a temperature of 25.0 ± 0.1º C with a measuring angle of 90º to the incident beam.

The weight of the prepared nanoparticles was divided by total amount of all non-volatile components which were used for the preparation. Percentage yield can be calculated using the formula

The zeta-potential of bioadhesive nanoparticles was determined by laser doppler anemometry using a Malvern Zetasizer. All the measurements were performed at 25 ± 0.10º C.

Encapsulation Efficiency (EE) was calculated as:19

A small portion of the sheep intestinal mucosa was mounted on a glass slide which is placed at an angle of 45º. Then weighed amount of nanoparticles were sprinkled onto the mucosa and kept for 15 min. Then Phosphate buffer solution pH 6.4 is allowed to flow over the nanoparticles. All the washings were collected at different time intervals and the weight of washed out nanoparticles was determined. Percentage mucoadhesion was then calculated by using the formula:

Nanoparticles equivalent to 100 mg of Neostigmine Bromide was placed in a cellulose dialysis bag sealed at both ends. The dialysis bag was dipped into the receptor compartment containing the dissolution medium, which was stirred continuously at 100 rpm maintained at 37°C. 2 ml sample was withdrawn at appropriate time intervals and absorbance of the resulting solution was measured at 261 nm in a double-beam UV spectrophotometer using the dissolution medium as blank.

In vivo bioavailability studies were carried out on six healthy rabbits which were divided into three groups. All the groups were fasted for 24 hours. Then appropriate amount of dose was calculated and one batch was fed with the oral conventional preparation of tablet while one batch with F1 and the other with F4. Blood samples were collected from marginal ear vein at regular intervals of time after the drug administration. Finally blood samples were centrifuged for 15 min and the obtained plasma is stored at -20 °C for further analysis using HPLC chromatography.

Out of six formulations, F1 and F4 were evaluated for stability studies. These two formulations were divided into 2 sets and stored at 4 ± 1○C; 25± 2○C and 60 ± 5% RH; 37± 2○C and 65 ± 5% RH. After 30 days, the drug release of the above formulations was determined by in vitro drug release method explained in the earlier parts

IR Studies: The physical mixtures of the polymers and drug showed identical spectrum with respect to the spectrum of the pure drug, indicating there is no chemical interaction between the drug molecule and polymers used. (Fig. 1-6) 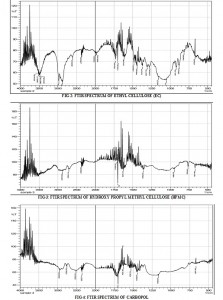 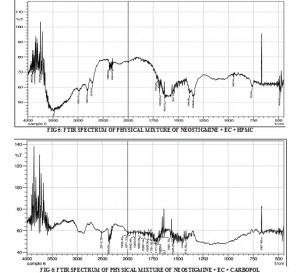 Particle Size: With decrease in the mucoadhesive polymer concentration, the particle size of the nanoparticles decreased significantly and was in the range of 362.12 nm to 489.03 nm. 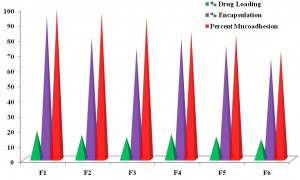 Scanning electron microscopic pictures indicated that the nanoparticles were spherical with a smooth surface (Fig. 8). 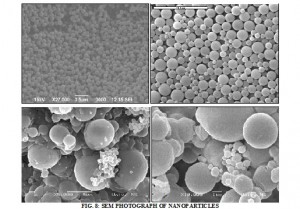 In vitro release studies: The in vitro release studies of nanoparticles were carried out for a period of 10 hours in phosphate buffer of pH 7.4 as a dissolution medium. The percentage drug release for F1, F2, F3, F4, F5 and F6 were found to be 98.93%, 95.69%, 92.34%, 94.81%, 93.12% and 89.71% at the end of 10th hour (Table 3 & Fig 9). It was clear from the dissolution data that as the concentration of mucoadhesive polymer increased, the drug release also increased proportionally. The greater release of drug from carbopol nanoparticles than HPMC nanoparticles can be attributed to their higher degree of swelling which facilitates water penetration into the nanoparticles.

HPLC chromatogram showed the presence of drug in the collected plasma at regular intervals (Fig. 10 and 11). The plasma concentration of the drug at each sampling interval for tablet and both bioadhesive nanoparticles showed characteristic differences in their pharmacokinetic parameters. The Cmax was found to be 58.98 ng/ml, 97.43 ng/ml and 93.09 ng/ml for tablet and bioadhesive nanoparticles (F1 & F4) at corresponding Tmax of 1.5, 2 and 2 hours respectively. After reaching Cmax, the nanoparticulate formulations showed a better controlled release formulation up to 8 hours (Table 4, 5 and Fig. 12). 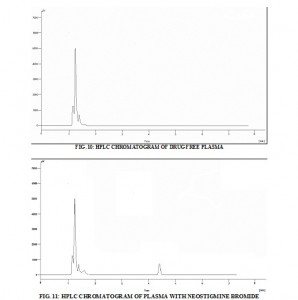 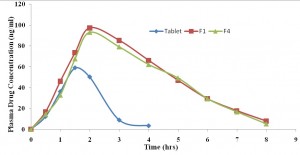 CONCLUSION: By studying all the experimental results bioadhesive nanoparticles encapsulated with Neostigmine bromide can be successfully formulated by Emulsification solvent evaporation method. All the formulations showed optimum results of which formulation containing higher concentration of carbopol showed the best results in all the evaluated parameters. Thus F1 can be concluded as the ideal batch of formulation. From the In vivo bioavailability studies, the relative bioavailability of Neostigmine Bromide was found to be greater than that of conventional dosage form of tablets. From these results it can be inferred that the oral bioavailability of Neostigmine Bromide was significantly increased by formulating it in the form of bioadhesive nanoparticles. Finally it can be concluded that the formulated Neostigmine bromide nanoparticles can be considered as the potential candidate for the symptomatic treatment of Myasthenia Gravis through gastrointestinal route.