The aim of present study was to determine whether pharmaceutical and pharmacological activity of aspirin would enhance in form of inclusion complex with β–cyclodextrin or not.Aspirin (Acetyl salicylic acid) a non steroidal anti-inflammatory drug, was formulated in to inclusion complex with β–cyclodextrin (β–CD) by solvent evaporation. The phase-solubility curve was AL type and Kst was found to be 127.8 M-1. FT-IR and microscopic examinatinos were revealed confirmation of inclusion formation. Solubility and permeability of aspirin was enhanced in presence of β–CD. Similarly the pharmacological activity i.e. analgesic and anti-inflammatory activity were also enhanced in presence of β – CD.

INTRODUCTION: Cyclodextrins (CDs) are cylindrical oligosaccharides with a lipophilic central cavity and hydrophilic outer surface. In aqueous solutions, CDs are able to form inclusion complexes with many drugs by taking up some lipophilic part of the drug molecules into cavity 1. When used in pharmaceutical formulations, they can improve the aqueous solubility, stability, dissolution rate, bioavailability and/or local tolerance of drugs 2, 3.

Cyclodextrin inclusion is a molecular phenomenon in which usually only one guest molecule interacts with the cavity of a cyclodextrin molecule to become entrapped and form a stable association. The internal surface of cavity is hydrophobic and external is hydrophilic; this is due to the arrangement of hydroxyl group within the molecule. Cyclodextrin is to enhance aqueous solubility of drugs through inclusion complexation 4-6.

Acetylsalicylic acid (Aspirin) used for anti-inflammatory property and it is also an anti-pyretic drug. It acts by inhibition of prostaglandin synthesis and COX-II inhibitor. Aspirin induces a long-lasting functional defect in platelets. Orally administered aspirin requires high and frequent dosing because it undergoes extensive pre-systemic metabolism. Also, long term and chronic oral aspirin is associated with serious gastrointestinal side-effects 7.  So, if the solubility and bioavailability of the aspirin can be increased, it will reduce the gastrointestinal side-effects. Preparation of aspirin β -cyclodextrin inclusion complexes was to increase the solubility and reduce the irritation.

The aim of a present study was to compare solubility and permeability of aspirin alone, in physical mixture with β-Cyclodextrin (β -CD) and in inclusion complex with β –CD.

Methods: Characterization of aspirin and β –CD were carried out. For that Particle size, FT-IR, Solubility and melting point determinations were performed for Aspirin. Similarly for β–CD FT-IR, solubility and LOD were performed. It was compared with certificate of analysis.

i.      Analgesic activity: The mice (Swiss Albino mice, Female from Haffkine Institute, Lower Parel) were grouped and acclimatized.  Different groups of the mice received either water, Std. Aspirin, Aspirin-β cyclodextrin complex each containing a dose of Aspirin equivalent to 30 mg/kg, 45 minutes before the intraperitoneal injection of 0.1 ml of 0.6% solution of acetic acid I.P. The mice were observed for 5, 10, 15, 20, 25 minutes in individual chambers and the number of writhings were calculated.

Increase in Paw Thickness in control

RESULT AND DISCUSSION: Aspirin was white crystalline powder having higher solubility in ethanol and methanol, soluble in chloroform and pH 4.5 acetate buffer. Melting point was found to be 132 – 134°C. Mean particle size was found to be 130 µ. Its particle size distribution is represented in figure 2. From the IR spectra, structure of Aspirin was confirmed (Table 1). It was compared with IR spectra given in IP 2010.

FIGURE 2: %FREQUENCY VS PARTICLE SIZE OF ASPIRIN IN MICRONS

Microscopic examination represented in figure 6. From which inclusion can be observed. 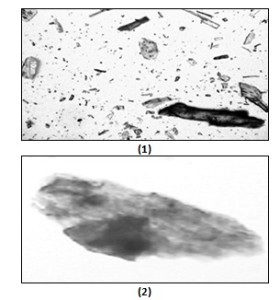 FIGURE 6: MICROSCOPIC EXAMINATION OF; 1) PHYSICAL MIXTURE OF ASPIRIN AND β–CD; 2) INCLUSION COMPLEX OF IT

Inclusion complex of ASP + β –CD has shown higher solubility. FTIR studies showed that Peak of Aspirin at 2287, 1575 cm-1 were disappeared and the peak at 1448 cm-1 shifted to 1458 cm-1 in case of Inclusion Complex. Release of aspirin from inclusion complex is higher as compare to aspirin alone. So we can say that permeability of aspirin can be enhanced in presence of β–CD

CONCLUSION: From the characterization formation of inclusion complex was confirmed. Permeability and solubility of aspirin was enhanced in inclusion form. Similar behaviour was observed for pharmacological activity those are analgesic and anti-inflammatory.