INTRODUCTION: Oral conventional (immediate release) drug products (solid or liquid) such as tablets, capsules and suspensions are formulated to release the active drug immediately after oral administration. In the formulation of conventional drug products no effort was made to modify the drug release rate.

Immediate-release products generally result in relatively rapid drug absorption and onset of action but in conventional oral drug products that  containing  poorly water- soluble drug (lipophilic drug), the drug absorption may be gradual due to slow dissolution rate  or selective absorption across the gastrointestinal tract, that  result in a delayed onset time 1. According to the biopharmaceutics classification system (BCS), the class II includes the drugs that have low solubility and high permeability. Many drugs belong to this class show low bioavailability due to poor solubility and insufficient dissolution process 2. In order to improve the bioavailability of drugs that belong for class II and obtain a good clinical efficacy, the solubility of these drugs must be improved and this can be achieved by using several techniques such as particle size reduction, pH adjustment, solid dispersion, self-emulsification, co-solvency and modern technique which is nanotechnology 3. Nimodipine is a 1,4-dihydropyridine calcium channel blocker, its chemical name was [2,6-Dimethyl-4-(3'-nitrophenyl)-1,4-dihydropyridine-3,5-dicarboxylic acid 3-beta-methoxyethyl ester 5-isopropyl ester]. Used for the improvement of neurological outcome by reducing the incidence and severity of ischemic deficits in patients with subarachnoid hemorrhage from ruptured congenital aneurysms 4.

According to biopharmaceutics classification system (BSC), its belong for class II (low solubility – high permeability). Bioavailability is about (3-30%) following oral administration due to low water solubility and extensive first-pass metabolism via CYP 3A4 in the liver. Nanoemulsion defined as an advance drug delivery system that has a great attention in the delivery of drugs, biological active agents and genetic materials which have a problem in their release 5. Nanoemulsion is a colloidal dispersions composed of an oil that emulsified in aqueous phase surfactant and co surfactant at appropriate ratio. Its isotrpically clear possess a good thermodynamic and kinetic stability. Nanoemulsion present as an  oil in water (o/w) in which the oil droplets dispersed in external aqueous phase , water in oil (w/o) in which the water droplets dispersed in external oil phase and bicontinuous nanoemulsions, in which the  micro domains of oil and water are inter dispersed within the system 6 .

Kunal Jain et al. Develop oral nanoemulsion of atorvastatin, pharmacokinetic studies showed that  the absorption  of atorvastatin from nanoemulsion resulted  in  2.87 and 2.38- fold increase in relative bioavailability as compared to conventional tablet and pure drug suspension respectively 7 . Tran TH, Guo Y, Song D, Bruno RS, Lu X. Prepared self-nanoemulsifying drug delivery system of quercetin. They found that the maximum concentration of plasma quercetin for optimized SNEDDS increased by three fold compared with the quercetin control suspension 8. So, the aim of this study is to develop oil in water (o/w) nanoemulsion of nimodipine employed for oral use in order to increase nimodipine solubility for enhancing its oral bioavailability.

Solubility study for screening of components:  The solubility of nimodipine was determined in various oils which are (castor oil, olive oil, liquid paraffin, oleic acid and isopropyl myristate), surfactants which are (tween 20 and tween 80) and co-surfactants which are (poly ethylene glycol 400 and propylene glycol). Excess amount of nimodipine powder was added to 2ml of each oil, surfactant and co- surfactant that   contained in small plain tubes. Then these tubes were tightly closed and placed in an isothermal shaker water bath   at 25 ± 0.5 0C for 72 hr. After this time the samples were centrifuged at 3000 rpm for 20 min, then the supernatant layer for each sample filtered by using filter membrane (0.45 µm). After filtration the samples diluted with methanol and the solubility determined at λ max 238nm by using UV- visible spectrophotometer and the measurement was done in triplicate 9.

Construction of pseudo- ternary phase diagrams: The components of pseudo- ternary phase diagrams  include  oil , mixture of surfactant and co- surfactant (S mix) and deionized  water  were developed  using  aqueous titration method.  Surfactant and co- surfactant were mixed in different weight ratios (1:1, 1:2, 2:1, 3:1). For each phase diagram, the oil and S mix ratio were blended in different weight ratios until maximum ratio of oil and S mix was obtained. Twenty three different combinations of oil and S mix were prepared, these combinations were slowly titrated with aqueous phase (deionized water) and visual inspection was made for transparency. The titration of deionized water is stopped when transparent and clear oil in water (o/w) nanoemulsion was produced. No heating used during formulation. The nanoemulsions of pseudo- ternary phase diagram don’t contain drug. These nanoemulsions were subjected for thermodynamic stability tests in order to obtain more stable formulations that employed in preparation of nimodipine nanoemulsions 10.

Screening of prepared nanoemulsion on the basis of thermodynamic stability tests: 11

The thermodynamic stability tests used to assess the physical stability of formulations are:-

Centrifugation test: The formulations of nanoemulsions were centrifuged for 20 min at 3000 rpm and checked for phase separation, creaming or cracking.

Freezing–thawing test: This test was done by exposing the formulations for two different temperatures which are (21oC) and (-21oC) using refrigerator and the time for each temperature not less than 24 hours. This test used to indicate accelerated stability of formulations.

Heating-cooling test: Heating and cooling test was done by keeping the formulations at 40oC and at 0oC by refrigerator. The time for each temperature test should be not less than 48 hours. This test used to indicate the racking effect on the formulations stability.

Preparation of nimodipine loaded nanoemulsion: Nimodipine nanoemulsions was produced by dissolving the quantity of drug in specialized amount of oil. Then the determined quantity of S mix added for oil loaded drug, after that the whole mixture was blended together by vortex mixer. Then the aqueous phase (deionized water) titrated drop by drop to obtain transparent, clear (o/w) nanoemulsion 12.

Drug content estimation: Small volume was taken from the formula of nimodipine loaded nanoemulsion and diluted with methanol. Then the  absorbance measured by using UV- visible spectrophotometer at λmax 238nm and the concentration calculated  by using the equation of methanol calibration curve 16 .

Zeta potential (ZP) measurement: Zeta potential describes the function of the charge on the surface of droplets.  The measurement made by using zeta sizer instrument (nano brook zeta plus), the sample of nimodipine nanoemulsion putted in zeta cuvette and the reading was recorded.

2- In vitro release of nimodipine conventional tablet: The in vitro release of conventional (immediate release) tablet of nimodipine occurs by using dissolution apparatus USP-I (basket method). The tablet putted in the basket and the basket immersed in 900ml of dissolution medium (HCL buffer pH (1.2) +0.5%tween 20). The apparatus set at 37 ± 0.5°C and rotation velocity at 50 rpm for 2 hours. 5ml samples were withdrawn from dissolution medium at regular time interval (15, 30, 45, 60, 75 minutes) and the samples replenished by fresh dissolution medium to maintain sink condition. After 75minutes the release was completed. The samples filtered by using filter membrane (0.45 µm), then analyzed by UV-visible spectrophotometer at 238 nm to determine nimodipine content 20.

Fourier Transformed Infrared Spectroscopy (FTIR): One of the important aspects in prepared nanoemulsions was that no interaction between the components of formulation. The compatibility between drug and all excipients explained by (FTIR) spectroscopy. The study of compatibility by FTIR performed by making spectrums for nimodipine (pure powdered drug) using KBR disk, for nimodipine nanoemulsions using cuvette specialized for liquid samples 22. 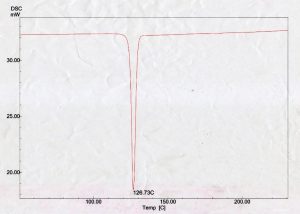 Construction of pseudo-ternary phase diagrams: The components of pseudo-ternary phase plot are oil, water and S mix (surfactant /co surfactant) which considered as variable component due to that it presents in different  ratio such as 1:1, 1:2, 2:1 and 3:1  as shown in Fig.2-5. The shaded area represent the area of nanoemulsion and the larger shaded area indicates a good nanoemulsifying activity. 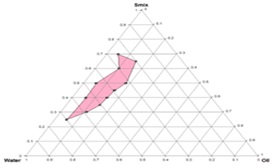 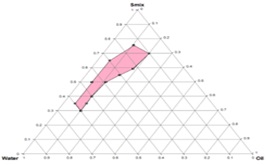 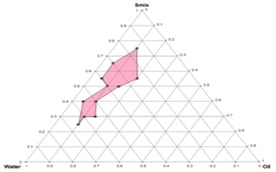 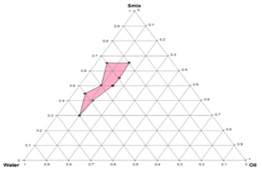 Depending on the results of thermodynamic stability tests that explained in the Table 2.  And keeping in mind  high percentage of water, low percentage  of S mix and different S mix ratio of  formulations,  nine formulas were  selected which are  F-1(NE1) , F-2(NE2) , F-6(NE3), F-7 (NE4), F-11(NE5), F-12(NE6), F-13(NE7), F-18(NE8), F-19(NE9) for preparation of nimodipine loaded  nanoemulsions  and these nanoemulsions were subjected for characterization.

nanoemulsions prepared by dissolving 0.6 gram of nimodipine in the specialized quantities of oil and S mix of selected formulations to prepare a formula of 100 gram. These nanoemulsions were stored in tight glass containers for characterization study.

Analysis of results of characteristics (droplet size, PDI, pH and %T) for nimodipine loaded nanoemulsions explains that the droplets size was decrease with increase the S mix ratio specially for 1:1 (NE1, NE 2), 2:1 (NE 5, NE 6, NE 7) and 3:1(NE 8, NE 9). Analysis of variance indicates that there was significant correlations between the droplet size of these nanoemulsions and % (w/w) of S mix (P<0.05). But in S mix ratio 1:2 , the droplets size don’t decrease due to  low amount of  surfactant (tween20) that presents in the formulations 27.

Zeta potential (ZP) Measurement: Zeta potential is the term that used to explain the electro kinetic potential in colloidal  dispersions. The results of zeta potential of nimodipine nanoemulsions were in range (- 17.8mV to – 45.6 mV). Rule of thumb explains the values of zeta potential which are: range -5 mV to +5 mV indicate fast aggregation, about -20 mV or +20 mV provide short term stability, above +30 mV or below -30 mV indicate a good stability and above +60 mV or below -60 mV offers excellent stability30. This applied for electric stabilization and surfactant with low molecular weight, but in case of surfactant with large molecular weight such as non ionic surfactant (tween 20) provides additional steric stability for the formulations.

Electrical Conductivity Measurement: The results of electrical conductivity of nimodipine loaded nanoemulsions were found to be in range (0.18 - 0.28 m S/cm). This explains that the continuous phase of system was water and the type of formulated nanoemulsion was oil in water (o/w) nanoemulsion. 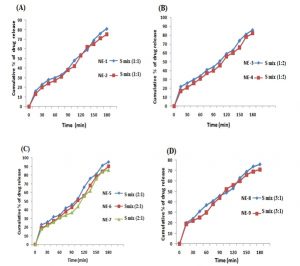 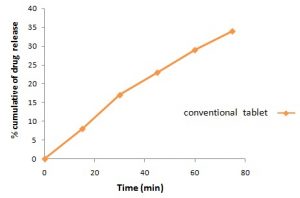 TABLE 4:  VALUES OF REGRESSION COEFFICIENT (R2) AND THE VALUES OF DIFFUSION EXPONENT (n).

Selection of optimized formula of nimodipine nanoemulsions: After study the characterization of prepared nimodipine nanoemulsions. There was an indication that the (NE5) is the optimized formula, because its characterized by good droplet size range (50-81.2 nm) as in the Fig. 8. Low PDI (0.010), best pH value for oral use (6.51), good percent transmittance (97.96%), percent of drug content was higher (98.9), higher zeta- potential (-45.6) as shown in the figure 9. Effective electrical conductivity (0.28mS/cm), accepted viscosity range for oral use (40.012- 40.834 m Pa.s) and higher release of nimodipine from the formula.

These peaks of pure nimodipine appear in spectrum of nimodipine  nanoemulsion as in Fig. 11,  in which also there was broad peak from 2650cm-1 to 3380cm-1, this broad peak belongs to the (OH- stretching of oleic acid) that result from hydrogen bond formation between oleic acid and water. This indicates that there was drug – excipient compatibility between all components of prepared nanoemulsions.

Scanning probe microscopy (SM) study: The results of (SPM) study indicate that the droplets morphology of nimodipine nanoemulsion (NE5) was spherical in shape and the droplets don’t

present in aggregation state as in Fig.12. The droplets size was in nano-scale and similar to the size range that obtained by particle size analyzer ABT-9000 nano laser as in Fig.13.

CONCLUSION: Nanoemulsion considered as an advance technique for improving the bioavailability of poorly water - soluble drugs (lipophilic drugs) that belongs for class II of biopharmaceutics classification system (BCS) by enhancing the solubility and minimizing the first pass metabolism for these drugs. The prepared formula of  (NE5) as ampoule (5gram ) that contain 30mg of nimodipine  can be administrated via oral route for conscious patient  as one ampoule  every six hours. If the patient unconscious, the drug can be administrated by syringe through nasogastric tube (NG tube).

ACKNOWLEDEGEMENT: Authors give thanks and gratitude for the department of pharmaceutics, college of pharmacy, Baghdad University for everything they have done for the completion of research.