FORMULATION AND CHARACTERIZATION OF PARENTERAL IN SITU IMPLANTS OF TARIQUIDAR BIMESYLATE

FORMULATION AND CHARACTERIZATION OF PARENTERAL IN SITU IMPLANTS OF TARIQUIDAR BIMESYLATE

ABSTRACT:  The objective of present study was to formulate and evaluate Tariquidar bimesylate subcutaneous in situ implants in order to minimize the frequency of doses and toxicity and to improve the therapeutic efficacy. The anthranilic acid derivative, tariquidar (XR9576), is a potent and selective P-gp inhibitor being developed clinically for the treatment of multidrug resistant tumors. Tariquidar bimesylate in situ implants were prepared by polymer precipitation method using two different grades of polymer poly (Lactide -co-glycolide) (PLGA) with three different concentrations. The preparation involves dissolving the biodegradable polymer poly (Lactide -co-glycolide) PLGA 85:15 and PLGA 75:25 in N-methyl-2- pyrrolidone. To this solution drug was added and the polymer drug solution was injected in to the aqueous mediato forma solid implant. Based on initial burst release, optimized formulations were selected and evaluated for surface morphology, in vitro drug release and accelerated stability studies. It was observed that the formulations with more polymer concentration and in combination with polyethylene glycol(PEG) and Benzy l benzoate (BB) showed increased entrapment efficiency and exhibited moderate burst release and sustained release for 156 hrs. Release kinetics was calculated for optimized formulations and the formulation F10, F11, F12, F13 followed Higuchi kinetics with nonfickian diffusion. Optimum use of various polymers along with benzyl benzoate and polyethylene glycol can result in better sustained release for Tariquidar bimesylate and can be explored for therapeutic benefit in Multidrug resistant tumors.

The anthranilic acid derivative, tariquidar (XR9576), is a potent and selective third generation P-gp inhibitor being developed clinically for the treatment of multidrug resistant tumors 4, 5. At low concentrations tariquidar restores the sensitivity of many multidrug-resistant human tumor cell lines in vitro by inhibiting Pgp-mediated drug efflux Polymeric drug delivery systems are attractive alternatives to control the release of drug substances to obtain defined blood levels over a specified time 6, 7, 8.

The patients suffer from some disease conditions such as heart disorders, osteoporosis, tumors, and often benefit from such long term drug delivery systems due to improved patient compliance.In-situ implants are advantageous over the microspheres and implants. Microspheres manufacturing process is often complex and difficult to control 9. There are also questions with regard to costs and batch-to-batch product uniformity. In solid implants, they require surgical implantation or the use of large troches to administer the product. Hence the patient compliance is an issue. In situ implants have more patient and physician acceptance related to ease of administration, reliable kinetic profiles and product costs. Injectable in situ forming implants are classified in to five categories, according to their mechanism of depot formation: (1) thermoplastic pastes, (2) in situ cross linked systems, (3) insitu polymer precipitation, (4) thermally induced gelling systems and (5) insitu solidifying organ gels. Of these, in situ polymer precipitation systems have become commercially available so far.

The Solvents commonly used in this approach include N-methyl-2-pyrrolidone, Polyethylene Glycol (PEG-4000), Dimethyl sulfoxide (DMSO) and Benzylbenzoate. The insituforming implant systems have several advantages compared to traditional pre formed implants systems. Due to their injectable nature, implant placement is less invasive and painful for the patient thereby improving compliance.

Currently, only two FDA approved products are in the market utilizing this type of system, Eligard® poly (Lactide-co-glycolide) and Atridox®. Eligard®, using the atrigel delivery system and marketed by Sanofi-aventis in the US (Medigene in Europe),is a subcutaneously injected implant that releases leupraloid acetate over a period of 3 months to suppress testosterone levels for prostate cancer treatment. Atridox® is another ISFI system that also uses the Atrigel delivery systems to deliver the antibiotic agent, Doxycyclin to sub-gingival space to treat periodontal disease. Some disadvantages of in situ implants are high burst release, potential solvent toxicity and high viscosity of the polymeric solution.

The solubility of Tariquidar bimesylate was determined in the solvents Dimethyl sulphoxide, N-Methyl pyrrolidine, Ethanol, Methanol, Water for injection, Dichloromethane, polyethylene glycol and Benzylbenzoate. This was accomplished by adding excess drug Tariquidar bimesylate to each solvent of interest and allowing the mixtures to shake for 24 hours. All the mixtures were then centrifuged, and a known volume of supernatant was removed from each mixture. The amount was determined by using UV-Visible spectrophotometer (PerkinElmer’s) at 240 nm

The solubility of PLGA 50:50, PLGA75:15, PLGA85:15 and PLA was determined from in different solvents such as Dimethyl sulphoxide, N-Methyl 2-pyrrolidone as shown in Table 2.

Method of preparation of implants:

In situ implants of Tariquidar bimesylate were prepared by polymer precipitation method developed by Atrixl® laboratories and is designated as Atrigele technology 7. Different formulations were prepared using 27-33% of polymer PLGA which was dissolved in organic phase containing 1.5 ml N-methyl-2-pyrrolidone in glass vials until a clear solution was formed. To this 25 mg of Tariquidar bimesylate was added. The polymer-drug solution was stirred vigorously (for 2 hrs) until clear solution was formed 8.

This solution was filled in syringes, and gradually injected in to Water for Injection at 370 C with 18 gauge needle for the formation of implants. Within 5-10 minutes solid round implants formed and were evaluated. Various formulations were prepared using 3 different grades of polymers as shown in Table 3. In situ implants formed after injecting into water as shown in Fig 2.

After injecting the drug-polymer solution into water for injection, the container was kept aside until a spherical shaped implant was obtained. Then the solution was replaced with fresh medium. The resultant solution was filtered and analyzed for the free drug content and initial burst release at 240nm by using UV-Visible spectrophotometer.

In vitro drug release studies were performed using dialysis membrane with WFI. In situ implants were placed in conical vials open on one side and closed with dialysis membrane on other side. The formulations were placed in a 50 ml Water for injection at 370C. At different time intervals, 5 ml samples were withdrawn and replaced with fresh medium and the withdrawn samples analyzed for drug content by UV-visible spectrophotometer at 240nm. After every one week the complete medium was withdrawn and replaced by fresh medium to avoid saturation of the medium. The obtained data was fitted in to mathematical equation (zero order, first order, higuchi model) in order to describe the kinetics and mechanism of drug release from the implant formulations.

To assess the physical and chemical stability of the Tariquidarbimesylate formulations, accelerated stability studies were conducted for 3 months. The optimized formulations were placed in vials and stored at 400C/75%RH. After 90 days the formulations was checked for physical appearance and drug content using High Performance Liquid Chromatography (HPLC).

The solubility studies of Tariquidar bimesylate in different solvents revealed that it was freely soluble in DMSO and NMP. In ethanol it was slightly soluble

Formulations were prepared using three different grades of polymer with (PLGA 85:15, PLGA 75:25 and PLGA 50:50) different concentrations of polymers with a solvent NMP. The compositions and ratios of in situ implants were listed in Table 3.

Formulations before injection in to buffer were found to be clear and transparent. Upon injection of polymer solutions in to the water for injection, the polymer solidified as the solvent dissipated in to aqueous medium and formed implants. The various formulations prepared using different polymer concentrations are shown in Table 3. Based on burst release, out of 13 formulations six formulations were selected as optimized for further evaluation as shown in Table 4.

The Morphology and surface appearance of in situ implants were examined by using Optical microscopy. The microscopic studies were carried out on various formulations on initial day, 10th day and after 30 days. The image of F10 formulation on initial day was shown in Fig 3 indicates fewer pores on the surface. The Fig 4 and 5 shown increase in pore size indicating the degradation of the polymer 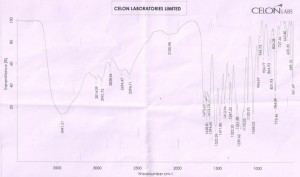 In vitro drug release studies were performed using dialysis membrane with WFI. Comparison of in vitro release studies of various formulations are shown in Fig 9, 10, 11, 12. As the polymer concentration is decreased, more burst release was observed. More prominent burst release was observed in case of F1 and F6 formulations. The release was found to be almost similar in all optimized formulations. Formulations containing benzyl benzoate and PEG showed sustained release nearly up to 6 days (156 hours) when compared to conventional formulation. Hence benzyl benzoate and polyethylene glycol can be used in order to avoid initial burst drug release and to sustain the drug release from implants 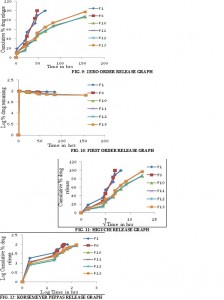 Accelerated stability studies of Tariquidar bimesylate formulation (F10) at temperature 400C/75%RH were studied for 90 days. The formulation was a clear yellow color solution. No color change indicates physical stability for 3 months. The drug content was analyzed and data is presented in Table 7. From the data, it was observed that there was negligible change in the drug content indicating chemical stability

CONCLUSION: Tariquidar bimesylate Insitu-implants for controlled release by polymer precipitation method were prepared using PLGA 85:15 and PLGA 75:25 polymers can be successfully formulated. Optimum use of various polymers along with benzyl benzoate and polyethylene glycol can result in better sustained release and can be explored for therapeutic benefit in Multidrug resistant tumors.