ABSTRACT: Carboplatin is the first-line choice of drug for ovarian cancer. In this investigation, we have prepared carboplatin silver nanoparticles (CSNP’s) by electrostatic adsorption. The size range was found to be 53-87 nm and the zeta potential was in the range of -36 to -61. After coating with hyaluronic acid and drug the size was observed to be around 80 nm and zeta potential was -41. After coating the monodisperse particles with a narrow polydispersity index value of 0.49-0.51 were obtained. The pH of silver nanoparticles without coating was in between 5.1-5.9. Atomic force microscopy confirms the spherical shape of nanoparticles. The entrapment was found to be 70-87%. Formulation F3 was found to have more entrapment efficiency and the release extended up to 6 h in phosphate buffer saline pH 7.4. The uniform concentration of trisodium citrate and tannic acid as a reducing agent along with high concentration of hyaluronic acid in F3 formulation able to entrap high drug load and release for an extended period. The drug release follows zero-order kinetics. This might provide a promising alternative for the development of an anticancer drug delivery system.

INTRODUCTION: Ovarian cancer is the 5th leading cause of death in women, and it accounts for 2.5% malignancies among females. Ovarian cancer (National Cancer Registry Program, Indian Council of Medical Research Bangalore: 2006) statistics have not improved to date, highlights the fact that targeted chemo-therapeutic strategies are required. Cancer nanotherapeutics are rapidly progressing and are being implemented to solve several limitations of conventional drug delivery systems such as poor oral bioavailability, low therapeutic efficacy 1. Conventional chemo-therapeutic dosage forms have actions on both cancer and normal tissues decreasing the bio-availability.

Intravenous chemotherapy that are administered to cancer patients shows poor cellular uptake contributing to high dose and limited therapeutic efficacy. In order to decrease those effects, drug delivery systems using nanoparticles with special materials with various properties are the need of the hour. In recent years, metallic nanoparticles have attracted considerable interest due to their intriguing physicochemical properties, small size, and surface plasmon behavior 2. Among all, silver nanoparticles 3 (Ag NPs) display the highest level of commercialization 4 and account for 55.4% of the total nanomaterial-based consumer products available in the market 5, 6 (313, out of 565 products.

The principal cancer treatment in clinics is still chemotherapy and the major goal involved in it is to ensure the safe and efficient transportation of drug molecules to the targeted sites. Carboplatin is an alkylating agent and widely used in neck, cervical, ovarian, breast and bladder cancer. Hyaluronic acid (HA) is one of the major components of vertebrate tissue and body fluid; it interacts with the CD44 receptors that trigger intracellular signals influencing cellular proliferation, differentiation, and migration. CD44 overexpression is associated with tumor angiogenesis and progression to metastasis and so HA has been used to target cancer cells with various nano vectors in-vitro. In this research investigation, we have formulated and characterized carboplatin silver nanoparticles with pH stimuli polymer.

Synthesis of Silver Nanocore: A 100 ml aqueous solution containing sodium citrate (5 micromolars) and tannic acid (TA) as reducing agent 7 of different concentrations (1, 3, 5, 7 Mm) was prepared and heated for 15 min with vigorous stirring. Aluminum foil was wrapped above the beaker to prevent the evaporation of the solvent. After 15 min 1 ml of (25 Mm) AgNO3 was injected into the above solution containing reducing agents. The solution turned bright yellow immediately. An obtained silver nanoparticle solution was freeze-dried, and the powder was used 8.

Conjugation of Silver Nanoparticle with Carboplatin: Carboplatin was then tethered to the surface of the silver nanoparticle through the heating gradient and vigorous stirring. There was a slight color change indicating the surface functionalization 8.

Atomic Force Microscopy: Hyaluronic acid-coated formulation was coated on the surface of the coverslip and analyzed for the morphology.

Determination of Entrapment Efficiency: Accurately 1.5 ml of the formulation was taken centrifuged at 13,000 rpm for 45 min at 4 °C using Eppendorf centrifuge. The supernatant was recovered using a micropipette and analyzed by the UV method for carboplatin content. The percentage of drug encapsulation was calculated by using the following formula 10.

In-vitro Release Study: One ml of the formulation was taken in the dialysis bag was then placed in the beaker containing 50 ml phosphate buffer pH 7.4 at room temperature and stirred at 100 rpm using a magnetic stirrer. The sample was then analyzed in UV at 210 nm by taking 1 ml of sample and making it up to 10 ml 11.

Statistical Analysis: All experiments were performed in triplicates. Statistical analysis was performed using Prism software (version 5). Statistical significance was calculated using ANOVA and the value of P < 0.05 was considered to be statistically significant.

RESULTS AND DISCUSSION: The reduction of Ag+ ions into AgNPs was observed with the peak absorbance at 430 nm in this study. The peak was taken when there was a change of the colorless solution into yellow color. A similar study by Aishwarya Sooresh et al., (2011) study revealed the reduction of Ag+ ions into AgNPs at the peak absorbance 420 nm. The difference in the absorbance was obtained as a result of different concentrations of the reducing agents used in the formulations. The drug was conjugated to the silver nanoparticle through a vigorous stirring and heating gradient. The size was found to be between 53- 87 nm and zeta potential were between -36.7 to -61.1 as indicated in Table 1. A similar study by Aishwarya Sooresh et al., (2011) has stated that silver nanoparticles prepared by chemical reduction method with the drug deltamethrin were in the size range between 20-200 nm. The nanoformulation coated with the polymer hyaluronic acid confirmed the spherical shape like depicted in Fig 1. 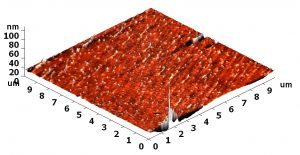 TABLE 1: CHARACTERIZATION OF SILVER NANOPARTICLE FORMULATIONS LOADED WITH THE DRUG 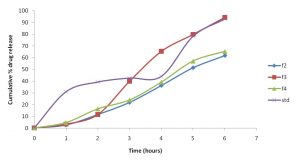 The in-vitro release data were interpreted through one way analysis of variance test, and the result confirms that the difference in release values between formulations was not significant. The p-value obtained was 0.5407.

The in-vitro release of conventional carboplatin injection solution from the market shows a similar release pattern like f3 formulation till 6 h but the drug release in the initial time period was more when compared to all the three formulations up to 3 h. But the drug release between 3 to 4 h was not increased hence the cumulative drug release remains the same as depicted in Fig. 2. All the formulations obey zero-order kinetics, and the drug release from formulation undergoes diffusion mechanism when subjected to korser Meyer peppas model with n value > 1 indicating non fickian super case II. This reveals the stress-induced relaxation; swelling and polymeric erosion takes place in the formulation coated with hyaluronic acid during drug release.

CONCLUSION: This study confirms that the silver nanoparticle with carboplatin formulation coated with hyaluronic acid able to release the drug up to 6 h in a similar fashion like marketed carboplatin injection. But the release in the acidic condition has to be explored. Further, investigation on its stability during storage and its selectivity towards PA- 1 cell lines, CD44 receptors mediated uptake in ovarian cancer cells is required.

ACKNOWLEDGEMENT: I wish to express my deep sense of gratitude and prolonged indebtedness to our principal, PSG College of Pharmacy and PSG Sons and Charities, for providing necessary facilities for doing project work. We would like to thank Dr. Puthusserickal A. Hassan (Scientific Officer (H) & Head, Nanotherapeutics and Biosensors Section, Chemistry Division, Bhabha Atomic Research Centre, Trombay, Mumbai - 400 085) for giving immense support and technical guidance.