INTRODUCTION: Successful oral delivery of drugs has always remained a challenge to the drug delivery field, since approximately 40% of the new drug candidates have poor water solubility, and thus oral delivery is frequently associated with implications of low bioavailability. Many approaches have been meticulously explored to improve the oral bioavailability of such drugs including particle size reduction (micronization or nanosizing), complexation with cyclodextrins, salt formation, solubilization based on cosolvents, surfactants, etc. Of late lipid-based formulations have attracted great deal of attention to improve the oral bioavailability of poorly water soluble drugs

In fact, the most favoured approach is to incorporate lipophilic drugs into inert lipid vehicles such as oils, surfactant dispersions, microemulsions, self- emulsifying formulations, self microemulsifying formulations, and liposomes. This could lead to increased solubilization with concomitant modification of their pharmacokinetic profiles, leading to increase in therapeutic efficacy.1

Among all techniques microemulsion system has considerable potential to act as a drug delivery vehicle by incorporating a wide range of drug molecules Microemulsions have been widely studied to enhance the bioavailability of the poorly soluble drugs.. Interest in these versatile carriers is increasing and their applications have been diversified to various administration routes in addition to the conventional oral route. This can be attributed to their unique solubilization properties and thermodynamic stability which has drawn attention for their use as novel vehicles for drug delivery.

Microemulsion has got advantage like excellent thermodynamic stability, high drug solubilization capacity, improved oral bioavailability and protection against enzymatic hydrolysis. The only problem with microemulsion is poor palatability due to the lipid content leading to the poor patient compliance. Moreover due to their water content, microemulsions cannot be encapsulated in soft gelatin or hard gelatin capsules.

All these problems may be overcome by formulating or converting microemulsion into another stable dosage form like conversion of microemulsion into powder or tablet by adsorbing onto the solid support i.e. adsorbent. Thus solid microemulsion technique is developing to modify the physicochemical and biopharmaceutical properties of drug having low solubility and high permeability.

Darunavir is a promising antiretroviral drug acting as a protease inhibitor used to treat HIV. It acts on the HIV aspartyl protease which the virus needs to cleave the HIV polyprotein into its functional fragments. Darunavir is classified under class II according to biopharmaceutical classification system. The drug shows pH dependent solubility. In aqueous media, darunavir exhibits very poor solubility (0.16-0.19 mg/l).

This poor solubility may cause poor dissolution and unpredicted bioavailability. Thus the objective of presented research work is formulation and characterization of solid microemulsion of poorly soluble drug, darunavir to enhance the solubility and dissolution for oral drug delivery.

The ingredients were mixed using a magnetic stirrer and then kept on orbital shaker (Remi motors & RIS-24BL) for 72 h at temperature 370 ± 20 C. The samples were then centrifuged for 5 min at 37°C. The supernatant was pipetted out, diluted with methanol and analyzed by UV spectrophotometer (Shimadzu, Japan) at 263 nm for determining drug concentration.

The results are shown in Tables 1-3. 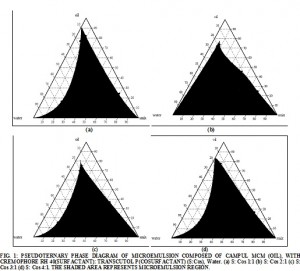 The droplets of the microemulsions being smaller than ¼th the wavelength of visible light, permit white light to pass through the dispersed system making it transparent or translucent. The microemulsion systems were inspected for optical transparency and homogeneity by usual observation against strong light. The system was also checked for the presence of undissolved drug or other solid ingredient. The results are shown in Table 6.

Physical stability of the microemulsions was studied by centrifugation at 3,000 rpm for 2 hours. After centrifugation the samples were observed for clarity and any phase separation or precipitation. The results are shown in Table 6.

The pH measurement of the microemulsions was determined by using a pH meter which was calibrated before use with standard buffer solutions at pH 4 and 7. The results are shown in Table 6.

The refractive index of medicated formulation was determined using an Abbe refractometer. The results are shown in Table 6.

spindle no. S 64, at 100 rpm.  Experiments were carried out in triplicate for each sample and the results are presented as an average ± standard deviation in Table 6.

The microemulsion formulation was analyzed for drug content by U.V. spectrophotometer at 263nm. The results are shown in Table 6

Mean globule size of the optimized microemulsion was determined by photon cross-correlation spectroscopy. Microemulsion was placed in transparent polystyrene cuvette (path length = 1 cm) which was placed in thermostatic sample chamber maintained at 25°C. Sample temperature was set at 25°C and 3 runs of 60s were performed. Detection was carried out at a scattering angle of 90°.  From the resulting correlation curves, a 2nd order analysis was performed to calculate the mean globule size and standard deviation. The results are represented in Fig.2.

To check the drug release pattern through intestine, small portion of small intestine was isolated and used for the study. The tissue was thoroughly washed with pH 7.4 phosphate-buffered saline to remove any mucous and lumen contents. The microemulsion of Darunavir (ME 1 ME 2, ME 3 and ME 4) 5.0 ml (equivalent to 60 mg darunavir) was diluted up to 10 ml with distilled water and mixed for 1 minute. The resultant sample (6.0 mg/ml) of microemulsion of darunavir was injected into the lumen of the small intestine tissue using a syringe, and the two sides of the intestine were tightly closed with the help of a thread. The tissue was placed in a beaker filled with 30 ml of pH 5.5 phosphate-buffer with constant stirring at 37°C. The two ends of tissues were fixed horizontally on to a beaker with the help of a thread. Aliquots of 5 ml were withdrawn at 1 hour time interval till 7 hours and suitably diluted further. The absorbance was measured using a UV-Visible spectrophotometer at a wavelength of 263 nm. The amount of drug permeated (%) was calculated against time and plotted on a graph.

The fixed funnel and free standing cone method was employed. A funnel that is secured with its tip at a given height, h, which was kept 2 cm above graph paper that is placed on a flat horizontal surface. With r being the radius of base of conical pile, angle of repose can be determined by following equation:

Where, Ѳ is the angle of repose,

h is height of pile,

r is radius of base of the pile.

The solid microemulsion was introduced into the 10 ml graduated cylinder. The volume occupied by the SME was recorded. Bulk density was calculated using following formula:

It is calculated in g/ml. The results are shown in Table 7.

Solid microemulsion (2 gm) was poured through a glass funnel into 10 ml of graduated cylinder. The cylinder was tapped gently from the height of 2 inches until a constant weight was obtained. The volume occupied by the solid microemulsion after tabbing was recorded and tapped density was calculated using following formula:

Carr’s index can be determined by the following equation,

Hausner’s ratio can be determined by the following equation,

To check the drug release pattern through intestine, small portion of small intestine was isolated and used for the study. The tissue was thoroughly washed with pH 7.4 phosphate-buffered saline to remove any mucous and lumen contents. The solid microemulsion of Darunavir, 3.28g, (equivalent to 60 mg darunavir) and pure drug darunavir (60 mg) were diluted up to 10 ml with distilled water and mixed for 1 minute. The resultant samples (6.0 mg/ml) of solid microemulsion of darunavir and pure drug darunavir (60 mg) were injected into the lumen of the small intestine tissue using a syringe, and the two sides of the intestine were tightly closed with the help of a thread. The tissue was placed in a beaker filled with 30 ml of pH 5.5 phosphate-buffer with constant stirring at 37°C. The two ends of tissues were fixed horizontally on to a beaker with the help of a thread. Aliquots of 5 ml were withdrawn at 1 hour time interval till 7 hours and suitably diluted further. The absorbance was measured using a UV-Visible spectrophotometer at a wavelength of 263 nm. The amount of drug permeated (%) was calculated against time and plotted on a graph. The results are shown in Fig.3.

To assess the stability of drug and formulation, stability studies were done as per ICH guidelines. The formulated solid microemulsion were wrapped in aluminium foil and stored at 45 ± 0.5ºC for period of one month. After an interval of 15 days the solid microemulsion were tested for physical appearance, angle of repose, bulk density, tapped density, Carr’s index, Hausner’s ratio, drug content. The results are shown in Table 8.

Solubility Study: The solubility of darunavir in various vehicles is shown in Table 1 to 3. The components and their concentration ranges can be obtained by the construction of a pseudo-ternary phase diagram. The drug loading capability is the main factor when screening the oil phase. Darunavir has the highest solubility in Capmul MCM as shown in Table 1 and was, therefore selected as an oil phase in the present study. On the basis of the solubility profile as shown in Table 2 and 3, Cremophore RH 40 was considered as a surfactant and Transcutol P as a co- surfactant.

All the microemulsions were transparent and appeared like a homogenous single-phase liquid, when observed for visual clarity against strong light. No traces of undissolved drug or other solid ingredient were found in all the formulations. This indicated that the drug was completely soluble in the system.

None of the microemulsion systems showed signs of phase separation on centrifugation at 3000 rpm for 2 hours. This result provided a rapid and full proof identification of the system as microemulsion.

To understand the characteristics of drug permeation, ex vivo intestinal tissue permeation study was carried out across the small intestine of male Sprague-Dawley rats6.The ex-vivo intestinal drug permeation from the microemulsions (ME 1 to ME 4) is shown in Fig. 3. The results revealed that formulation ME 1 permeated higher percentage of the drug as compared to ME2, ME3 and ME4. The higher permeation may be due to the higher amount of the oil phase incorporated in ME 1 which is reponsible for enhanced solubility of the drug and permeation. 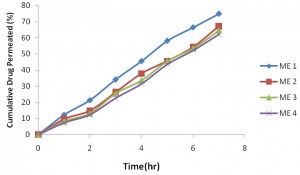 The solid microemulsion of darunavir was prepared in a view to convert the liquid microemulsion in solid dosage form with improved palatability. Adsorption with aerosil 200 (SME 2) was optimized as liquid to solid conversion was effective at very concentration amongst all other adsorbents.

The mechanism reported to improve the oral absorption of lipophilic drugs when incorporated into solid microemulsion includes,  increasing membrane fluidity, opening of tight cellular junctions, inhibiting P-gp and/or CYP450 by surfactants and stimulating lipoprotein/chylomicron production by lipid. The better permeation observed with the developed solid microemulsion formulation might be due to the oil and surfactant content that could have made the intestinal wall more permeable by partial disruption of membrane. The surfactant-induced membrane fluidity and inhibition of P-gp might play an important role in the permeability change and the increase of drug absorption in the gastrointestinal tract.9 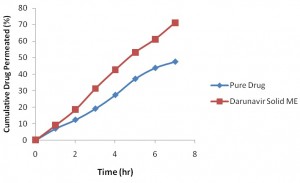 The result of stability studies shown that there were no significant changes in the angle of repose, bulk density, tapped density, Hausner’s ratio, Carr’s index, drug content of solid microemulsion after storing at a  temperature of 40ºC ± 2ºC / 75% ± 5%  relative humidity for one months. These results indicated that drug remain stable after incorporating in the solid microemulsion containing aerosol 200 as an adsorbent.