In the present investigation an attempt was made to prevent ulcerative colitis and to improve the patient compliance by developing enteric coated (EC) tablets of prednisolone and to reduce the side effects of anti inflammatory drugs in G.I.T. by developing conventional tablets of prednisolone by wet granulation technique and the prepared prednisolone based tablets were coated with different ratios of pectin and ethyl cellulose as enteric coating material by spraying organic system. The enteric coated tablets of prednisolone were subjected to an in vitro drug release study in the presence and absence of pectinolytic enzyme using simulated colonic fluid of pH 6.0 as the dissolution medium. The results showed that the degradation was very efficient with pectinolytic enzyme relative to other processes. Colon drug delivery is advantageous in the treatment of colonic disease, where oral deliveries of drugs are unstable or susceptible to enzymatic degradation in upper GI tract. In this study, coated tablets which were resistant to gastric and small intestinal pH conditions but dissolving in colonic pH conditions were fabricated. The results also demonstrated that pectin and ethyl cellulose can be successfully used for organic system to coat tablets for colon targeted delivery of drug. Among the four formulations, D batch results matched with our theoretical profile.

INTRODUCTION: In recent years, colon targeted delivery systems have been the focus point of formulation laboratories because colon is considered as a suitable site for delivery of both conventional and labile molecules and it is also a site for some specific diseases, such as, ulcerative colitis, Crohn's disease, bowel cancer, infections and constipation, which requires local delivery of the drug(s). Various approaches have been used for oral delivery of drug(s) to the colon which includes time-dependent delivery, pH-dependent systems and bacteria-dependent delivery 1-3. Attempts have also been made to develop delivery systems that utilizes multiple principles such as pH-dependent system and enzymes produced by bacteria residing at the colon.

But so far, the pH-dependent systems have found practical application. Oral ingestion has been the most convenient and commonly employed route of drug delivery 4. Indeed, for sustained-release systems, the oral route of administration has received the most attention with respect to research on physiological and drug constraints as well as design and testing of products. This is because there is more flexibility in dosage form design for the oral route than that is for the parenteral route 5, 6.

An oral enteric coated dosage form is a one in which a tablet is coated with a material to prevent or minimize dissolution in the stomach but allow dissolution in the small intestine. This type of formulation either protects the stomach from a potentially irritating drug (e.g., aspirin) or protects the drug (e.g., erythromycin) from partial degradation in the acidic environment of the stomach. In the various formulations, lactose was used as an excipient and was coated with enteric coating polymer pectin and ethyl cellulose and the formulation remains undissolved in stomach, small intestine but dissolves in colon. Prednisolone is an anti-inflammatory drug, for oral administration in the treatment of diseases of colon like ulcerative colitis, Crohn’s disease, Bowel cancer, infections and constipation, whereby high local concentration can be achieved while minimizing side effects that occur because of the release of drugs in the upper GIT or unnecessary systemic absorption 7-11. The absolute oral bioavailability is 75-98%. It has a half life of 2-4 hrs 12, 13.

Preparation of core tablets: Granules were prepared using wet granulation method as per formulae given in (Table 1).  Prednisolone was passed through # 40 and binded with 10% starch mucilage and dried at 45oC for about 25 min and these granules were passed through # 20 and lubricated with magnesium stearate. Mixed blend was compressed into tablets on 16 station single rotary tablet compression machine to a weight of 209 mg each with thickness of 4.46±0.21 mm and diameter of 7.9 mm using shallow concave plain/plain punch.

Preparation of enteric coating solution: Weighed amount of pectin was dissolved in 50 ml of water and ethyl cellulose was dissolved in 50 ml of isopropyl alcohol. The two solutions were then mixed well to form a homogeneous solution and PEG-6000 was added as a plasticizer. The amount of pectin and ethyl cellulose in each coating was given in (Table 2).

Coating of core tablets: About 1000 tablets were taken and were coated in a pan coater at 50 rpm at a temperature of 50oC and at a flow rate of 10 ml/min. Coating was carried out with spraying method and dried.

Evaluation of Prednisolone core and coated tablets: The core and coated tablets were evaluated for hardness, friability, weight variation, disintegration time, thickness, drug content and in vitro release studies. The disintegration time was determined using USP tablet disintegration test apparatus (ED2L, Electrolab, India) using distilled water without disc at room temperature. In weight variation, twenty tablets were selected at random and average weight was determined using an electronic balance (Shimadzu AX200, Japan). Tablets were weighed individually and compared with average weight. The hardness of the tablets was measured by using Monsanto hardness tester. The thickness of the tablet was measured by using vernier calipers. Friability test was performed using friabilator (Roche friabilator). Twenty tablets were accurately weighed and placed in the friabilator and operated for 100 revolutions. The tablets were dedusted and reweighed. The tablets that loose less than 1% weight were considered to be compliant.

Estimation of Prednisolone: Ten tablets were weighed individually and powdered; an amount equivalent to 5 mg of prednisolone was taken and 50 ml of 95% ethanol was added and was shaken for 30 minutes. Sufficient ethanol (95%) was added to produce 100 ml. It was centrifuged and suitable volume of the supernatant liquid equivalent to 0.5 mg of prednisolone was pipetted out and diluted to 50ml with 95% ethanol. The solution was filtered (through 0.45 µm). Drug content was measured at 246 nm using Perkin Elmer UV/Visible double beam spectrophotometer.

In gastric and intestinal pH: In vitro drug release study of prednisolone enteric coated tablets was carried out by using USP XXIV six station dissolution rate test apparatus (Electrolab, TDT- 067) with paddle stirrer. The dissolution rate was studied in 900 ml of 0.1 N HCl (pH 1.2) maintained at a temperature of 37±1oC with a speed of 50 rpm for first two hours followed by phosphate buffer (pH 7.4) for further four hours. Samples of 5 ml were withdrawn after every hour, filtered (through 0.45 µm) and replaced with 5ml of fresh dissolution medium. The samples were suitably diluted if necessary and estimated spectrophotometrically at 246 nm by using Perkin Elmer UV/Visible double beam spectrophotometer and cumulative percentage drug release was calculated.

In simulated condition of colon: In vitro drug release study of prednisolone enteric coated tablets was carried out by using USP XXIV six station dissolution rate test apparatus (Electrolab, TDT- 067) with paddle stirrer. The dissolution rate was studied in 900 ml of simulated colonic fluid (pH 6) in the presence and absence of pectinolytic enzyme (2 ml/lit) maintained at a temperature of 37±1oC for 12 hours with a speed of 50 rpm. Samples of 5 ml were withdrawn after every hour, filtered (through 0.45 µm) and replaced with 5 ml of fresh dissolution medium. The samples were suitably diluted if necessary and estimated spectrophotometrically at 246 nm by using Perkin Elmer UV/ Visible double beam spectrophotometer and cumulative percentage drug release was calculated.

RESULTS AND DISCUSSION: All the batches of prednisolone tablets were prepared under similar conditions to avoid processing variables. They were evaluated for various physicochemical parameters such as weight variation, thickness, hardness, friability, disintegration and drug content as shown in (Table 3). All the parameters were found to be satisfactory within the limits.

In this study, the core tablets containing the drug alone were coated with different ratios of pectin and ethyl cellulose in isopropyl alcohol and water using PEG 6000 as a plasticizer. The formulations were characterized by in vitro dissolution studies in simulating gastric fluid of pH 1.2 and intestinal pH 7.4. The formulation D showed the least cumulative % drug release in gastric and intestinal pH conditions compared to other formulation during 6 hrs study as shown in (Table 4 and Fig. 1). 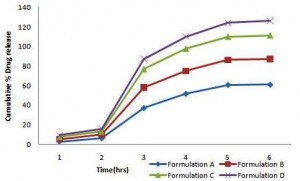 FIG. 2: IN VITRO DRUG RELEASE STUDY OF PREDNISOLONE ENTERIC COATED TABLETS IN COLONIC FLUID IN THE PRESENCE AND ABSENCE OF PECTINOLYTIC ENZYME

It was concluded that the prednisolone enteric coated tablets can be formulated with good release profile as a colon targeting drug delivery system. It prevents the drug release in the stomach and intestine, so we can solve the problem of any side effects of anti-inflammatory drugs and can prevent ulcerative colitis.