Felodipine, a calcium channel blocker, is used for hypertension and angina pectoris. Felodipine fast- disintegrating tablets (FDT) have been prepared by direct compression method. Effect of superdisintegrants (like crosspovidone, croscarmellose sodium and sodium starch glycolate) on wetting time, disintegrating time, drug content, in vitro release and stability parameter has been studied. Disintegrating time and dissolution parameter (t50% and t90%) decreased with increases in the level of croscarmellose sodium and crosspovidone whereas disintegration time and dissolution parameter increased with increase in the level of more than 5% sodium starch glycolate. The formulation did not show any change in disintegration time, wetting time and drug content after stability period. It was concluded that fast disintegrating Felodipine tablets can be prepared by direct compression using superdisintegrants. 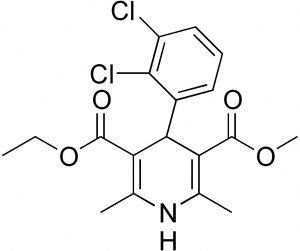 Felodipine is almost completely absorbed from the gastrointestinal tract after oral doses but undergoes extensive first pass metabolism, with a bioavailability of about 15%. It is extensively metabolized in the gut and the liver and is excreted almost entirely as metabolites, about 70% of a dose being excreted in urine and the remainder in feces. The terminal elimination half life is reported to be 11 to 16 hours after oral administration. Felodipine is about 99% bound to plasma proteins 1-4.

The fast disintegrating drug delivery systems is rapidly gaining acceptance as an important novel drug delivery system. This delivery system offers better patient compliance than conventional tablet dosage form 5. Bioavailability of drug from this delivery system is significantly greater than conventional tablets 6. Fast disintegrating tablets are not only indicated for people having difficulty in swallowing but also ideal for unfavorable conditions of administration where water is not available. Syrups are best for pediatrics but they are bulky and drugs are not as stable in liquid form as in solid form 7. After keeping the FDT on tongue, immediately it disintegrates, releasing the drug which dissolves or disperses in the saliva. Some drugs are absorbed from the mouth, pharynx and esophagus, as the saliva passes down into the stomach, in such cases bioavailability of drug is significantly greater than conventional dosage form 8. Main advantages of direct compression are low manufacturing cost and high mechanical integrity of the tablets 9-10. Therefore, direct compression appears to be a better option for manufacturing of tablets. The fast disintegrating tablets prepared by direct compression method in general, are based on the action established by superdisintegrants like croscarmellose sodium (CCS), crosspovidone (CP) and sodium starch glycolate (SSG). The effect of functionality difference of the superdisintegrants on tablet disintegration has been studied 11. The objective of the present investigation was to develop fast disintegrating Felodipine tablets by direct compression method and to study the effect on functionality differences of superdisintegrants on the tablet properties.

Preparation of Tablets by Direct Compression Method: Tablets containing 5 mg of Felodipine were prepared by direct compression method and the formula used is shown in table-1. The drug, diluent and superdisintegrants were mixed together in a plastic container. Talc and Magnesium stearate were passed through sieve no. 60, mixed and blended with initial mixture in the plastic container followed by compression of the blend.

TABLE 1: FORMULA USED IN THE PREPARATION OF TABLETS

Evaluation of Felodipine disintegrating tablets: All prepared tablets were evaluated for hardness, thickness, friability, disintegration time, wetting time, drug content and stability studies. Pfizer hardness tester was used for the determination of the hardness of the tablets. The tablet was placed in contact between the plungers and the handle was pressed, the force of the fracture was recorded .The thickness of tablets were recorded during the process of compression using Calipers (Mitotoyo; Japan).

The friability of the tablets was determined using a Roche Friabilator (Electrolab, EF-2 Friabilator) by taking two tablets from each batch and  accurately weighed  and placed in the Friabilator then operated for 100 revolutions .Then the tablets were dedusted and reweighed .Percentage friability was calculated using the formula, F = (1-wo/w )*100.  In the disintegration time study, the tablets were taken and introduced in each tube of disintegration apparatus, and the tablet rack of the disintegration apparatus was positioned into a 1 liter beaker containing 900ml of phosphate buffer pH 6.5 containing 0.1% SLS  and time of disintegration was recorded at 37±2oC. In the wetting time study, a piece of tissue paper folded twice was placed in a petridish (with internal diameter 6.5cm) containing 5ml of distilled water. A tablet was placed on the paper and the time for complete wetting of the tablet was measured in seconds. For drug content analysis a total 10 tablets were weighed and powdered. The powder equivalent to 5mg of Felodipine was taken and dissolved in phosphate buffer pH 6.5 containing 0.1% SLS .After that an aliquot of the filtrate was diluted and analyzed spectrophotometrically (UV-1700 Shimadzu Corporation, Japan) at 362 nm. The stability study of the tablets was carried out according to ICH guidelines .The formulations were stored at 40 ±2oC/75±5%RH for 4 weeks in a stability chamber (Labcare, Mumbai, India).

RESULTS AND DISCUSSIONS: The values of precompressional parameters evaluated were within prescribed limits and indicated a good free flowing property. Results are shown in Table 2. The post compression parameters such as hardness, friability, thickness, disintegration time, wetting time, t50%, t90%    and drug content are shown in Table 3 and Table 4.

The influence of superdisintegrants on the dissolution of Felodipine from the tablets is shown in Fig. 1. The t50% and t90% values decreased (p<0.05) with increase in the level of superdisintegrants in formulations from F1-F8. An increase value of t50% and t90% can be seen in formulation F9. It may be due to higher concentration of sodium starch glycolate. At higher concentration sodium starch glycolate provides viscous gel layer, which leads to formulation of a thick barrier to the further penetration of the dissolution medium and hindered the dissolution of tablet content 15. 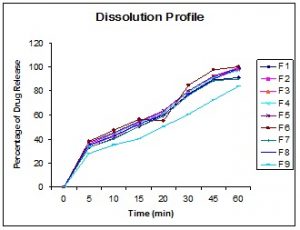 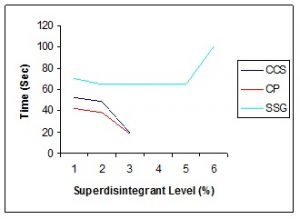 FIG. 2: EFFECT OF CONCENTRATION OF CCS, CP AND SSG ON DISINTEGRATION TIME OF TABLETS 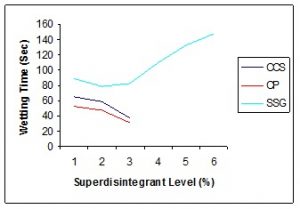 FIG. 3: EFFECT OF CONCENTRATION OF CCS, CP AND SSG ON WETTING TIME OF TABLETS