ABSTRACT: The aim of the present work was to formulate and evaluate oral thin films for sublingual administration of Amlodipine besylate. Amlodipine besylate is a calcium channel blocker used in the treatment of hypertension, angina and other cardiovascular diseases. Films were formulated using HPMC (15cps, 60cps), PVA, and HPC as different film-forming agents (3 and 4% (w/v)). Poly ethylene glycol 400 was used as plasticizer and SSG as disintegrant. Sodium saccharine was used to mask the bitter taste of the drug. Films were prepared by solvent casting method and evaluated for drug content, disintegration time, thickness, tensile strength, folding endurance and % cumulative drug released. The optimized formulation (HPMC 15 cps) F5 exhibited acceptable folding endurance (95), disintegration time (33 sec) and drug release of 98.5% in 360 sec. It can be concluded from the study that the Amlodipine oral thin films for sub lingual administration can be a potential novel drug dosage form

INTRODUCTION: Oral thin films (OTF) are the most advanced form of oral solid dosage form due to more flexibility and comfort. It improves the efficacy of APIs by dissolving within a minute in the oral cavity after the contact with saliva 1. The delivery system consists of a very thin oral strip. When these strips are placed sublingually the film rapidly hydrates and adheres on the site of application. It rapidly hydrates and adheres to the site of application. It then rapidly disintegrates and dissolves to release the medicament for oromucosal absorption.

Bioavailability of the drug will be enhanced due to high blood flow, since the permeability of oral mucosa is 4-1000 times greater than that of skin 2. The advantage of oral thin films over other oral dosage forms is it provides improved oral bioavailability by bypassing the first pass effect3.

Hypertension is a medical condition in which the blood pressure is chronically elevated which is commonly referred as "high blood pressure" 4. Amlodipine besylate belongs to the dihydropyridine (DHP) class of calcium channel blocker which has oral bioavailability of 64 – 90% and half-life of about 30 - 50 hours. It undergoes extensive first pass metabolism. Hypertension is a condition, which requires immediate action. To achieve this, drug was formulated into oral thin films for sublingual administration so that the onset of action is rapid.  Oral thin films were prepared using film forming polymers like HPMC, HPC and PVA, PEG 400 as plasticizer, Sodium starch glycolate (SSG) as Super disintegrant, Vanillin as flavoring agent and sodium saccharine as sweetening agent.

Amlodipine besylate belongs to the dihydropyridine (DHP) class of calcium channel blockers used for hypertension and angina. It has oral bioavailability of 64 – 90%. It undergoes extensive first pass metabolism and has a half-life of about 30 - 50 hours 5. Hypertension is a condition, which requires immediate action. To achieve this drug was formulated into oral thin films for sublingual administration so that the onset of action is rapid. In the above dosage form HPMC, HPC and PVA are used as film forming polymers. Poly ethylene glycol 400 was used as plasticizer, sodium starch glycolate (SSG) as disintegrant, vanillin as flavoring agent and sodium saccharin as sweetening agent.

Films were prepared by solvent casting method 6, 7. The specified amount of polymer was weighed and dissolved in a specified amount of water for overnight to get a uniform dispersion of 3% and 4% (w/v) solutions. Drug, sodium starch glycolate, vanillin, citric acid was dissolved in water. The drug solution was added to the polymer solution and mixed using magnetic stirrer for 1 hour.

The resulting solution was degassed to remove the bubbles formed. The bubble free solution was cast on to a dish mounted with aluminum foil in surface area of 28.6 cm2. It was dried for 24 hours at room temperature. The film was removed from the dish and observed for any imperfections. Further studies were conducted for the selected formulations. Films of area 2.25 cm2 (1.25 X 1.25) were cut and stored in a desiccator. The composition of the Amlodipine Besylate oral thin films are listed in Table 1.

CHARACTERIZATION OF THE FILMS:

Weight variation of the film 8: 2.25 cm2 films were cut at five different places in the cast film. The weight of each film strip was taken and the weight variation was calculated.

Tensile strength 10: Tensile testing was conducted using a texture analyzer AG/MC1 (Acquati, Italy), equipped with a 5 N load cell. The film was cut into 30×20mm strips. Tensile tests were performed according to ASTM International Test Method for Thin Plastic Sheeting (D 882-02). Each test strip was placed in a tensile grip on the texture analyzer. Initial grip separation was 20mm and crosshead speed was 1 inch/min. The test was considered concluded when the film breaks. Tensile strength, was computed with the help of load require to break the film and cross sectional area to evaluate tensile properties of the films.

Content uniformity 14: The films were tested for content uniformity. Films of 2.25 cm2 were cut and placed in a 100 ml volumetric flask and dissolved in methanol and the volume was made up to 100 ml. Solution was suitably diluted. The absorbance of the solution was measured at 237nm.

In-vitro Dissolution studies 15: Dissolution study was carried out using USP type I (basket apparatus) with 300 ml of 7.4 pH Phosphate buffer as the dissolution medium, maintained at 37 ± 0.50C. Medium was stirred at 50 rpm for a period of 30 minutes. Samples were withdrawn at every 1 min interval up to 30 min, replacing the same amount with the fresh medium. Samples were suitably diluted with 7.4 pH phosphate buffer and analyzed for drug content at 237nm.

Drug polymer compatibility studies: FT-IR spectroscopy was employed to ascertain the compatibility of Amlodipine besylate with polymer. The individual drug and polymer were separately scanned. Both the spectra were compared for confirmation of common peaks. Amlodipine besylate with polymer showed no significant variation in intensity and position of peaks, suggesting that drug and excipients were compatible. The characteristic peaks and observed peaks are mentioned in Table 2. The spectra of Drug and the excipients are given in Fig. 1-3. 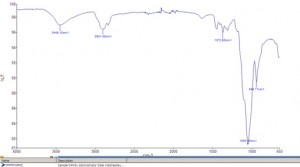 Drug content: The drug content of all the films was in the range of 94.4 to 99.4 indicating that drug was uniformly dispersed throughout the films. 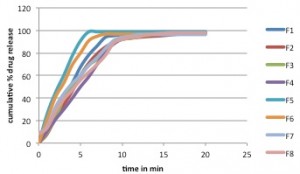 Stability studies of the optimized batch F5 were carried out at 40°C/75%RH, 25°C/60%RH and 25°C/40%RH. Films stored at 40°C/75%RH were highly unstable within 1 month storage. Films stored at 25°C/60%RH were unstable after 2 months period by developing color change (slightly yellow) and becoming sticky in appearance. Films stored at 25°C/40%RH were found to be stable for 3 months. The batch was found acceptable visually and mechanically, with slight change in in-vitro disintegration time. The above observations indicate that temperature and humidity plays a critical role in the stability of the rapidly dissolving films containing HPMC E15 as the film-forming polymer. Therefore, selection of appropriate packaging plays a crucial role in the stability of oral thin films. Stability studies results are shown in Table 4.

Polyethylene glycol 400 (30% w/w of polymer) was used as plasticizer and to enhance the tensile strength of film. 2% sodium starch glycolate is used as disintegrant to dissolve the films rapidly when comes in contact with saliva. 1% w/w Sodium saccharine was used as a sweetener and 1% w/w of vanillin was used as flavoring agent.

The films were evaluated for various properties such as weight variation, thickness, tensile strength, folding endurance, disintegration time, drug content. The result showed that all the films have a smooth surface and good folding endurance. Films weight ranged from 41.4 to 56.16mg. The thickness of the formulations ranged from 0.1 to 0.29mm. Formulations containing 4% polymer concentrations showed greater tensile strength than their corresponding 3% polymer concentrations. Maximum tensile strength of 4.32 MPa was showed for F2 formulation. The disintegration time was found to be 57sec for the formulation prepared by 4% Hydroxy Propyl Cellulose. Drug content in the prepared films was uniform and is in the range of 94.4 to 99.4%. Formulation F5 showed the highest amount of drug release, 98.5% at the end of 16mins.

CONCLUSION: Present study reveals that all the eight formulated films showed satisfactory film parameters. It can be concluded that, Oral thin film containing Amlodipine besylate can be prepared by solvent casting method. 3% w/v of HPMC 15cps (F5) film exhibited required tensile strength, folding endurance and disintegration time. The drug release was about 98.5% in 360 seconds. Accelerated stability studies of the optimized F5 formulation indicate that the formulated oral thin films were unaffected after 3 months of storage under accelerated conditions as there were no signs of visually distinguishable changes in appearance, disintegration time and cumulative percentage of drug release.

From the present investigation, it can be concluded that oral thin film formulation can be a potential novel drug dosage form for pediatric, geriatric and also for the general population.

ACKNOWLEDGEMENT: The authors are thankful to Dr Reddy’s Laboratories Pvt. Ltd, Mumbai for providing Amlodipine Besylate as a gift sample.