ABSTRACT: The present study deals with formulation of a combined analgesic and antacid effervescent tablets. Paracetamol is the model drug used. It is poorly soluble in the water and hence the formulation is in the form of an effervescent tablet so that the disintegration time of the drug is not hindering the action. The mixture of magnesium and aluminium hydroxide is used as the model antacid. The present research work describes a combination dosage of the antacid and analgesic which is useful in case of hyperacidity related severe headaches. In the formulation citric acid and tartaric acid along with sodium bicarbonate is being used as the effervescent mixture. It not only aids in solving the disintegration problem but also increases the palatability due to its acidulous taste. It severs advantages of the tablet dosage form and has the bioavailability of that of the liquid formulation. The combination can also be dispensed in the form of granules in unit sachets. The release character was studied using the disintegration and the dissolution studies conducted. The amount of the active available from the dosage after the release was studied using the UV spectrophotometer and also the values of individual assays conducted. The formulation was seen to have good release and availability of both the active moieties.

INTRODUCTION: The oral dosage forms are the most popular way of taking medication despite having some disadvantages like slow absorption and thus onset of action is prolonged. This can be overcome by administrating the drug in liquid from but, many APIs have limited level of stability in liquid form.

So, effervescent tablets acts as an alternative dosage form. The tablet is added into a glass of water just before administration and the drug solution or dispersion is to be drunk immediately

The tablet is quickly broken apart by internal liberation of CO2 in water due to interaction between tartaric acid and citric acid with alkali metal carbonates or bicarbonates in presence of water. Due to liberation in CO2 gas, the dissolution of API in water as well as taste masking effect is enhanced. The advantages of effervescent tablets compared with other oral dosage forms includes an opportunity for formulator to improve taste, a more gentle action on patient’s stomach and marketing aspects. These tablets can be produce by wet or heat fusion.

The manufacturing shall be done under controlled climatic condition to avoid effervescent reaction. The packaging is done under 25% RH at 25ºC. Different carbonates, acids and buffers were used to attain good effervescence in short time and to obtain a clear solution and to give maximum therapeutic effect in short span of time when taken orally 1, 2.

(a)    They offer an attractive administration and also improve the absorption of the active drug by previous dissolution in a buffered medium,

(b)   Effervescent system can buffer the aqueous solution of drug, so that the stomach pH increases (becomes less acidic) and thus prevent the degradation or inactivation of the active ingredient. This buffering effect (via carbonation) induces the stomach to empty quickly–usually within 20 minutes into small intestine and results in maximum absorption of active ingredient,

(c)    Effervescent tablets have major advantage that the drug product is already in solution at the time it is consumed. Thus, the absorption is faster and more complete than with conventional tablet,

(d)   They dissolve fully in a buffered solution. Reduced localized contact in upper GIT leads to less irritation and greater tolerability. Buffering also prevents gastric acids from interacting with drugs themselves, which can be a major cause of stomach and oesophageal upsets,

(e)    They retain their palatability after lengthy storage, essentially flavourings so they taste much better than a noneffervescent in water. Moreover, they produce fizzy tablets, which may have better consumer appeal than the traditional dosage forms,

(g)   Drugs delivered using effervescent technology have predictable and reproducible pharmacokinetic profiles that are more consistent than tablets or capsules,

(j)     In remote areas, especially where parenteral forms are not available due to prohibitive cost, lack of qualified medical staff, effervescent tablets could become an alternative e.g., the use of chloroquine phosphate effervescent tablets for epidemic diseases like malaria and viral fever,

(k)   To solve the problems of physicochemical stability and high cost of transporting syrups, effervescent tablets provide a realistic solution.

Objective: The urgent need for this today is to give instant relief from hyperacidity which is usually accompanied by terrible head-ache. Headache due to acidity is caused mainly because of absorbing toxic products from the colon. At the time of constipation the un-eliminated and undigested food gets putrefied and it releases toxic materials, acids, etc. This toxins and gases get released into the blood and causes irritation in nerves and nerve cells mainly of head. This irritation of nerve cells in turn leads to headache.

In such cases, the physician’s usually prescribes an antacid separately along with an analgesic. This can be avoided by just taking a single effervescent tablet containing both the actives. It also proves to be beneficial for geriatrics that has swallowing problem. As compared to the syrups for similar actions effervescent tablets would be more stable and less bulky. Also there would be less/ no chance of microbial growth along with dose accuracy 4.

In the study, Paracetamol is used in combination with Aluminium Hydroxide and Magnesium Hydroxide. Paracetamol will act as a quick acting analgesic. Aluminium hydroxide and magnesium hydroxide will act as efficient antacids. Granules ready for compression of individual constituents are prepared and compressed together to get an intact tablet which on addition to required quantity of water would disperse instantly.

Then the concentration curve of the same was obtained within a range of 2ppm to 12ppm. Accurately 10mg of paracetamol was dissolved with 2ml ethanol and then made up to 10ml with distilled water. Then 1ml was pipette out and diluted to 10ml to prepare a stoke solution of 100ppm. From the stoke solution further solutions of 2, 4, 6, 8, 10, 12 ppm was prepared and the absorbance was measured at 243.4 nm.

Method: The tablets were prepared by simple wet granulation technique 8.

All the ingredients were weighed and passed via sieve no. 20 to get free flowing powder (Table 1). The powders were geometrically mixed and then dough prepared with 10% PVA in IPA solution and passed through sieve.no.8 and dried for not more than 5mins. Then the granules were passed via sieve.no.14 and retained on sieve.no.20. The granules along with the post granulating substances are ready for compression. The tablets were compressed with 12 mm diameter flat face punch. The tablets were packed in stacked arrangement.

All the weights are mentioned in mg.

Based on preliminary trails a 22 full factorial design was adopted to optimize the variables. In this design two factors were evaluated, each at two different levels, and experimental trials were performed at four possible formulations. The amount of povidone (X1) and the amount of effervescent mixture (X2) i.e. citric acid ,tartaric acid and sodium bicarbonate; were selected as independent variables and in vitro disintegration/ dispersion time as the response/ dependent variable. (Figure 10, 11)

The tap density is calculated by;

Where θ = angle of repose, h= height of pile, r= radius of the base of pile

TABLE 2: RELATION BETWEEN ANGLE OF REPOSE AND THE FLOW PROPERTY

A funnel was filled to the brim and the test sample was allowed to flow smoothly through the orifice under gravity. From the cone formed on the graph sheet the height and the radius of the pile was determined for the calculation of the angle of repose by the above mentioned formula.

TABLE 3: GRADING OF GRANULES FOR THEIR FLOW PROPERTIES ACCORDING TO CARR’S INDEX

The % Carr’s index is calculated using the following formula;

Disintegration Time: It was performed in disintegration apparatus at 37.50C temperature and time was noted. Place one tablet into each tube and suspend the assembly in to the 1000 mL beaker containing water maintained at 37±2°C. The disintegration time is noted and is compared with IP specification 12 (Figure 8).

Also, the different drug release profiles were compared to get the release mechanism of the formulation (Figure 9). 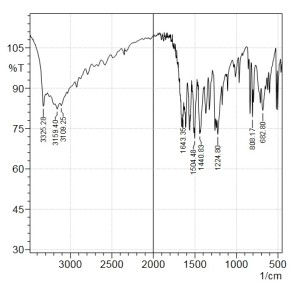 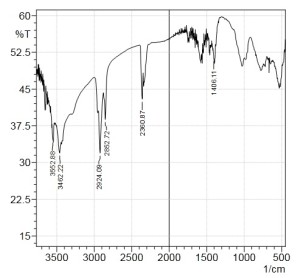 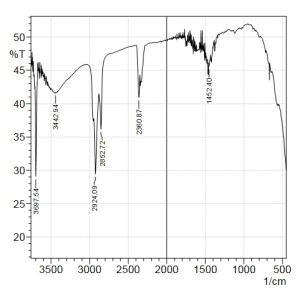 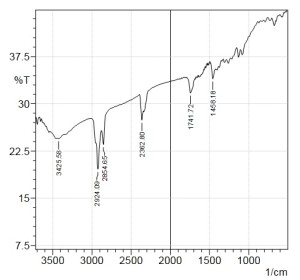 UV spectrum: The drug content and release of paracetamol from the formulation was determined by using UV Spectrophotometer (Figure 5, 6, Table 4).

FIG. 5: SPECTRUM OF PARACETAMOL AND ITS λmax 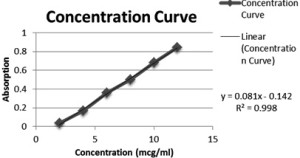 TABLE 5: EVALUATION OF GRANULES READY FOR COMPRESSION INTO EFFERVESCENT TABLETS

TABLE 7: % CUMULATIVE DRUG RELEASE OF ALL THE BATCHES 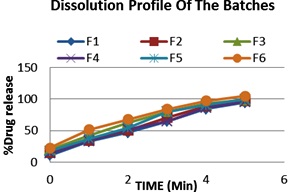 FIG. 7: DISSOLUTION PROFILE OF THE BATCHES 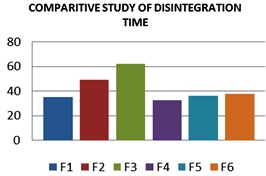 FIG. 8: STUDY OF THE DISINTEGRATION TIME 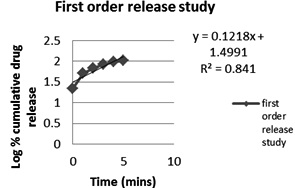 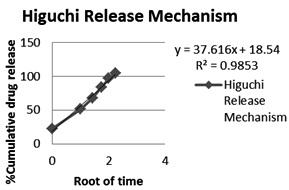 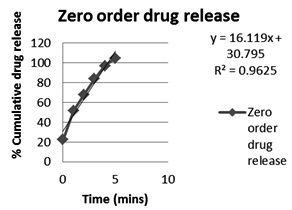 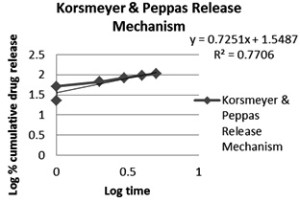 The equation derived for in vitro dispersion time of the factorial formulations is: 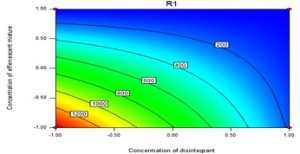 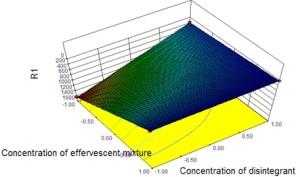 CONCLUSION: The study was undertaken with an aim to formulate a combine effervescent tablet of Paracetamol, Aluminium hydroxide and Magnesium hydroxide.

The results of a 22 full factorial design revealed that the amounts of crosspovidone and effervescent material significantly affect the dependent variable, in vitro dispersion time. It is thus concluded that by adopting a systematic formulation approach, optimized release mechanism can be reached in the shortest time with minimum efforts.