FORMULATION AND EVALUATION OF BIOADHESIVE BUCCAL TABLETS OF ENALAPRIL MALEATE

FORMULATION AND EVALUATION OF BIOADHESIVE BUCCAL TABLETS OF ENALAPRIL MALEATE

INTRODUCTION: The present aim of the work is to develop buccal tablets for the treatment of hypertension and congestive heart failure; an oral route of drug administration has been one of the most convenient routes and novel drug delivery. This concept of mucoadhesion was introduced into sustained drug delivery. Which becomes a major part of the novel drug delivery system in the recent era. Some of the potential sites for attachment of any mucoadhesive system are included in the buccal cavity, nasal cavity, eyes, vagina, rectal, sublingual route, and gastrointestinal area. Mucoadhesive polymers are able to interact with mucus which is secreted by the underlying tissue.

The concept of the mucoadhesive polymer has been accepted as a promising strategy to prolong the residence time and to improve localization of drug delivery systems on various membranes. Buccal delivery of drugs is an alternative to oral route of drug administration; this buccal route has numerous advantages like good convenience, the toughness of epithelium, sudden removal of dosage form in case of need, relatively low enzymatic activity, prevent drug degradation in gastro intestinal tract by avoiding hepatic first pass metabolism. Enalapril maleate to a class of angiotensin receptor antagonist which acts by binding selectively and non-competitively to angiotensin II receptor type 1, thus preventing actions of angiotensin II.

Spectrum Scanning: 10 µg/ml concentration of a drug is taken for spectrum scanning, scanning was done with 400 to 200 nm, maximum absorbance was found at 212 nm, in 6.8 pH Phosphate buffer as shown  in Table 1. 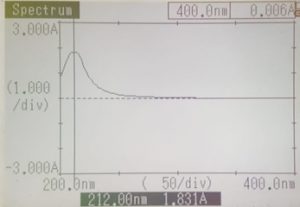 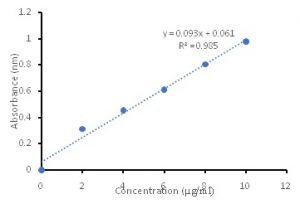 Preparation of Double Layered Buccal Tablets: The formulations were prepared as shown in Table 1; each tablet contains 20 mg of Enalapril maleate before direct compression, all the ingredients were screened through sieve no 100.

The backing layer (EC) was compressed using an 8.0 mm flat-faced punch on a tablet compression machine. Enalapril Maleate was mixed manually with different ratios of Carbopol, PVP K-30, HPMC K-100M, and Chitosan as mucoadhesive polymers and mannitol as a diluent for 10 min.

The blend was mixed with magnesium stearate for 3-5 min and then compressed into tablets by the direct compression method using 8 mm flat-faced punches. The tablets were compressed using a sixteen station CEMACH rotary tablet punching machine. The composition of the prepared bioadhesive buccal tablet formulations of Enalapril Maleate was given in Table 2.

Weight Variation Test: A weight variation test was performed for ten tablets from each batch using an electronic balance (Shimadzu, Model: AUW220D); an average value with standard deviation was calculated, as given in Table 3.

Thickness: The thickness of the buccal tablet was determined by using a screw gauge. Five individual tables from each batch were taken, and an average with standard deviation was calculated, as given in Table 3.

Hardness: A hardness test was conducted for five tablets from each batch using Monsanto tester, and the average with standard deviation was calculated as given in Tablet 3.

Assay: The tablet was performed for buccal tablet without backing membrane, 6 tablets were selected at random and were powdered in a mortar by using a pestle, calculate the amount of powder is taken, which is equivalent to single-dose was dissolved in 6.8 phosphate buffer by sonication for 30 min and filtered through Whatman filter paper. The drug content was analyzed spectrophotometrically at 212 nm using a UV-spectrophotometer.

Surface pH Study: The buccal tablets were made in contact with 1 ml of water and kept aside to swell for 2 h at room temperature. The pH was measured by bringing the PH meter electrode in contact with the surface of the tablet, periodically at 1, 2, 3, 4, 5, 6, 7, and 8 h. Values were recorded, as shown in tablet no 3.

Measurement of Bioadhesive Strength: Bio-adhesive strength of the tablet was measured the using sheep buccal mucus  membrane, procured from the slaughter house. The tissue was washed thoroughly with 6.8 pH Phosphate buffer. The membrane was adhered to the base of the equipment and hydrated using 6.8 pH Phosphate buffer. One side of the tablet was sticked onto the plastic vial cap and the cap was tied to the nylon thread. Other end of the thread was tied to a plastic cup containing counter weight. Thus, the thread was allowed to pass through two pulleys. Now the tablet was placed over the membrane and 50 g weight was placed over the tablet for 15 minutes to induce mucoadhesion. After 15 minutes, an increment of 0.1 g of weight was added to the cup and the counter weight at which the tablet detaches from the membrane was determined.

Swelling Study: The swelling studies of buccal tablets. The test was performed for buccal tablets with backing membrane, buccal tablet was weighed individually initial weight was (W1) and placed in petri dish containing 5 ml of phosphate buffer (pH 6.8) solution tablet is placed in petri dish which shows backing membrane being viewed from top. Tablet were soaked in such a way that a tablet completely immersed in the buffer solution at regular intervals (1, 2, 3,4, 5,6, 7 and 8 h) the buccal tablets were removed from the petri dish by using forceps and excess of water around the tablet is removed by using Whatman’s filter paper. The swollen tablet was reweighed (W2) the degree of swelling was calculated according to the following equation.

In-vitro Drug Release Studies: The USP II apparatus rotating paddle method was used to study the release of drug from buccal tablets, the dissolution medium consists of 500 ml of phosphate buffer pH 6.8 with constant maintains of temperature at 37 ± 0.2 °C and 50 rpm rotational speed of paddle. The backing layer of the tablet was attached to a glass slide with adhesive. The slide was placed at the bottom of the vessel for unidirectional release of drug from the buccal tablet; at regular predetermined time intervals, samples of 2 ml were withdrawn, and an equal amount of buffer is replaced. The sample is filtered with Whatman filter paper and analyzed by appropriate dilution by UV spectrophotometer at 212 nm.

Release Kinetics of the Optimized Formulation: The optimized batch's in-vitro release data was fitted to various kinetic models (Zero-order, First-order, Higuchi, and Korsmeyer-Peppas models). The best fit was found out to describe the kinetics of drug release.

RESULTS AND DISCUSSION: Compatibility study: From the FT-IR study, the drug was found to be compatible with all the excipients, as shown in Fig. 3 & 4 and Table 3.

These results recommended that the formulation is suitable for oral application and they were not irritant to the buccal mucosa. Surface pH values for all the formulations are shown in Table 4.

Disintegration Time: According to the USP, buccal tablet should disintegrate within 4 h. All though all the formulations disintegrated within a given time. The disintegration time was found to be in the range of 226.67 ± 1.21 to 164.16 ± 2.48 min for F1-F8 are close to 4 h.

In-vitro Drug Release Profile: In-vitro drug release studies were conducted in phosphate buffer pH 6.8, and the studies revealed that the release of Enalapril Maleate from different formulations varies with characteristics and composition of polymers, as shown in Table 5 and Graph 5. 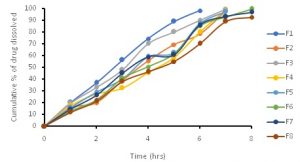 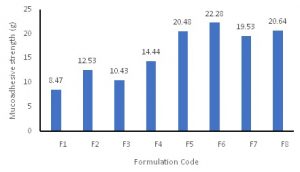 Swelling Studies of Buccal Tablets: Appropriate swelling property of a buccal device is essential for uniform and prolonged release of drugs and proper bioadhesion. The polymeric tablet formulations displayed an increase in weight due to water uptake. The mucoadhesive polymers (Carbopol, and Chitosan with HPMCK 100M) used in the study were hydrogels that swellable upon contact with water and retained a large amount of water. Chitosan hydrophobic nature. So, it did not absorb a sufficient amount of water and showed a lesser swelling index. The viscosity of the polymer affects the swelling index. The higher swelling index may lead to reduced bioadhesive strength, and too low a swelling index may not be producing sufficient bioadhesive strength. So, the optimum swelling index was produced by the formulation containing Chitosan with a combination of Carbopol. 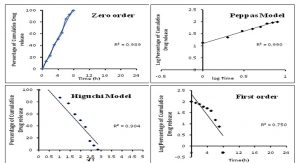 CONCLUSION: Bioadhesive buccal tablets of Enalapril Maleate were prepared to avoid the first-pass metabolism and to improve bioavailability. These are prepared by the direct compression method. Various physicochemical parameters tested for all the formulations showed good results.

From the results, it was concluded that the in-vitro drug release showed maximum drug release in formulation F6; further, studies like moisture absorption studies, swelling studies, and ex-vivo permeation studies of the optimized formulations are suitable for buccal delivery.

ACKNOWLEDGEMENT: The author is thankful to Annamalai University Chidambaram and Mohamed sathak A. J. College of Pharmacy, Chennai for providing necessary facilities.

CONFLICTS OF INTEREST: There are no conflicts of interest to publish this article in this journal.