ABSTRACT: Protein drug delivery has emerged to be an important area of research in the field of novel drug delivery technology. The objective of the study was to prepare poly (D, L-lactide-co-glycolide) (PLGA) microspheres containing bovine serum albumin (BSA) as a  model  drug  and  to  evaluate  the  various  physicochemical  characteristics  of  the formulations, namely morphology, particle size, FTIR, DSC, BSA encapsulation  efficiency  and   in-vitro  BSA  release profile. BSA-loaded microspheres were  prepared  by  double  emulsion  solvent  evaporation  method  with  different  BSA: PLGA  ratios  and  at  different  speeds  of  homogenization  keeping  the  amount  of  BSA constant in all the formulations. Out of those 1:10 was selected as a optimized (drug: polymer) for BSA loaded PLGA microspheres, there after internal parameters like volume of inner aqueous phase(2ml), volume of DCM(10ml), concentration of polymer (9.09%),speed of homogenization, were selected as a optimized formulation parameters. Accelerated  stability  testing  was  performed  with  the  optimized formulations  for  a  period  of  eight  weeks. The  mean  particle  size  and  encapsulation efficiency  of  the  microspheres  were  found  to  decrease  as  the  speed  of  homogenization increased.  And  the  same  were  found  to  increase  simultaneously  with  increase  in  the amount of polymer. The in vitro release study showed a slow and steady release pattern of BSA. Accelerated stability studies indicated that formulations here stable during the period of study. Thus, a sustained release formulation of protein loaded PLGA microspheres was developed

INTRODUCTION: Microspheres have played a vital role in the development of controlled/sustained release drug delivery systems. Microspheres have been of particular interest from the pharmaceutical point of view providing the possibility to achieve sustained and controlled drug release 1. In a very short time, since their emergence, the field of controlled delivery of proteins has grown immensely. Because of their relatively large size, they have low transdermal bio-availabilities. Oral bioavailability is generally poor since they are poorly absorbed and easily degraded by proteolytic enzymes in the gastrointestinal tract ocular and nasal delivery is also unfavorable due to degradation by enzymes present in tissues and nasal mucosa, thus parenteral delivery is currently most demanding and suitable for delivery of such molecules. In systemic delivery  of proteins, biodegradable microspheres  as parenteral depot formulation  occupy an important place because of  several  aspects like  protection of sensitive proteins from degradation, prolonged or modified release, pulsatile release patterns. The main objective in developing controlled release  protein injectables  is avoidance of regular invasive doses which in turn provide patient  compliance, comfort as well as control over blood levels. BSA  is a water-soluble protein, which is chosen for loading in to  microspheres, development of microspheres  containing  BSA successfully  gives a way for  further development of other proteicious drugs, which have similar properties of BSA 2. Among the various tentative for improving the administration of proteins, the microencapsulations into biodegradable polymers 3 represent a practical and promising approach. On the other hand, biodegradable microspheres can be injected 3 subcutaneously or intramuscularly and release the entrapped proteins for extended periods of time 4.

In this organic phase, aqueous drug solution is emulsified using high speed homogenizer (IKA) operating around 10000 rpm for about 5 minutes to prepare water¹ /oil (w1/o) primary emulsion. This primary emulsion is added to external aqueous phase containing surfactant (poly vinyl alcohol is used to prepare w¹/o/w² emulsion) at homogenizer speed around 8000 rpm for 3 minutes and then shifted to mechanical stirrer which was stirred at 1000 rpm for 1 hour at 2-8oC then next 2 hrs at room temperature to permit evaporation of DCM.

The microspheres obtained is collected by centrifugation, filtration and then dried. Formed microspheres are evaluated 5.

Percentage yield: The prepared microspheres were collected and weighted. The actual weight of obtained microspheres divided by the total amount of all material that was used for the preparation of the microspheres multiplied by 100 gives the % yield of microspheres (equation) 7:

Drug entrapment efficiency: The amount of drug entrapped was estimated by dissolving the 100mg of microspheres in DCM and water in 3:1 ratio ,under vigorous shaking for 1hr, the resultant solution is centrifuged, both layers were separated, cytarabine was soluble in water but not in DCM. The drug content in aqueous solution was analyzed Spectrophoto-metrically by using UV-Vis spectrophotometer at 272.7nm with further dilutions against appropriate blank. The amount of the drug entrapped in the microspheres was calculated using the formula 6:

Theoretical weight of drug in sample

In-vitro Drug Release: An in vitro release method using a regenerated cellulose membrane dialysis apparatus (Float-a-Lyzer) was suitable for studying in vitro release of cytarabine-loaded biodegradable microspheres. Microspheres suspension containing known amount of drug was placed in Float-a-Lyzer. The Float-a-Lyzer was placed in beaker containing 50ml of PBS (pH 7.4), maintained at 37oC and stirred with the help of a magnetic stirrer. Aliquots (2ml) of release medium were withdrawn at different time intervals and the sample was replaced with fresh PBS (pH 7.4) to maintain constant volume and sink conditions. The samples analyzed for drug content by UV-Vis Spectrophotometer at 272.7nm. After every one week the complete medium was withdrawn   and replaced by fresh medium to avoid saturation of the medium.

Stability studies: To assess the physical and chemical stability of the microspheres, stability studies were conducted for 2 months under various storage conditions mentioned in ICH guidelines. The sample containing optimized formulation were placed in vials and stored at 40±2oC/75±5% RH. After 60 days the formulations were checked for physical appearance and drug content.

TABLE 2: THE FORMULATION COMPOSITION AND RATIOS OF BSA MICROSPHERES

Standard calibration curve of BSA in UV Spectro photometer: The UV absorbance’s of BSAstandard solution in the range of 10-50 µg/ml of drug in buffer, pH 7.4 showed linearity at λ max 279nm. The linearity was plotted for absorbance against concentration with R2 value 0.9991 and with the slope equation y=0.0006x-0.0033. The absorbance values and standard curve shown in Figure 1. 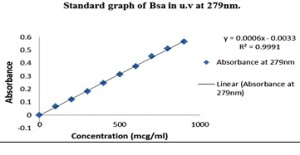 FIGURE 1: STANDARD GRAPH OF BSA IN PHOSPHATE BUFFER OF pH 7.4

Compatibility Studies:The compatibility between the drug and the selected polymer and other excipients was evaluated using FTIR peak matching method. There was no appearance or disappearance of peaks in the drug-polymer mixture, which confirmed the absence of any chemical interaction between the drug, polymer and other excipients. The results are shown in Table 3 and Figure 2, 3, 4.

Formulation optimization: The Microspheres were prepared by double emulsion technique using homogenizer (IKA). Formulations was optimized for in vitro release profile , particle size and entrapment efficiency. The drug polymer ratio was 1:10 for optimized formulation, PVA concentration was 0.5%, aqueous phase volume was 2ml and DCM volume was 10ml. The formulation containing BSA kept at constant strength was prepared with different ratios of DCM, poly l-lactic acid, PVA, water and all other parameters like temperature and rpm were optimized.

Among those compositions, 3 Formulations are selected as optimized batches for further evaluation based on in vitro dissolution profile and entrapment efficiency.

Scanning Electron Microscopy: SEM micrographs and typical surface morphology of the microspheres are given in Fig. 5-6 for F5, F6 formulations. It was observed that microspheres were spherical with smooth surface. 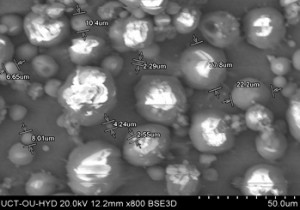 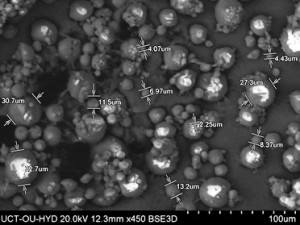 Particle Size Distribution: The particle size distribution was analyzed for F5, F6, F7 formulations of BSA microspheres by wet method.  The  particle  size  was  optimum  in  F5 Formulation, When compared to F6 and F7, The results were shown in Table 5 and Figure  7, 8, 9.

In-vitro cumulative % Drug Release Profile: The in vitro dissolution profile of prepared formulations was determined by modified dissolution apparatus method. The dissolution was carried out for a period of 30 days in 7.4 pH phosphate buffer. The cumulative percent release of F1-F8 formulations at various time intervals was calculated and tabulated in Table 6 for F5 formulation 86.8% drug release was achieved on 30th day. 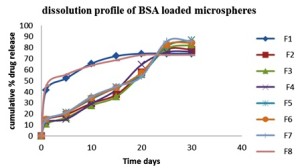 FIGURE 10 : COMPARISON OF CUMULATIVE % DRUG RELEASE OF ALL FORMULATIONS 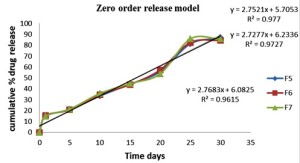 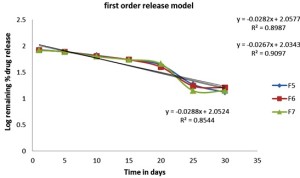 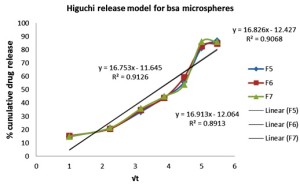 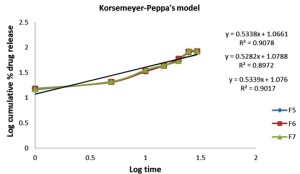 Stability test: The stability of the BSA microspheres was evaluated after storage at 40oC/75%%RH and room temperature for 60 days. The assays of the samples were determined as a function of the storage time. The microspheres stored at 40oC were found to be stable for duration of 60 daysdays (table 8).

Differential Scanning Calorimetry (DSC): In order to confirm the physical state of BSA in microspheres, DSC of BSA, PLGA, physical mixture of BSA and polymer, BSA microspheres formulations were carried out and were shown in graph .The DSC trace of BSA showed a sharp endothermic peak 68.6oC. the physical mixture of BSA and polymer showed same thermal behavior 69.1oC, as the individual component, indicating that there was no interaction between drug and polymer in solid state.

The reported melting point range of BSA is between 68oC-70oC, thus indicating there is no change of BSA in pure state, physical mixture of drug and polymer. . The absence of endothermic peak of the BSA at 68.6 oC in the DSC of the BSA microspheres suggests that the BSA existed in an amorphous or disordered crystalline phase as a molecular dispersion in polymeric matrix10. 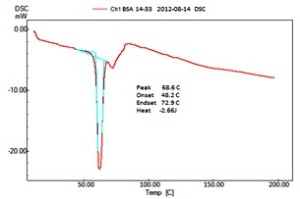 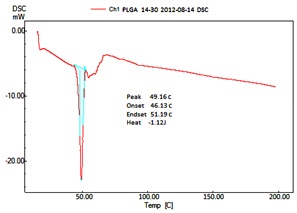 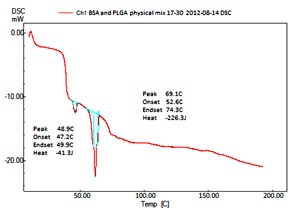 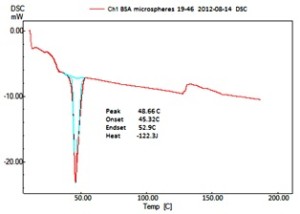 CONCLUSION: The conclusions drawn from the present investigation are given below: