Celecoxib, a selective cyclo- oxygenase – 2 inhibitor has been recommended orally for the treatment of arthritis and osteoarthritis. Long term oral administration of celecoxib produces serious gastrointestinal side effects. Therefore the aim of the present investigation was to assess the potential of nanosized emulsion formulations for transdermal delivery of celecoxib (CXB), to reduce the side effects produced by oral administration of the drug, to increase the stability and to produce a novel controlled delivery system with better pharmaceutical and therapeutic properties. Optimized oil in water nanosized emulsion of celecoxib was prepared by ultra sonication method. The prepared nano- sized emulsion was subjected to physical characterization, Drug content analysis and stability tests. Skin permeation mechanism of celecoxib from nanosized emulsion was evaluated by In-vitro skin permeation studies, activation energy measurement and histopathological examination. The anti-inflammatory effects of formulations were compared with marketed formulation by carrageenan-induced paw edema in rats. The nanosized emulsions showed acceptable physical properties and exhibited slow drug release. Photomicrograph of skin sample supports the in-vitro skin permeation data of Celecoxib. The Results revealed that the nanosized emulsion was able to cross the skin and produce expected Anti inflammatory and Analgesic effect. These results suggested that nanosized emulsions can be used as potential vehicles for improved transdermal delivery of Celecoxib.

INTRODUCTION: Non steroidal anti-inflammatory (NSAIDs) are the most commonly used drugs to reduce pain and inflammation 1. Celecoxib (CXB), a selective cyclo-oxygenase-2 (Cox-2) inhibitor, has been recommended orally for the treatment of arthritis and osteoarthritis. It is marketed as capsule form of 100and 200mg which possess poor solubility, stability and bioavailability. Long-term oral administration of CXB causes serious gastrointestinal side effects 2.Therefore, an improved CXB formulation with a high degree of permeation could be useful in the treatment of locally inflamed skin and inflammatory and painful states of body like bones, ligaments etc. One of the most promising techniques for enhancement of transdermal permeation of drugs is the micro emulsion (or) nanoemulsion technique 3, 4. Nano emulsions are thermodynamically stable transparent (translucent) dispersions of oil and water stabilized by an interfacial film of surfactant and co surfactant molecules having droplet size less than 100 nm 5, 6.This paper describes the potential of the nanosized emulsion system in transdermal delivery of CXB using pharmaceutically acceptable ingredients. The formulation of Celecoxib nanosized emulsion was aimed to reduce the side effects of marketed capsule dosage form, to improve the stability and to produce a controlled drug delivery system.

Celecoxib Solubility in Single Oil (Or) Oil Mixtures: 5 ml of the selected single oil (castor oil, coconut oil, sesame oil and arachis oil) or the selected oil mixtures in 3:2 ratio (castor oil :  sesame oil, castor oil: coconut oil and sesame oil: arachis oil) were taken in a 50 ml beaker. To this 25 mg of celecoxib was added slowly into the beaker with constant stirring.  The procedure was repeated until traces of drug molecules remain un- dissolved at the bottom of the beaker. In some cases, the drug-oil mixtures were heated to attain a saturated solution. The experiment was repeated three times with each one of the oil or oil mixtures. The reported value was the mean of the three determinations 7, 8.

Droplet Size Analysis: Droplet size distribution of optimized nanosized emulsion was determined by photon correlation spectroscopy, using a zetasizer 1000 HS (Malvern Instruments, UK). Light scattering was monitored at 250C at a scattering angle of 900. A solid-state laser diode was used as light source. The nanosized emulsion sample was suitably diluted with distilled water and filtered through 0.22 µm membrane filter to eliminate multiscattering phenomena. The diluted sample was then placed in quartz couvette and subjected to droplet size analysis 10.

Stability Assessment of Nanosized Emulsion: The Celecoxib nanosized emulsion was stored at 24ºC, 60% RH and 37 ºC, 75% RH in air tight glass bottle for 45days as a short term study. The samples were taken at the end of 45days 12.The samples were evaluated for physical characteristics including appearance, odor, sedimentation, re- dispersibility and drug content, invitro skin permeation studies.

Preparation of Full Thickness Rat Skin: Male Wistar rats were sacrificed with prolonged ether anesthesia and the abdominal skin of each rat was excised. Hairs on the skin of animals were removed with electrical clipper, subcutaneous tissues were surgically removed and dermis side was wiped with isopropyl alcohol to remove residual adhering fat. The skin was then washed with distilled water, wrapped in aluminium foil and stored in a deep freezer at -20°C till further use.

Preparation of Epidermis and Stratum Corneum: The skin was treated with 1 M sodium bromide solution in distilled water for four hours. The epidermis from full thickness skin was separated using cotton swab, which was moistened with water. Epidermal sheet was cleaned by washing with distilled water and dried under vacuum and examined for cuts or holes if any. Stratum corneum (SC) samples were prepared by floating freshly prepared epidermis membrane on 0.1% trypsin solution for 12 hrs. Then SC sheets are cleaned by washing with distilled water.

Determination of Activation Energy: In vitro skin permeation study of CXB across rat skin was carried out at, 37 °C in the methanolic PBS of pH 7.4 (30:70). The studies were performed on a modified Keshary- Chien diffusion cell with an effective diffusional area of 4.76 cm2 and 35 ml of receiver chamber capacity. In the donor compartment, 1 ml of Nano emulsion formulation was taken. Receiver compartment was composed of the vehicle (methanolic PBS pH 7.4). Samples are withdrawn at regular intervals (2, 4, 6, 8 and 12 hours) and filtered through 0.45 µm membrane filter and analyzed for percentage drug release by UV spectrophotometer at 255 nm.

Permeability coefficients were calculated at the above said temperature and activation energy of CXB was determined from Arrhenius relationship given as follows 10, 13, 14.

Where, Ea is the activation energy, R is gas constant (1. 987 kcal/mol), T is absolute temperature in K, P is the permeability coefficient, and Po is the Arrhenius factor.

Histopathological Examination of Skin Specimens: Abdominal skins of Wistar rats were treated with optimized celecoxib nanosized emulsion (F-II) in methanolic phosphate buffer pH 7.4. After 24 hours, the rats were sacrificed and the skin samples were taken from treated and untreated (control) areas. Each specimen was stored in 10% formalin solution in methanolic PBS pH 7.4. The specimens were cut into section vertically. Each section was dehydrated using ethanol, embedded in paraffin for fixing and stained with hematoxylin and eosin. These samples were then observed under light microscope and compared with control sample. In each skin sample, three different sites (epidermis, dermis and subcutaneous fat layer) were scanned and evaluated for mechanism of skin permeation enhancement 10, 15.

Anti Inflammatory Studies: The anti-inflammatory and sustaining actions of the optimized formulations were evaluated by the carrageenan-induced hind paw edema method in Wistar rats. Young male Wistar rats, weighing 180–220 g, were randomly divided into 4 groups for control, F-I, F-II and marketed formulation, (F-III) each containing 6 rats. The animals were kept under standard laboratory conditions, temperature at 25 ± 1 °C and relative humidity (55 ± 5%). The animals were housed in polypropylene cages, six per cage, with free access to standard laboratory diet (Lipton Feed) and water ad libitum. Doses for the rats were calculated based on the mass of the animals according to the surface area ratio. The abdominal region of the rats was shaved 12 h before starting the experiments, except in the control group. Celecoxib formulations F-I, F-II, and F-III were applied on the shaved abdominal region of all animals (except in the control group) half an hour before sub planter injection of carrageenan into right paws. Paw edema was induced by injecting 0.1 mL of 1% (wv) homogeneous suspension of carrageenan in distilled water. The paw volume was measured at 0, 1, 2, 4, 6 and 24 h after injection using a digital Plethysmometer. The amount of paw swelling was determined from time to time and expressed as percent edema relative to the initial hind paw volume. Percent inhibition of edema produced by each formulation treated group was calculated against the respective control group 8, 16.

Study of Analgesic Effect on Rat using Tail Flick Method: Weigh and number the rat. Take basal reaction time to radiant heat by placing the tip (last 1-2 cm) of the tail on the radiant heat source. The tail withdrawal from the heat (Flicking response) is taken as the end point. Normally a rat withdraws its tail within 3-5 sec. A cut off period of 10-12 sec is observed to prevent damage to the tail .Any animal failing to withdraw its tail in 3-5 sec is rejected from the study. Take at least 3-5 basal reaction times for each rat at a gap of 5 minutes to confirm normal behavior of the animal. Celecoxib formulations F-II and F-III were applied transdermally (except in the control group) and the reaction time at 15, 30, 60 and 120 minutes were noted. As the reaction time reaches 10 sec it is considered as maximum analgesia and the tail is removed from the source of heat to avoid tissue damage. Calculate percentage increase in reaction time (index of analgesia) at each time interval 17.

All the values are expressed as mean ± standard deviation n =3

Physical Characterization of Nanosized Emulsion: The droplet size of the nanosized emulsion was found to be 200± 26 nm. All the droplets were found in nanometer range which indicated the suitability of formulation for Transdermal drug delivery. Particles with zeta potentials more positive than +30mVand more negative than -30mV are normally considered stable. The nanosized emulsion demonstrated a greater zeta potential +40.02 ± 1.20mV (increasing positive charge), which indicates the dispersion stability. 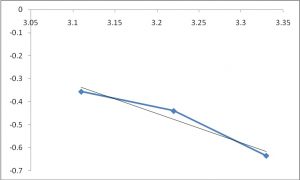 Histopathological Results: The photomicrographs of control (untreated skin) showed normal skin with well defined epidermal and dermal layers. Keratin layer was well formed and lied just adjacent to the top most layer of the epidermis. Dermis was devoid of any inflammatory cells. Skin appendages were within normal limits (fig. 3). 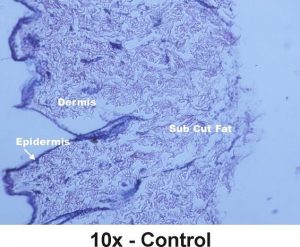 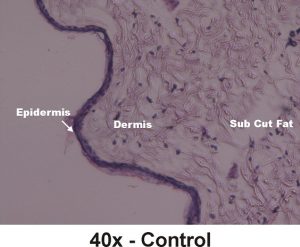 When the skin was treated with nano sized emulsion formulation (F-II) for 24h, significant changes were observed in the skin morphology. Low power photomicrograph of skin sample showed epidermis with a prominent keratin layer, a normal dermis and subcutaneous tissues. High power photomicrograph of skin sample showed a thickened and reduplicated stratum corneum with up to 8 distinct layers. The epidermis showed increase in its cellular layer to 4-6 cells. Dermis does not show any edema or inflammatory cell infiltration. The disruption of lipid bilayers was clearly evident as distinct voids and empty spaces were visible in the epidermis region (Refer Fig. 4). These observations support the in vitro skin permeation data of C X B. 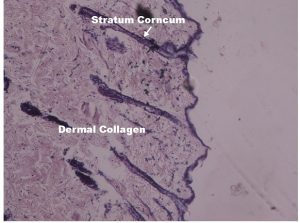 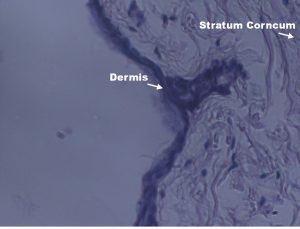 ACKNOWLEDGEMENTS: The authors wish to thank micro labs pharmaceuticals, Hosur (India), for the gift sample of Celecoxib. They are also grateful to Dr. S. Tamilvanan for his valuable guidance and Anna University Trichy, for providing necessary facilities.