FORMULATION AND EVALUATION OF CHITOSAN BASED BUCCAL PATCH OF GRANISETRON HYDROCHLORIDE

FORMULATION AND EVALUATION OF CHITOSAN BASED BUCCAL PATCH OF GRANISETRON HYDROCHLORIDE

INTRODUCTION: There  is  need  to  develop  a  dosage  form  that  bypasses  first  pass  metabolism and GI  degradation. Oral  cavity  provide  route  for the  administration of  therapeutic  agent  for  local  as  well as systemic delivery,  so  that  first  pass  metabolism  and  GI  degradation  can  be  avoided. The  buccal  route  was  chosen  because  of  its  good  accessibility,  robustness  of  epithelium, facile  removal  of the  dosage  form,  relatively  low enzymatic  activity  and  natural  clearance  mechanism for  elimination  of  the  drug from buccal area, satisfactory  patient  acceptance and avoiding the hepatic  first  pass metabolism 1.

If patient started vomiting,  oral  route  cannot  be used and some alternative routes of administration  like parenteral, transdermal, rectal or buccal  administration  are  needed.  Amongst  all,  parenteral  require  skillful person as well as hospitalization.  When  we  consider rectal route, it take  lag  time  to  show  antiemetic  action and  is  quite unacceptable route  by  the  patient.

But  if  we  consider  buccal  route,  it  may  provide  advantages  of  other routes.

Literature  survey  indicated  that  GRA.HCl  can  be  a  good  candidate  for  the  buccal  drug  delivery  system  and  also  no  work  is  reported  for  the  development  and  evaluation  of  GRA.HCl  as  a  buccal  patch.  Hence,  we  tried  to  develop  buccal  drug  delivery  system  containing  GRA.HCl.  Being  a  non-toxic,  biocompatible  and  biodegradable  polymer,  chitosan  has  been widely  used  for  pharmaceutical  and medical  applications.  Chitosan  was  considered  as  a  good  bioadhesive  material  for  the  present  study 4, 5.  Hence  development  of  buccal  patch  of  GRA.HCl  providing  immediate  onset  of  action  followed  by  sustained  release  of  drug  so  as  to  have  effective  antiemetic  therapy  for  longer  period  of  time  is  the  need  of   an  hour.

In  this  study  attempt  was  made  to  develop  a  GRA. HCl  buccal  patch  which  will  initially  release  drug  immediately  followed  by  prolonged  release,  thus  avoiding  presystemic  metabolism  and  overcoming  the  limitation  of oral  route.

Preparation of Buccal  Patches: The  mucoadhesive  buccal  patches were prepared  by solvent  casting  method in different concentration of chitosan as  given  in  Table 1.

The  polymeric  solution  of  chitosan  was  prepared  using  1.5%v/v  acetic  acid  in  distilled  water  with  occasional  stirring  for  48  hr.  The  resultant  viscous  chitosan  solution  was  filtered  through  nylon  gauze  to  remove  cell  debris  and  suspended  particles.  Propylene  glycol  was  added  as  a  plasticizer  under  constant  stirring.  The  resultant  solution  was  left  overnight  at  room  temperature  to  ensure  clear  bubble  free  solution.

Content  uniformity: Drug  content  uniformity  was  determined by dissolving  the  buccal  patch  from  each  batch by homogenization in 100ml of a  phosphate  buffer  (pH  6.8)  for  6 hr under  occasional  shaking. 5ml solution was taken  and  diluted with  phosphate  buffer pH 6.8 up to  20ml and the  resulting  solution was  filtered  through  a  0.45µm  syringe  filter. The drug content  was  then  determined  after  proper dilution at 302nm using a UV Spectro-photometer.

Moisture  absorption  study: The  moisture  absorption  study  gives  an  indication about  the relative  moisture  absorption capacities of polymers and an idea  whether  the formulation maintains its integrity after absorption  of moisture, 5%w/v agar in distilled water, in hot  condition, was transferred into petri plates and  it  was allowed to solidify. Six patches of each  formulation were selected  and  weighed.  The  patches  were  placed  in  desiccator  overnight  prior  to  the  study  to  remove  moisture if any  and laminated  on  one side with water impermeable backing membrane. They  were placed on the  surface of the  agar and  incubated  at  37oC  for  1  hr  in  incubator.  The  patches  were  removed  and  weighed  again.  The  percentage  of  moisture  absorbed  can  be  calculated  using  the  formula:

Surface Study of the Patch: Surface  of  the  patch  was  studied  by  optical  microscopy  with  digital  camera  (Olympus). 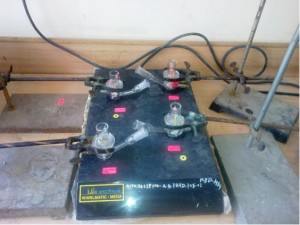 The  receptor compartment  was  covered  with  water  jacket  to  maintain  temperature  37oC.  The  receptor  chamber  was  filled  with  pH  6.8  PB  and  buccal  epithelium  was mounted  over  it.  Buccal  mucosa  was  allowed  to stabilize  for  the  period  of  1  hr.  After  stabilization, patch  was  kept on epithelium  and  periodically  (for  8  hr)  samples  were  withdrawn  and  maintained  sink  condition. The  aliquot  were  analyzed  spectrophotometrically  at  302nm. The  drug  permeation  was  correlated  with  cumulative  drug  released.

Kinetics  of  drug  release:  Curve  fitting  and  model  fitting: The  dissolution  profile  of  all  the  batches  were  fitted  to  various  mathematical  models  for  describing  the release mechanism  for buccal  patches;  Kosmeyer-Peppas,  zero  order  and  Higuchi release  model to ascertain  the  kinetic  modelling of drug  release  by  using  a (PCP Disso  V  2.08)  software and  the  model  with  the higher correlation coefficient  was  considered  to  be  the  best  fit  model.

Statistical  Analysis: A 32 full factorial design was  selected and  2 factors were evaluated  at 3 levels, respectively. The statistical treatment and inter-pretation of data was done by  Stat Ease Design  expert  8.05  software. The analysis of variance (ANOVA) was  calculated.  The  data were subjected to 3D  response  surface methodology to study the interaction of independent  variables.

RESULTS  AND  DISCUSSION: Chitosan and Na-alginate  were  selected  as  the  bioadhesive  polymers  because  of  their  excellent  bioadhesive  properties.

In the preparation of the patch concentration,  plasticizer  play  an  important role in flexibility and  formation of  the patch. Propylene  glycol  is  used  as  a  plasticizer.  Hence,  from  the  result  given  in  Table  2.

If  the  patch  was  dried  for  less  than  8  hr  then  it  contained  some  amount  of  moisture  that  looses  physical  properties  of  the  patch  and  if  patch  was  over  heated  then  patch  loses  its  integrity,  breaks  easily.  Hence  at  8  hr  drying,  patch  was  found  with  optimized  moisture  and good  physical  properties. The  various  parameters  of  prepared  patches  were  evaluated as per prescribed method. Evaluation  parameters  are  shown  in  Table  4.

The  swelling  index  of  all  patches  were  good.  From  the  study;  it  was  observed that the rate of swelling has direct correlation with amount of chitosan  present Sodium  alginate  polymer  is  hydrophilic  in  nature, due  to  this  patches  detaches  from  the  mucosa. Among  the  all  formulation  F5 shows highest mucoadhesion time. Concentration of mucoadhesive polymer increased there was increase in mucoadhesive  strength of the  patch. But due  to  presence  of  the  hydrophilic  polymer  the  mucoadhesive  strength  set  decreased. The F7 formulation showed highest  mucoadhesive  strength  380.976NM-2.  Surface study of the patches showed  that  there  are  the  uniformity  in  thickness  within  a  patch  and  there  were  no  air  entrapment  in  the patch.   Surface  study  showed  in  the  Fig. 2. 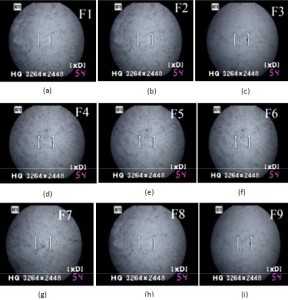 This may  be  attributed  to  the  fact  that  increase  in  hydrophilic  polymer  conc. i.e. sodium alginate,  because  of  its  low  bioadhesive  properties  may  get  detached  from  the  mucosal  surface  and  results  in  less  permeation  in addition  to the fact  that  increase  in chitosan  concentration causes increase in swelling and viscosity resulting in increase in tortuosity. Graphical  representation of ex vivo permeation studies are  shown  in  Fig.  3,  Fig.  4,  Fig.  5. 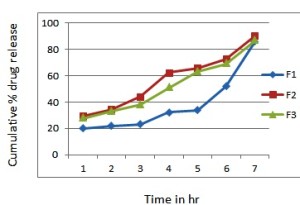 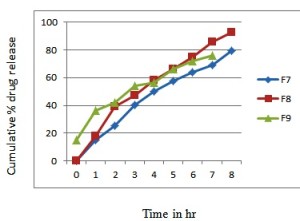 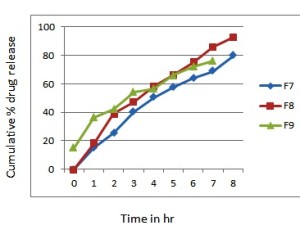 If  the  amount  of  polymer  is  increased  in  order  to  prevent  sudden  release  of  drug  in  first  hour.  The  F3  have  shown maximum  drug  release  in  first  hour.  Increased in the concentration of the chitosan,  release  of  the  drug  get  retarded  due  to  high  polymeric  content.  But  as  the  concentration  of  the  sodium  alginate  which  is  hydrophilic  in  nature  increases,  it  enhanced  the  drug  release. 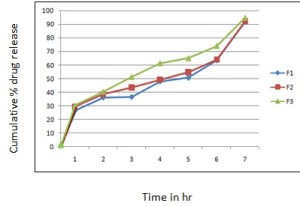 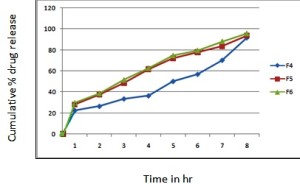 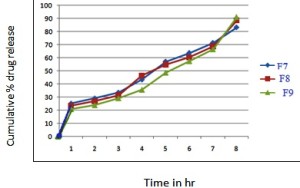 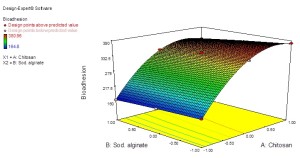 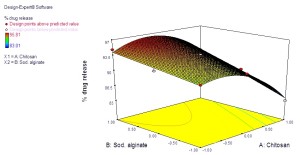 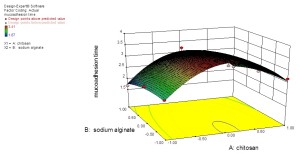 The  effect  of  interaction  of  these  independent  factors  on  the  drug  release  at  various  intervals  can  be  studied  using  the  result  of  statistical  analysis Fig.  9,  10 and 11  represent  the  response  surface plots. The mucoadhesive strength was increased  with  increasing  amount  of  the  chitosan.

Fig. 11  shows  the  response  of  the  mucoadhesion  residence  time  in  hours  in  that  case  as  the  concentration  of  the  chitosan  increases  with  increase  in  time  but  due  to  the  hydrophilic  polymer  i.e  sodium  alginate  which  help  to  detach  the  patch  from  mucosa.  The  correlation  coefficients  of all the three responses were found to be  significant.

CONCLUSION: The objective of work was to  formulate buccal patches of GRA.HCl using combination of hydrophobic and hydrophilic polymer such as  chitosan  and  sodium  alginate  respectively. The mucoadhesive patch  formulation  itself is a critical process  hence, it requires  optimization  at  various  stages.  First  stage  was  the  simple  formation  of  the  chitosan  film.  This  study  reveals  that  the  chitosan  has  good  patch  forming properties with varying  amount.

A  systematic  study  using  32  factorial  designs  was  applied  to  optimize  the  formulation.  The  study  revealed  that  the  amount  of  chitosan  and  sodium  alginate  has  significant  effect  on  mucoadhesive  properties  such  as  swelling  index,  mucoadhesive  strength,  and  mucoadhesion  time  and  release  characteristics  of  the  drug.

It  was  found that the composition of hydrophilic  and hydrophobic polymer concentration plays a very  important role in various buccal patch  evaluation  parameters because of their mucoadhesive and  release  controlling  properties.

Thus,  GRA.HCl  buccal  patches  releasing  drug  upto  8  hr  can  be  successfully  formulated  which  can  be  comfortably  used  by  the  patients  with  improved  bioavailability  with  sustained  release  characteristics.  However  there  is  need  for  further  in  vivo  and  stability  studies.

ACKNOWLEDGEMENTS: Authors are acknowledged  to  the Principal, Government College of Pharmacy,  Aurangabad and AICTE, New Delhi, for financial  assistance.