FORMULATION AND EVALUATION OF CHRONOMODULATED COLONIC DRUG DELIVERY OF NIFIDIPINE

FORMULATION AND EVALUATION OF CHRONOMODULATED COLONIC DRUG DELIVERY OF NIFIDIPINE

ABSTRACT: The pulsatile drug delivery works upon the system that releases active pharmaceutical ingredient completely and rapidly after a desired lag time. This type of approach was advantageous for: Drugswith extensive first pass metabolism and biological tolerance. Locally absorbed or acting drugs to a specific site in the intestinal tract (e.g. colon). Adaptation of therapy according to chronopharmacological needs. The pH-dependent polymers in pulsatile drug delivery were insoluble at low pH levels but with increase in pH solubility of polymer increases. The objective of present study was to develop a pulsatile compression coated tablet. The system was developed into two steps: Firstly core tablet was prepared containing Nifidipine as API. Secondly core tablet was coated with polymer blend of Eudragit S100and Eudragit L100. The lag time was the time in which less than 10% of drug was released. From in vitro release study we had concluded that drug release at pH 6.8 was inversely proportional to the amount of polymer Eudragit L100, which might be due to pH-dependent solubility of Eudragit S 100 at pH above 7. We also concluded that compression coated tablet containing higher proportion of Eudragit L 100 follows Higuchi kinetic model, whereas First order kinetic model was followed by compression coated tablet containing higher proportion of Eudragit S100.

INTRODUCTION: Pulsatile drug release is such a system where drug is released suddenly after well-defined lag time or time gap according to circadian rhythm of disease states. No drug is released from the device within this lag time 1. For achieving this various approaches were developed which were either drug specific (Prodrug) or formulations specific (coated or matrix preparations).

Use of pH-dependent polymers depends on different pH levels throughout the GI tract 2. The polymers described as pH-dependent in pulsatile drug delivery were insoluble at low pH levels but become increasingly soluble as the pH rises 3.

The principal group of polymers used for the training of colon targeted dosage forms has been the Eudragit, more specifically Eudragit L and S. At low pH these polymers were anionic and water impermeable. Eudragit L 100 and S100 were copolymers of methacrylic acid and methyl methacrylate 4. The ratio of the carboxyl ester groups in these polymers was approximately 1:1 and 1:2 respectively. As well as these also form salts and dissolve at a pH above 6 and 7 respectively, this was based on the assumption that the GI pH increases progressively from the stomach to the colon.

In fact, the pH in the distal small intestine was around to 7.5, while the pH of proximal colon was closer to 6 5. The aim of the present study was to develop a pulsatile compression coated tablet. The system was developed in two steps: firstly core tablet was prepared containing nifidipine; secondly core tablet was coated with a polymer blend of Eudragit S 100 and Eudragit L 100 (Enteric polymer).

Six mm diameter drug cores were compression-coated with pH dependent polymer (Eudragit S 100 and Eudragit L 100). The different coat mixtures were shown in Table 1. Compression coated tablet were prepared by first filling half of the polymer blend in the die cavity, then centrally positioning the tablet core on the powder bed followed by filling the remaining half of the polymer blend on top. Then compressed the powder in Cadmach 16 station compression machine with a compression force to obtain tablets with hardness in the range of at 6-7 Kg/cm2.

FT-IR spectra of drug and physical mixture of excipients and drug (1: 1) were recorded with a FT-IR spectrophotometer (Shimadzu Corporation, Japan, 8400s) using KBr disc method. Each sample was gently triturated with KBr powder in a weight ratio of 1: 100 and pressed using a hydrostatic press (Kimaya Engineers, Mumbai, India) at a pressure of 10 tons for 5min. The disc was placed in the sample holder and scanned from 4000 to 500 cm-1 at a resolution of 1cm - 1.

The quality of tablet, once formulated by rule, was generally dictated by the quality of physicochemical properties of blends. There were many formulations and process variables involved in mixing steps and all these can affect the characteristics of blend produced.

Where, ρt is tapped density and ρb is bulk density.

Where, θ is angle of repose; h is height of cone; r is radius of cone.

After compression of powder blends, the prepared tablets were evaluated for weight variation, tensile strength, thickness, friability and drug content.

With the medium change method, the release was performed in pH 1.2 for 2h, followed by pH 6.8 for another 3h and finally, phosphate buffer (pH 7.4) till the endof the 12 h to simulate the pH pertaining to the stomach, proximal and middle small intestine (duodenum and jejunum),and distal small intestine (ileum), respectively. 5mL sample was withdrawn at pre-determined time interval (1, 2, 3, 4, 5, 6, 8, 10 and 12h) and replaced by the fresh dissolution medium. All the samples were filtered and analysed by UV spectrophotometer (to volume, mix and the drug content was analysed spectrophotometrically (Shimadzu, UV-1601) at wavelengths of 350 nm. The lag time was taken as the time of <10% drug released 9.

The release from the different formulations was determined by curve fitting method Data obtained from in vitro release studies were fitted to various kinetic equations. The kinetic models used were:

Where, Q is the amount of drug release in time t, Q0is the initial amount of drug in the microsphere, S is the surface area of the microcapsule and ko, k1 ,and kH are rate constant of zero order, first order and Higuchi rate equations respectively 10. In addition to these basic release models, there are several other models as well. One of them is Peppas and Korsmeyer equation (power law). 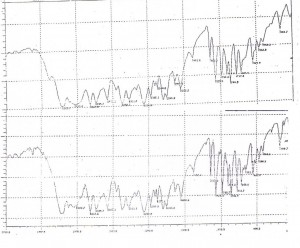 FIG.1: FT-IR SPECTRA OF NIFEDIPINE (a) AND PHYSICAL MIXTURE (b)

Weight variation was found to be within USP limit. The tensile strength of core and compression coated tablets were found to be within the range 3.40±0.06to 4.62±0.34MPa. The friability was below 1% for all the formulations, which is an indication of good mechanical resistance of the tablet. Drug content was observed within the range 92.11±0.10-98.70 ± 0.32%. (Table 3)

The in-vitro release study of the compression coated tablet was carried out using USP rotating paddle method at 100 rpm at 37 ºC. Dissolution study was performed pH 1.2 for 2h, followed by pH 6.8 for 3 h and phosphate buffer (pH 7.4) till the end of the 12 h. Table 4 and Fig.2 shows the drug release profile of different compression coated tablet. Dissolution shows that all tablets compression-coated with pH-dependent polymers showed low release percentage in 0.1 N HCl (pH 1.2) after 2h ranging from 4.8 % to 9.8%. Drug release in phosphate buffer pH 6.8 for another 3 h, CCT 7 exhibited the fastest release. It released 68.34 % of the drug in next 3 h.

On the other hand, CCT 8 showed the slowest release in this medium where it released only 13.55%. Release of the drug from drug in pH 6.8 was inversely proportional to eudragit L 100.This might be due to pH-dependent solubility of Eudragit S100 in pH above 7. 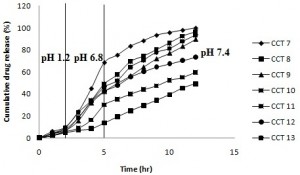