ABSTRACT: The present work aims to formulation and characterization of a topical liposomal gel for ciprofloxacin hydrochloride. The drug lipid interaction studies were carried out by FTIR analysis, X-ray diffraction study, and DSC study, and no changes of physicochemical properties of ciprofloxacin were found. The thin-film hydration method was used for the preparation of liposomes consisting of phosphatidylcholine (PC) and cholesterol (CH). For hydrogel preparation, Carbopol 940 was used. The maximum entrapment efficiency of 79.51 ± 2.395 was found from liposomes formulated with PC/CH at a weight ratio of 30:10 (batch number – F5), and by increasing cholesterol content above this limit, the encapsulation efficiency decreased. All the prepared formulations were found stable and the liposomal gel approach of ciprofloxacin hydrochloride showed better skin residential time than the marketed formulation. The in-vitro drug permeation was found to be around within the range of 0.194-0.319 over a period of 12 h for different batches. In conclusion, ciprofloxacin hydrochloride liposomal hydrogel is a smart and suitable drug delivery system for improving the topical bioavailability of ciprofloxacin hydrochloride to treat various skin disorders.

INTRODUCTION: The human skin is the largest organ of the body, which is making up 16% of total body weight and having a surface area of 1.8 m2. Due to the highly hydrophobic crystalline barrier of the skin, it generally limits the transdermal administration of several poorly soluble drugs 1, 2.

Poor bioavailability of the active pharmaceutical agent from various marketed conventional dosage forms is mainly due to the poor dermal penetration and insufficient residential time on the outermost part of the skin; thus, the therapeutic concentration of many drug substances cannot be achieved at the specific site of application 3, 4.

Fluoroquinolones are the group of antibacterial agents that have shown excellent activity against the most frequently occurring gram-positive and gram-negative ocular pathogens. Among other Fluoroquinolones, Ciprofloxacin is widely used against a broad spectrum of aerobic Gram-positive and Gram-negative bacteria 5. Ciprofloxacin is a water-soluble drug and it is currently the drug of choice as an antibacterial agent for various skin infections like acne, skin rash. The bioavailability of the marketed conventional formulations is very poor so the frequent application is required to maintain therapeutic concentration which leads to poor patient compliance 2.

To prolong the residential time and improve the bioavailability of ciprofloxacin, the introduction of smart drug delivery systems, including vesicular drug delivery systems, like liposomes have recently been proposed. Liposomes are microscopic bilayered vesicles in which an aqueous core is enclosed by a lipid bilayer having size ranges from 30 nm to several micrometers 2, 4. Liposomes can be prepared from various natural or synthetic phospholipids. A closed bilayer structure will form upon hydration of phospholipid in an aqueous solution. The property of liposomal vesicles totally depends on the composition of lipid, surface charge, size of the vesicles, and the method of preparations of the liposomes.

Liposomal drug delivery systems are the most promising approach for topical administration as they are biocompatible, and it can encapsulate both hydrophobic and hydrophilic drug substances due to the amphipathic property of phospholipids 6. These artificial microscopic vesicles consist of one or more lipid bilayers surrounding aqueous part so that the liposomes are widely used as drug carriers for numerous active agents in cosmeceuticals and pharmaceutical Industries. The advantages of liposomes over other conventional topical formulations like ointments, gels, and creams that they can deliver the active drug substances into the cells or even inside individual cellular compartments, and by the liposomal drug delivery approach, the therapeutic index and efficacy of drugs can be increased.

Though it has some limitations like phospholipid undergoes oxidation and hydrolysis like reaction so they are prone to degrade and it has a shorter half-life, and due to having low viscosity it does not allow sufficient residential time at the site of application 7, 8. The viscosity of the liposome can be improved by incorporating the liposomes in biocompatible hydrogel matrices.

MATERIALS: Ciprofloxacin hydrochloride was procured from Alkem Laboratories Ltd, Sikkim, India, as a gift sample. Soy lecithin (Phosphatidylcholine) was purchased from Himedia, India. Cholesterol, Carbopol 940, and Triethanolamine were procured from Sigma-Aldrich, India. All other ingredients used in the study were of analytical grade. Double-distilled water was used throughout the experiments.

Preparation of Liposomes with Ciprofloxacin Hydrochloride: Multilamellar liposomes were formulated by the thin film hydration method described by Berginc et al., 2014. In brief, different molar ratios of phosphatidylcholine and cholesterol were accurately weighed and dissolved in chloroform: methanol mixture (2:1) in a round bottom flask.

The solvent was evaporated using a rotary evaporator (Cyberlab, US) system for at least 1 h at 40 °C. A formed thin film layer of lipid at the bottom of the flask was flushed under a stream of nitrogen for 1 min for the complete removal of the organic solvent part.

The remaining film was then hydrated in 20 mL of phosphate buffer (pH 7.4) containing accurately weighed ciprofloxacin hydrochloride. Small multilamellar vesicles were prepared after the sonication of large multilamellar vesicles for 10 min, using a bath sonicator. The liposomal suspensions were kept at 4 °C and protected from light 6, 8.

FTIR Analysis: The only objective of this experiment was to evaluate whether there is any interaction between the lipid and ciprofloxacin hydrochloride. The compatibility between cipro-floxacin, cholesterol, and phosphatidylcholine was observed by FTIR analysis 9, 15.

DSC Analysis: DSC is an important analytical method to estimate phase transition temperature (Tc). The temperature of maximal excess heat capacity was defined as the phase transition temperature. DSC analysis was performed with a differential scanning calorimeter (Pyris Diamond TG/DTA, Perkin Elmer, Singapore). Samples of pure ciprofloxacin hydrochloride, soya lecithin, cholesterol were submitted to DSC analysis. Accurately weighed samples were placed in aluminum sample pans. Platinum crucible used with alpha alumina powder was taken as a reference sample. Thermograms were discovered by heating the sample at a constant rate of 20 °C/min. A dry purge of nitrogen gas (20 ml/ min) was used for all runs. Samples were heated from 0 °C to 300 °C. Scans were obtained from the samples. The melting point, peak maxima, and the presence and absence of endotherm peaks were perceived in the DSC graphs 9.

% Entrapment Efficiency (%EE): Drug entrapment efficiency or percentage entrapment efficiency was calculated using the centrifugation method. The liposomal suspensions of 1 ml from different batches were taken and centrifuged at 3000 rpm for 10 min. The sediment obtained after the centrifugation process was suspended again in 100 ml of phosphate buffer pH 7.4, and the absorbance was measured at 276 nm by using Shimadzu UV- 1700 Spectrophotometer, Tokyo, Japan. From the value of absorbance, the amounts present in 1 ml of liposomal suspensions were calculated. The % Entrapment Efficiencies were calculated from the below-mentioned formula 9, 10.

Determination of pH of Liposomal Gel Formulation: The pH of different batches was experimentally evaluated by using a digital pH – meter (Sartorius, GD103, US) 9, 10.

Percentage Yield of Liposomes:  After complete drying down, the drug-loaded liposomes were collected and weighed accurately. The yield of dried liposomes was determined by the following formula 18-20.

In-vitro Drug Release Study of Ciprofloxacin Liposome: The release of ciprofloxacin hydrochloride from the prepared liposomal suspension was determined using the membrane diffusion technique. In this study, the dialysis tubing membrane having a molecular weight of 12000 previously pre-soaked overnight in phosphate buffer (pH 7.4) was used. An accurately weighed amount of ciprofloxacin hydrochloride liposomal suspension was placed in the dialysis tubing membrane, and the end part of the tube was sealed. The sealed parts of the tubes were placed in a conical flask containing 50 ml of phosphate buffer pH 7.4 in an orbital shaker incubator. The incubator was allowed to shake at 100 strokes per minute. The samples were withdrawn from a conical flask at a different time interval (1- 12 h). The dissolution medium was replaced with the same amount of fresh phosphate buffer (pH 7.4) solution. The absorbances of samples were recorded by using Shimadzu UV- 1700 Spectro-photometer for drug content at 276 nm. The cumulative % of drug released was then calculated from the recorded values and plotted against time 20.

Preparation of Ciprofloxacin Loaded Liposomal Gel: Carbopol 940 (0.5% w/w) was used as a gelling agent in order to prepare hydrogels for topical administration. Briefly, the gelling agent was first dispersed in phosphate buffer solution (pH 7.4) and allowed to hydrate overnight at room temperature for swelling the polymer. Then the optimized Liposomes containing ciprofloxacin hydrochloride were directly mixed into the previously prepared carbopol 940 gel by using a magnetic stirrer (2MLH, Remi lab instruments, Mumbai, India). The final product was then neutralized using triethanolamine (0.5%w/w).

In-vitro Skin Permeation Study of Ciprofloxacin Loaded Liposomal Gel: The in-vitro skin permeation study was carried out with a conventional Franz diffusion cell. For the in-vitro drug permeation study, goat skin was taken as a membrane. The skin was stored at 4 °C until the experiment after removal of hair from the skin, the skin was hydrated in normal saline, and the adipose tissue layer was removed from the skin by rubbing with a cotton swab. The goatskin was placed on the diffusion chamber, and the receptor compartment was filled with 10 ml of phosphate buffer solution (pH 7.4), while an adequate quantity of liposomal hydrogel containing ciprofloxacin hydrochloride was applied to the epithelial side of the skin. The temperature in the diffusion chamber was maintained at 37 °C by a thermostatic water bath. The receptor buffer was removed 1, 2, 3, 4, 5, and up to 12 h and immediately replaced by previously aerated fresh phosphate buffer. The samples were analyzed spectrophotometrically for drug content at 276 nm. The experiments were performed in triplicates, and the results were represented as the mean values of three runs. The cumulative amount of ciprofloxacin permeated across the skin was estimated as a function of time 11-13. 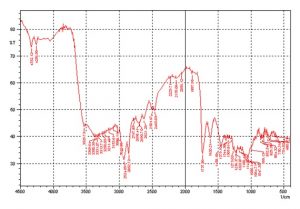 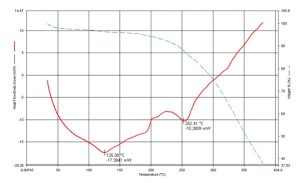 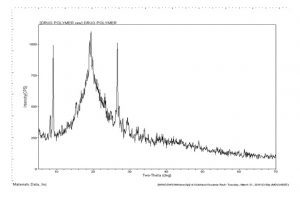 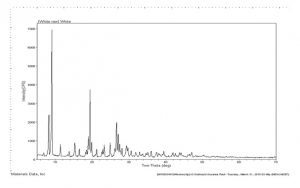 % of Entrapment Efficiency: The percentage entrapment efficiency of ciprofloxacin liposomal vesicles depends on the composition of lipids and the physic-chemical properties of the active drug agent.

The ciprofloxacin liposomes composed of phosphatidylcholine and Cholesterol in a molar ratio of 30:10 (F5) showed the optimum encapsulation efficiency, but further increase in cholesterol concentration decreased the entrapment efficiency.

pH: The pH values of all liposomal suspensions were found to be in the range from 3.13 to 3.69. The pH value of all formulations indicates no skin irritation. So the prepared liposomal hydrogel of ciprofloxacin is compatible with topical administration.

Percentage Yield of Liposomes: The percentage yield for the prepared ciprofloxacin hydrochloride encapsulated liposome was found to be in the range of 77.21–86.75%. The percentage yield of liposome formulations was increased with an increase in the molar ratio of phosphatidylcholine and cholesterol. 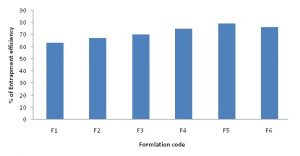 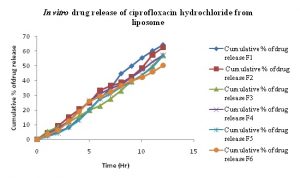 In-vitro Drug Permeation Study: The aim of this experiment was to estimate the permeation rate of liposome formulations as a transdermal dosage form.

The simplest way of topical application may be a direct spread of the ciprofloxacin hydrochloride liposomal hydrogel on the skin surface.

The cumulative amount of ciprofloxacin hydrochloride permeated from prepared liposomes to the receptor compartment is shown in Table 4 and Fig. 7. 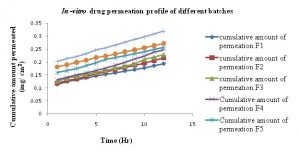 DISCUSSION: In this work, it was found that as the phosphatidylcholine concentration was increased, it resulted in a corresponding increase in the encapsulation efficiency of ciprofloxacin hydrochloride in liposomal vesicles. An increase in total lipid concentration in liposome formulation was also able to control the release of the ciprofloxacin hydrochloride for prolong period of time, which allows the sustained release charac-teristics of the different liposome formulations.

CONCLUSION: In conclusion, sustained delivery of ciprofloxacin hydrochloride can be obtained by the smart liposomal drug delivery system. Phospholipids are being a major component of the drug carrier system and can easily permeate through the tight epithelial junctions of the skin. Also, the desired hydration conditions can improve skin permeation. Hence as the concentration of phosphatidylcholine was increased, it would increase the penetration of ciprofloxacin hydro-chloride. The introduction of liposomal drug delivery system has initiated a new approach in a novel drug delivery system for transdermal administration. Different reports show a promising future of liposomes in making transdermal delivery of various agents to treat some serious skin diseases.

CONFLICTS OF INTEREST: The authors declare that the research was conducted in the absence of any commercial or financial relation-ships that could be construed as a potential conflict of interest.