FORMULATION AND EVALUATION OF CO-CRYSTALS OF POORLY WATER SOLUBLE DRUG

FORMULATION AND EVALUATION OF CO-CRYSTALS OF POORLY WATER SOLUBLE DRUG

INTRODUCTION:  Crystalline forms of active pharmaceutical ingredients, API’s, have traditionally been limited to salts, polymorphs, and solvates (including hydrates). Given the high intrinsic value of API’s and the importance of structure and composition in the context of both intellectual property and bioavailability, it is perhaps surprising that systematic approaches to the development of a new broad class of API, pharmaceutical cocrystals, have only been attempted in recent years.

Co-crystals represent a long known class of compounds, a prototypal example of which is quinhydrone, which was reported at least as early as 1844 and 1893 1.

Co-crystals are solids that are crystalline materials composed of two or more molecules in the same crystal lattice (or) Pharmaceutical co-crystals have, however, been defined as ‘co-crystals that are formed between a molecular or ionic active pharmaceutical ingredient (API) and a benign co-crystal former that is a solid  under ambient conditions 2. Solubility is an important parameter for evaluating the properties of a pharmaceutical cocrystal. Traditional methods for improving solubility of poorly water soluble drugs include salt formation, solid dispersion (emulsification), and particle size reduction (micronisation).

However there are practical limitations with these techniques 4. A pharmaceutical cocrystal is a novel approach to improve the physicochemical properties such as solubility of compounds 1, 3, 4, 5, 6. Darunavir, BCS Class II drug having low solubility and high permeability was selected as the drug taking into consideration the above given parameters. 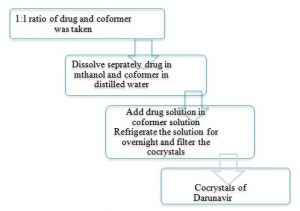 FIG. 1: METHOD OF PREPARATION OF COCRYSTAL

were observed cocrystals by light microscope. Microscopic images are shown in following Fig. 2. 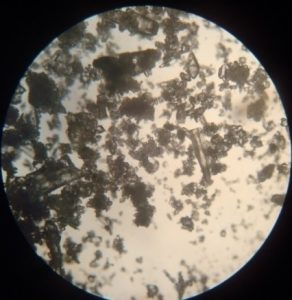 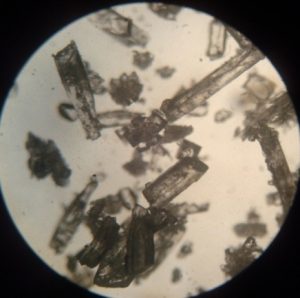 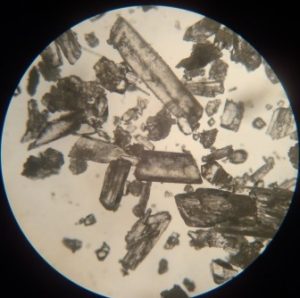 Determination of drug content: Drug contents in cocrystals were shown in Table 3.

The results of drug contents were found satisfactory with 83.91%. This is quite important with respect to formulation development of cocrystals in the suitable form.

Flowability studies: The micromeritic properties such as flowability of cocrystals are shown in Table 4.

a) Fourier transformation infrared spectroscopy (FTIR): The FT-IR spectrum was measured in the solid state as potassium bromide mixture. FTIR spectrum of pure drug, coformer, physical mixtures and cocrystals were shown in Fig. 3-6.

FIG. 5: FT-IR SPECTRUM OF PHYSICAL MIXTURE OF DRUG AND COFORMER

b) Scanning electron microscopy (SEM): SEM of drug, coformer, physical mixture and cocrystals were shown in 7-9. 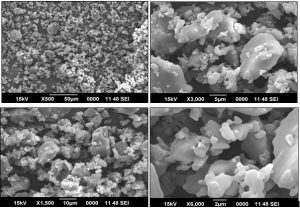 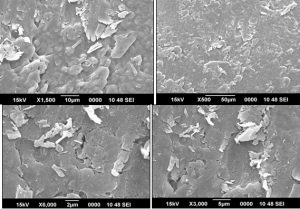 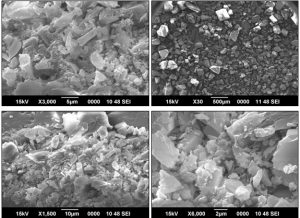 which was subjected to stability studies to determine its physical stability.

The results of drug contents of optimized batch were found satisfactory with 83.91%.

Pure DRV spectrum showed sharp characteristic peaks at 3467, 3366, 1708, 2872, 1242 cm-1. All the above characteristic peaks of drug appeared in the spectra of the physical mixture at the same wave number indicating no modification or interaction between the drug and the coformer. It showed that darunavir was compatible with coformer succinic acid. There is a shift in the C-H (alkyl) functional groups at peak 2965. FT-IR frequency indicate the formation of Hydrogen bond synthons in the Drug and Coformer. Prepared Cocrystal of Darunavir and Succinic acid as coformer were Characterized by FTIR.

Absence of crystalline structure in SEM images of Darunavir indicates its amorphous nature. Whereas, SEM image of coformer shows big crystals and cocrystals showing aggregates of crystals. An examination of the SEMs shows surface morphological properties of drug and crystals confirm that Darunavir particles crystallized from methanol-water system containing succinic acid as coformer. The generation of cocrystalline material was confirmed by recording X-Ray powder diffraction of pure Darunavir, coformer and cocrystals. XRPD is a powerful technique for determining the presence of polymorphs, crystal habbit modification in drug crystals and generation of new crystals form during cocrystallization technique fig., unique XRPD pattern distinguishable from the host (drug) and the guest (coformer). The thermal analysis of drug and cocrystals were studied using differential scanning calorimetry (DSC) shown in Figure and Sharp melting endotherm of darunavir at 76 ºC. Coformer showing melting endotherm at 184 ºC. Physical mixture of 1:1 Darunavir and succinic acid showing intact endothermic peak at 80 ºC  and 184 ºC. Thermogram of cocrystals shows melting endotherm of darunavir  at 76 ºC and succinic acid at 184 ºC which may be because of adsorbed drug and coformer on cocrystals showing melting endotherm peak at 74 ºC. The cocrystal described here show’s melting temperature reduced from that of Drug, suggesting that the cohesive energy of cocrystal is decreased from that of the pure Drug.

The release data obtained for formulations C1, C2, C3 and C4 are tabulated in table no. and Figure which shows the plot of cumulative percent drug released as a function of time for different formulations. The in-vitro release of all the four batches of cocrystals showed an immediate release with an initial burst effect. In the first 10 mins, drug release was 6.43%, 2.54%, 2.65 % and 1.78 % for batch C1, C2, C3 and C4 respectively. The in vitro dissolution performance of Cocrystals, which was significantly higher in C1 batch than the plain drug i.e 89.65%. Optimized formulation (C1) was filled into vials as the final optimized batch which was subjected to stability studies to determine its physical stability. It was found that there is no significant changes in bulk density, tapped density, angle of repose, drug content and drug release in the duration of four months.

CONCLUSION: In the present work prepared darunavir cocrystals exhibited excellent physicochemical properties (solubility and dissolution) and micrometric properties when compared with pure drug. From the conducted study, we can conclude that cocrystals with succinic acid prepared by the use of cocrystallization technique showed an improvement in the solubility, dissolution rate and flowability and stability as compared with pure drug.

Solid state characterization of drug and cocrystals showed satisfactory results such as FTIR proves compatibility; SEM showed enlarged size with signs of porosity, while DSC showed thermal evaluation. The altered size and shape of cocrystals indicated modified crystal habit which could be responsible for dramatic improvement in flowability, solubility and dissolution properties of darunavir from the cocrystals. On the basis of these results, itcould be concluded that, cocrystals of darunavir with succinic acid could be possible and served as an alternative and effective approach for improvement in physicochemical and micromeretic properties of darunavir. By virtue of improved stability, immediate release or conventional dosage form can be prepared by using such cocrystals which could be the best alternative for the prompt delivery of darunavir as compared to orally administered   products available in market.

ACKNOWLEDGEMENTS: My heartfelt thanks to principal sir Dr. D. R. Chaple sir for availing facilities to college. I am extremely grateful to Dr. P. P. Ige sir, Professor, R.C. Patel College of Pharmacy, Shirpur for allowing me to persue my project in their college & for his guidance and support.  My sincere thanks to Dr. Akhilesh Dixit sir, Associate Vice President (R&D), Mylan, Hyderabad, for providing me gift sample of Darunavir.