ABSTRACT: The objective of the present study was to formulate and evaluate microspheres of Glipizide using guar gum and HPMC K4M as polymers for colon-specific delivery for better treatment of Type 2 diabetes. The glipizide microspheres were prepared by ionotropic gelation method by the use of various cross-linking agents. The microspheres were then studied for physical appearance, particle size, surface morphology, drug-polymer compatibility, and drug entrapment efficiency. The in-vitro drug release profile was studied in three different buffer medium using USP type I apparatus. Further, kinetic modeling was employed to find out the release mechanism. Glipizide microspheres showed high entrapment efficiency (89.80%) and the microspheres were free-flowing, non aggregated, and almost spherical between 500-700 μm in diameter. The FTIR spectrum showed that there is no interaction between the polymers and drug. The in-vitro release study found to be affected by using various cross-linking agents. The microspheres with barium chloride as cross-linking agents showing a small amount of drug release in acidic pH but show maximum drug release at the end of 12 h. It was found that the % cumulative release in microspheres encapsulated with guar gum was maximum for F2 (64.29%) and minimum for F6 (42.85%). The rate of drug release follows the Korsmeyer-Peppas model and zero-order kinetics. The colon targeted microsphere of Glipizide showed no change either in physical appearance, drug entrapment efficiency and dissolution pattern after performing stability study for 6 months.  The study reveals that glipizide loaded microspheres can be used effectively for colon targeting.

Targeted delivery of drugs to the colon has attracted much interest recently for local treatment of a variety of colonic diseases such as irritable bowel syndrome (IBS), colorectal cancer, and inflammatory bowel diseases (IBD), which includes both ulcerative colitis and Chron's disease.

Apart from these local treatments, the colon is used for the systemic absorption of proteins and peptides and also for those drugs where a delay in drug absorption is required from a therapeutic point of view. Specific targeting of drugs to the colon is recognized to have several therapeutic advantages. Drugs, which are destroyed by the stomach acid and / or metabolized by pancreatic enzymes, are slightly affected in the colon, and sustained colonic release of drugs can be useful in the treatment of nocturnal asthma, angina, and arthritis. Treatment of colonic diseases such as ulcerative colitis, colorectal cancer, and Crohn’s disease is more effective with direct delivery of drugs to the affected area. Likewise, colonic delivery of vermicides and colonic diagnostic agents require smaller doses 1. Glipizide is an anti-diabetic medication of the sulfonylurea class used to treat Type 2 diabetes. It is used together with a diabetic diet. It is active at very low doses, a characteristic feature of second-generation sulfonylureas.

It is practically insoluble in water and acid solution but as per the Biopharmaceutical Classification System (BCS), it is highly permeable. Glipizide having a short biological half-life (2-5h) requiring it to be administered in 2 to 3 doses of 2.5 to 10 mg per day. SR formulations that would maintain plasma levels of drug for 8 to 12 h might be sufficient for once a day dosing for Glipizide. Sustain release products are needed for Glipizide to prolong its duration of action and to improve patient compliance 2.

The objective of the study is to formulate and evaluate colonic microspheres of Glipizide using guar gum and HPMC K4M polymers. By directly targeting the drug to the colon, the maximum concentration of drug reaches and increases the residence time of the drug in the colon with improved patient compliance, lesser side effects, and an ideal drug delivery system. Different batches of Glipizide microspheres were prepared using a different cross-linking agent. The microspheres were then studied for physical appearance, entrapment efficiency, drug-polymer compatibility, surface morphology, in-vitro drug release studies.

Materials: Glipizide, guar gum and HPMC K4M were obtained from Yarrow chem. Products, Dombivali (E), Mumbai, sodium alginate from Chemvin Industries, Thrissur. All other chemicals and reagents used in this study were of analytical grade.

Preparation of Calibration Curve of Glipizide: 3 The stock solution was diluted accordingly to get a concentration of 100 µg/ml using phosphate buffer pH 7.4, 6.8, and 0.1N HCl (Solution B). From this solution 0.5, 1, 1.5, 2 and 2.5 ml solution were transferred into 10 ml volumetric flask to get 5, 10, 15, 20 and 25 μg/ml solutions respectively. The working standard solutions of glipizide were scanned in the UV region, and the absorbances were observed against phosphate buffer (pH 7.4, 6.8) and 0.1N HCl solution as blank at 276 nm. Finally, the calibration curve was plotted with a concentration on X-axis and respective absorbances on Y-axis.

Fourier Transform Infra-Red Spectroscopy (FTIR): 4 Preformulation studies regarding the drug-polymer interaction is very important in the selection of appropriate polymers. So the integrity and compatibility of pure drug glipizide with the polymers were studied using Fourier Transformed Infrared Spectroscopy (FTIR). The FTIR spectra of pure drug, polymers, and the physical mixture of drug and polymers were taken. The spectra are run between 4000 – 400 cm-1.

Preparation of Colon Targeted Microspheres of Glipizide: Required quantity of Guar gum and HPMC K4M individually were dissolved in distilled water (I). The same quantity of sodium alginate was dissolved in distilled water and 10mg of drug dispersed into this solution (II). I and II solution were mixed and dropped into a different cross-linking agent solution with 21 gauze needle. The microspheres allowed hardening in the solution for 15 min. Then microspheres were filtered and dried primarily at room temperature and after it, in a hot air oven at 35 °C for about 30 min. Microspheres were then stored in glass bottles, capped tightly. After that, microspheres were weight equivalent to the dose of the drug and filled manually into hard gelatin capsule shells 2.

Particle Size and Surface Morphology: Particle size was determined by optical microscopy. The most widely used procedures to visualize microparticles by using scanning electron microscopy (SEM). Morphological examination of the surface and internal structure of the dried microspheres was performed by using a Scanning electron microscope (model-JEOL JSM-6390 England) using platinum sputter technique. The working distance is 50 micrometer. Photographs were taken with 100 × magnifications 2. 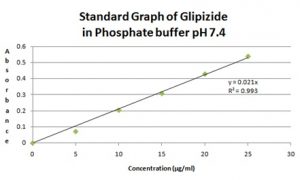 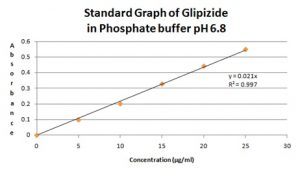 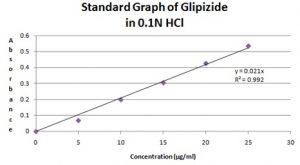 Stability Studies: The principles of accelerated stability studies are adopted. ICH specifies the length of study and storage conditions. Best formulation was stored at a different temperature at 25ºC ± 2ºC at 65% ± 5% RH for 6 months and 40ºC ± 2ºC at 75% ± 5% RH for 6 months 9.Drug Release Kinetics of Best Formulation: To examine the drug release kinetics and mechanism, the cumulative drug release data were fitted to models representing zero order, first order, Higuchi’s model and Korsmeyer-Peppas model 8.

The individual spectra are compared with the physical mixture of drug and polymer, and no major differences were found in the absorption position of the peaks. Hence there are no incompatibility problems with the drug and polymers. 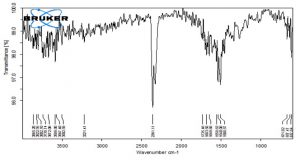 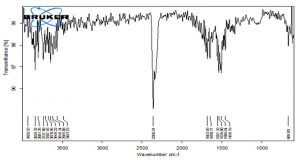 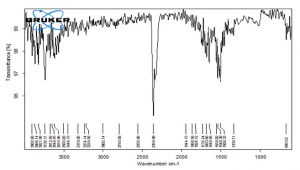 In-vitro Drug Release Study: It was seen from the observation data that the cumulative percentage release from all the drug-loaded batches of microspheres fell within the range of 42.85% to 64.29% in 12 h study, and it was found that the % cumulative release in microspheres encapsulated with guar gum was maximum for F2 (64.29%) and minimum for F6 (42.85%). The results of in-vitro release study indicated that the amount of drug release decreased significantly in the microspheres cross-linked with zinc sulfate. 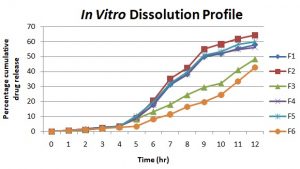 It was found that the release of drug from all drug-loaded microspheres was found to follow a slow or sustained manner for a period of 12 h. Also, the percentage cumulative drug release in 0.1N HCl is very less (at first 2 h), which indicate that polymers will prevent the release of drug in the stomach, and proper drug release is occur only when the drug reaches in the colonic region. This further confirms the targeted delivery of the drug to the colon.

Drug Release Kinetics: The data obtained from the in-vitro drug release studies of formulation F2 was fitted into the various kinetic models, and it was found that the drug release seems to follow zero-order kinetics as it is evidenced by correlation coefficient (R2=0.944) and Korsmeyer-Peppas was found with regression coefficient (R2=0.946). Therefore, it was ascertained that the drug permeation from the microsphere of optimized formulation F2 should follow zero-order kinetics and Korsmeyer-Peppas equation explains the diffusion-controlled release mechanism. In this study the n value of F2 was found to be between 0.85-1.0 (0.946) then it shows non-fickian case II transport.

CONCLUSION: Formulation F2 was selected as the optimized formulation which has a particle size of 583.44 ± 0.28 μm with drug entrapment efficiency of 89.80 ± 0.167% and showed in vitro drug release of 64.28% at the end of 12 h. The rate of drug release follows the Korsmeyer-Peppas model and zero-order case II transport mechanism. The selected formulation was evaluated for its stability and was stable at room temperature and accelerated temperature over six months.

The result of this investigation reveals that the ionotropic gelation method can be successfully employed to fabricate Glipizide loaded microspheres. The entrapment efficiency and the in-vitro drug release were found to be greatly influenced by the cross-linking agent.

It is concluded that Glipizide microspheres of guar gum cross-linked with barium chloride is free-flowing, almost spherical and maximum entrapment efficiency are prepared and analyzed for in-vitro drug release and found to be maximum in colonic simulated conditions.

So, our objective of delivering Glipizide microspheres to the colon for type 2 diabetes to enhance its duration of action, decrease frequent dosing, and to minimize the side effects were achieved through optimized microspheres parameters.

ACKNOWLEDGEMENT: The authors are thankful to authorities of Crescent College of Pharmaceutical Sciences, Payangadi, Kannur for providing all the necessary facilities.