INTRODUCTION:Conventional drug delivery systems have little control over the drug release and so effective concentration at the target site can not be achieved. This kind of dosing pattern may result in unpredictable plasma concentrations.

These pore-forming agents are leached when contacted with an aqueous medium, and the pores are created on the surface to allow drug release. Plasticizer can also be used as pore forming agent. Plasticizer has been used to modify not only the mechanical properties but also the thermal property, water absorption behavior, and adhesive property of polymeric films 5.

All of these properties affect the strength of coating films and the integrity of final products, which further affect drug release performance. Many compounds can be acted as a function of plasticizer including poly(ethylene glycol) 6, propylene glycol 7, sorbitol 8, urea 9, oil 10, citrate 11, adipate 12, and phthalate 13, etc.

The release of drug is dominated by thickness of coating films, the level of water-soluble components, the solubility of drug, and the osmotic pressure difference. The advantage of blending of pore-forming agent avoids using high technical laser beam to drill an orifice for drug release, in additional, it is easily fabricated via traditional film coating technique 14.

Candidate drugs for osmotic drug delivery have water solubilities of 50-300 mg/ml. High soluble drugs would show a high release rate that would be zero order release for very small percentage of initial drug load. Thus intrinsic water solubility of many drugs might preclude them from incorporation into osmotic drug delivery system. By modulating the solubility of drug within core, effective drug release can be obtained for even poor candidate drugs for osmotic drug delivery. This approach can be used for conversion of first order profile into zero order profile without altering the chemical structure15.

Preparation of Core Tablet: Metoprolol succinate, lactose monohydrate, Hypromellose and sodium chloride were sifted through 30# sieve and mixed for 5 min. Dry mix of metoprolol succinate and other excipients was granulated with purified water. Granulated mass was dried at 65ºC in tray dryer till LOD reaches between 1-2%. Dried granules were sized through 0.8 mm sieve and lubricated with magnesium stearate for 5 min. Tablets were compressed with 7.93 mm round concave punches using 16-station rotary tablet press (Cadmach Machinery, Ahmedabad). Tablets were compressed at an average weight of 200 mg and hardness of tablets was kept 5.0-6.0 Kg/cm2.

Coating of Tablets: Core tablets were coated with semipermeable membrane of 5% solution of cellulose acetate in methelyne chloride/methanol (80:20) mixture. PEG 400 was used as a plasticizer and PVP was used as pore former in semipermeable coating. Coating composition is given table No: 1. Coating was carried out in perforated coating pan (Gans coater, Ganson Limited, Mumbai, India). Core tablets were sprayed with coating solution at following parameters: Pan rpm: 2-8, Inlet temperature: 40-45oC, Atomization pressure: 1.5 Kg/cm2, Pump rpm: 2-6. Coating was continued till desired weight gain on core tablets was achieved. Coated tablets were dried at 50oC for 24 hr to remove residual solvents.

Evaluation of Developed Formulations: Dissolution of coated formulation (n=6) was carried out in pH 6.8 phosphate buffer, 500 ml by using USP dissolution apparatus-II (Electrolab, India) at 50 rpm. Temperature of dissolution media was kept at 37±0.5oC. The samples were withdrawn (10ml) at different time intervals and replaced with 10 ml of fresh media. Samples were withdrawn at 1, 2, 4, 8, 12, 16, 20 and 24 hr for measurement of drug release. Samples were analyzed using UV spectrometer at 280nm.

During operation, the core compartment imbibes aqueous fluids from the surrounding environment across the membrane. The dissolved drug is released through the pores created after leaching of water soluble additive in the membrane. Cellulose acetate was used as water-insoluble polymer. PVP was used as water-soluble plasticizer and pore former. Metoprolol succinate is having high solubility that precludes it from incorporation in osmotic dosage forms. Due to its high solubility, it gives zero order drug release for very small period of time. 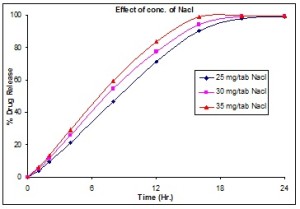 b)      Effect of Release Retardant Concentration: Highly water-soluble drugs would demonstrate a high release rate that would be zero-order for a small percentage of the initial drug load. Thus, the intrinsic water solubility of many drugs might preclude them from incorporation into an osmotic pump. However, it is possible to modulate the solubility of drugs within the core and thus extend this technology for delivery of drugs, which otherwise may be poor candidates for osmotic delivery 16-19. 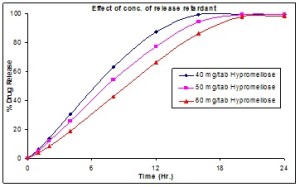 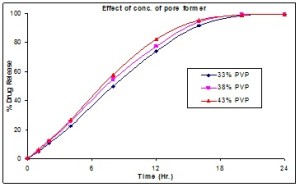 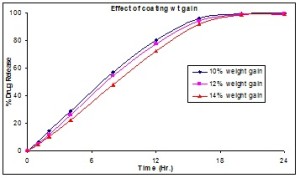 To study the effect of agitational intensity of the release media, release studies of the optimized formulation was carried out in USP dissolution apparatus type II at varying rotational speed (50, 100, and 150 rpm) in 500 ml of pH 6.8 phosphate buffer. It is clearly evident from fig. 6, that the release of metoprolol is independent of the agitation intensity.

It was concluded that osmotic pumping is the major mechanism governing drug release from developed formulations 20-23. 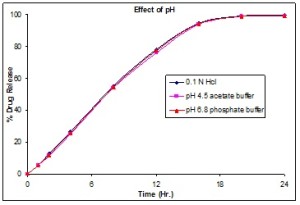 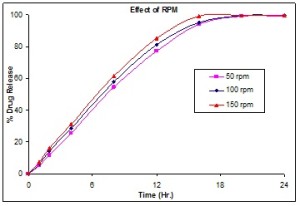 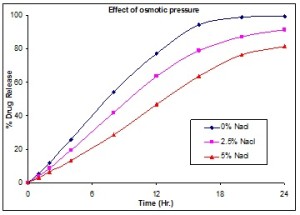 CONCLUSION: Extended release formulations of metoprolol succinate were developed based on osmotic technology. The effect of different formulation variables was studied to optimize release profile. Solubility of active pharmaceutical ingredient is the key factor in development of osmotic dosage form. It is difficult to formulate the osmotic tablet of drugs having very high solubility. Solubility of drug is required to reduce to get desired profile. Level of release retardant (hypromellose) affected the release from the developed formulations. As the concentration of hypromellose increased, release rate was decreased.

Effect of sodium chloride concentration, pore former concentration and weight gain of tablets on dissolution was also checked. Concentration of sodium chloride, pore former increases, dissolution rate of metoprolol succinate also increases. But increase in the tablet weight gain is inversely proportional to the dissolution release rate. The release from the optimized formulations was independent of pH and agitation intensity of the release media, assuring the release from the tablet was independent of pH and hydrodynamic conditions of the body.