INTRODUCTION: For many decades, conventional dosage forms, which are of prompt releasing nature, are used for the treatment of acute and chronic diseases. The conventional dosage forms provide no control over the release of the drug. Recently, several technical advancements have been made. These have resulted in the development of new techniques in drug delivery.

These techniques are capable of controlling the rate of drug delivery, sustaining the duration of therapeutic activity and/or targeting the delivery of the drug to tissue.

It is advantageous to deliver some drugs with a short half-life and which are to be given frequently for chronic ailments in the form of controlled release formulations. The majority of existing oral controlled release systems are matrix-based, and their principle drug release mechanism is based on drug diffusion through the matrix system. The diffusion is altered by the pH of the medium, the presence of food, hydrodynamic conditions, and the body’s other physiological factors, all of which can cause difficulty in controlling the drug release rate and result in poor in-vivo­ – in-vitro correlations (IVIVC) 1, 2.

The objective of the work is to release the drug from these osmotic systems independent of the physiological factors of the gastrointestinal tract (pH) and to get zero-order drug release.

Development of Analytical Method (UV Spectrophotometry): 3 UV spectroscopic method is chosen for the analysis of Verapamil HCl. The wavelength of 278 nm was selected for further study.

Optimization of Sodium Chloride in Core Tablet: 4 Incorporating sodium chloride can modulate the release of drug within the system to control drug release. For the optimization of sodium chloride in the core tablet, preliminary formulations were prepared by incorporating sodium chloride into the core tablet in  10, 15, 20, 25, 30, 40 mg. Increments. The tablets were prepared by direct compression technique. The ingredients were weighed accurately as per the formula given in Table 1. The ingredients were kneaded in the mortar and pestle for 15-20 min.

The core tablets were compressed at an average weight of 300 mg using 10 mm concave punches and 6-7 kg/cm2 hardness in 8 stations rotary tablet machine.

Dip Coating: 5 Tablets were coated by the dip-coating process. 4% cellulose acetate solution was used for coating. The coating solution was prepared as per the formula given in Table 2. The coating of the core tablet was done manually by holding each tablet with the help of forceps. The coated tablets were dried by keeping them at room temperature for 24 h. Weight gain maintained at 4% w/w. The thickness of the coated tablets measured by using a digital Vernier caliper. The tablets were evaluated by studying the release study for 6 h, in a 900 ml dissolution medium using USP Apparatus 2 (Paddle) with 50 rpm.

The tablets were then coated with a coating composition, which was constant for the formulations Table 2 to get a weight gain of 3, 4, 5, 6, 7, and 8% w/w Table 3. The tablets were evaluated by studying the consistency of coat for 8hr, in 900 ml dissolution medium using USP Apparatus 2 (Paddle) with 50 rpm. The consistency of the coat at various % weight gains was summarized in Table 3.

TABLE 3: PRELIMINARY FORMULATIONS FOR EVALUATION OF CONSISTENCY OF COAT

The Optimized Formulation was then Further Evaluated for Effect of Various Concentrations of Pore Forming Agent sorbitol: 9 In order to study the effect of various concentration of pore former on in-vitro drug release, the tablets were coated with pore former 15% w/w, 20% w/w, 25% w/w and the without pore former, the % weight gain of tablets were kept constant. The weight gain by the tablets was 5 ± 0.5%. Formulations were done as per the formula given in Table 4.

TABLE 4: FORMULATIONS FOR EVALUATION OF EFFECT OF PORE FORMER

Kinetics of Drug Release: 10, 11, 20 The dissolution profile of all the formulations were fitted to zero-order kinetics, first-order kinetics, Higuchi, Hixson-Crowell, Korsmeyer and Peppas to ascertain the kinetic modeling of drug release by using a PCP Disso Version 2.08 software, and the model with the higher correlation coefficient was considered to be the best model.

Effect of pH on Drug Release: 12, 13 In-vitro dissolution studies were performed using USP Apparatus 2 (Paddle) in different release media (phosphate buffer pH 4, 6.8) maintained at 37 °C ± 0.5 °C and 50 rpm. The optimized formulation (F3) was selected for the study of the effect of pH on drug release. The responses were noted in triplicate.

Surface Morphology Study: 14 To evaluate the surface morphology of the coating membrane, surfaces of the optimized formulation (F3) were examined using scanning electron microscopy both before and after dissolution (XL30 ESEM TMP+EDAX, Philips). Membranes were dried at 45 ºC for 12 h and stored between in a desiccator until examination.

Stability Study: 15, 16 The optimized formulation (F3), which gave desired zero-order release for an extended period of time was selected, packed in aluminum foil and subjected to stability studies as per ICH guidelines, 40 ± 2 °C and 75 ± 5% RH (Thermolab). Samples were withdrawn at time intervals of 1, 2, and 3 months. The samples were evaluated for appearance, assay and in-vitro release profile.

Precompression Studies: Many different properties have been employed to assess flowability, of these, angle of repose is the most relevant. The bulk density was found to be between 0.665 gm/cm3. The value indicates a good packing capacity of powder. The tapped density of powder was found to be 0.759 gm/cm3. The bulk density and tapped density was used to calculate the percent compressibility of the powder.

Evaluation of Core Tablet: All formulated core tablets were shiny white with a smooth surface, circular curved faced with good texture. The thickness of the core tablet was found to be 5 mm, due to constant tablet press setting irrespective of weight variation.

TABLE 6: EVALUATION OF CONSISTENCY OF COAT

Evaluation of Effect Different Concentration of Pore Former: Osmotic tablets were subjected to in-vitro drug release studies in the buffer of pH 7.5 for 8 hr, the dissolution profiles of all formulations were summarized in Table 7. Hence, it was evident that the increase in the concentration of pore former the drug release from the system was found to be increased.

FIG. 2: EFFECT OF DIFFERENT CONCENTRATIONS OF SORBITOL ON DRUG RELEASE FROM CPOP

Kinetics of Drug Release: In the present study, the dissolution was analyzed by PCP Disso Version 2.08 software to study the kinetics of the drug release mechanism. The results showed that some of the formulations followed zero-order dissolution mode, and some followed the Peppas model. The R2 value of all dissolution models was shown in Table 8. The value of n i.e. release exponent was found in the range of 0.81 to 0.96, which shoes release of drug from the system by anomalous transport.

*All reading taken in trip

FIG. 3: EFFECT OF DIFFERENT PH ON RELEASE OF DRUG

Surface Morphology Study: To investigate the change in the membrane structure, surface of coated tablets (both before and after dissolution studies) was studied using Scanning Electron microscopy microphotographs showed in Fig. 4 (a, b, c) shows membrane structure before dissolution, initially, the surface of coated tablets was smooth before coming into contact with aqueous environment and coats appeared to be free of pores. A microporous structure of the membrane after dissolution was observed from Fig. 4b, which shows SEM of the membrane after dissolution. This significant porosity has resulted due to leaching of water-soluble additive i.e., sorbitol during dissolution through which drug release takes place. Fig. 4c shows the pore size.

Stability Study: The optimized formulation F3 was subjected to the accelerated stability study at 40 ± 2 °C and 75 ± 5% RH for 3 months as per ICH guidelines. Drug release profile and visual appearance like dimension, color change, thickness were monitored for 3 months. The results of the accelerated stability studies revealed no significant change in the parameters. From Table 10, the considerable drug loss was not fond for 3 months. Therefore, the formulation of F3 is considered to be stable.

Comparative Study of CPOP and EOP: From the dissolution profile of EOP system Table 11, it was found that formulation F8 having an orifice size 0.5 mm delivered drug up to 7 h and formulation F9 (0.8 mm orifice size) for 6 h. 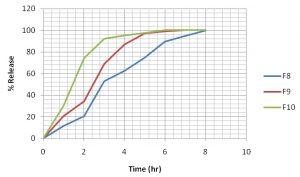 The study revealed that CPOP is superior to conventional EOP, because CPOP delivered Verapamil HCl for 8 h and also easier and cost-effective to formulate.

Comparative Study of CPOP and Marketed Sustained Release Tablet: From dissolution studies Table 12, it was revealed that the marketed Verapamil HCl SR formulation does not follow zero-order drug release pattern as that of CPOP. 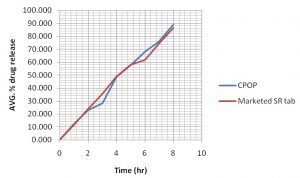 CONCLUSION: The investigation carried out so far has encouraged for drawing the following conclusions:

ACKNOWLEDGEMENT: We thank all the industries which supplied drug and excipients gift samples. We also are grateful to Pad. Dr. D. Y. Patil College of Pharmacy, Akurdi, Pune, where we worked.