The aim of the present study is to formulate and evaluate controlled release formulation of lornoxicam based on osmotic technology. Lornoxicam, a potent non-steroidal anti-inflammatory drug (NSAID) with shorter half life, makes the development of sustained release (SR) dosage forms extremely advantageous. However, due to its weak acidic nature, its release from SR delivery system is limited to the lower GIT which consequently leads to a delayed onset of its analgesic action. Basic pH modifier tromethamine and wicking agent SLS were incorporated into the core tablet to create basic environmental pH inside the tablets, which provide complete drug release that starts in the stomach to rapidly alleviate the painful symptoms and continue in the intestine to maintain protracted analgesic effect. The effect of different formulation variables namely level of osmogen (mannitol) in the core tablet and level of pore former (sorbitol) in the coating membrane on in-vitro release was studied. Lornoxicam release from controlled porosity osmotic pump was directly proportional to the pore former (sorbitol) and level of osmogen (mannitol). Drug release from the developed formulations was independent of pH and agitational intensity and was dependent on osmotic pressure of the release media. Results of SEM studies showed the formation of pores in the membrane from where the drug release occurred. The optimized formulation was found to release the drug in zero order and found to be stable upon stability studies.

INTRODUCTION:Oral Controlled drug delivery is the one which delivers the drug at a predetermined rate, locally or systemically, for a specified period of time. Oral route has been the commonly adopted and most convenient route for the drug delivery. By considering the conventional dosage form of a drug and the drug profile data, such as dose, absorption rate constant, elimination rate constant, metabolic properties, drug properties and the quantity of drug needed, one can determine the desired release rate of the drug from controlled release dosage form. A variety of approaches and materials has been proposed, which could effectively be used in designing and construction of systems with potential to provide predictable, precise and reproducible pattern of controlled release or even site specific drug delivery 1.

Osmotically controlled oral drug delivery system is the one which utilizes osmotic pressure for controlled delivery of active agent. Drug delivery from these systems, to a large extent, is independent of the physiological factors of the gastrointestinal tract. These systems can be utilized for systemic as well as targeted delivery of drugs. The release of drug from osmotic systems is governed by various formulation factors such as solubility and osmotic pressure of the core component, size of the delivery orifice, and nature of the rate-controlling membrane 2. By optimizing formulation and processing factors, it is possible to develop osmotic systems to deliver drugs of diverse nature at a pre-programmed rate.

Lornoxicam is an extremely potent member of the oxicam group of NSAIDs that is widely used in management of pain associated with rheumatoid and osteoarthritis. It shows better GI tolerability compared to other NSAIDs which is extremely advantageous in terms of fewer side effects but due to its rapid elimination rate, repeated daily administration of lornoxicam is required to achieve long lasting and constant pain relief. Added to that, lornoxicam shows a distinct pH-dependent solubility characterized by poor solubility in low pH conditions present in the stomach which consequently leads to delay in its analgesic effect 3.

Thus, there is a strong clinical need and market potential for a dosage form that will deliver lornoxicam in a controlled manner to a patient needing this therapy, thereby resulting in a better patient compliance. The present study was aimed towards the development of controlled release formulations of lornoxicam based on osmotic technology. Different formulation variables were studied and optimized to achieve the desired release profile. The manufacturing procedure was standardized and the stability of the formulation was evaluated after 3 months of storage at accelerated stability conditions.

Chemicals: Lornoxicam was obtained as a gift sample from SKN Organics Private Limited, Pondicherry. Tromethamine and Sorbitol were purchased from S.D. Fine Chemicals, Mumbai. All other ingredients were obtained from ATOZ Pharmaceuticals, Chennai.

Micromeritic Properties: The drug and blend of drug with excipients was evaluated for bulk density, tapped density, compressibility index, Hausner’s ratio and angle of repose5.

The lubricated granules were compressed into tablets using 8.0mm standard concave punches on a double rotary tablet machine. The composition of core tablets is listed in Table 1.

Drug Content: Ten tablets were weighed and ground. The powder equivalent to 8mg of drug was taken, dissolved in methanol and phosphate buffer pH 6.8 in the ratio of 1:1 and suitably diluted. The absorbance of the resulting solution was measured at 376nm and the amount of lornoxicam was calculated 7.

Drug Content Uniformity: Ten tablets were randomly selected and tested for their drug content. Each tablet was powdered, 50 ml of methanol was added, shaken for 30 minutes and 6.8 pH phosphate buffer was added to produce 100 ml. It was then centrifuged. 10ml of the supernatant liquid was taken and diluted to 100 ml with 6.8 pH phosphate buffer. The absorbance of resulting solution was measured at the maximum at about 376 nm and the content of lornoxicam was calculated and compared with the label claim 8.

In-vitro release study of the Tablets: Two step-dissolution conditions were carried out in a USP Type II (paddle) dissolution apparatus to simulate the physiological conditions of GIT: 2 hours in 900 ml of simulated gastric fluid (SGF, pH 1.2) and  remaining  22 hours in 900 ml of simulated intestinal fluid (SIF, pH 6.8). The stirring rate was 100 rpm and the temperature was maintained at 37±0.5°C. Aliquots of dissolution medium were withdrawn at predetermined time intervals and the same volume of medium was replenished to maintain the consistent volume 9.

Effect of change in agitation speed on Drug Release: In order to study the effect of agitational intensity on the optimized formulation, release study was also performed in dissolution apparatus at various rotational speeds of 50, 100 and 150 rpm using two step-dissolution conditions (2 hours in 900 ml of SGF pH 1.2, and remaining 22 hours in 900 ml of SIF pH 6.8) in a USP TypeII dissolution apparatus. The temperature was maintained at 37±0.5°C. The release was studied at predetermined time intervals 10.

Effect of pH on Drug Release: In order to study the effect of pH of release medium in the drug release of optimized formulation, the in vitro release studies can be carried out in buffers of different pH, like pH 1.2 buffer, pH 4.5 acetate buffer, and pH 6.8 phosphate buffer in USP type II dissolution apparatus. The temperature was maintained at 37±0.5°C. The release was studied at predetermined time intervals 11.

Effect of Osmotic Pressure: To confirm the major mechanism of drug release, release study of the optimized formulation was conducted in release media of different osmotic pressure. To increase the osmotic pressure of the release media (pre-equilibrated to 37°C ±1°C); mannitol (Osmotically effective solute) was added to produce 1.5 atm, 3 atm and 4.5 atm respectively. The release was studied at pre determined time intervals 12.

Scanning Electron Microscopy: Coating membranes of formulation obtained before and after complete dissolution of core contents were examined for their porous morphology by scanning electron microscope. Membranes were dried at 45oC for 12 hours and stored between sheets of wax paper in a dessicator until examination. The membrane was coated under an argon atmosphere with gold-palladium, and observed with a scanning electron microscope 12.

Release Kinetics of the Optimized Formulation: The in-vitro release data of the optimized batch was fitted to various kinetic models (Zero-order, First-order, Higuchi, Hixson - Crowell and Korsmeyer-Peppas models). The best fit was found out to describe the kinetics of drug release 12, 13.

Stability Studies: The optimized batch was subjected to the stability study at accelerated condition of 40oC / 75% RH for a period of 3 months. Optimized formulation was packed in blister and stored in stability chambers maintained at 40°C and 75% RH for three months. After every month tablet samples were analyzed for physical appearance, drug content and in-vitro release 14.

Compatibility study: From the FT-IR study the drug was found to be compatible with all the excipients.

Physical Evaluation and Drug Content: The lornoxicam osmotic tablets were uniform in weight (0.275 to 0.278g) and the thickness (3.54 to 3.58mm) and diameter (8.912 to 8.966mm) of the tablets were uniform. The hardness of coated tablets was found to be between 5.2 and 5.8 kg/cm2, while the friability of osmotic tablets ranged between 0.10% and 0.71%. The tablets have enough hardness to withstand stress during transport and handling. The drug content in various formulations varied between 95.61% and 100.91% w/w (Table 4). 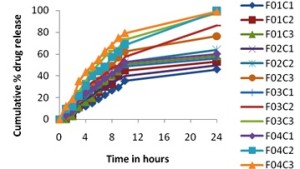 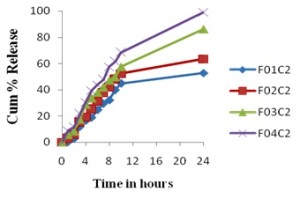 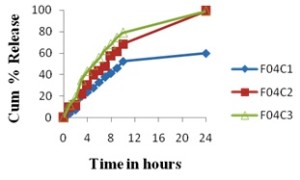 Increase in  the level of pore former increases the membrane porosity  due to more number of pores formed in the membrane, resulting in faster drug release (Figure 3). 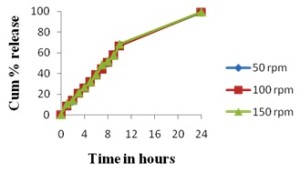 FIGURE 4: EFFECT OF SPEED OF ROTATION ON DRUG RELEASE

The speed of rotation doesn’t have much effect on drug release. Therefore the motility of gastrointestinal tract might scarcely affect the drug release. (Figure 4) 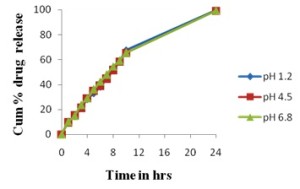 The results shows that the pH of release medium does not have significant effect on drug release. Thus the fluid in different parts of gastrointestinal tract will scarcely affect the drug release (Figure 5). 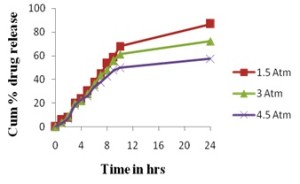 Membrane morphology of Porous Osmotic Tablets: Membranes obtained before dissolution clearly showed non porous region (Figure 7a, 8a). After 24 hours of dissolution the membrane showed pores formed owing to the dissoution of sorbitol from the membrane, (Figure 7b, 8b). The formulation with C2 coating containing 10% sorbitol produced less pores (Figure 7b) compared to formulation C3 coating  containing 20% sorbitol (Figure 8b). 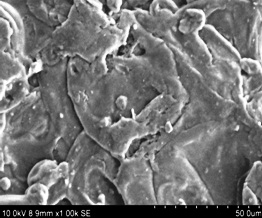 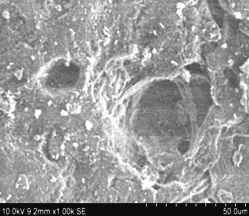 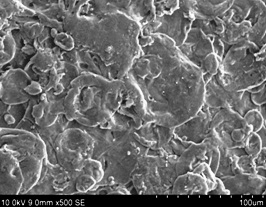 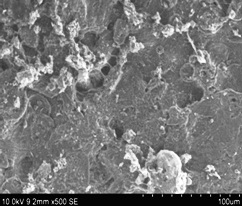 Release Kinetics of the Optimized Formulation: The R2 values for various release models are 0.9443 for zero order, 0.8639 for first order, 0.9714 for Higuchi, 0.8126 for Korsemeyer Peppas and 0.9815 for Hixson Crowell kinetics. The drug release follows zero order kinetics and the mechanism followed is Hixson Crowell (Figure 9 and 10). 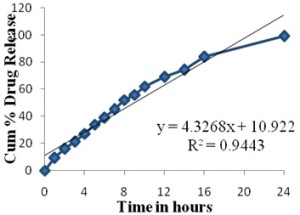 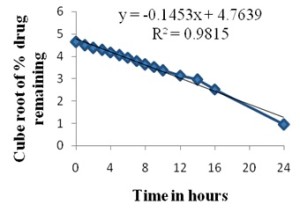 Stability Studies: The osmotic tablets (F04C2) were stored at 40oC/75% RH for 3 months, there was no change either in physical appearance or in drug content. The dissolution study was conducted in the simulated physiological environment of stomach (pH 1.2), and intestine (pH 6.8), not much difference was observed in the cumulative percentage release of lornoxicam from F04C2. Hence the formulation was found to be stable.

CONCLUSION: Lornoxicam controlled porosity osmotic tablet was developed.  Of the several formulations investigated, the formulation (F04C2) containing mannitol 60% in the core tablet and 10% of sorbitol in the semipermeable membrane as pore former has come out successfully to comply with the requirements for controlled release formulations. The osmotic pressure exerted by the osmogen in the core tablet and the amount of pore former in the semipermeable membrane controlled the drug release.

ACKNOWLEDGEMENT: The authors are thankful to ATOZ Pharmaceuticals, Chennai, for providing    facilities to carry out the Research work.