INTRODUCTION:During the last two decades there has been remarkable increase in interest in controlled release drug delivery system. This has been due to various factor viz. the prohibitive cost of developing new drug entities, expiration of existing international patents, discovery of new polymeric materials suitable for prolonging the drug release, and the improvement in therapeutic efficiency and safety achieved by these delivery systems. Now-a-days the technology of controlled release is also being applied to veterinary products also.

The basic rationale for controlled drug delivery is to alter the pharmacokinetics and pharmacodynamics of pharmacologically active moieties by using novel drug delivery system or by modifying the molecular structure and /or physiological parameters inherent in a selected route of administration 1.

Diabetes mellitus is a chronic disease that is characterized by disorders in carbohydrate, protein and lipid metabolism. Its central disturbance appears to involve an abnormality either in the secretion of or effects produced by insulin although other factors also may be involved. Diabetes mellitus is a metabolic disorder in which carbohydrate metabolism is reduced while that of proteins and lipids is increased.

Miglitol is an oral anti-diabetic drug that acts by inhibiting the ability of the patient to break down complex carbohydrates into glucose. It is primarily used in diabetes mellitus type 2 for establishing greater glycemic control by preventing the digestion of carbohydrates (such as disaccharides, oligosaccharides, and polysaccharides) into monosaccharides which can be absorbed by the body. Miglitol inhibits glycoside hydrolase enzymes called alpha-glucosidase. Since miglitol works by preventing digestion of carbohydrates, it lowers the degree of postprandial hyperglycemia.

Miglitol is systemically absorbed; however, it is not metabolized and is excreted by the kidneys.Also miglitol have a shorter half-life of 2 hours, it requires frequent dosing by oral route. Off various recent techniques for controlling drug release, matrix system offer various advantages of ease of formulation, better control on release profile of drug and better patient compliance.

Preparation of sustained release matrix tablets of miglitol: Controlled release tablets of miglitol3, 4 were prepared by direct compression method5 using microcrystalline cellulose as directly compressible vehicle. Hydroxypropylmethylcellulose (HPMC K 15M), Hydroxypropylcellulose and Hydroxyethyl cellulose were used as retardant material for preparation of tablets 6. Other excipients were magnesium stearate as a lubricant and colloidal silicon dioxide as a glidant. For preparation of Controlled release tablets of miglitol, drug and polymer were weighed accurately, all the ingredients were sieved through 40 mesh screen and mixed with other ingredients and the powder mixture was compressed using 16 station rotary tablet compression machine using 5 mm punches. Tablet compression weight was adjusted to 50 mg. In total, 6 formulations containing different amounts of HPC (F1, F2, F3), and HEC (F4, F5, F6) were prepared. The formula for various formulations attempted has been given in Table 1.

Physical characterization of Fabricated Tablets 7: The quality control tests for the tablets, such as hardness, friability, weight variation etc. were determined using reported procedure. The tablet crushing strength was tested by commonly used Dial tablet hardness tester. Friability was determined by Roche® friabilator (Electro lab Pvt. Ltd., India), which was rotated for 4 min at 25 rpm. After dedusting, the total remaining mass of the tablets was recorded and the percent friability was calculated. Weight variation was determined by weighing 20 tablets individually, the average weight. Physical characters observed for various batches are given in Table 2.

Estimation of drug content 8: An UV/Vis spectrophotometric method based on the measurement of absorbance at 625 nm in phosphate buffer of pH 7.4 and 0.1N alkaline potassium permanganate was used as coloring agent for estimation of miglitol.

Same concentration of the standard solution was also prepared by taking 100 mg of drug in a 100ml volumetric flask made up to volume with coloring agent and phosphate buffer pH 7.4.The drug content was estimated by measuring the absorbance of both standard and sample solutions at 625 nm using UV/Vis spectrophotometer (Systronic 2201). Results are given in Table 3.

In-vitro release studies: The in vitro dissolution studies were performed using USP type 2 dissolution apparatus (paddle) at 50 rpm. The dissolution medium consisted of 1.2 pH medium for first 1 hour and for subsequent 11 hours in phosphate buffer pH 7.4 (900 ml), maintained at 37±0.5oC.  The release studies were conducted in triplicate. Aliquot of samples (5ml) were withdrawn at specific time intervals and drug content was determined spectrophotometrically at 625 nm. Results are tabulated in table 3. Results of in-vitro dissolution studies are shown graphically in Figure 1. 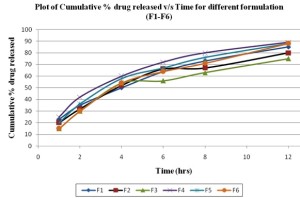 RESULT AND DISCUSSION: In present work an attempt has been made to formulate controlled release matrix tablets of miglitol using three retardants namely hydroxypropyl methylcellulose used as primary rate controlling polymer and effect on in vitro drug dissolution were studied by addition of hydroxypropyl cellulose and hydroxyethyl cellulose different concentrations and combinations.

Physical characterization of tablets: The formulation of tablets was done by using direct compression technique which was found acceptable. All the formulations were prepared according to the formula given in table 1. The prepared matrix tablets were evaluated for various physical properties as indicated in table 2. The results of evaluation studies can be summarized as follows:

The thickness of the formulations was found to be in the range of 2.51±0.05 mm to 2.56±0.01 mm. The crushing strength of all the tablets was in the range of 5.16±0.282 kg 5.47±0.318 kg. The loss in total weight of the tablets due to friability was less than 0.5%. The high value of crushing strength and low friability indicated that the compressibility of miglitol and adjuvant was good.

Formulations F3, F4 and F5 have First Order as best fit kinetic model for drug release indicating the percentage of drug dissolved at a certain time point may be equivalent to the percentage surface area at that time point.

CONCLUSION: Results of present research work demonstrate that the combination of hydrophilic polymers was successfully employed for formulation of miglitol controlled release tablets. It is observed that combination of polymers produce a more linear release from matrix tablets with low standard deviation. Hydroxypropyl methylcellulose and hydroxypropyl cellulose in the concentration of 40% to the total polymer concentration is promising concentration for oral controlled release tablets of miglitol and that can be further give release above 12 hours. In all the formulations, drug release rate is inversely proportional to the concentration of polymer.

From this study, it is possible to design promising oral controlled release matrix tablets containing miglitol for the treatment of type 2 diabetes mellitus diseases with more efficacy and better patient compliance.

ACKNOWLEDGEMENT: The authors are sincerely thankful to Meyer Organics Pvt. Limited (Thane, India) for providing infrastructure facilities to carry out this research work.