ABSTRACTThe conventional chemotherapeutic agents in oncology drug discovery still exhibit poor specificity in reaching tumor site and often restricted by dose-limiting toxicity. The combination of developing drug formulation by utilizing both controlled release technology and drug targeting technology may provide a more efficient and less harmful solution to conquer the limitations found in conventional chemotherapy. In this study, the anticancer drug curcumin was encapsulated in a polymeric magnetic nanoparticle which was synthesized with polymers β-cyclodextrin cross linked with epichlorhydrin, hydrophobically modified dextran byoleoylchloride and magnetite as magnetic material. Particle size, surface morphology, zeta potential and magnetic measurements were used to characterize the developed drug formulations. The developed drug-iron conjugated nanoparticles were found to be within the size range of 100nm with excellent negative surface charge (>-30eV) and spherical in shape. The magnetic susceptibility and magnetization curve substantiate the super paramagnetic property of the developed drug formulation. Furthermore, the drug content and encapsulation efficiency found was directly proportional to epichlorhydrin β-cyclodextrin concentration in the developed formulation. The in-vitro release profile of curcumin loaded magnetic nanoparticles exhibited biphasic initial release first 24 hours and release extended upto 72 hours. The drug release kinetics indicated that drug release from drug formulations were best explained by Higuchi’s equation, as these plots showed the highest linearity but a close relationship was also noted with first-order kinetics

INTRODUCTION: Curcumin, a major polyphenolic pigment of the turmeric root [Curcuma longa L., Family: Zingeberacea] found widely cultivated in several tropical parts of Asia. Turmeric commonly finds use as a spice in Indian cooking, a cosmetic agent for skin care and a traditional Indian and Chinese medicine. It has low intrinsic toxicity but a wide range of pharmacological activities including antitumor, antioxidant, anti-amyloid and anti-inflammatory properties 1.

Several clinical trials dealing with cancer have stated the pharmacokinetics, safety and efficacy of curcumin in humans. However, clinical applications of Curcumin have been hampered by its extremely poor water solubility i.e., less than 1 μg/ml 2. Many methods have been developed for improve solubility of poor water soluble drugs but they induce severe side effects such as neurotoxicity, nephrotoxicity and hypersensitivity etc.

To evade this difficulty, considerable efforts have been devoted to the research and development of alternative methods to improve drug solubility without the use of organic solvents and other relatively harmful excipients.

The development of drug nanocarriers for poorly soluble pharmaceuticals seems to be more promising. The therapeutic application of hydrophobic, poorly water-soluble agents is associated with some serious problems, such as poor absorption and low bioavailability. Colloidal drug delivery systems such as liposomes, micelles and nanoparticles have been intensively examined for their use in tumor therapy. The effectiveness of drug delivery systems can be attributed to their physical and chemical properties.

Recent investigations have been trying to develop targeted therapeutic systems by using external forces, including magnetic fields, ultrasound, electric fields, temperature, light and mechanical forces to concentrate drugs within tumor sites. In these systems, the drug is localized at a specific targeted area by externally generated magnetic forces 7. The magnetic particles tagged with drug molecules are targeted to specific sites of the body by application of external magnetic fields where the drug molecules were gradually released, thus improving the therapeutic efficiency of the drugs by lowering the collateral toxic side effects on the associated healthy cells or tissues.

Cyclodextrins (CDs) are ring-shaped structures composed of glucose units connected by α-d1, 4 bonds forming a polar interior (cavity) and a polar exterior. The cavity gives the CD its unique ability to include other molecules or part of them depending on the size and polarity leading to, e.g. enhanced stability and solubility. CDs, in polymeric form may present some advantages in many cases such as higher solubility than the native CDs, lower toxicity or cooperative binding effects. The CD polymers which have been extensively studied are random cross-linked epichlorhydrin-CD polymers which can be tailored to yield either water-soluble or in-soluble polymers 3.

Dextran (mainly α-1, 6-polyglucose with some α-1, 4 branching) has been particularly popular owing to its clinical approval for use as a plasma expander. Some of hydrophobically modified dextran can form nanoscale particulate system and few of them shows promise carriers for lipophilic drug delivery. The association of hydrophobically modified polycationic dextran derivatives with oppositely charged surfactants directs to aqueous solutions with complex phase behavior and self- assembling morphologies insolution 4. The spontaneous formation of hydrophobic cores in aqueous solution, exhibit a great potential in drug/gene delivery research and for other biomedical applications.

In this present work, the solubility of the curcumin was effectively improved by making inclusion complex within beta cyclodextrin cavities. Also, the drug release was extended by use of hydrophobically modified dextran and the targeting can be facilitated by the functionalizing the complex with the magnetic material.

Synthesis of β-cyclodextrin Copolymer: Cyclodextrin copolymer (Epβ-CD) was prepared by cross linking β Cyclodextrin (β-CD) with Epichlorhydrin (EP) under strong alkaline conditions. 5 g of anhydrous β-CD was dissolved in 8ml NaOH 33% (w/w) solution under mechanical stirring overnight.  Then, 4.07 g of Epichlorhydrin was added to the solution. The solution was heated to 30̊C. In order to obtain a high molecular weight polymer, the reaction was stopped in the vicinity of the gelation point by addition of acetone. The obtained aqueous phase was heated at 50̊C overnight, neutralized with 6N HCl, filtered and then recovered 3.

Synthesis of Oeoyldextran: 100 ml of dimethyl formamide contain 1gm of lithium chloride was prepared and 4gm of dextran (Mw = 40000 g/mol) was solublized by means of magnetic stirring with reflux. Then 390mg oleoylchloride and 0.031ml of pyridine were mixed and stand for 3hours at 50◦C to obtain clear solution.

Finally oleoyldextran was precipitated by the addition of isopropyl alcohol. The precipitate was separated, solublized in deionized water, purified by dialysis and freeze dried.

Formulation of Magnetic Nano Assemblies: The Epichlorhydrin-β-Cyclodextrin copolymer and oleoyldextran were diluted with nanopure water. Both were mixed with 5mg curcumin and allow to sonicated for 15 minutes. To the above mixture 10 ml aqueous solution of 0.0240 g FeCl3.6H2O and 0.0342 g of FeCl2.H2O for 30minutes at 40oC. Three different polymers proportions were chosen was mentioned in Table 1. Finally, ammonia solution was added drop by drop to above mixture. The dark brownish color drug loaded magnetic nanoparticles was collected by centrifugation at 12000 rpm.

Particulate morphology: The morphology of the nanoparticles was observed by field emission scanning electron microscopy (FE-SEM; Hitachi S-4700, Japan). A drop of diluted nanoparticles suspension was placed on a 400 mesh carbon-coated copper grid. After drying, the samples were sputter-coated with a gold-palladium alloy and analyzed at an electron voltage of 5 kV.

Mass of drug in Nanoparticles   X 100

Mass of drug in Nanoparticles   X 100

In-vitro Drug Release Profile: Dialysis bags (cut off size of 12–14 kDa) were filled with a predetermined amount of each formulation (2mg) and put into 40 ml of phosphate buffer solution (pH 7.4) used as receptor phase. The receptor phase was stirred and thermal controlled at 37oC. At fixed time interval 2 ml of the receptor phase were withdrawn and substituted with fresh buffer. The drug release was assayed spectrophotometrically at 420 nm. The cumulative percentage amount of drug release was calculated and graph plotted against time. 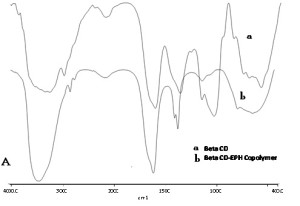 FIGURE 1A: FT-IR SPECTRUM OF β-CD And Epβ-CD COPOLYMER 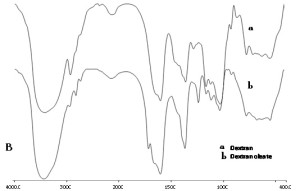 FIGURE 1B: FT-IR SPECTRUM OF DEXTRAN AND OLEOYLDEXTRAN 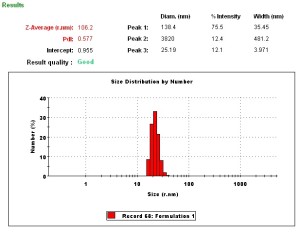 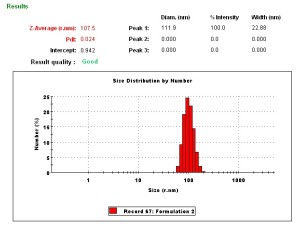 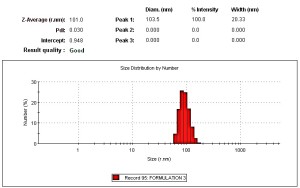 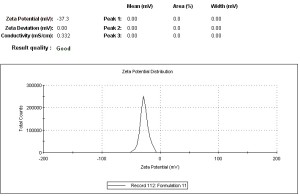 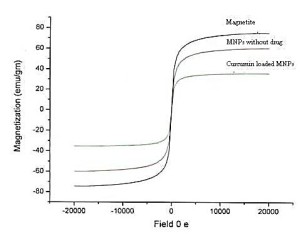 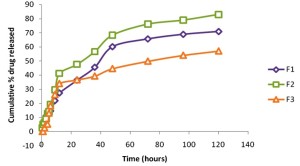 Confirmation of Synthesized Polymers: The differences between the FT-IR spectrums (Figure 1 a) suggest cross-linkage of β-CD in Epβ-CD copolymer. The peaks of C–H stretching (2890–2880 cm−1) and bending (1480–1280 cm−1) from normal alkanes, CH2Cl rocking and wagging band (1190–1070 cm−1) and the C–Cl broad band (700–420 cm−1) confirm the formation of polymer with the addition of ECH. Meanwhile, the similarities between the spectra of β -CD and β –CDEP copolymer also indicate that the basic structural units are preserved in the polymer. From the FTIR spectrum (Figure 1b) of dextran and oleoyldextran the formation of carbonyl group confirmed by C=O stretching 1738 cm−1. C=O stretching (1735-1750 cm−1) functional region for ester groups. Hence the esterification occurred between dextran and oleoylchloride and the formation of oleoyldextran was confirmed.

Compatibility studies: The FT-IR spectrum of individual polymers, drug curcumin, magnetite and mixture of all ingredients were compared and no significant drug excipient interactions were noted. The results confirmed the components used in the formulations were compatible.

The targeting material nano sized magnetite covered by the self-assemblies.

Particle size: The particle size of the formulations was around 100nm with low polydispersity which illustrated from particle size histograms (Figure 2). Smaller particles have higher surface area/volume ratio, which makes it easier for the encapsulated drug to be released from the particles via diffusion and surface erosion and also have the added advantage for the drug-loaded nanoparticles to penetrate into, and permeate through the physiological drug barriers. The smaller particles will have greater ease of entry and durability in the tumors. In contrast, larger particles have large cores, which allow more amount of drug to be encapsulated per particle and allows slow drug release. Thus, control of particle size provides a means of tuning drug release rates.

Based on the parameters shown in Table 2, the curcumin loaded magnetic nanoparticle formulation was optimized. The physiochemical characteristics such particle size, polydispersity, zetapotential, conductivity and magnetic susceptibility were not shown any considerable variance for all three formulations. The SEM images furthermore evident the all formulations were spherical in nature. However encapsulation efficiency and drug content were substantially improved with increasing concentration of Cyclodextrin copolymer (Epβ-CD); because of high amount of hydrophobic drug was encapsulated in β-Cyclodextrin cavities by forming inclusion complex.

In-vitro drug release of Curcumin loaded Magnetic Nanoparticles: The in-vitro release behavior of curcumin loaded magnetic nanoparticles exhibit biphasic pattern initial release for first 24 hours and the release slowly continued upto 96 hours. The release of the drug from magnetic nano carrier is restricted by concentration of oleoyldextran in the formulation. The cumulative percentage of drug release after 96 hours from the formulations was found to be 72.32%, 83.41% and 57.38%. It clearly proven that the cumulative percentage of drug release was noticeable decreased with increasing concentration of oleoyldextran in formulation it is due to gelling property of oleoyldextran (figure 6).