ABSTRACT: The aim of present work was to prepare Diltiazem HCl Fast Dissolving tablets by Direct compression method because of their convenience in administration and suitability for patients having dysphagia using Co-processed excipients - Disintequik MCC25, Disintequik MCC, Lubritose MCC, Lubritose SD, Lubritose AN, NF Fast flo Lactose Monohydrate modified spray dried. The Prepared powdered blend and tablets were evaluated for Pre compression parameters such as Angle of repose, Bulk density, Tapped density, Compressibility index, Hausners ratio and Post compression parameters such as Weight variation, Thickness, Hardness, Disintegration Time, Content uniformity, In-vitro Dissolution studies and Stability studies. All the parameters were within the limits. IR and DSC study showed that drug and excipients were compatible with each other. Twelve formulations were prepared by direct compression method in which F10 was the best formulation using Disintequik MCC25 at a concentration of 4% as it was disintegrated with in 30 sec and drug release was 99.88% over a period of 15 min. The wetting time and disintegration time decreases considerably with the increase in co-processed excipients.

Preparation of Diltiazem HCl 2 Fast Dissolving Tablets: Diltiazem HCl Fast dissolving tablets are prepared for F1 to F12 batches by using different concentration (mentioned in Table 1) of co-processed excipients like Disintequik MCC 25, Disintequik MCC, Lactose monohydrate NF spray dried, Lubritose anhydrous AN, Lubritose MCC, Lubritose SD by direct compression method. Keeping  total weight (100 mg) of  tablet constant in all the formulations. All the ingredients are passed through sieve no. 40 to ensure better mixing. All ingredients were mixed in motar and pestle then magnesium stearate and talc were added. The resulting mixture is compressed 4 into tablet and then tablets were evaluated.

Preparation of Calibration Curve of Diltiazem HCl in pH 6.8 Phosphate Buffer: 100 mg of Diltiazem HCl was weighed accurately and dissolved in pH 6.8 phosphate buffer, which resulted in 1000  µg/ml. Then from  the stock solution 100 µg/ml solution was prepared from this 2, 4, 6, 8, 10 µg/ml were prepared.

The absorbance of the above dilutions were measured using UV-spectrophotometer at 236 nm using 6.8 pH phosphate buffer  as blank. The conc. of corresponding absorbance was given below table. Standard curve was plotted by taking concentration on x-axis and absorbance on y-axis. 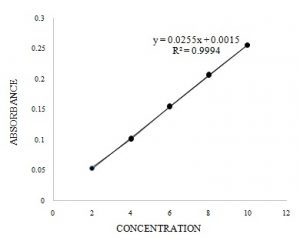 Drug-Excipient Compatibility Study (FTIR): The study was designed to determine compatibility of drug with different co-processed excipients. Completely dried KBR and samples (drug and excipients) taken in 9:1 ratio and grinded for proper mixing. Sample was filled into the holes of stainless steel disk and sandwiched in the hydraulic press until pressure reaches 20,000 psi. After few seconds, pressure was released and pellet was collected. Then the pellet was inserted into the sample holder and run for the spectrum. FTIR spectra of pure drug and excipients separately done  to determine the compatibility. FTIR spectra of drug and excipients were obtained on alpha-Bruker FTIR (Tokyo, Japan). The spectra were scanned over the wave number range of 4000 - 400 cm-1.

Differential Scanning Calorimetry: DSC  is a  thermo - analytical technique carried to know compatability between drug and excipient. In which the difference in the amount of heat required to increase the temperature of a sample and reference is measured as a function of temperature. All the samples were run at a scanning rate of 10 ºC / min from 50 - 350 ºC.

Evaluation of Mixed Powder Blend of Drug and Excipients:

Angle of Repose (θ): Angle of repose was determined by the fixed funnel and free standing cone method. This is the maximum angle possible between the surface of a pile of powder and the horizontal plane.

Different ranges of flowability in terms of angle of repose was shown in Table 4.

Tapped Density (g/ml): The weighed quantity of dry Precompressional blend was taken in a graduated cylinder and the cylinder was allowed to tap for 100 times onto a hard wooden surface from a height of 2.5 cm.

Carr’s Index or Compressibility: It is directly related to flow rate, cohesiveness and particle size.

Hausner’s Ratio: It is the ratio of tapped density to bulk density and was related to interparticle friction.

Porosity (%): Ratio of total volume of void spaces to the bulk volume of material is referred to as porosity. It was calculated by using the formula:

Weight Variation Test: 8 To find out weight variation, 20 tablets of each type of formulation were weighed individually using an electronic balance, average weight was calculated and individual tablet weight was then compared with average value to find the deviation in weight.

Thickness: 8 The thickness of the tablets was determined using a Micrometer screw gauge. Five tablets from each type of formulation were used and average values were calculated. It is expressed in mm.

Hardness: 8 It was determined using the Monsanto hardness tester. The tablet was held along its oblong axis in between the two jaws of the tester. At this point, reading should be zero kg/cm2. Then constant force was applied by rotating the knob until the tablet fractured.

Friability: 8 Friability is the measure of tablet strength. Roche Friabilator was used for testing the friability. A sample of preweighed 6 tablets was placed in Roche friabilator which was then operated for 100 revolutions i.e. 4 minutes. The tablets were then dusted and reweighed. A loss of less than 1% in weight is generally considered acceptable.

Wetting Time: 8 A piece of tissue paper folded twice containing amaranth powder on the upper surface was placed in a small Petri dish (ID = 6.5 cm) containing 6 ml of pH 6.8 Phosphate buffer, a tablet was put on the paper and the time required for formation of pink color was measured as wetting time. The study was performed in triplicate.

Drug Content Uniformity: 8 Five tablets were weighed and crushed with pestle in a motar. The fine powder was weighed to get a 100 mg (equivalent to 60 mg Diltiazem HCl) and transferred to 250 ml conical flask containing 100 ml of 6.8 pH phosphate buffer stirred for 45 min in an sonicator then the solution was filtered and it was analyzed by UV spectrophotometrically at 236 nm and drug content was determined.

After completion of each specified time interval, aliquots of 5 ml was withdrawn from the dissolution media  and the samples were replaced with fresh dissolution medium. After filtration and samples are diluted and absorbance was noted at 236 nm using UV visible spectrophotometer and percentage of drug release was calculated.

UV Absorbance Maxima of Diltiazem HCl: Standard calibration curve obeyed Beer`s law in the concentration range of 2 - 10 µg/ml and the value of regression coefficient was found to be 0.99948 which showed a linear relationship between concentration and absorbance as shown in the Fig. 1.

XRD: The X- RAY diffraction studies of Diltiazem HCl show a characteristic sharp intensity peak at 2θ values of 10.1º, 19º, 22º, which reflected the crystalline nature of drug. Both the formulations showed diffraction peaks at respective 2θ values of pure Diltiazem HCl although their relative intensities were reduced or there was a slight shift in their peaks, suggesting reduced degree of crystallinity of drug in Optimized formulation.

Micromeritic Properties of Powder Blend: The powder mixtures of all the batches (F1 - F12) were evaluated for Bulk density, Tapped density, Carr’s index, Porosity, Hausners ratio, Angle of repose and showed in the Table 6.

In-vitro Drug Release Studies: In vitro dissolution studies were performed in pH 6.8 Phosphate buffer. The dissolution results showed gradient increase with the increase in the concentration of the coprocessed excipients. Among all the formulations F10 was found to show best results with 99.88% release and it is more suitable for fast dissolving tablets  by Direct compression technique.

TABLE 4: RELATIONSHIP BETWEEN ANGLE OF REPOSE AND FLOW PROPERTY

Stability Studies: The results of stability was given in Table 5. After analysis it was found that there was no substantial changes in all parameter of optimized batch F10. The results revealed the product is stable for the period of one month at 40ºC ± 2 ºC / RH 75 ± 5%. 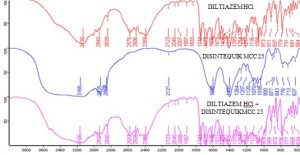 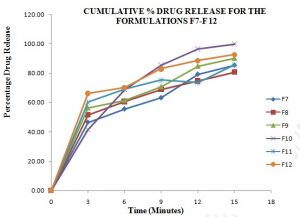 ACKNOWLEDGEMENT: Sincere Thanks to Dr. M. Sunitha Reddy for her valuable guidance throughout the tenure of the project and it is my privilege to express my gratitude to Centre for Pharmaceutical Sciences, IST, JNTUH, for providing appropriate facilities to carry on the above research.