ABSTRACT: The present investigation deals with development of fast dissolving tablets of Domperidone to produce the intended benefits. Domperidone is an antiemetic and a prokinetic medicine. Domperidone is water insoluble drug with problems of variable bioavailability and bio-inequivalence. As precision of dosing and patient’s compliance become important prerequisite for quick relief from emesis, there is a need to develop a formulation for this drug which overcomes problems such as difficulty in swallowing, inconvenience in administration while traveling and better compliance. Hence, the present research work was held to develop a fast dissolving tablet of domperidone using Plantago ovata mucilage as a natural super disintegrant. The tablets were prepared by Direct Compression using microcrystalline cellulose as a directly compressible vehicle. Tablets were evaluated for their physicochemical properties and In-vitro dissolution study. The evaluation studies were performed such as Weight Variation, Thickness, Hardness, Disintegrating Time, Wetting Time, and In-vitro Drug release study. The Disintegration time of Fast Dissolving tablets were increased by the addition of concentration of Super disintegrants.

INTRODUCTION:Oral routes of drug administration have wide acceptance up to 50-60% of total dosage forms. The most popular solid dosage forms are tablets and capsules. Sometimes people experience inconvenience in swallowing conventional dosage forms such as tablet when water is not available, in the case of the motion sickness (kinetosis) and sudden episodes of coughing during the common cold, allergic condition and bronchitis.

For these reason, tablets that can rapidly dissolve or disintegrate in the oral cavity have attracted a great deal of attention 1.

Domperidone is selected as the model drug which comes under anti-emetic class. Domperidone is optimized suits for preparation of FDT as it has longer half-life and in case of vomiting it required quick release. This drug is effective in all the categories i.e. pediatrics, adults, geriatrics. Domperidone blocks the action of dopamine. It has strong affinities for the D2 and D3 dopamine receptors, which are found in the chemoreceptor trigger zone (CTZ) located just outside the blood brain barrier, which regulates nausea and vomiting 3.

% Friability of tablets less than 1% is considered acceptable. Thus, it is necessary that this parameter should be evaluated and the results are within bound limits (0.1-0.9%). 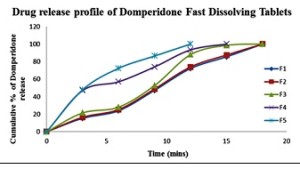 RESULTS AND DISCUSSION: The present study was undertaken with an aim to formulate and evaluate Fast Dissolving tablets of Domperidone using direct compression method with the addition of Plantago ovata mucilage as a natural super-disintegranting agent. Tablets each containing 10 mg of domperidone were prepared by employing different proportions of super-disintegrant at five different concentrations of 2.5%, 5%, 7.5%, 10% and 12.5%. The two most important attributes for the direct compression formula are good flow and good compressibility.

The values obtained for bulk density and tapped density does not affect the compression of tablets. The angle of repose gives information about the flow characteristics of powder mixture. The angle of repose < 30o indicates free flowing material and > 40o with poor flow properties.

Values of angle of repose were found in the range of 18.26o to 19.93o showing that the blend of powder was free flowing can be used for direct compression. The value for Carr’s index was in between 10-15% indicating that all the batches of powder blends were having good compressibility. Thickness was observed between 4.1-4.5 mm, hardness of the tablet was in the range of 3.0-3.9 kg/sq cm, and weight loss in the friability was less than 1% in all the cases.

CONCLUSION:  Domperidone requires quick action for relieving emesis so it is suitable for fast dissolving tablet. From the study results reveal that F5 (12.5%) exhibits faster disintegration i.e. 28 sec and faster dissolution i.e. for 12 min compared to other formulations, since it was found to be better formulation than F1, F2, F3 and F4.

ACKNOWLEDGEMENT: We are thankful to Sherrington’s Formulations, Hyderabad, for providing gift sample of Domperidone. We are also thankful to respected guide and management of Vishwa Bharathi College of pharmaceutical sciences for their support.