ABSTRACT: Emesis is a clinical condition which requires immediate treatment. The present work is aimed to formulate Orodispersible Tablet (ODT) of BCS class II drug Domperidone using Kyron T-314 as superdisintegrant and Avicel 102 as disintegrant by direct compression method. The drug-excipients compatibility study was carried out by Fourier Transform Infrared (FTIR) and Differential Scanning Calorimetry (DSC) which reveals no interaction between drug and excipients. A 32 factorial design was used to investigate effect of independent variables viz. superdisintegrant (Kyron T-314) and disintegrant (Avicel 102) on dependent responses like friability, disintegration time and percent drug release. Sodium lauryl sulphate (SLS) was used in the formulation to aid the dissolution of drug. All the formulations were evaluated for hardness, friability, disintegration time and dissolution rate. The factorial batch F4 containing 1.5 mg Kyron T-314 and 5 mg Avicel 102 has shown better results for all evaluation parameters with drug release of 99.22% and disintegration time of 29 sec. Therefore, factorial batch F4 was selected as the optimized batch.

INTRODUCTION:Tablet is the most widely used dosage form due to convenience in terms of self‐administration, compactness and ease in manufacturing but having the problem of dysphasia (difficulty in swallowing). Hence, demand of more patient‐friendly and compliant dosage forms resulted in orodispersible tablets (ODTs) or mouth dissolving tablets more popular. ODTs were rapidly dispersed in mouth hence can be administered anytime and anywhere and also suitable for geriatric, pediatric and travelling patients.

The aim of present research work is to formulate ODTs of domperidone with sufficient mechanical integrity and to achieve faster disintegration in the oral cavity.

Domperidone is a widely used BCS class II antiemetic drug which acts by an inhibition of the dopaminergic receptors and peripheral gastro-kinetic action. It has low oral bioavailability because of its extensive first pass metabolism. So by formulating ODTs of domperidone, it has been tried to enhance the bioavailability of the drug by avoiding first pass metabolism and improving the dissolution of domperidone by adding SLS in the formulation.

Pearlitol added in the formulation as diluent also works as a sweetener which helps to mask the bitter taste of domperidone. The domperidone ODT formulation was optimised by 32 factorial designs by using Kyron T-314 and Avicel 102 as variables. Formulated tablets were tested for hardness, friability, disintegration, wetting time and in vitro dissolution.

Materials: Domperidone was a gift sample from Wockhardt Pharmaceutical Industries (Aurangabad, M. S. India) and Avicel 102 was gifted from Colorcon Asia Pvt. Ltd. (Goa). All other reagents and chemicals used were of analytical grade.

3)      Preparation of blend for preliminary batches: The drug, diluents, superdisintegrants, disintegrant and sweetener were passed through sieve # 40 and properly mixed together by tumbling mechanism. Talc and magnesium stearate were passed through sieve # 80 and mixed with previous blend. All the materials were directly compressible therefore prepared blend was compressed into tablets using 8mm round concave face punch on a Rimek- Rotary Tablet machine by direct compression method. The composition of the batches is shown in Table 1.

From preliminary study Kyron T-314 was selected for factorial batches.

Weight variation: Indian Pharmacopoeia procedure for uniformity of weight is as follow: Twenty tablets were taken and their weights were determined individually and collectively on a Shimadzu digital weighing balance (Model AUX 220). The average weight of tablets was calculated. All determinations were made in triplicate.

Tablet hardness: Hardness of tablet is defined as the force applied across the diameter of the tablet in order to break the tablet. The hardness of the tablets was determined by diametral compression using a Monsanto Hardness Tester.

Tablet friability: The friability of tablets was determined by using Roche Friabilator. 20 tablets were dedusted, weighed and rotated at 25 rpm. Then tablets were removed, dedusted again and reweighed. Percentage friability was calculated from loss in weight. The weight loss should not be more than 1%.

Where, Y is the dependent variable, b0 is the arithmetic mean response of the nine runs and bi (b1, b2, b12, b11 and b22) is the estimated coefficient for corresponding factor Xi (X1, X2, X12, X11 and X22), which represents the average results of changing one factor at a time from its low to high value. The interaction term (X1X2) depicts the changes in the response when two factors are simultaneously changed. The polynomial terms (X12 and X22) are included to investigate nonlinearity.

Drug- excipient compatibility study by FTIR and DSC:The FTIR spectra of pure drug and tablet blend were taken and shown in figure 1 and 2 respectively 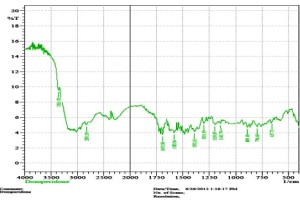 DSC thermogram of pure drug and drug with polymer were carried out and shown in figure 3 and 4 respectively. 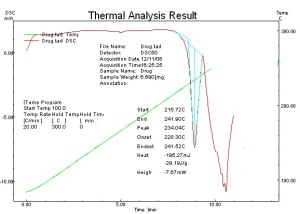 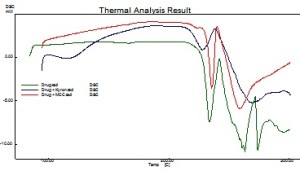 From the above DSC thermograms it is observed that pure domperidone drug gives melting point peak at 234.040 C whereas drug with polymers shows melting point peak near about same to the pure drug. Therefore it is revealed that polymer blend does not show significant shifting in DSC peak due to absence of any interaction with the drug showing good compatibility.

Determination of powder flow properties of factorial batches: From preliminary study, it has been observed that Kyron- T 314 shows better drug release as compared to crosspovidone for which 32 factorial design was applied along with Avicel 102 as disintgrant.

Angle of repose: The angle of repose was found to be within the range of 14.13º to 17.34º indicating excellent flowability for factorial blend.

Evaluation of the Tablets:

All the results were found within acceptable ranges because of shaking of blend for optimum time and resulting in uniform distribution of drug throughout the blend prepared.

The minimum wetting time was found to be 21sec for F9 and maximum 43 sec for F1 batch which was within accepted limits for ODTs.

Disintegration test: In the present study, all tablets disintegrated in less than 55 seconds fulfilling the official requirement for DT as per IP (< 3min) for ODTs. DT is found to be within 15 sec to 41 sec. As the concentration of superdisintegrant and disintegrant increases the disintegration time decreases. 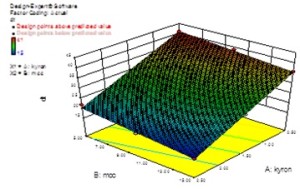 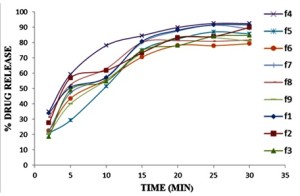 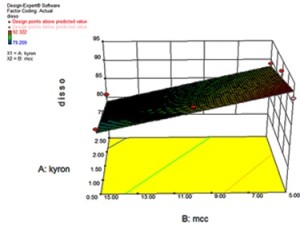 Kyron T-314 and Avicel-102 enhanced the disintegration of the tablets. The combination of superdisintegrant and disintegrant act by absorbing a large amount of saliva when they are placed in mouth which results in breakdown of tablet and showed faster disintegration. Generally Regarded as Safe (GRAS) concentration of SLS is 1%.

Therefore, it has been added in the same concentration to enhance the dissolution of BCS class II domperidone drug. It has been found that batch F4 shows good disintegration and better dissolution as compared to other batches. As the concentration of Kyron T-314 and Avicel 102 increased the disintegration time decreases and % release of the drug increases. Talc is used as glidant to improve the flow properties of the formulation.

CONCLUSION: In the present study, orally dispersible tablets of domperidone were prepared by direct compression technique. The prepared tablets were found to be within the official limits with respect to all the parameters of evaluation. The disintegration time and dissolution studies were performed for the F1-F9 formulations. Among these formulations F4 and F7 showed the optimum disintegration time and cumulative percentage drug release after 30 min. But formulation batch F4 was found to be less friable and also requires less amount of Kyron T-314 as compared to batch F7. Therefore batch F4 was most robust formulation and considered to be optimized batch.

As a result, orally fast disintegrating tablet administration of domperidone may appear to be a promising alternative drug delivery to conventional drug delivery.