FORMULATION AND EVALUATION OF DORZOLAMIDE SPANLASTICS

FORMULATION AND EVALUATION OF DORZOLAMIDE SPANLASTICS

ABSTRACT: Dorzolamide is commonly used to treat glaucoma, damage in the eye often caused by abnormally high pressure in the eye. It is one of the carbonic anhydrase inhibitors which is effective in decreasing intraocular pressure by decreasing the production of the aqueous humor. The main objective of the study was to entrap dorzolamide in a novel nanovesicular carrier system (spanlastics) to ensure sustained and intravitreal delivery in eye to overcome the problem of frequent dosing. The Dorzolamide spanlastics prepared were checked on three factors, i.e., the ratio of Span 60: Tween 80, sonication time and stirring speed. The formulation was evaluated for various parameters such as the size of nano-vesicles, Polydispersity index, zeta potential, and entrapment efficiency. The mechanism involved destabilization of lipid bilayer of the cell, which in turn facilitates diffusion of a drug within the cell and increased bio-availability. Hence, Dorzolamide spanlastics may prove to be an effective formulation in glaucoma.

INTRODUCTION: Glaucoma is a group of neurogenerative diseases of the eye that leads to irreversible loss of vision and increases IOP, which is strongly associated with the onset and progression of primary open-angle Glaucoma 1. According to WHO, it is the second leading cause of visual impairment & blindness in the world 2. Dorzolamide is a carbonic anhydrase inhibitor that is effective in decreasing intraocular pressure for Glaucoma therapy, mainly by reducing the production of the aqueous humor. Therefore, the market available formulations of Dorzolamide is a sterile and aqueous suspension having granular sensations, but ADRs are significantly more frequent like low bioavailability and poor patient compliance caused by the

Uncomfortable feeling and undesirable tears, which is washed off to wipe the drug rapidly after instillation, also, ocular discomfort, Blurred vision, eye pain, keratitis, dry eye, and conjunctiva are some other difficulties related to the conventional dosage form. Conventional methods also lead to other limitations such as undesirable side effects arising as a result of unfavorable pharmacokinetics and biodistribution, drug degradation, and low drug efficacy due to inefficient uptake at the target site 3. Hence, there is an utmost need for developing a novel vesicular carrier system for Dorzolamide to attain improved corneal permeability.

This can be achieved by incorporating the drug content into such nano ranged carriers that selectively bind to target cells. A novel, elastic and deformable vesicle named spanlastics has been recently introduced for eradicating the limitations of conventional drug delivery systems. Spanlastics are a special class of highly deformable and elastic vesicular carriers that entrap the drug in the core cavity in the form of a bilayer and show many folds better corneal permeation 4.

The main aim of this study was to develop spanlastic vesicles for the treatment of glaucoma. This study was an approach for the development of a formulation capable of providing enhanced ocular drug delivery; to solve the problem of ocular delivery of Dorzolamide by using a novel drug carrier system.

Ultraviolet (UV) Spectrophotometric Analysis: UV-Vis spectra of Dorzolamide were acquired on a UV 1800, Shimadzu, USA series spectrophoto-meter with 1 cm quartz cell and a slit width of 2.0 nm. The analysis was carried out at a wavelength range of 200-400 nm. materials used in the study were of analytical grade.

Attenuated Total Reflectance (ATR): ATR experiments were carried out with IR Affinity-1S, Shimadzu, Japan. The scanning range used was 400–4000 cm-1, and the resolution was taken at 2 cm-1. The spectra of dorzolamide were obtained using the potassium bromide disk method (2 mg drug in 180 mg KBr). A typical infrared scan was generated in the mid-infrared region of the light spectrum, and the peaks mentioned in standards were compared with those obtained in gift sample 5.

Preparation of Standard Curve of Dorzolamide by UV-Visible Spectroscopy:

Standard Curve of Dorzolamidein Distilled Water: Dorzolamide (10mg) was accurately weighed and dissolved in 100 ml of distilled water to obtain the stock solution of concentration 200 µg/ml. The stock solution was further diluted with a suitable amount of distilled water to obtain the dilutions in a concentration range of 40µg/ml to 200µg/ml. All the concentrations were analyzed by UV spectrophotometer at ʎmax (253 nm). The analysis was performed in triplicate, and average of the results was plotted to prepare standard curve between concentration and absorbance 6, 7, 8.

Preparation of Dorzolamide loaded Spanlastics by Ethanol Injection Method: Spanlastics were prepared by Ethanol Injection Method. Accurately weighed tween 80 (10 g) was dissolved in 20 ml of distilled water and heated to the temperature of 80 °C. 40 gm. of Spans 60 was dissolved in 16 ml of ethanol and sonicated for 5 min at 50 °C. Accurately weighed 10 g of the drug was added to the tween solution. Prepared span solution was then added dropwise to the tween solution, which was being stirred at different speeds using a 30 gauze syringe at a fixed rate of 1 ml/min. Stirring was continued for 30 min at 80 °C then another 30 min at room temperature. Finally, the formulation was made up to 40 ml using distilled water.

Vesicle Size by Differential Light Scattering: The vesicle size (Z-average) and size distribution, i.e., polydispersity index (PDI) of the prepared formulations were determined by Dynamic Light Scattering technique (DLS), using a computerized inspection system (Malvern Zetasizer, Nano-ZS, Malvern, U.K.) with DTS (Nano) software, at a wavelength of 633 nm and at a scattering angle of 173°, at a room temperature of 25 °C. The measurements were performed using a He-Ne laser at 633 nm by using an avalanche photodiode detector after diluting the formulation. It utilizes the principle of Dynamic Light Scattering (DLS), which involves the measurement of the brownian motion of the particles. Brownian motion depends on the particle size and viscosity of the dispersing agent. The value of the Z-average diameter that is referred to as the harmonic intensity-weighted average hydrodynamic diameter of the vesicles was reported as the mean droplet size of vesicles 13. All the measurements were repeated three times. The PDI was a dimensionless measure of the width of size distribution calculated from the cumulative analysis ranging from 0 to 1. A small value of PDI indicates a monodispersed population, while a large PDI indicates a broader distribution of droplet size 11, 12.

Zeta Potential: The zeta potential of particles (a measurement of the electrostatic repulsion between particles) is a good predictor of the stability of the formulation. A low zeta potential increases the probability of aggregation within a short time. Zeta potential of the spanlastics formulation was estimated on the basis of electrophoretic mobility under an electric field (Zetasizer Nano ZS, Malvern Instruments, UK). The measurements were performed after diluting the formulation (100µL dispersed into 1 mL millipore water) at 25 ºC 14-16.

Transmission Electron Microscopy: The prepared spanlastics were visualized by TEM at 200 kV (JEOL 2100F, USA). Samples were obtained by dispersing the formulation (0.1 ml) up to 1 ml of double-distilled water. A drop of prepared dispersion was stratified over a carbon-coated copper grid for approximately 15 min. Excess dispersion was removed with a filter paper. The sample was allowed to air dry and observed under transmission electron microscope 17, 18, 19.

Elasticity Measurement: Spanlastics possess the unique property of deformability, which was measured by extruding the vesicle through a polycarbonate membrane of 100 nm pore diameter (rp), at a constant pressure. After 5 min extrudate was collected and weighed (J). The average vesicle size after extrusion (rv) was obtained by using photon correlation spectroscopy. The elasticity of vesicular membrane (D) was calculated using below-mentioned formula: 20

Stability Study: The prepared formulation was kept at 4 °C as well as at 25 °C for an interval of 3 months to see the degradation profile.

UV Analysis: The spectrophotometric scan of Dorzolamide distilled water showed one maxima near 254 nm and a plateau around 276 nm Fig. 1. 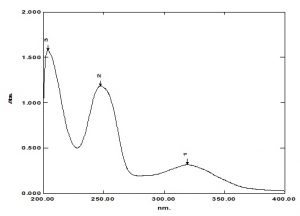 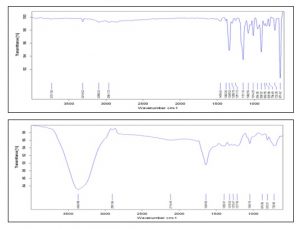 Preparation of Standard Curve of Dorzolamide by UV-Visible Spectroscopy: 10 mg of dorzolamide was diluted to accurate dilutions with ethanol and distilled water. The prepared concentrations were analyzed by UV Spectrophotometer at a wavelength of maximum absorption for Dorzolamide, i.e., max of 254 nm. The analysis was performed in triplicate (n=3), and the average of the results was plotted to prepare a standard curve between concentration and absorbance. The regression coefficient and equation of straight line were then determined.

TABLE 2: RESULTS FOR STANDARD CURVE OF DORZOLAMIDE IN DISTILLED WATER

Size Distribution of Spanlastics: Dynamic Light Scattering technique (DLS), was used using a computerized inspection system (Malvern Zetasizer, Nano-ZS, Malvern, U.K) with DTS (Nano) Software, The selected wavelength was 633 nm at a scattering angle of 173º, with room temperature condition. Size distribution depicted by a PDI value of 0.735 was found to be uniform, and Z- average or size of formulation (n=3) was obtained as 150.6 nm, as shown in Fig. 5. 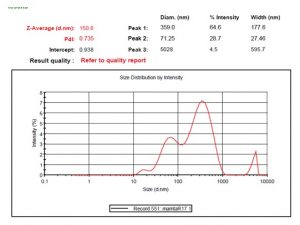 Zeta Potential: High zeta potential values, either positive or negative, are expected to render stability to the system due to strong electrostatic repulsion, and a lower value indicates aggregation. Zeta sizer (ZS) with Malvern Instruments, UK, was used. The average zeta potential and conductivity of the formulation was determined. Zeta potential of for-mulation was obtained as 17.2 as shown in Fig. 6. 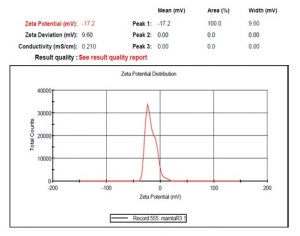 Elasticity Measurement: The polycarbonate membrane of 100 nm pore diameter (rp), at constant pressure, was used. After 5 min extrudate was collected and weighed (J), values obtained were put in the formula below to determine the deformability.

Deformability was found to be 24.8. Spanlastics showed only 11.3% change in the size of vesicles after extrusion through 100 nm polycarbonate membrane. Thus, spanlastics formulation is highly elastic in nature. This deformability characteristic permits the elastic vesicles to penetrate spontaneously through the biological membranes, minimizing the risk of complete vesicle rupture while squeezing through.

Stability Studies: No phase separation, color change or coalescence was observed during the thermodynamic stability studies. The optimized formulation was also found to be stable after 3 months interval at 4 °C as well as 25 °C.

CONCLUSION: Thus, it can be concluded that spanlastics act as a breakthrough in the ophthalmic drug delivery system. These vesicular systems can be exploited to achieve site-specific action for both lipophilic and hydrophilic drugs. These elastic carrier systems have found applications in delivering drugs to ocular, oral, topical, trans-ungual, nasal, and the middle ear.

Spanlastics act as a vesicular system with the advantage of the drug to be administered in the form of a drop, which increases patient compliance.

ACKNOWLEDGEMENT: The author thanks Century Pharmaceuticals, Vadodara, India, for providing dorzolamide as gift samples for this work. We are grateful to Coral Drugs (India) for their technical assistance in carrying out the analysis.