ABSTRACT: The aim of this research work was to formulate and optimize a floating drug delivery system of famotidine. In the present study, preparation of famotidine floating beads, in-vitro evaluation of Floating Drug Delivery System (FDDS), prediction of the release, and optimization of polymers ratio to match target release profile was investigated. An attempt was made to prepare oil entrapped floating beads of famotidine prepared by inotropic gelation method using Sodium alginate (SA), Tamarind seed powder (TSP) where SA & TSP ratio was 95:5 respectively, Span 80 with Calcium Chloride as curing agent and various concentration of Sunflower oil as a floating agent. Size of all the beads was found spherical and uniform and percentage yield of all formulation was found approximate 85%. It was observed that famotidine release from uncoated beads in a considerable “burst” during the first 30 min, due to rapid water ingress and creation of aqueous channels, which suggested that drug release was dependent on dissolution and diffusion of the drug through the polymer matrix. Buoyancy study showed that all formulation was floating, except FB-2, FB-6 and FB-11.The results showed that beads formulated with mixture of SA and TSP (FB-1) showed the highest drug release compared to other formulations.

INTRODUCTION: Gastric emptying of dosage forms is an extremely variable process and ability to prolong and control the emptying time is a valuable asset for dosage forms, which reside in the stomach for a longer period of time than conventional dosage forms. Gastro retentive dosage forms significantly extend the period of time, over which drug may be released and thus prolong dosing intervals and increase patient compliance.

This system can be retained in the stomach and assist in improving the oral sustained delivery of drugs that have absorption window in a particular region of the gastrointestinal tract, thus ensuring optimal bioavailability.1, 2

Floating systems having low density systems that have sufficient buoyancy to float over the gastric contents and remain in the stomach without affecting the gastric emptying rate for a prolonged period. While the system floats over the gastric contents, the drug is released slowly at the desired rate, which results in increased gastric retentive time and reduces fluctuation in plasma drug concentration.9, 10 Formulation of floating beads containing famotidine as a drug candidate, which remain in stomach or upper part of GIT for prolonged period of time, therefore the maximum drug release is maintained at desired site.

Famotidine 5, 11 is a histamine H2-receptor antagonist. It is widely prescribed in gastric ulcers, duodenal ulcers, Zollinger-Ellison syndrome and gastroesophageal reflux disease.12, 13, 14-16 In the management of benign gastric and duodenal ulceration the dose is 40 mg daily by mouth at bedtime, for 4 to 8 weeks. In gastroesophageal reflux disease the recommended dose is 20 mg by mouth twice daily for 6 to 12 weeks; where gastroesophageal reflux disease is associated with esophageal ulceration, the recommended dosage is 40 mg twice daily for a similarperiod8. For the short term symptomatic relief of heartburn or non-ulcer dyspepsia a dose of 10 mg up to twice daily is suggested. In the Zollinger-Ellision syndrome the initial dose by mouth is 20 mg every 6 hours, increased as necessary; dose up to 80 mg daily have been employed.11 The low bioavailability (40-45%) and short biological half-life (2.5-4.0 hours) of famotidine following oral administration favours development of a sustained release formulation.17

Famotidine was obtained as a gift sample from Aristo Pharmaceutical Ltd. (Baddi, India). Sodium alginate was purchased from SD Fine Chemicals. Calcium chloride was purchased from Molychem Pvt. Ltd. Sunflower oil was purchased from Amrit Banaspati Co. Ltd. Span 80 was purchased from Loba Chemie Pvt. Ltd. India. All other chemicals were of analytical grade issued by the institute and used as such without further processing. UV/VIS Spectrophotometer (Shimadzu 1800, Japan) having double beam detector configuration was used for drug analysis.

Transfer the accurately weighed quantity of sodium alginate and TSP (95:5) in a clean beaker containing distilled water and stirred for 15 min. To this solution, add the required sunflower oil and stirred continuously for 30 min at 1000 rpm with addition of span 80 to form an emulsion. Add Famotidine to the formed emulsion with continuous stirring for 15 min.

This emulsion was extruded drop wise through a 20 gauge syringe needle into 200 ml of calculated concentration of calcium chloride solution; continuous stirred at 100 rpm until all the emulsion is extruded. Thus formed emulsion gel beads were allowed to stand in the solution for 60 min before being separated to improve their mechanical strength and washed with distilled water. The formed beads were collected and allowed to dry overnight in tray dryer at 40°C   and stored in desiccators for further investigation.18 Table 1 lists the formulation variables for different formulations of famotidine loaded floating beads.

Characterization and optimization of floating beads of famotidine:

Partial size analysis: The diameter of 20 dried beads of each formulation was determined using a dial thickness meter. Measurement for each sample was repeated 3 times. Mean diameter and standard deviations were recorded.

% Yield for the different formulations was calculated by the formula:

An accurately weighed amount of 100 mg of Famotidine floating beads were crushed and dissolved in 100 ml of 0.1N HCl (pH 1.2) solution by shaking on rotary shaker at 300 rpm overnight. The resulting solution was then filtered using 0.45µm pore size filter and the filtrate was suitably diluted. The resultant solution was analyzed spectro-photometrically at 266 nm and entrapment efficiency.19

Determination of the beads buoyancy:

The obtained beads were studied for buoyancy and floating time using USP type 2 dissolution test apparatus. Fifty beads of each batch were placed in 900 ml of 0.1N HCL (pH 1.2) and agitated at 50 rpm. Temperature of medium was maintained at 37±0.5˚C. The floating ability of beads was measured by visual observation for the overall time period of 12 hr (after 2 hr each). The beads that floated on the surface of the medium and those that settled down at the bottom were recovered separately.20

USP type II dissolution test apparatus was used for studying the drug release properties of floating beads. The weighed quantity of beads equivalent to 30 mg of Famotidine were introduced in 900 ml of 0.1N HCl (pH 1.2) maintained at 37±0.5°C. The paddles were rotated at 50 rpm. Aliquots of 5 ml solution were withdrawn at predetermined time intervals and by fresh dissolution mediums. The withdrawn samples were analyzed for Famotidine content spectrophotometrically at 266 nm. Concentrations were calculated using calibration curve developed in respective media. Dissolution release profiles were plotted with percentage drug released at different time intervals. 22

The DSC thermo grams of physical mixture of famotidine and the polymers showed no characteristic peaks of the polymers and famotidine peaks were still present but slightly shifted from their original positions which could be possibly due to an ionic interaction and this characteristic features of drug melting suggested that no problem of incompatibility. Some modification of drug peak, such as changes in area, shape or peak temperature were found, but they arose simply from mixing the components (Fig. 1). 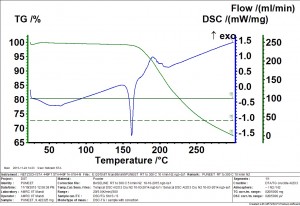 The physical mixture showed identical spectrum with respect to the spectrum of the pure drug, indicating there is no chemical interaction between the drug molecule and polymers. (Fig. 2). 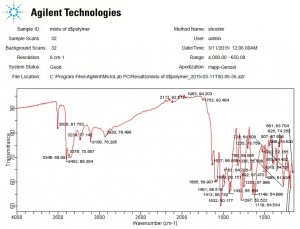 The formulated beads were in the size range of 0.94 ± 0.022 to 2.00 ± 0.020 mm for formulations, FB1 to FB15 as shown in Table 2. The bead size was found to increase with an increase in oil and polymer concentration. This might be due to an increase in the droplet viscosity caused by higher oil content.

All the formulations showed good buoyancy for more than 12 hours except FB2, FB6 & FB11 and shown in Table 3. This might be due to lesser symmetry in shape and probably oil leakage from the formulation leading to unequal forces of released medium (0.1N HCl) on their surfaces. The beads with higher concentration of oil were more floatable than those with lower concentrations of the oil. This may be attributed to a decrease in density of the beads with an increase in oil concentration. 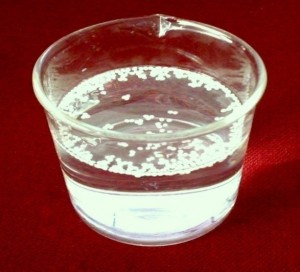 The swelling behavior of alginate polymer is an important factor controlling the release of the drugs from the bead systems. Alginate beads swell when hydrated. The swelling index was found to be in the range between 10 ± 0.28 to 26 ± 0.38% were shown in Table 3. Swelling studies revealed that it was dependant on the polymer concentration, as the swelling was more significant for beads containing high polymer content. Further inspection of the results it was found unexpectedly that increasing oil and calcium chloride concentration decreased the swelling in the floating beads.

The release rate of Famotidine was high with low sodium alginate concentrations. Batch FB1 showed 82.38 % drug release within 10hr. at acidic medium. The weight of the beads was found to increase with increase in the concentration of alginate. The drug release was found to be slower in formulations with higher alginate and oil concentration. The slow release of the drug from the Famotidine loaded floating beads may be due to the formation of drug-oil dispersion system in the oil pockets of the beads. The drug has to firstly diffuse from the oil pockets into the polymer matrix followed by transportation out of the polymeric matrix into the dissolution medium. Batch FB4 showed minimum 42.82% drug release within 10 hr. Hence, transportation of the drug from the beads could be attributed as a two step process, which may be responsible for the slow drug release from the buoyant calcium alginate TSP beads.

CONCLUSION:The present study deals with the investigation carried out on developing a floating drug delivery system releasing Famotidine concomitantly in stomach for treating peptic Ulcer and as effective antacid. DCS study of drug and FTIR studies of drug and polymer shows all possible aspects which are favorable for the formulation of floating beads in ratio of polymers (95:5) i.e., sodium alginate 95% and Tamarind powder 5%. Famotidine floating beads were efficiently prepared by ionic gelation method by virtue of high gelating and cross- linking property of alginate molecule. Total 15 formulations were prepared and characterized.

As the total concentration of polymer increased, shape of beads also became spherical to irregular like. The percentage yield was found to be 71.69 ± 97.3 %. The mean diameter of beads were found to be in the range of 0.94 ± 0.022 to 2.00 ± 0.020 mm. The bead size was found to increase with an increase in oil and polymer concentration. All the formulations showed buoyancy for more than 12hr. As the amount of oil in the formulation increased, there was a decrease in floating lag time. The swelling index was found to be in the range between 10 ± 0.28 to 26 ± 0.38%. Swelling studies revealed that it was dependant on the polymer concentration, as the swelling was more significant for beads containing high polymer content. Entrapment efficiency was found minimum for FB5 (82.18 ± 0.66) and maximum for formulation FB4 (99.7 ± 0.32).

Entrapment efficiency is dependent upon oil and polymer concentration. The beads exhibited a biphasic release profile as an initial rapid drug release phase (burst effect) which was followed by a sustained, gradually increasing drug release pattern after 1hr extending up to 10 hr. The in-vitro drug release of formulated beads was in the range of 42.82 ± 1.34 to 82.38 ± 1.43. Formulation FB1 showed highest drug release up to 10 hr. Since all the prepared formulations has acceptable physical properties and enough total floating for sustained release action, therefore the main criteria for selection is the percentage yield, physical parameters, buoyancy, entrapment efficiency, capsule fill volume and in-vitro release which consequently leading to select FB1 as the best formulation.