ABSTRACT: An enteric coating is a polymer barrier applied to oral tablets; it prevents dissolution and disintegration of tablet in the gastric environment. Some drugs like aspirin that have an irritant effect on the GI Track after administration, can be prepared as enteric-coated tablet. Aspirin is used to reduce fever and to relieve pain from various conditions. By coating aspirin tablet with polymer it prevents the stomach bleeding. Novel biodegradable epoxy resins having special properties like dissolution in alkaline solution but remain intact in acidic solutions. It is biodegradable, biocompatible, made from 100% bio-based content, non-toxic in nature. Owing to these above advantages we have used bio epoxy resin for coating on aspirin table and tested its performance at various conditions. Coated tablets are found resistant to gastric pH and percentage drug release after 90 min was found 48%. The performance data was compared with various commercial brands available in the market. Coating aspirin tablet with bio epoxy resin is a safe alternative.

INTRODUCTION: Aspirin is acetyl salicylic acid; it is used to treat fever, pain, inflammation. In addition to this it isused in specific anti-inflammatory conditions like rheumatic fever, pericarditis, and Kawasaki disease. It is drug of choice in long term prevention of heart attack, ischemic strokes, rheumatic arthritis and a blood clot. Aspirin is commonly used NSAID Non-Steroidal Anti-inflammatory drug. Most common side effects of aspirin include stomach ulcers, stomach bleeding and upset stomach 1. Risk of upper gastrointestinal bleeding and dyspepsia is common problem while administration of aspirin tablets even in small dose.

The patient with previous history of gastric ulcer or upper GI bleeding are at high risk. Enteric-coated formulations are designed to prevent the drug release from the tablet in gastric track, it resists tablet in gastric environment and passes the tablet through the stomach without dissolution 2. Although, there are various enteric-coated formulations of aspirin available in the market, Our aim is to formulate biodegradable enteric coated tablet. Novel biodegradable epoxy resin was used for coating. To formulate epoxy resin, Epoxy soya oil treated with citric acid and tetrahydro furan this later used as coating material. Aspirin tablet was formulated by using tablet compression machine, then coated with Epoxy polymer by simply dip-coating 3.

MATERIAL AND METHOD: All the chemicals were of reagent grade, purchased from commercial source and used without further purification. Aspirin pure drug was kindly gifted by Wockhardt Ltd., Aurangabad, Maharashtra.

Estimation of Aspirin: An Ultraviolet (UV) spectrophotometric method based on the measurement of absorbance at 265 nm in pH 6.8 phosphate buffer was used for the estimation of Aspirin. The method obeyed Beer’s law in the concentration range of 10-50 μg/ml.

Preparation of Tablet: The Aspirin Tablets were prepared by direct compression method. Other excipients like MCC, Talc, and Magnesium stearate were used. The formula for prepared aspirin tablet is given in following Table 1. Tablets were punched by using karnavati tablet punching machine and 8 mm punch was used.

Preparation of Bio Epoxy Polymer: Weighed quantity of citric acid 1.90 gm dissolved in 20 ml tetrahydrofuran with stirring, to this 10 gm of epoxy soya oil added. The mixture heated and stirred continuously till volume reduced to 15 ml, to this 5 ml of ethyl acetate was added. This finally formed Bio- Epoxy polymer then used for coating of tablet 3.

Weight Variation Test: 4, 5, 6, 7 To study weight variation, 20 tablets of each formulation were weighed using an electronic balance and the test was performed according to the official method.

Thickness: Thickness and diameter of tablets were determined using calibrated Vernier caliper. Five tablets from each batch were used, and their average values calculated.

Friability: For each formulation, the friability of 20 tablets was determined using the Roche friabilator. This test subjects a number of tablets to the combined effect of shock abrasion by utilizing a plastic chamber which revolves at a speed of 25 rpm, dropping the tablets to a distance of 6 inches in each revolution. A sample of preweighed 20 tablets was placed in Roche friabilator, which was then operated for 100 revolutions for 4 min. The tablets were then dusted and reweighed.

Hardness: For each formulation, the hardness of 6 tablets was determined using calibrated Monsanto hardness tester. The tablet was held along its oblong axis in between the two jaws of the tester. At this point, reading should be zero kg/cm2. Then constant force was applied by rotating the knob until the tablet fractured. The value at this point was noted in kg/cm2.

In-vitro Dissolution Studies: In-vitro drug release study for the prepared coated tablets was conducted for a period of 90 min using a six-station USP type II (paddle) apparatus at 37 ºC and 75 rpm speed. Tablets were kept in 0.1 N HCl for 2 h and later dissolution media replaced with phosphate buffer pH 6.8. Dissolution study was carried out for 90 min in phosphate buffer pH 6.8. Sampling was done after 10, 20, 30, 45, 60 and 90 min interval; samples of 10 ml were withdrawn from dissolution medium and replaced with fresh medium to maintain the volume constant.

The sample solution was analyzed at 265 nm for Aspirin by a UV-spectrophotometer. The amounts of drug present in the samples were calculated with the help of appropriate calibration curve. Also, the in-vitro drug release study for the marketed tablets of different brand was conducted. The results are shown in Table 4 and Fig. 2.

Stability Study: 8, 9 In the present study, stability studies were carried out at 40 ºC and 75% RH for a specific time period up to 90 days for optimized formulation. For stability study, the tablets were sealed in aluminum packing coated inside with polyethylene. These sample containers were placed in desiccators maintained at 75% RH. Formulations after every month studied for friability, hardness, and cumulative percentage drug release. 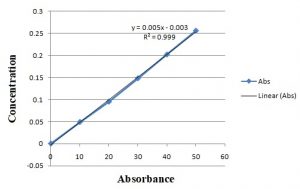 In-vitro Drug Release Study: 12, 13 Dissolution data of matrix tablets are reported in the following table. Dissolution study for each formulation was carried out in triplicate.

After replacing media 0.1 N HCl studied for UV absorbance. Drug release in 0.1 N HCl for 2 h through all the enteric-coated aspirin tablets both marketed as well as prepared, drug release was very negligible. Later the tablets replaced in actual dissolution media reported in IP, Phosphate buffer pH 6.8. Comparative data of percentage drug release for the tablet coated with bio epoxy polymer and marketed brand is given in the following table.

Tablet wt. has been increased by 2.3 times after coating

CONCLUSION: With bio epoxy polymer coating, enteric-coated aspirin tablet was designed successfully. It was found that the tablet remains as it is in 0.1 N HCl for 2 h, after replacing media with Phosphate buffer pH 6.8, the percentage drug release through the tablet at 90 min was found 48.85%. By changing thickness of coating, we can increase % drug release. % drug release of prepared tablet compared with other marketed formulations. Tablet was found stable for 90 days in stability study. By using bio epoxy polymer, coated tablet of aspirin was successfully designed and evaluated.

ACKNOWLEDGEMENT: The author would like to express her thanks to Dr. S. J. Wadher Professor, School of Pharmacy, Swami Ramanand Teerth Marathwada University, Vishnupuri, Nanded, Maharashtra.