FORMULATION AND EVALUATION OF EUDRAGIT RS 100 LOADED MICROSPONGES OF FLUTRIMAZOLE

FORMULATION AND EVALUATION OF EUDRAGIT RS 100 LOADED MICROSPONGES OF FLUTRIMAZOLE

ABSTRACT: Flutrimazole is a wide spectrum antifungal drug. It is used for the topical treatment of superficial mycoses of the skin. Conventional topical products typically provide active ingredients in relatively high concentrations but with a short duration of action. Microsponge Systems are designed to allow a sustained rate of release of the active ingredients, offering a potential reduction in side effects while maintaining their therapeutic efficacy. Therefore, the aim of the present study was to produce microsponges containing flutrimazole which were able to control the release of drug to the skin. Compatibility of drug with formulation components were established by Differential Scanning Colorimetry (DSC) and Fourier Transform Infra-Red (FTIR). Microsponges were prepared by using previously optimized emulsion solvent diffusion method. Shape and surface morphology were examined using Scanning Electron Microscopy (SEM). Drug content, particle size analysis and loading yield were determined in the prepared microparticles. The micrograph revealed microporous nature of microsponges. It was shown that the drug: polymer ratio, stirring rate, volume of dispersed phase influenced the particle size and drug release behavior of the formed microsponges. Flutrimazole microparticles were then incorporated into standard vehicles for release studies. Kinetics of drug release from microsponge itself followed Higuchi matrix model. Drug release was observed controlled as compared with the cream containing free drug.

INTRODUCTION:Numerous antifungal drugs have been prescribed to kill or inhibit the growth of fungi. Even though the therapeutic efficacy of these drugs has been well established, inefficient delivery could result in inadequate therapeutic index and local and systemic side effects including cutaneous irritation, peeling, scaling and gut flora reduction

Flutrimazole is a new wide spectrum antifungal drug. It is used for the topical treatment of superficial mycoses of the skin. Flutrimazole is an imidazole derivative. It interferes with the synthesis of ergosterol by inhibiting the activity of the enzyme lanosterol-14-demethylase 1, 2.

Release of active ingredients from conventional topical formulations over an extended period of time is quite difficult 3. These vehicles require high concentrations of active agents for effective therapy because of their low efficiency of delivery system, resulting into irritation and allergic reactions in significant users.

In contrast, Microsponge technology allows an even and sustained rate of release, reducing irritation while maintaining efficacy. Their high degree of cross-linking results in particles that are insoluble, inert and of sufficient strength to stand up to the high shear commonly used in manufacturing of creams, lotions, and powders.

Their characteristic feature is the capacity to adsorb or “load” a high degree of active materials into the particle and on to its surface. Its large capacity for entrapment of actives, up to three times its weight, differentiates microsponge products from other types of dermatological delivery systems 4, 5.

The purpose of the present investigation was to;

(b)      Study the effect of drug: polymer ratio, stirring rate, inner phase solvent volume on the physical characteristics of the microsponges, and

(c)       Compare the release rate from microsponges incorporated in topical formulations with that of the same formulations prepared with pure Flutrimazole.

Preparation of Microsponges: Themicrosponges containing flutrimazole were prepared by quasi-emulsion solvent diffusion method using different polymer amounts. To prepare the inner phase, Eudragit RS 100 was dissolved in ethyl alcohol. Then flutrimazole was added to solution and dissolved under ultrasonication at 35oC. This inner phase was poured into the PVA solution in water (outer phase). The mixture was stirred for 60 min to remove ethanol from the reaction flask. The mixture was filtered to separate the microsponges. The microsponges were dried in an air-heated oven at 40oC for 12 hr and weighed to determine production yield 6.

For the evaluation of the effect of drug: polymer ratio on the physical characteristics of microparticles, different weight ratios of drug to ethyl cellulose (1:1, 3:1, 5:1, 7:1, 9:1, 11:1, 13:1) were employed. For optimizing the preparation method, volume of organic solvent, Stirring speed and time and volume of aqueous phase were changed, and the characteristics of the prepared microparticles were evaluated.

Compatibility studies: Compatibility of drug with reaction adjuncts was studied by Fourier Transform Infra-red spectroscopy (FT-IR). Effect of process of entrapment on crystallinity of the drug was studied by Differential Scanning Colorimetry (DSC).

The loading efficiency (%) of the microsponges was calculated according to the following equation:

Scanning Electron Microscopy: The morphology of microparticles was examined with a scanning electron microscope (SEM-JEOL Instrument, JSM-6360, Japan) operating at15 kV. The samples were mounted on a metal stub with double adhesive tape and coated with platinum/palladium alloy under vacuum 8.

Drug release from Microsponges: Accurately weighed loaded microsponges were placed within 50 ml of ethanol in glass bottles. The later were horizontally shaken at 37oC at predetermined time intervals. Aliquots samples were withdrawn (replaced with fresh medium) and analyzed UV spectrophotometrically at 218 nm. The content of Flutrimazole was calculated. The solutions were protected from light throughout the assay 9.

The temperature of the aqueous phase and oil phase was adjusted to 70oC and 65oC respectively. The mixture was stirred, while allowing it to cool to room temperature and whilst a cream formed. At this point either flutrimazole powder or flutrimazole microsponges was added to the formulation and mixed to prepare a homogenous cream.

Preliminary experiments showed that there was no interaction of receptor phase with membrane or the formulation placed on the donor side. The receptor phase was stirred at 500 rpm during the study. A predetermined amount of cream mounted on the donor side of Franz cell. Samples were withdrawn at different time intervals and these were analyzed spectrophotometrically at 209 nm.

In-vitro Drug Release Kinetic study 10:To analyze the mechanism of drug release from the microsponges and cream containing microsponges, release data were fitted to the following equations:

Where Qt is the amount of drug dissolved in time t, Q0 is the initial amount of drug in the solution (most times, Q0 = 0) and K0 is the zero order release constant expressed in units of concentration/time.  To study the release kinetics, data obtained from in vitro drug release studies were plotted as cumulative amount of drug released versus time

Where C0 is the initial concentration of drug, k is the first order rate constant, and t is the time. The data obtained are plotted as log cumulative percentage of drug remaining vs. time which would yield a straight line with a slope of -K/2.303

Where, KH is the Higuchi constant. The data obtained were plotted as percentage drug release versus square root of time

Preparation of Flutrimazole Microsponges: Free flowing powder particles of MDS were obtained by quasi-emulsion solvent diffusion method with Eudragit RS 100 in ethyl alcohol. The quasi-emulsion solvent diffusion method used for the preparation of the microsponges was simple, reproducible, and rapid. Surface morphology by SEM observed in fig. 1 revealed the microporous nature of microsponges. 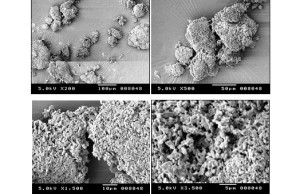 DSC provides information about the physical properties of the sample as crystalline or amorphous nature and demonstrates a possible interaction between drug and other excipients in microsponges 12. The thermal behavior of Flutrimazole, physical mixture, Eudragit RS 100, & formulation MDS 7 containing drug are shown in fig. 2. 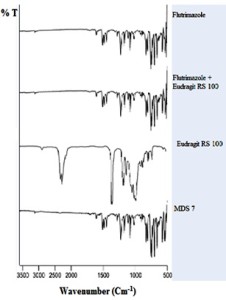 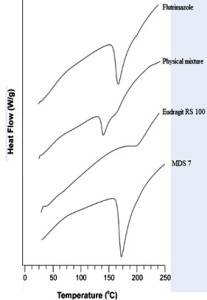 Drug release from Microsponges: The release profiles obtained for the microsponge formulations are presented in figure 3. The present study showed that increase in the ratio of drug: polymer resulted in a increase in release of FLZ from microsponges. This could be due to formation of a thinner matrix wall (due to decrease in the amount of polymer) in microsponges with higher drug: polymer ratios lead to a shorter diffusion path, and consequently increased drug release rates 14. Different kinetic models (zero-order release, first order release, Higuchi equation) were employed to fit the data relating to the kinetics of the release of Flutrimazole from microsponges. The results as observed in table 2 showed that the release kinetics on the basis of the highest r2 values best fitted the Higuchi matrix model. 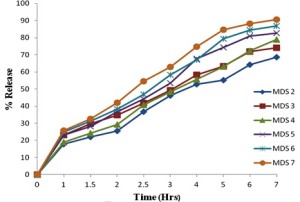 FIG. 3: IN VITRO DRUG RELEASE PROFILES OF FLUTRIMAZOLE FROM MICROSPONGES

TABLE 2: KINETIC DATA FROM IN VITRO DRUG RELEASE MODELS FOR THE MICROSPONGE FORMULATIONS 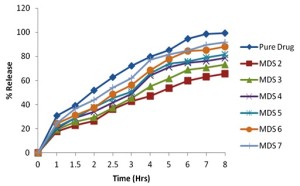 CONCLUSIONS: This study presents an approach for production of Flutrimazole microsponges with prolonged release characteristics. Ease manufacturing, simple ingredients and wide range actives can be entrapped along with a programmable release make microsponges extremely attractive. Production yield, drug content and encapsulation efficiency of MDS 7 showed that flutrimazole can be loaded in form of microsponges in very high percentages and this is supported by mean particle size value. In-vitro drug diffusion study concluded that the microsponges prepared by quasi-emulsion solvent diffusion method controls the release of Flutrimazole for longer period of time when compared to drug itself.