Reducing heart burden lessens the heart muscle's demand for oxygen, and further helps to prevent angina in patients with coronary artery disease. The usual initial antihypertensive oral dose of Amlodipine besylate tablets is 5 mg once daily with a maximum dose of 10 mg once daily.

Small, fragile, or elderly patients, or patients with hepatic insufficiency may be started on 2.5 mg once daily and this dose may be used when adding Amlodipine besylate tablets to other antihypertensive therapy 1-2.

Fast dissolving drug delivery is rapidly gaining acceptance as an important new drug delivery technology. Fast dissolving formulation is popular as Novel Drug Delivery Systems because they are easy to administer and lead to better patient compliance. Paediatric and geriatric patient have difficulty in swallowing the conventional dosage forms these dosage forms dissolve or disintegrate in the oral cavity within a minute without the need of water or chewing.

Fast dissolving tablets are also called as mouth-dissolving tablets, melt-in mouth tablets, Orodispersible tablets, rapimelts, porous tablets, quick dissolving etc. The advantages of fast dissolving dosage forms are increasingly being recognized in both industry and academia. The fast disintegrating tablets prepared by direct compression method, in general, are based on the action established by natural and synthetic superdisintegrants 3-6.

Plant products serve as an alternative to synthetic products because of local accessibility, environment friendly nature and lower prices compared to imported synthetic products. Majority of investigations on natural polymers in drug delivery systems are centered on polysaccharides and proteins. Number of natural, synthetic and semi synthetic polymer materials is used in the various drug delivery systems. Recent trend towards the use of vegetable and non-toxic products demands the replacement of synthetic additives with natural one. The natural materials like gums, mucilages have been extensively used in the field of drug delivery for their easy availability and no side effects 7.

In this study, natural substances like Hibiscus rosa – sinensis mucilage and modified gum karaya were used as superdisintegrants in the formulation of amlodipine besylate fast dissolving tablets.

Extraction of mucilage from Hibiscus rosa - sinensis: The fresh leaves of Hibiscus rosa - sinensis Linn. were collected, washed with water to remove dirt and debris, and dried. The powdered leaves were soaked in water for 5 6 h, boiled for 30 min, and kept aside for 1 h for complete release of the mucilage into water . The material was squeezed from an eight fold muslin cloth bag to remove the marc from the solution. Acetone was added to the filtrate to precipitate the mucilage in a quantity of three times the volume of the total filtrate. The mucilage was separated, dried in an oven at a temperature  <  50oC,  collected,  dried  powdered,  passed  through  a  sieve  (number  80) ,  and  stored  for further use in desiccators 8.

Preparation of modified gum karaya: Powdered gum was taken in a porcelain bowl and subjected of heating using sand bath for different time periods at different temperatures. The results of swelling capacity and viscosity studies revealed that the modified forms possessed swelling property similar to GK, but viscosity was decreased as a function of temperature and time period of heating. However, it was observed that GK samples were charred, when heated at 140oC. In the preparation of modified form of GK, no further change in viscosity of GK was observed by heating it at 120oC for more than 2h. Hence, these conditions of heating at 120oC for 2h were selected to prepare modified form of GK. The prepared modified form of GK was finally re-sieved (100 mesh) and stored in airtight container at 25oC 9.

Standard calibration curve: Solutions ranging from 2 to 10µg/ml were prepared in 0.1N Hcl buffer (pH 1.2 fluid). Absorbance was measured for each solution at λmax of 361 nm, using Schimadzu UV spectrophoto-meter.

Preparation of Fast Dissolving Tablets of Amlodipine Besylate: Fast dissolving tablets of amlodipine besylate was prepared by direct compression method. The drug and excipients were passed through sieve no.80 to ensure better mixing, natural superdisintegrants Hibiscus rosa – sinensis mucilage and Modified gum karaya were used in different proportions. The powders were compressed into tablets on tablet punching machine using 9mm punch and weight of the tablet is 200mg (Table 1).

Where, θ is the angle of repose, h is the height in cms, r is the radius in cms.

Where, M is the mass of powder, Vb is the bulk volume of the powder.

Where, M is the mass of powder, Vt is the tapped volume of the powder.

Powder Flow Properties: The flow properties were determined by;

Where, Wa and Wb were the weights of the tablet before and after water absorption.

IR spectra of Amlodipine besylate and its physical mixture with formulation excipients were determined using FT-IR. And found, there is no interaction between the drug and excipients (Fig. 1, 2, 3).

The pre-compression parameters of all the formulations were depicted in the table 2. The angle of repose, bulk density, tapped density, Carr’s index and Hausner’s ratio shows good flowability in almost all the formulations resulting suitable for the preparation of Fast dissolving tablets.

The prepared tablets were evaluated for different parameters and results were depicted below.

The wetting time was rapid in all the formulations. Wetting is closely related to inner structure of tablets. This may be due to ability of swelling and also capacity of absorption of water. The results were depicted in the table 2. The water absorption ratio that is the uptaking of water was very fast and which that ratio found higher.

Dissolution profile of the formulations FHR1, FHR2, FHR3, FHR4, FHR5 and formulations FMGK1, FMGK 2, FMGK 3, FMGK 4, and FMGK 5 is shown in Figure 4 & 5. As the concentration of the polymer increased there was decrease in the disintegration time and increase in dissolution of drug. 90% of the drug was released from the all the formulations within 15 minutes.

From drug release, it was observed that increase in concentration of superdisintegrant increases the drug release. Therefore formulation FHR5 and FMGK5 was selected as the optimized formulation as it showed good release, good wetting property and good precompression and good post compression results. From the values obtained, it is proved that all the formulations FHR1 to FHR5 and FMGK1 to FMGK5 dissolution (release) of the drugs follows first order. 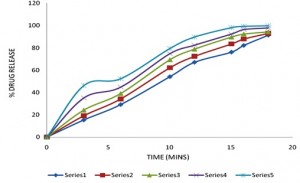 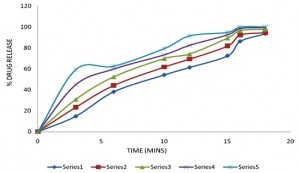 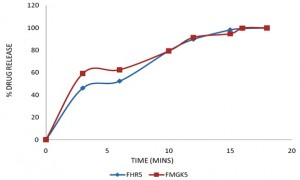 The optimized formulations FHR5 and FMGK5 were kept for accelerated stability and monitored for appearance, hardness, friability, drug content, in vitro dispersion time, wetting time and dissolution profile study and found to stable for all the different parameters (Fig. 6).