ABSTRACTThe aim of work is to characterization and evaluation of fast dissolving tablet of Granisetron hydrochloride using three superdisintegrants like crosscarmellose sodium, crosspovidone and sodium starch glycolate. FTIR studies revealed that there was no physico-chemical interaction between granisetron hydrochloride and other excipients. The tablets were prepared by dry granulation method and all had the same amount of ingredients except, the superdisintegrant level. The prepared batches of tablets were evaluated for uniformity of weight, thickness, hardness, friability, disintegration time and in-vitro dissolution study. Tablet containing crosspovidone showed excellent disintegration time and drug release as compared to other formulations

INTRODUCTION: The tablet is the most widely used dosage form because of its convenience in terms of self- administration, compactness, and ease in manufacturing. For the past one decade, there has been an enhanced demand for more patient- friendly and compliant dosage forms. As a result, the demand for developing new technologies has been increasing annually. Since the development cost of a new drug molecule is very high, efforts are now being made by pharmaceutical companies to focus on the development of new drug dosage forms for existing drugs with improved safety and efficacy together with reduced dosing frequency, and the production of more cost- effective dosage forms 1.

Many patients find it difficult to swallow tablets and hard gelatin capsules and thus do not comply with prescription. This results in high incidence of noncompliance and ineffective therapy 2. The proper choice of superdisintegrant and its consistency of performance are of critical importance to the formulation development of fast dispersible tablets 3. The objective of the present study is to develop fast dispersible tablets of Granisetron Hydrochloride and to study the effect of functionality differences of superdisintegrants on the tablet properties as well as to improve the patient compliance without compromising the therapeutic efficacy.

Granisetron hydrochloride is chemically endo-1-methyl- N- (9- methyl- 9- azabicyclo [3.3.1] non- 3- yl) -H- indazole- 3- carboxamide hydrochloride, a selective 5-HT3 receptor antagonist, which may have beneficial therapeutic effects in the treatment of vomiting and nausea resulting from cancer therapy 4-6. It has an improved side effect and tolerability profile, a lower risk of drug interactions and a longer duration of action than other 5-HT3 receptor antagonists. It is also an effective and well-tolerated agent in the management of chemotherapy-induced, radiotherapy-induced and post-operative nausea and vomiting in adults and children 7, 8. Its main effect is to reduce the activity of the vagus nerve, which is a nerve that activates the vomiting center in the medulla oblongata. Granisetron hydrochloride undergoes extensive hepatic first pass metabolism with a Bioavailability of 60%. The terminal elimination half-life is 3 to 14 hours after oral administration. Granisetron hydrochloride is about 65% bound to plasma proteins 9.

In the present study, an attempt was made to develop fast dispersible tablets of Granisetron Hydrochloride and to improve its bioavailability.

Granules retained on 44 mesh were assayed for drug content and an amount equivalent to 2.4 mg of Granisetron hydrochloride for one tablet was weighed and blended with superdisintegrants and magnesium stearate as per the table 1. Superdisintegrants and magnesium stearate were passed through being added during the lubrication step. Lubrication was done for three minutes in a plastic container. Lubricated granules were punched and evaluated.

Bulk density: Apparent bulk density (ρb) was determined by placing presieved drug excipients blend into a graduated cylinder and measuring the volume (Vb) and weight (M) “as it is”.

Tapped density: The measuring cylinder containing a known mass of blend was tapped for a fixed number of taps. The minimum volume (Vt) occupied in the cylinder and the weight (M) of the blend was measured. The tapped density (ρt) was calculated using following formula.

Angle of repose: Angle of repose (θ) was determined using funnel method. The blend was poured through a funnel that can be raised vertically until a maximum cone height (h) was obtained. The radius of the heap (r) was measured and angle of repose was calculated.

Compressibility index: The simplest way of measurement of free flow property of powder is compressibility, an indication of the ease with which a material can be induced to flow is given by % compressibility that is calculated as follows:

Tablet friability: The friability of the tablets was measured in a Roche Friabilator (Camp-bell Electronics, Mumbai). Tablets of a known weight (Wo) or a sample of 20 tablets are dedusted in a drum for a fixed time (100 revolutions) and weighed (W) again. Percentage friability was calculated from the loss in weight as given in equation as below. The weight loss should not be more than 1 %. Determination was made in triplicate.

In-vitro dissolution study: The release rate of Granisetron hydrochloride from fast dispersible tablets was determined using United State Pharmacopoeia (USP) XXIV dissolution testing apparatus II (paddle method). The dissolution test was performed using 900 ml of phosphate buffer pH 6.8 as a dissolution medium, at 37±0.5oC and 50 rpm. A sample (5 ml) of the solution was withdrawn from the dissolution apparatus at different time interval (minutes). The samples were filtered through a 0.45m membrane filter. Absorbance of these solutions was measured at 302 nm using a PG instrument T80 model UV/VIS spectrophotometer. Cumulative percentage of drug release was calculated using an equation obtained from a standard curve.

Drug content estimation: Powder equivalent to 2.24 mg of Granisetron hydrochloride was dissolved in phosphate buffer pH 6.8. Sufficient dilutions were made to obtain 10 mcg/ml solution. Absorbance of the resulting solution was measured at 302 nm using a PG instrument T80 model UV/VIS spectrophotometer. From the absorbance values, amount of drug present in the given tablet was calculated. Procedure was repeated by using four more tablets from the same formulation and the average value of all five tablets was calculated.

FTIR Spectroscopy: The Fourier-transform infrared spectra of Granisetron hydrochloride and mixture granisetron hydrochloride with other excipients were obtained by using FTIR spectroscopy- 5300 (JASCO Japan). Samples were prepared by KBr pressed pellet technique. The scanning range was 400-4600 cm-1 and the resolution was 4 cm-1. The spectra are shown in Fig. 1 to 5. 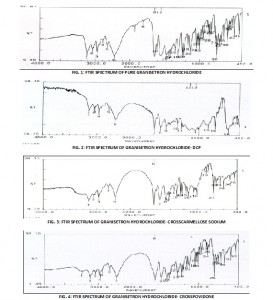 RESULTS AND DISCUSSION: FTIR studies revealed that there was no physico-chemical interaction between Granisetron hydrochloride and other excipients (Fig. 1 to 5).  For each designed formulation, blend of drug and excipients was prepared and evaluated for micromeritics properties shown in table 2. Bulk density was found to be between 0.32±0.007 to 0.38±0.001gm/ml and tapped density between 0.35±0.002 to 0.43±0.001 gm/ml for all formulations. Hausner’s ratio was found below 1.2 and Carr’s compressibility index between 10- 16 for all formulations. The angle of repose is known to be a measure of flowability and the angle of repose of all formulations was found between 20.14±0.63 to 25.31±1.07 it indicate good flow properties of granules.

All batches of the tablets were evaluated for various physical parameters shown in table 3. The weight variation of all the tablets was within the ranges of 097±0.18 to 104±0.56 mg. The hardness of the tablets was within the range of 2.0±0.12 to 2.8±0.15 kg/cm2. The friability of all tablets below 1% and the disintegration time of different formulations are shown in figure 6. All the formulations had disintegration time was found between 42±1.24 to 70±1.10 seconds (crosspovidone> crosscarmellose sodium> sodium starch glycolate). The influences of superdisintegrants on the dissolution of granisetron hydrochloride from the tablets are shown in Fig. 7 to 9. The drug release increased with increase in the level of superdisintegrants. Out of thirteen formulations DCP4 formulation shows best drug release 99.90% in 10 minutes. 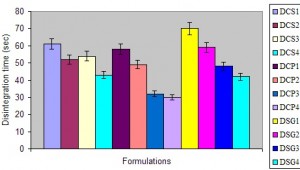 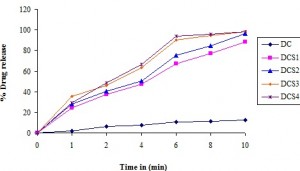 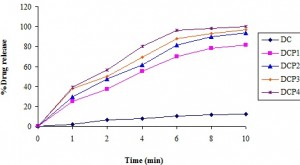 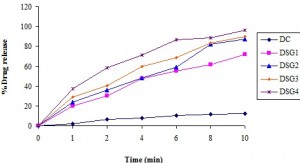 CONCLUSION: It can be concluded that disintegration time and dissolution rate of granisetron hydrochloride can be enhanced to a great extent by dry granulation technique with the addition of superdisintegrants. Further investigations are needed to confirm the in-vivo efficiency.

ACKNOWLEDEMENT: The authors are thankful to Natco Pharma Ltd. (Hyderabad, India) for providing gift sample and also very much thankful to Prof. Kishore Singh K. Chatrapathi, President, R.M.E.S’s College of Pharmacy Gulbarga, for his valuable support and providing necessary facilities to carry out the research work.