FORMULATION AND EVALUATION OF FAST DISSOLVING TABLETS OF SUMATRIPTAN SUCCINATE

FORMULATION AND EVALUATION OF FAST DISSOLVING TABLETS OF SUMATRIPTAN SUCCINATE

ABSTRACT: In the present study an attempt has been made to prepare fast dissolving tablets of Sumatriptan Succinate to improve dissolution rate of the drug in oral cavity & hence better patient’s compliance & effective therapy. Sumatriptan Succinate is a 5-HT1D (5-hydroxy tryptamine 1D) receptor agonist, used in the treatment of migraine and cluster headache. It has low bioavailability due to its first pass metabolism. Hence the main objective of the study was to formulate fast dissolving tablets of Sumatriptan succinate to achieve a better dissolution rate and further improving the bioavailability of the drug. Fast dissolving Sumatriptan succinate was prepared using superdisintegrants Crospovidone, Croscarmellose Sodium, and Preglatinised Starch using the direct compression method. The tablets prepared were evaluated for Thickness, Uniformity of weight, Drug content, Hardness, Friability, Wetting time, in vitro and in vivo disintegration time, in vitro drug release. The formulation F3 containing Crospovidone (8%) was found to give the best result since it showed enhanced dissolution, which leads to improved bioavailability, improved effectiveness and hence better patient compliance.

These additional, superior benefits allow patients to take their medication anytime and any place under all circumstances. The fast dissolving drug delivery system offers a giant leap forward in drug administration by providing a new and easy way of taking medication 1.

Sumatriptan succinate (STS) is an agonist for 5-Hydroxytryptamine receptors and it is widely prescribed for the treatment of migraine and cluster headaches. Sumatriptan undergoes an extensive biotransformation, mainly through Mono Amino Oxidase-A.

It is a white to off line white powder bitter in taste and is readily soluble in water and in saline. The oral bioavailability of Sumatriptan Succinate is 14 ± 5 % owing to an important first pass metabolism. It has an elimination half-life of 2.5 hours and absorption zone from the upper intestinal tract. Plasma protein binding is low 14% to 21% 2.

Sumatriptan stimulates 5-HT receptors (1D subtype) resulting in selective vasoconstriction of inflamed and dilated cranial blood vessels in the carotid circulation. It also blocks the release of vasoactive neuropeptides from perivascular trigeminal axons in the dura mater during migraine and may inhibit the release of inflammatory mediators from the trigeminal nerve 2-3.

MATERIALS AND METHOD: Sumatriptan succinate was a gift sample from Wockhardt Pharmaceuticals, Aurangabad, Croscarmellose sodium (CCS) and Crospovidone(CP),Preglitanised Starch were gift samples from Elder Pharmaceuticals Dehradun. Directly compressible microcrystalline cellulose (MCC), aspartame and mannitol (directly compressible) were obtained from Seron Pharma Dehradun. All the other ingredients were of analytical grade.

Preparation of Fast Dissolving Tablets by direct compression method 4, 11, 13, 15: Fast dissolving tablets of Sumatriptan Succinate were prepared by Direct Compression (Die No. 8). All the Ingredients were passed through mesh # 60. Required quantity of each ingredient was taken for each specified formulation and all the ingredients were co-grinded in mortar and pestle (table 1).

1)      Bulk Density (BD): It is the ratio of total mass of powder to the bulk volume of powder. It was measured by pouring the weight powder (passed through standard sieve #20) into a measuring cylinder and initial weight was noted. This initial volume is called the Bulk Volume. From this the Bulk Density is calculated according to the formula mentioned below. It is expressed in g/ml and is given by:

The result of bulk density is shown in table 2.

2)      Tapped Density (TD): It is the ratio of Total Mass of the powder to the Tapped Volume of the Powder. The measuring cylinder containing a known mass of blend was tapped for a fixed number of taps. The minimum volume (Vt) occupied in the cylinder and the weight (M) of the blend was measured. It is expressed in g/ml and is given by:

The result of tapped density is shown in table 2.

3)      Angle of Repose (θ): Angle of repose (θ) was determined using funnel method. The blend was poured through a funnel that can be raised vertically until a maximum cone height (h) was obtained. The radius of the heap (r) was measured and angle of repose was calculated.

The result of angle of repose is shown in table 2.

4)      Carr’s Index (or) % Compressibility: It indicates powder flow properties. It is expressed in percentage and is given by

The data of percentage compressibility is shown in table 2.

5)      Hausner Ratio: Hausner’s ratio is an indirect index of ease of powder flow. It was calculated by the following formula.

where, Dt is the tapped density; Db is the bulk density.

Lower Hausner’s ratio (<1.25) indicates better flow properties than higher ones (>1.25). The data for hausner ratio is shown in table 2.

a)      Weight Variation: Twenty tablets were selected randomly from each formulation and weighed individually using a Shimadzu digital balance (BL-220H). The individual weights were compared with the average weight for the weight variation.

b)      Thickness: Ten tablets from each formulation were taken randomly and their thickness was measured with a micrometer screw gauge.

c)      Hardness and Friability: Hardness of the tablets was measured using the Monsanto Hardness Tester (Pharmalab, Ahmedabad, India). The friability of a sample of twenty tablets was measured using a USP type Roche friabilator (Pharmalab, Ahmedabad, India). Pre-weighed tablets were placed in a plastic chambered friabilator attached to a motor revolving at a speed of 25 rpm for 4 min. The tablets were then dusted, reweighed and percentage weight loss (friability) was calculated.

d)     Drug Content Uniformity: For the content uniformity test, ten tablets were weighed and pulverized to a fine powder, a quantity of powder equivalent to 50 mg of Sumatriptan Succinate was extracted into distilled water and liquid was filtered (0.22 mm membrane filter disc (Millipore Corporation). The Sumatriptan Succinate content was determined by measuring the absorbance at 228 nm (using UV-vis spectrophotometer, Shimadzu 1700) after appropriate dilution with distilled water. The drug content was determined using standard calibration curve as shown in Fig. 1. The mean percent drug content was calculated as an average of three determinations. 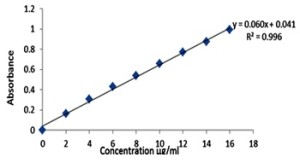 e)      In vitro Dispersion Time: One tablet was placed in a beaker containing 10 ml of pH 6.8 phosphate buffer at 37±0.5ºC and the time required for complete dispersion was determined.

g)      Water Absorbtion and Wetting Time: A piece of tissue paper folded twice was placed in a small Petridis containing 6 ml of water. A tablet of known weight was put on the paper and the time required for complete wetting of tablet was measured. The wetted tablet was then weighed, water absorption ratio R was determined using the following equation and the result is shown in table 3

h)      In- vitro Drug Release Study 11, 12, 17: Dissolution rate was studied by using USP type-II apparatus at 50 rpm (USP XXIII Dissolution Test Apparatus) using 900 ml of phosphate buffer pH 6.8 as dissolution medium. Temperature of the dissolution medium was maintained at 37±0.5ºC; aliquot of dissolution medium was withdrawn at every 5 minute interval and filtered. The absorbance of filtered solution was checked by UV spectrophotometric method at 228 nm and concentration of the drug was determined from standard calibration curve. Dissolution rate was studied for all designed formulations and the results are shown in table 4 and the graph is shown in figure 2. 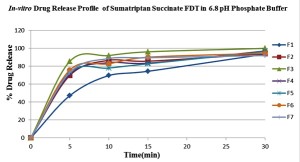 RESULT AND DISCUSSION: The present study was undertaken to formulate and evaluate fast dissolving tablets of Sumatriptan Succinate by direct compression method using Croscarmellose sodium crospovidone and Preglatinised Starch as a superdisintegrants. The amount of Superdisintegrants was optimized in the formulation of FDTs. The total 7 were formulation (F1-F7) prepared using different concentration of Croscarmellose sodium crospovidone and Preglatinised Starch to study its effect on disintegration time.

Percent weight variation was observed between 4.1 and 6.0 which were well within the acceptable limit for uncoated tablets as per Indian Pharmacopoeia. It is well known that the tablets with more hardness show longer disintegration time. Since mechanical integrity is of paramount importance in successful formulation of FDTs, hence the hardness of tablets was determined and was found to be in the range of 3.5 to 3.8 Kg/cm2. Friability was observed between 0.39 and 0.51%, which were below 1% indicating sufficient mechanical integrity and strength of prepared tablets. The disintegration time for all formulations was found to be 19-54 seconds and wetting time was 16-43 seconds.

CONCLUSION: Fast dissolving tablets of Sumatriptan Succinate were prepared by direct compression method using Croscarmellose sodium, crospovidone and Preglatinised Starch as a superdisintegrants. The tablets disintegrated rapidly in oral cavity and had acceptable hardness and friability. In vitro drug release from the tablets shows significantly improved drug dissolution. It was concluded that in direct compression method, crospovidone was best superdisintegrant with MCC as binding agent.

Hence, it could be concluded that the superdisintegrant based fast dissolving tablets of Sumatriptan Succinate would providing quick onset of action without need of water for swallowing or administration.