FORMULATION AND EVALUATION OF FAST DISSOLVING TABLETS OF TELMISARTAN

FORMULATION AND EVALUATION OF FAST DISSOLVING TABLETS OF TELMISARTAN

ABSTRACT: The patients with sudden increase blood pressure have markedly reduced function ability and extremely restless, in such cases rapid onset of action is of prime importance. So the patients would be benefited from acute treatment by using Fast dissolving drug delivery system. Telmisartan is an Anti-hypertensive drug which is insoluble in water; hence the drug may be slowly or incompletely dissolves in the gastro-intestinal tract. So the rate of dissolution and therefore its bioavailability is less (bioavailability 42%). In the present study an attempt has been made to prepare. Fast Dissolving tablets of Telmisartan by using Superdisintegrants– Crosscarmellose Sodium, Doshion ,Sodium Starch Glycolate, level of addition to increase the rate of drug release from dosage form to increase the dissolution rate and hence its bioavailability. The tablets were prepared by Direct Compression methods and the prepared blend and tablets were evaluated for their physicochemical properties and In-vitro dissolution study. The evaluation studies were performed such as Weight Variation, Thickness, Hardness, Disintegrating Time, Wetting Time, and In-vitro Drug Release and Stability Study. The Disintegration time of Fast Dissolving tablets were increased by the addition of concentration of Superdisintegrants.

INTRODUCTION: Oral drug administration has been one of the most suitable and widely accepted by the patients for the delivery of most therapeutically active drugs. Various dosage forms like tablets, capsules and liquid preparations have been administered by oral route. But, due to some unsuitable physiological conditions of the gastro-intestinal tract like relatively poor absorption, presence of various digestive enzymes of the gastro-intestinal lumen and epithelium, poor absorption efflux (i.e. by P-glycoprotein, etc.) and first pass metabolism by hepatic enzymes, the administration of some drugs is affected.  Also, it limits many drugs to reach into the therapeutic level. Hence, to minimize the problems associated with drug- absorption through gastro-intestinal membrane, researchers have been developing intraoral drug delivery systems that will enhance the therapeutic drug level, avoids first-pass and gut-wall metabolism, increases the bioavailability of active medicament or improve convenience of dosing. The target sites for local drug delivery in the oral cavity include the following: buccal, sublingual, periodontal region, tongue and gum 1. Other desirable targeting sites adjacent to oral cavity include pharynx, larynx, adenoids and tonsils 2.

i)        Sublingual delivery, which is systemic delivery of drugs through the mucosal membranes lining the floor of the mouth to the systemic circulation;

ii)      Buccal delivery, which is drug administration through the mucosal membranes lining the cheeks and the area between the gums and upper and lower lips to the systemic circulation;

iii)    Local delivery, which is drug delivery to periodontal, gingival, and odontal delivery for the local treatment of aphthous ulcers, bacterial and fungal infections and periodontal disease.

Fast Dissolving Tablet: Recent advances in novel drug delivery system aims to enhance safety and efficacy of drug molecule by formulating a convenient dosage form for administration and to achieve better patient compliance 3.One such approach is “fast disintegrating tablets”.

The oral route remains the perfect route for the administration of therapeutic agents because the low cost of therapy, manufacturing and ease of administration lead to high levels of patient compliance. Many patients have difficulty swallowing tablets and hard gelatin capsules and consequently do not take medications as prescribed 4.

It is estimated that 50% of the population is affected by this problem, which results in a high incidence of noncompliance and ineffective therapy. The demand for solid dosage forms that can be dissolved and suspended in water, chewed, or rapidly dissolved in the mouth is particularly strong in the pediatric and geriatric markets, with further application to other patients who prefer the convenience of a readily administered dosage form.

Less frequently, they are designed to be absorbed through the buccal and esophageal mucosa as the saliva passed into the stomach. In the latter case, the bioavailability of a drug from fast dispersing formulations may be even greater than that observed for standard dosage forms 5.

A fast disintegrating or dissolving system or tablet can be defined as a solid dosage form that can disintegrate or dissolve within 30 seconds, in the oral cavity resulting in a solution or suspension without administration of water.

The fast disintegrating tablets are synonymous with fast dissolving tablets; melt in mouth tablets, rapimelts, Porous tablets, Orodispersible, quick dissolving or rapidly disintegrating tablets. Their growing importance was underlined recently when European pharmacopoeia adopted the term “Orodispersible tablet” as a tablet that to be placed in the mouth where it disperses rapidly, before swallowing significance of this drug delivery system includes administration without water, accuracy dosage, easy portability, alternative to liquid dosage forms ideal for pediatrics’ & geriatric patients and rapid onset of action 6.

MATERIALS: Telmisartan was a gift sample obtained from Lupin Pharma. Microcrystalline cellulose, Ac-Di-Sol, Doshion, Primogel, Menthol and Magnesium stearate were provided by SDFCL. Sodium lauryl sulphate was obtained from NICE Chemicals and mannitol from SPB Pharma, Solan. All the chemicals and solvents were of analytical grade.

Magnesium Stearate passed through mesh No- 60, and lubricates the material. The resulting lubricated material was compressed into tablet with 6 mm punches 7 (table 1).

Hardness, which is now more appropriately called crushing strength determinations are made during tablet production and are used to determine the need for pressure adjustment on tablet machine. If the tablet is too hard, it may not disintegrate in the required period of time to meet the dissolution specifications; if it is too soft, it may not be able to withstand the handling during subsequent processing such as coating or packaging and shipping operations.

The force required to break the tablet is measured in kilograms and a crushing strength of 4Kg is usually considered to be the minimum for satisfactory tablets. Oral tablets normally have a hardness of 4 to 10kg; however, hypodermic and chewable tablets are usually much softer (3 kg) and some sustained release tablets are much harder (10-20 kg).

Tablet hardness has been associated with other tablet properties such as density and porosity. Hardness generally increases with normal storage of tablets and depends on the shape, chemical properties, binding agent and pressure applied during compression.

A significant strength of ODT is difficult to achieve due to the specialized processes and ingredients used in the manufacturing. The limit of hardness for the ODT is usually kept in a lower range to facilitate early disintegration in the mouth. The hardness of the tablet may be measured using conventional hardness testers. Three tablets were randomly picked from each formulation and the mean and standard deviation values were calculated.

% Friability of tablets less than 1% is considered acceptable.  Thus, it is necessary that this parameter should be evaluated and the results are within bound limits (0.1-0.9%).

The results obtained were shown in Table 2.

Where l is the length of penetration, r is the capillary radius, γ is the surface tension, qis the liquid viscosity, t is the time, and q is the contact angle. It is obvious that pores size becomes smaller and wetting time increases with an increase in compression force or a decrease in porosity. A linear relationship exists between wetting time and disintegration time. Thus wetting is the important step for disintegration process to take place 9.

A piece of tissue paper folded double was placed in a Petri dish (internal diameter is 6.5 cm) containing 6ml of water. The tablet was placed on the paper, and the time for complete wetting of the tablet was measured in seconds. The method was slightly modified by maintaining water at 370C.Wetting time corresponds to the time taken for the tablet to disintegrate when kept motionless on the tongue.

Assay: Twenty tablets from each batch were weighed accurately and powdered. Weight the quantity of the powder equivalent to 100 mg Telmisartan, was shaken with 100ml of 0.1N Hydrochloric acid in 100 ml volumetric flask, and from this 10 ml was pipette out and then dilute up to 100 ml. From standard solution again 10 ml pipette out and diluted up to 100 ml in 100 ml volumetric flask. Resulting solution was filtered and assayed at 292 nm and content of Telmisartan was calculated 0.1NHCL as blank.

RESULTS AND DISCUSSION: The present study was undertaken with an aim to formulate and evaluate Fast Dissolving tablets of Telmisartan using direct compression method with the addition of superdisintegranting agents. To increase the dissolution rate of poorly soluble drug Telmisartan, by using the addition of Ac-Di-Sol, Doshion and Primogel as Superdisintegrants at three different concentrations of 5%, 7.5%, 10%.

Preformulation study was carried out initially and results directed for the further course of formulation. Solubility enhancement of Telmisartan was performed by the use surfactants (Sodium Lauryl Sulfate). Various formulations of Fast Dissolving tablets Telmisartan were formulated by using various superdisintegrants- Crosscarmellose Sodium, Doshion, Sodium Starch Glycolate. The tablets were evaluated for physical parameter such as Hardness, thickness, weight variation, friability, in-vitro disintegration, wetting time and in vitro Dissolution.

Disintegration time of optimized formulation F9 was compared to other formulation, where it observed that disintegration time of F6 batch was 29 sec. The dissolution study was carried out in 6.8 phosphate buffer as a dissolution media the effect of surfactants on dissolution was studies on final formulation in which 1% SLS were added in to the tablet formulation. Stability study was carried out for the optimized formulation according to ICH guide lines at 2–8° C (controlled sample), room temperature and 40°C/75% RH for 1 month. Tablets were evaluated for assay, Disintegrating time, in-vitro drug release profile after one month. It concluded that Formulation F9 was stable. The results showed that there was no significant change in physical and chemical parameter of the tablet, hence the formulation was found to be stable. In the comparison, formulation with Doshion 10% i.e., F9 the best results was found. 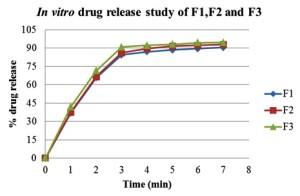 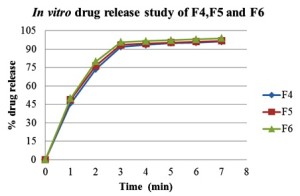 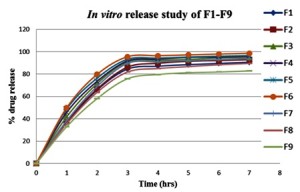 CONCLUSION: In accordance with present study it was concluded that, the present investigated Telmisartan fast dissolving tablets can be an alternative dosage form for Telmisartan tablets and the rate of drug release increased from dosage form due to which there is increase in the dissolution rate. In addition there is increase in the bioavailability of Telmisartan. Method of preparation is simple, cost effective and scalable.

ACKNOWLEDGEMENT: We are thankful to Lupin Pharma, for providing gift sample of Telmisartan. We are also thankful to respected guide and management of Manav Bharti University, Solan for their support.