ABSTRACT: An attempt was made to formulate and evaluate Fexofenadine HCl loaded chitosan nanoparticles using biodegradable polymers such as chitosan and sodium tripolyphosphate as a crosslinker in different ratio and proportions. In this formulation, Fexofenadine HCl was selected because of wide range of its use in treatment of skin allergy in the form of coated tablet and pediatric suspension. Different formulations of Fexofenadine HCl loaded chitosan nanoparticles were prepared containing 0.5%, 0.75% of chitosan and 0.5% STPP as crosslinker using ionic gelation technique. Nanoparticles were characterized for particle size determination, Polydispersity index, Zeta potential, % Entrapment Efficiency and in-vitro release study and Scanning Electron Microscopy. For the formulations F6-F10, no yield was formed which might be due to an insufficient amount of crosslinker to form the nanoparticles. F2 was selected as the best formulation to be incorporated into the gel base using carbopol 934P in different concentrations of 0.5%, 0.75%, and 1%. The formulated gels were evaluated in case of viscosity, spread ability, in-vitro release study, kinetic and skin irritation test. G1 was selected as the optimized gel for in-vivo study. Skin irritation was not observed from the in-vivo study. Thus, study revealed that the developed system has a great appeal for the convenient treatment of dermatological allergy which may overcome in improving the limitations of the existing drug delivery system.

INTRODUCTION: Fexofenadine HCl (FXD) is a non-sedating antihistamine drug indicated for the symptomatic relief of symptoms associated with rhinitis, urticaria and allergic skin conditions 1. Fexofenadine is used as hydrochloride salt and the probability that cardiotoxic effects occur in connection with fexofenadine is assessed as being extremely low when compared to other anti-histamines.

Besides, Fexofenadine may improve a safer alternative in the treatment of asthma and atopic dermatitis and is rapidly absorbed with a long duration of action, making it suitable for once-daily administration as its half-life is about 14 h 2. Nano-sized carriers such as polymeric nanoparticles, solid lipid nanoparticles, liposomes, and nano-emulsions have been widely applied as topical formulations to enhance cutaneous delivery 3, 4.

Among these nano-sized carriers, polymeric nanoparticles with readily-tunable chemical and physical features can effectively protect unstable drugs from degradation/denaturation, decrease the side effects of toxic drugs by producing controlled release, and enhance the cutaneous penetration of the drugs across the skin barrier by increasing the concentration gradient. Topically applied therapies are promising for the treatment of skin diseases such as psoriasis, contact dermatitis, and skin cancers since the drugs are delivered directly into skin strata 5. Nano-sized drug carriers have attracted much attention in the past decade as options in formulations for topical therapy. An attempt was made in the present study to formulate and characterize Fexofenadine HCl nanoparticles followed by drug-loaded nanogel.

MATERIAL AND METHOD: Fexofenadine HCl received gift sample from Dr. Reddy Laboratories, Hyderabad, chitosan and sodium tripolyphosphate (STPP) were purchased from Sigma Aldrich Mumbai. Carbopol 934 was purchased from SDFCL, Bengaluru. All other ingredients used in the experiments are of analytical grade.

Fourier Transformed Infrared Spectroscopic Studies: FTIR spectral studies were carried out for pure drug Fexofenadine hydrochloride, freshly prepared and individual substances to check the compatibility between drug and polymers using Bucker Tensor-27 (Bucker, Germany) FTIR instrument. Interaction between the components, if any, was indicated by either producing additional peaks or absence of the characteristics peaks corresponding to the drug and carrier.

Differential Scanning Calorimetry (DSC): A differential scanning calorimeter (Model DSCQ1000) was used to obtain the DSC curves representing the rates of heat uptake with respect to temperatures (40 °C to 200 °C). About 3 mg of sample was weighed and placed in a standard open aluminum pan.

An empty pan of the same type was utilized as the reference. Samples were heated from 40 °C to 200 °C at a heating rate of 5 °C /min, under a dry nitrogen atmosphere.

Preparation of Fexofenadine Loaded Chitosan Nanoparticles: Chitosan nanoparticles of Fexofenadine HCl were prepared by ionic gelation method 6. This method involves the ionic interaction between the positively charged amino groups of chitosan and polyanion tripolyphosphate (TPP), which acts as a chitosan cross-linkers.

The calculated amount of drug (1 mg/ml) was mixed with the required quantity of chitosan. Nanoparticles were prepared with the addition of Sodium tri poly phosphate dropwise to the above solution at room temperature with continuous stirring. Nanoparticles were collected by centrifugation at 8500 rpm using REMI C-24BL centrifuge apparatus, and the supernatant is collected to determine encapsulation efficiency 7.

Preparation of Gel Base: Carbopol gel base was prepared by using carbopol 934 in different concentrations such as 0.5, 0.75 and 1%. A specified quantity of distilled water was placed in a 100 ml beaker. Accurately weighed methylparaben and propylparaben were added to the distilled water and stirred at 50 rpm until it dissolves completely. A specified quantity of carbopol 934 was dispersed in the above solution slowly and mixed for 60 min and kept in the fridge overnight.

TABLE 2: FORMULATION CHART OF GEL BASE FOR FEXOFENADINE HCl NANOPARTICLES

Preparation of Gel Containing Fexofenadine HCl Nanoparticles: Transfer specified quantity of gel base into the beaker. Drug loaded nanoparticles transferred into another beaker containing a specified quantity of propylene glycol (5 ml) and mixed well. Transfer drug-loaded nanoparticles solution into gel base present in the beaker and mix for 20 min. Add triethanolamine to the above solution till proper consistency of gel obtained.

pH: The pH of the various gel formulations was determined by using a digital pH meter.

Spread Ability: It was determined by a wooden block and glass slide apparatus. The gel is placed in between the glass slides and weights about 15 gm was added to the pan. The time was noted for the upper slide (movable) to separate completely from the fixed slides. Spread ability was then calculated by using the formula:

T = Time taken to separate the slide completely from each other

Kinetic Modeling of In-vitro Drug Diffusion Profile: Data obtained from the in-vitro diffusion study of drug was used for kinetic modeling profile. The dissolution profile of all formulations was fitted to zero order, first order, Higuchi and Korsmeyer-Peppas model to ascertain the kinetic modeling of drug release. The methods were adopted to obtain the most appropriate 11, 12, 13.

Skin Irritation Study: 14 The experimental protocol for the skin irritation study was approved by the Institutional Animal Ethics Committee (IAEC/ABMRCP/2017-18/10). Skin irritation study was carried out using 6 rats of either sex weighing between 200-250 gm. The animals were kept under standard laboratory conditions with a temperature of 25 ± 2 °C and relative humidity of 55 ± 5 °C. The animals were kept in polypropylene cages with free excess to a standard laboratory diet and water. Animals were divided into 2 groups of 3 animals each. Hairs were depleted from the abdominal region using scissors and blade.

After hair depletion, the gel was applied once a day for 7 days, and the site was covered with a cotton bandage. Skin reaction at the site of application was subjectively observed and scored once daily for 7 days after patch removal. The reaction at the site of application was studied and scored according to the following numerical system such as erythema and eschar formation, edema formation, primary skin irritation index.

Stability Studies: Stability studies were carried out on optimized formulation. The optimized formulation was kept in the wide-mouthed bottle and sealed tightly with the cap and kept in the humidity chamber maintained at  40 ± 2 °C/75 ± 5% RH for one month. At the end of one month, samples were analyzed for pH, spreadability, viscosity, and in-vitro diffusion studies.

FTIR Study: In the present study the possible interaction between the drug and polymer is shown in Fig. 1. Pure Fexofenadine Hydrochloride showed 1647, 1518, 3073, 2928, 3373 cm-1 wavenumber as major peaks. The FTIR spectra of Fexofenadine HCl and the mixture of drug and excipients used in the formulation of nanoparticles reveal that there was no significant interaction between the drug and polymer and other excipients used in the formulation. The result is shown in Fig. 1. 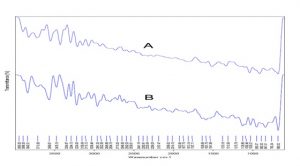 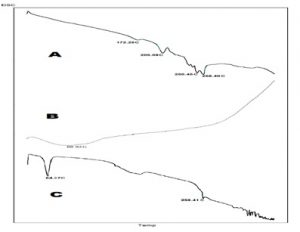 Differential Scanning Calorimetry: DSC thermogram of Fexofenadine HCl and Chitosan and the mixture show that there was no interaction found between the drug and excipients used as shown in Fig. 2.

Evaluation of the Prepared Nanoparticles: Mean particle size distribution, PDI and zeta potential value, and % EE of the prepared nanoparticles are shown in Table 3. The ratio of chitosan and cross-linker has a significant effect on particle size, zeta potential as well as % EE. It was observed that with an increase in the chitosan volume, the % EE and zeta potential value was increased, which could be due to the high payload of the drug in the polymeric matrix and the positive charge of the amino group present in the chitosan structure. As the volume of STPP increased, the lowering of zeta potential value was observed which might be due to the presence of more anionic groups present in the STPP structure. All formulation has PDI less than 0.3 indicates all formulations are homogenous in nature. For the formulations F6-F10, no yield was found which could be due to the insufficient concentration of crosslinker to form the nanoparticles.

All values are mean ± SD

It was observed that with an increase in the volume of STPP the amount of drug release was decreased, and it could be due to strong chemical bonding. In the case of F4 and F5, drug release rate was low due to the higher concentration of chitosan which affected the drug release rate.

Scanning Electron Microscope: SEM was used to observe the surface topography of the nanoparticles. It was observed that the prepared nanoparticles are spherical in nature. It is shown in Fig. 4. 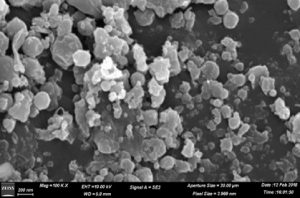 All values are mean ± SD 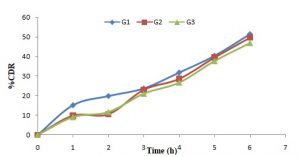 Kinetic Modeling of In-vitro Drug Diffusion Profile for G1-G3: The kinetic studies for drug release of all formulations G1, G2 and G3 were done. For this purpose, the regression coefficient of the respective formulation was determined by plotting variables as per model, i.e., zero-order, first-order, Higuchi model and Korsmeyer- Peppas model.

It was concluded that G1 and G2 are following first-order kinetic and G3 follows zero-order. The data of kinetic modeling are shown in Table 5. The n value obtained from the Korsmeyer-Peppas graph revealed that all the formulation’s release pattern follows non- fickian diffusion. It is shown in Fig. 5.

CONCLUSION: The prepared nanoparticles were used to formulate the nanogel using carbopol 934. The nano-drug delivery system developed by the ionic-gelation method has demonstrated their suitability for a topical route for the treatment of skin allergy. Thus the studies revealed that the developed system has a great appeal for the convenient treatment of dermatological allergy that may overcome in improving the limitations of the existing drug delivery system.

ACKNOWLEDGEMENT: The authors would like to show their gratitude to the management of Acharya and BM Reddy College of Pharmacy for providing the facilities required for this research.