ABSTRACT: The present research work was envisaged to develop immediate release film-coated tablets of a fixed-dose combination of Atorvastatin calcium and Amlodipine besylate used to treat the hyperlipidemia, angina pectoris, atherosclerosis, hypertension and symptoms of cardiac risk. Additionally, fixed-dose combination therapy of both drugs tends to provide a synergetic effect and reduce the pill burden. Immediate-release tablets are mostly recommended for fast upgrading drug delivery systems, and thus, an effort was made to improve the onset of action of the drug. The concept of formulating immediate-release tablets using superdisintegrants like CCS offers a suitable and practical approach to faster disintegration and dissolution characteristics. In the current investigation two methods were adopted namely direct compression and wet granulation for formulation development. Based on the drug content and dissolution results, the direct compression method was used for further study. The prepared dosage forms were also subjected to pre and post compression evaluations. The results of in-vitro drug release suggested that CF6 was the ideal formulation among all the other formulations. In-vitro drug release ATO (101.4%) and AMLO (100.3%) obtained within 30 min. The optimum concentration of superdisintegrant (CCS) was found to be 4.2% w/w in CF6 with disintegration time 21 sec. The best formulation (CF6) was made to undergo kinetic analysis followed by stability studies and shelf-life determination, which was found to be 22 months. For the protection of sensitive the drug from an external environment, the film coating method was also applied to ensure the stability of the developed formulation.

INTRODUCTION: The Oral route is one of the most sought-after routes for systemic effect due to its ease of ingestion, simple, safest, convenient, non-invasive, versatility and most importantly, patient compliance 1. Tablet dosage forms are intended to be swallowed, disintegrate, and release their medicaments readily in the gastrointestinal tract 2.

The present investigation was commenced with an objective to develop a fixed-dose combination of immediate-release film-coated tablets of numerous cardiovascular diseases like hypertension, angina pectoris, and hyperlipidemia.

The formulation of two drug combination comprised of Atorvastatin calcium and Amlodipine besylate. The drug molecule Atorvastatin calcium is a potent blocker of HMG-CoA reductase which is an early rate limiting step in cholesterol biosynthesis which is indicated for treatment of broadly atherosclerosis, strokes, coronary artery diseases, hypercholesterolemia 5. The drug molecule Amlodipine besylate is third generation dihydropyridine derivative of calcium channel blocker that prevents the transmembrane influx of calcium ions into vascular smooth muscle and cardiac muscle which is indicated for the treatment of chronic stable angina pectoris, prinzmetal variant angina and hypertension 6. This formulation also relates to producing additive and synergistic effect of Atorvastatin calcium and Amlodipine besylate, thereby these synergistic combinations are helpful in treating patients that are suffering from angina pectoris, atherosclerosis, hypertension, and hyperlipidemia.

A study reported that the rate and extent absorption of Atorvastatin and Amlodipine after the administration of a fixed-dose combination tablet has shown similar results as compared with single dose of each drug component agent 7. In another study reported that the Amlodipine and Atorvastatin single pill formulation showed improved patients compliance and decreased cardiovascular events in hypertensive patients and managed triglyceride profile. Hence, single-pill formulation efficiently improve adherence and reduce prescription costs 8. A new and improved suitable dosage form of drugs allows the manufacture to enhance the market exclusivity by offering a more convenient dosage regimen 9.

MATERIALS AND METHODS: Atorvastatin calcium, Amlodipine besylate, and all excipients were obtained as gift samples from Ind-Swift Ltd. Derabassi, Punjab.

Drug and Compatibility Studies by FTIR: Separately weighed amount of drug Atorvastatin calcium (ATO) and Amlodipine besylate (AMLO) (2 mg) was mixed with 300-400 mg of Potassium Bromide. Then the triturated samples Atorvastatin calcium and Amlodipine besylate was spread uniformly in a suitable die and then die was placed in hydraulic press and pressure (800 MPa) was applied to form a disc. The disc was mounted in the suitable holder of the detector in the FTIR spectrometer. The IR spectrum was recorded by scanning the wavelength 4000 to 650 cm-1. Both the drug samples were compared with reference working standards. A similar procedure was followed for all relevant excipients used.

Preparation of Immediate Release Film-Coated Tablets by Direct Compression Method: In this method, powders mixture of excipients and API were converted into the powder blend by using a blender, and then it was compressed to formulate tablets. Further, tablet batches were loaded with conventional coating pan to prepare the immediate release film-coated tablets. 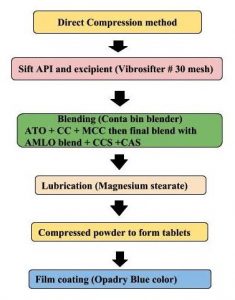 Preparation of Immediate Release Film-Coated Tablets by Wet Granulation Method: In this method, a binder solution of HPMC and polysorbate 80 were prepared. Sifted material (API and excipients) were loaded in FBD, and granules were prepared with the help of binder solution. Then dried granules were passed through 30# mesh sieve and mixed with fillers and lubricated with magnesium stearate which was then compressed into tablets. Then tablet batches were loaded in conventional coating pan to prepare the immediate release film-coated tablets. 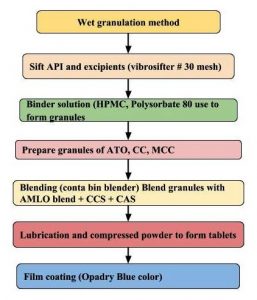 Preliminary screening studies were carried out to choose a suitable method for the formulation development of immediate-release film-coated tablets. For this, tablets collected at random from both batches PS1 (direct compression method) and PS2 (wet granulation method) (N=50) were subjected to several routine evaluation procedures pertaining to tabletting including flow properties of powdered blend, pharmacotechnical parameters, drug release and drug content.

Drug Contents (Assay): The areas of Atorvastatin calcium and Amlodipine besylate peak were quantified, and the drug content of each tablet was calculated using equations 5 and 6, respectively.

Pre-optimization Studies: The main objective of conducting pre-optimization studies was to select appropriate concentration or ratio (wherever applicable) of disintegrant in each immediate-release technique, to obtain the desired drug product characteristics for fixed-dose combination immediate-release film-coated tablets formulated by direct compression method followed by conventional film coating technique. Croscarmellose sodium ascribed as swelling 4-8 folds in < 10 sec, which enhances drug dissolution 12. Various tablet formulations (CF1-CF6) prepared by physical bends were prepared to choose an appropriate concentration range of disintegrants and glidants to formulate the best one formulation in Table 4.

Optimization: The word optimize is defined as to create a perfect, functional, and effective as possible. During the development of a new project, one generally experiments by a sequence of rational steps carefully controlling the variable and changing one at a time until a satisfactory result is obtained 13. In current studies, on the basis of results of pre-optimization studies, the formulation CF6 was further selected for optimization studies.

Optimization of Process Variable: Process optimization is the exercise of adjusting a process to optimize some specified set of parameters without violating some constraint(s). The most common goals are minimizing cost, maximizing throughput and/or efficiency. This is one of the major quantitative process in decision making 14.

TABLE 7A: TRANSLATION OF CODED LEVELS IN ACTUAL UNITS

In-vitro Dissolution Studies: Dissolution studies were carried out for all formulations in triplicate, employing USP Paddle apparatus (Type 2) using phosphate buffer (pH 6.8) as the dissolution medium. The apparatus was programmed for 60 minutes at 75 rpm and 37 ± 0.5 °C. An aliquot (10ml) of sample was periodically withdrawn at suitable time intervals and volume replaced with equivalent amounts of fresh dissolution medium.

Dissolution efficiency (DE) parameter, defined as the area under the dissolution curve up to a certain time t, expressed as a percentage of the area of the rectangle arising from 100% dissolution at the same time 15.

Stability Studies of Final Formulation: Stability studies ensure the maintenance of product quality, safety, and efficacy throughout the shelf life, and therefore considered as a prerequisite for the acceptance and approval of any pharmaceutical product 16. Thus, it was thought worthwhile to carry out stability study. The stability studies as per ICH guidelines were designed for the final optimized formulation CF6 at distinct storage conditions (25 ± 2 °C / 60 ± 5% RH, 30 ± 2 °C / 75 ± 5% RH, 40 ± 2 °C / 75 ± 5% RH). The sample was packed in an Alu-Alu blister pack and kept in stability chambers for a period of six months. Various other critical parameters were also evaluated (appearance, mean drug release, drug content and total impurities). Furthermore, the shelf life prediction of the final formulation was performed 17 (equations 8, 9, and 10).

A physical mixture of drug and polymer was characterized by FTIR spectral analysis for any physical as well as chemical alteration of the drug characteristics.

From the results, it was concluded that there was no interference of the functional group as the principle peaks of the Atorvastatin calcium (ATO) and Amlodipine besylate (AMLO) was found to be unaltered in the drug-excipient physical mixtures, indicating they were compatible chemically.

Pre-compression Parameters for Immediate Release Film-Coated Tablets: The bulk and tapped density data was used to calculate Carr's compressibility and Hausner ratio. The results are shown in Fig. 3, 4 and 5. 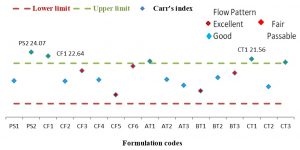 Post-compression Evaluation Parameter: Thus to ensure the quality, several post compression parameters were evaluated for all developed immediate release film coated tablets and their data have been concisely compiled in the Table 13 and Fig. 10.

Drug Content: The range of drug content for all formulation was for AMLO 93.5-103.6 and ATO 91.3-100.8 w/w, respectively. PS1 (DC) batch showed maximum drug content as compared to PS2 (WG) batches. Thus, the DC method was chosen as a suitable method for further formulation trials (CF1-CF6).

In-vitro Dissolution Studies: All the tablet formulations were evaluated for their in-vitro drug release and the results are shown in Fig. 7 and 8. The maximum drug release of ATO 101.2% and AMLO 102.6% was obtained at 60 min from formulation CF6 and minimum drug release of ATO 89.9% and AMLO 92.8% shown by CF1. The formulation CF6 containing superdisintegrants croscarmellose sodium 4.2% enhanced the dissolution rate of immediate-release film-coated tablets. Furthermore, the salient dissolution parameters viz. PD10, PD30, DE10, and DE30 were also computed for Atorvastatin calcium and Amlo-dipine besylate CF6 and optimized batches AT1-AT3, BT1-BT3, and CT1-CT3 and also ANOVA analysis result tabulated in Table 15 and 16.

Discussion about Kinetic Models: Different kinetic equations18 (Zero order, First order, Higuchi’s, Hixon-Crowell, and Korsmeyer-Peppas equation) were applied to interpret the release rate of CF6. The release obeyed Hixon crowell kinetics and the results of this investigation showed a high correlation coefficient among the formulation and the probable release mechanism was initial diffusion and the value of release exponent (R2) was found to be a 0.962 for both drug Atorvastatin calcium and Amlodipine besylate followed with non-fickian release.

Stability Studies Results: Stability study was conducted for the best formulations (CF6) selected based on in-vitro disintegration time and in-vitro drug release. There was no significant reduction in the drug release profile of formulation CF6. The results found to be satisfactory. The result was shown in Table 17. Furthermore, the energy of activation (Ea= 21652.3412) and rate constant (In A = 32.2647) was calculated using equations 8 and 9. Eventually, the values of Ea and log A was put into Arrhenius equation (equations 8 and 9) at 25°C  (0.135 K) to estimate the shelf life of the final formulation in long term condition which was found to be 22 months Table 18.

CONCLUSION: Immediate release film-coated tablets of fixed-dose combination of Atorvastatin calcium and Amlodipine besylate of 350 mg were prepared using superdisintegrants like croscarmellose sodium (CCS) with 1.4-4.2% by direct compression method. On the basis of drug content result, direct compression method was used for further development CF1-CF6 batches. The pre-optimization process was employed to optimize the appropriate concentration of superdisintegrants and glidant to achieve a desired immediate release of drug from the dosage form and CF6 batch was found as best formulation and it was further optimized for process variable and formulation variable.

Stability studies of the tablets were checked at varied storage conditions (25 ± 2 °C / 60 ± 5% RH, 30 ± 2 °C / 75 ± 5% RH, 40 ± 2°C / 75 ± 5% RH) for a period of 6 months. It can be concluded from the present work that the concentration of croscarmellose sodium 4.2% is superior to achieve immediate disintegration of tablets by direct compression method and also observed coating material does not interfere with the disintegration process. The fixed-dose combination of Atorvastatin calcium and Amlodipine besylate immediate-release film-coated tablets were found to have enhanced dissolution rate.

ACKNOWLEDGEMENT: Authors are thankful to the management of Swami Vivekanand Group of Institutions (SVGOI) for providing financial support and conducible environment to carry out the current research project.