INTRODUCTION:Diabetes mellitus is a metabolic disease characterized by high blood glucose level resulting from defects in insulin secretion, insulin action or both 1. It is a chronic disorder that affects the metabolism of carbohydrates, fats, proteins and electrolytes in the body, leading to severe complications which are classified into acute, sub-acute and chronic 2.

Chronic hyperglycemia causes glycation of body proteins which in turn leads to complications that may affect the eyes, kidneys, nerves and arteries 5.

On the basis of etiology and clinical presentation, diabetes mellitus is classified into two types. Type 1, known as insulin-dependent diabetes mellitus (IDDM) is caused by immunological destruction of pancreatic β cells resulting in insulin deficiency 6.

Type 2, also known as non-insulin-dependent diabetes mellitus (NIDDM) is characterized by both impaired insulin secretion and insulin resistance, which is often associated with obesity and hereditary disposition 7.

The drug chosen for the present investigation, Metformin hydrochloride, a biguanide, is an orally active antidiabetic agent. It is effectively used in the treatment of non-insulin dependent diabetes mellitus (NIDDM). On oral administration, it is absorbed through upper part of GI tract and absolute bioavailability of metformin is approximately 50- 60%. Metformin negligibly binds to plasma proteins 8. It has a plasma elimination half-life of 3 hours. Its daily oral dose is 0.5 to 3 g/day in divided doses 9.

Response surface methodology (RSM) is one of the popular methods in the development and optimization of drug delivery systems. Based on the principles of design of experiments (DOE), the methodology involves the use of various types of experimental designs, generation of polynomial mathematical relationships and mapping of the response over the experimental domain to select the optimum formulation 10–12. Central composite design (CCD) having 2- independent variables at 3-level is one of the RSM designs available for statistical optimization of the formulations 13.

Preparation of Floating tablets: Metformin hydrochloride, HPMC K 15M, Carbopol 934P, sodium bicarbonate, citric acid and talc were weighed accurately according to formula (Table 1). Then all of the above materials were passed through sieve # 44 for uniformity. The drug was mixed with all above excipients geometrically for 10 min to achieve homogeneous blend. Then the Magnesium stearate was mixed with above homogeneous blend. Tablet ware prepared by direct compression technique using 8 station rotary tablet press.

Experimental design: Central composite statistical screening design was used to optimize and evaluate main effects, interaction effects and quadratic effects of the formulation ingredients on the in-vitro release of the drug. A 2-factor, 3-level design used is suitable for exploring quadratic response surfaces and constructing second order polynomial models with Design Expert® (Version 8.0.6., Stat-Ease Inc., Minneapolis, MN). This design is characterized by set of points lying at 4-edges and 4-midpoint of each edge of a square and 1-center point replicates (n = 3). For central composite designs having two factors (where, α=1), suitable models include linear, second order and quadratic models.

Where Y is the measured response associated with each factor level combination; β0 is an intercept; β1 to β22 are regression coefficients computed from the observed experimental values of Y from experimental runs; and A, B and C are the coded levels of independent variables. The terms AB, A2 and B2 represent the interaction and quadratic terms, respectively 14.

Floating or Buoyancy Test: The buoyancy of the tablets was studied in USP type II dissolution apparatus at 37 ± 0.5˚C in 900ml of simulated gastric fluid at pH 1.2.The time of duration of floatation was observed visually.

Optimization data analysis and model-validation: ANOVA was used to establish the statistical validation of the polynomial equations generated by Design Expert®. A total of 11 runs were generated by Central Composite Design. All the responses observed were simultaneously fitted to first order, second order and quadratic-models and were evaluated in terms of statistically significant coefficients and R2 values. The optimized checkpoint formulation was prepared and evaluated for various response properties.

Mechanism of Drug Release studies: To study the release mechanism, various dissolution models were applied to the In vitro release profiles of the 11 different formulations (F1-F9 and triplication of F5) (Figure 1). The kinetic models included zero order, Higuchi, Korsmeyer’s-Peppas model (Table 2). The combinations of polymer swelling, drug dissolution and matrix erosion determine the drug release from swellable matrices, either on a macroscopic or on a molecular level.

As dissolution progresses, the gradual swelling of the outer layer creates proportionately new areas for drug diffusion. Since the matrix is hydrophilic, the permeation of dissolution medium takes place in the matrix and initiates dissolution of drug from the inner layers.

The dissolution rate is counter-balanced by gel formation of the matrix, which takes place simultaneously. The balance between the swelling and gelling characteristics of the matrix system is critical in maintaining the desired drug release rate 13. 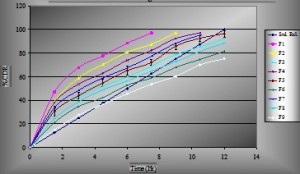 % of Carbopol 934P (B) showed a higher quadratic effect as compared to the total amount of polymer (A) on response ‘n’ of Higuchi Equation (Y1) and 'K' of Zero order Equation (Y3).

Standardized main effects and reliability of the models: Standardized Main Effects (SME) (Table 4) was calculated by dividing the main effects with their standard error 15. Only statistically significant (p < 0.05) values are given. The larger SME values of A and B suggested the almost equal importance of total amount of polymer and % of Carbopol 934P on drug release. R2-value signifies the percentage of variability in responses that are fitted to the models. In the present study, the high R2-value of >99% represents the reliability of the design. Additionally, the p-values of lack of fit were greater than 0.05, which further strengthened the reliability of the models.

TABLE 4: STANDARDIZED MAIN EFFECTS OF THE FACTORS ON THE RESPONSES

In all the presented figures, it was concluded that as; 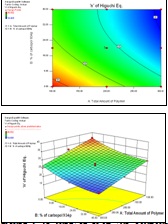 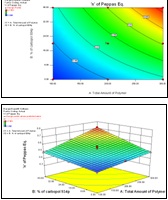 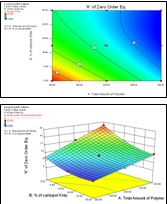 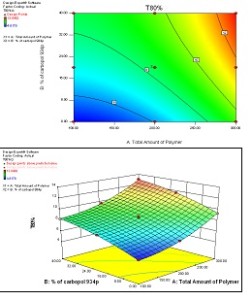 Optimization: The optimized formulation was selected based on the criteria of attaining the maximum 'n' of peppas equation for tablet formulations and applying constraints on 'n' of Higuchi Eq. (Y1) (target to 23.83), 'K' of Zero Order Eq. (Y3) (target to 8.333) and T80% (Y4) (target to 9.60h). Upon ‘trading off’ various response variables and comprehensive evaluation of feasibility search and exhaustive grid search, the formulation composition with polymer levels of total amount of polymer (A), 206.83 mg, % Carbopol 934P in polymer mixture (B), 35.10 %, was found to fulfill the maximum requisite of an optimum formulation because of better correlation of the theoretically obtained values of Y1 (23.9846), Y2 (0.590152), Y3 (8.329) and Y4 (9.600) with the standardized target values with the desirability of 0.996. The optimized formulation was found to release about 99.12% drug in sustained release manner for 12 h. Study of the in vitro release profiles in simulated gastric fluid (pH 1.2) of the formulations showed release of 22.76% during 1 h followed by a gradual release phase for about 12 h.

The release pattern of the optimized formulation was best fitted to both the zero order (K: 8.3919) and Korsmeyer’s-Peppas kinetics (n = 0.5989). These values suggested the release to be primarily by non-Fickian diffusion.

Validation of RSM results: For the optimized checkpoint formulation, the results of the physical evaluation and tablet assay were found to be within limits (Table 5). Table 6 shows the composition of optimum checkpoint formulations, their predicted and experimental values of all the response variables and the percentage error.

CONCLUSION: Floating matrix tablets of Metformin HCl with HPMC K15M and Carbopol 934P were prepared and optimized using central composite statistical design. The quantitative effect of these factors at different levels on the release rate could be predicted by using polynomial equations. Linearity observed between the actual and predicted values of the response variables suggested the prognostic ability of the RSM design. The quadratic response surface methodology studied for the release rate helped in understanding the interaction effects between the combination and ratio of the two polymers.

FTIR studies combined with the stability study of the optimized formulation proved the integrity of the developed floating matrix tablets. Thus, high degree of prediction obtained using RSM is quite efficient in optimizing drug delivery systems that exhibit non-linearity in responses.