The present study involves preparation of floating microspheres of Ranitidine Hydrochloride with Sodium alginate, Guargum and Xanthan using ionic gelation method. Floating microspheres were aimed to achieve an extended retention in the upper gastrointestinal tract, which may result in enhanced absorption and thereby improved bioavailability. The formulations were evaluated for FTIR, drug loading, % entrapment, particle size, SEM, buoyancy, dissolution study and the drug release kinetics. The enhanced floatability of the formulation and its retention in GIT may attribute for the increased bioavailability and decrease in frequency of administration. Comparison of three polymers revealed HPMC to be a suitable candidate for sustained release.

INTRODUCTION: A drug that is released from a dosage form in a controlled manner in the stomach will empty together with fluids and will have the whole surface area of the small intestine available for absorption 1. These considerations have lead to the development of oral controlled gastro retentive dosage forms possessing gastric retention capabilities. Thus Gastroretentive dosage forms, i.e. those designed to exhibit a prolonged gastric residence time (GRT), have been a topic of interest in terms of their potential for controlled drug delivery 2, 3, 4.

The multiple unit system has been developed to identify the merit over a single unit dosage form because the single unit floating systems are more popular but have a disadvantage owing to their "all‐or‐nothing" emptying process, leading to high variability of the gastrointestinal transit time.

The synthetic polymer has been used to prepare floating microspheres. The Present study was based on floating microspheres of both hydrophilic and acrylic polymers using Ranitidine hydrochloride (RH) as a model drug. It is an anti‐ulcer drug that has been widely used in treating gastric and duodenal ulceration and also in Zollinger Ellison syndrome. It is poorly absorbed from the lower GIT and has a short elimination half life of 2‐3 hours and bioavailability of 50%.

The drugs used in the treatment of ulcer include receptor blockers, proton pump inhibitors, drugs affecting mucosal barrier and act on the central nervous system5. Even though, wide range of drugs available for the treatment of ulcer, many do not fulfill the requirements and have many side effects such as arrhythmias, impotence and hemopoietic changes are noted 6. H2 antagonists unlike anticholinergics they do not cause side effects like dry mouth, urinary retention etc. They do not delay gastric emptying time which may reflexly stimulate gastric secretion because of food remaining in the stomach for long time. Also it does not cause abdominal colic and diarrhea caused by proton pump inhibitors 7. Out of the available category of drugs for the treatment of ulcer, H2 antagonists class of drugs like Famotidine, Ranitidine are considered to be the safest drugs available, and hence, this drug has promising future if controlled release formulations are made.

MATERIAL: Ranitidine HCl was gifted from J.B. Chemical and Pharmaceutical LTD. Sodium alginate, guargum and xanthan gum was gifted from Hindustan Gum and Corporation. All other material used was analytical grade.

Preparation of Floating Microsphere: Floating microsphere of Ranitidine Hydrochloride was prepared by ionotropic gelation technique using different proportion of polymers as shown in table 8.4.1. Sodium alginate was dissolved in distilled water at a concentration of 2% (w/v), the solution was stirred thoroughly after Ranitidine HCl of different ratio (Drug: Polymer = 1:1, 1:2, 1:3) and calcium carbonate (Polymer: CaCO3 = 1:1) were added. The gelation medium was prepared by dissolving calcium chloride (3% w/v) in 2% glacial acetic acid. The homogenous alginate solution was extruded using 21G syringe needle into the gelation medium. The distance between the edge of the needle and surface of gelation medium was about 10cms. The gel microspheres formed were left in the solution with gentle stirring for 30 min at room temperature to improve mechanic strength. After that, microsphere was collected and washed with distilled water twice, dried at room temperature for 24 hr and stored in desiccators.

IR Spectroscopy: FT‐IR spectroscopy was found to be the most reliable technique forpredicting the possible interaction between the drug and polymers.The IR spectra of physical mixtures were studied using KBr discmethod.

Total weight of excipients and drug

Determination of % Drug Loading and Entrapment Efficiency: The Ranitidine HCl content in prepared floating microsphere was determined by dissolving 10mg of ranitidine hydrochloride loaded floating microsphere in 100 ml of simulated gastric fluid with agitating at room temperature for 12 hr. After 12 hr, filter it through 0.45micrometer membrane filter. The rug concentration was determined spectrophoto-metrically at wavelength of 313nm. Now % drug loading and entrapment efficiency was calculated using following equation.

Weight of drug present in microspheres in gms

Weight of quantity of microspheres in gms

In vitro evaluation of Floating Ability of Floating Microsphere: In vitro floating ability of prepared floating microsphere was determined by placing 1 gms of each formulation in USP type 2 dissolution test apparatus containing simulated gastric fluid of pH 1.2. The medium was stirred at 100 rpm at 37±0.5oC. After 12hr, both fraction of microsphere (floating and settled microsphere) were collected, dried and weighed separately. Now, % buoyancy was calculated using following formula:

In vitro Drug Release Study: The in vitro release of Ranitidine HCl from different formulation was examined by using USP dissolution apparatus type 2 at 37±0.5oC. The amount of floating microsphere equivalent to 100mg of drug was placed in the basket. Simulated gastric fluid without enzyme used as a dissolution medium and temperature was maintained at 37±0.5oC and rotation speed at 100rpm.

An aliquot of 5ml solution was withdrawn at specific time interval and replaced it with dissolution medium. The sample was analyzed by spectrophotometrically at 236nm after filtration through 0.45 µm membrane filter.

Data Analysis of Release Studies: The in vitro release data obtained was treated to Zero order, First order, Higuchi, Hoffenberg and Korsemeyer – Peppas to know precisely the mechanism of drug release of the floating microspheres.

Stability Studies: A study of stability of pharmaceutical product is essential. These studiers were designed to increase the rate of chemical and physical degradation of the drug substance or product by using exaggerated storage condition. Optimized formulations were packed in amber colored bottles, which were tightly plugged with cotton and capped. They were then stored at 40oC/ 75%RH for 3 months and evaluated for the physical appearance and drug content, %buoyancy and entrapment efficiency at specific interval of time. Finally, at the end of 3 months and in vitro release studies were also conducted. 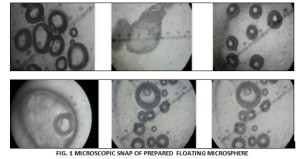 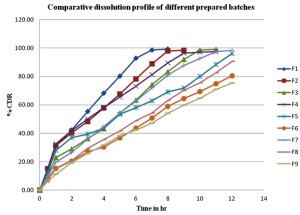 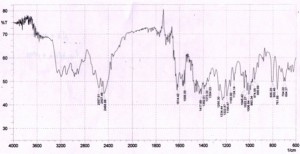 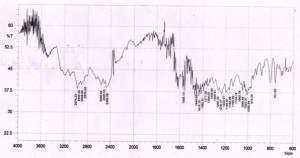 The values were found in the range of 25.20 to 36.56 which are within the normal acceptable range of 200 to 40o. Thus porous microspheres showed reasonable good flow potential. This is further substantiated by the value of Compressibility Index which was in the range 12.64 to 20.89, indication good flow characteristics of microsphere. This also implies that the microspheres are non-aggregated. The improved micrometric properties of the prepared microspheres when compared to that pure drug alone, suggest that they can be easily handled and filled into a capsule. 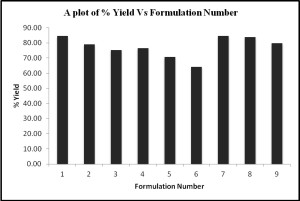 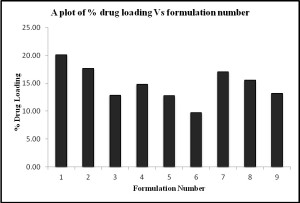 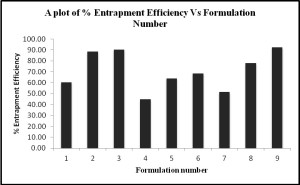 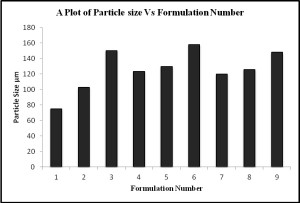 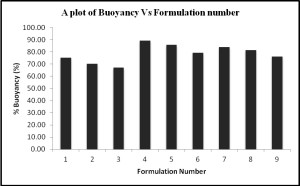 In vitro Drug Release: Formulations F1, F2, and F3  containing drug and Sodium alginate prepared at a drug-polymer ratio of 1:1, 1:2 and 1:3 released 99.21%, 99.03% and 99.04% of Ranitidine Hydrochloride in 8, 9, 11 hrs respectively. We could not extend release upto 12 hrs because sodium alginate is hydrophilic in nature and ranitidine hydrochloride is also in hydrophilic in nature.

DISCUSSION: The present novel drug floating microsphere approach for Ranitidine HCl proposes that with hydrophilic polymers the GI retention can be enhanced and the frequency of administration can be decreased. This gives a signal to extending this approach to similar combinations of drugs used in clinical practice so as to improve bioavailability of poorly absorbed drugs in GI.

ACKNOWLEDGEMENT: With a deep sense of appreciates, we acknowledge the School of Pharmaceutical Science, Jaipur National University, Jaipur. It was an inspirational practice to work under your Institute. We shall remain ever grateful to the Sr. GM (Quality), Hindustan Gum and Chemical LTD, Bhiwani.