Oral gastroretentative dosage forms offer many advantages for drugs having absorption from upper gastrointestinal tract and improve the bioavailability of medication that is characterized by narrow absorption window. The purpose of present study was to formulate and develop a new gastroretentative controlled release diffusion of furosemide from the cellulose acetate floating microspheres. Furosemide is a widely used high-ceiling loop diuretic drug with low bioavailability (60-70 %) and shorter half-life (1-2 hrs). The microspheres were prepared by using o/w emulsion solvent evaporation method. The formulated floating microspheres were characterized for their micromeritic properties, surface morphology by SEM, in-vitro buoyancy studies, percentage drug entrapment efficiency and in-vitro drug release studies. Optimization studies were carried out by taking organic phase volume and drug: polymer ratio as independent variables and percentage drug entrapment efficiency and time percentage yield and size as responses using 3-level factorial design. The prepared microsphere formulations having percentage drug entrapment of 78.4%, and buoyancy of 89.42% with floating time up to 12 hours.

INTRODUCTION: Acute pulmonary edema (APO) is a life threatening emergency that requires immediate intervention with a management plan and an evidence based treatment protocol.

Gastric emptying is a complex process and makes in vivo performance of the drug delivery systems uncertain. In order to avoid this variability, efforts have been made to increase the retention time of the drug-delivery systems for more than 12 hours 3.

The floating or hydrodynamically controlled drug delivery systems are useful in such application.

In the present study, a gastroretentive Micro-particulate system of Furosemide, capable of floating on simulated gastric fluid for more than 12 hours was formulated by solvent evaporation technique 4. Cellulose acetate, a biocompatible polymer was used to form microspheres of furosemide 5.

Approaches to increase the GRT include:

The objective of the study is to prepare and evaluate furosemide containing floating microspheres for the treatment of pulmonary oedema associated with congestive heart failure.9 It is a loop diuretic which inhibits water reabsorption in the nephron. Because the thick ascending limb is responsible for 25% of sodium reabsorption in the nephron 10. Furosemide is a very potent diuretic 11.

Iannuccelli et al prepared air compartment multiple unit system for prolonged gastric residence. These units were composed of a calcium alginate core separated by an air compartment from membrane of calcium alginate. The porous structure generated by leaching of polyvinyl alcohol (PVA), which was employed as water soluble additive in coating composition, was found to increase the membrane permeability preventing the air compartment shrinkage. The ability of floatation increases with increase in PVA, molecular weight 12.

Loading the drug in floating microspheres causes less incidence of dose dumping. Hence, this increases the GRT of drug and increases its absorption through GIT.13 This increases the bioavailability of the drug and leads to better treatment of the disease. Multiple unit dosage forms may be an attractive alternate since they have been shown to reduce inter and intra‐subject variabilities in drug absorption as well as to lower the possibility of dose dumping 14.

Preparation of Floating Microspheres: Floating microspheres loaded with drug was prepared using solvent diffusion evaporation method using cellulose acetate. Drug and polymer in different proportion was dissolved in 1:1 mixture of solvent system of ethyl acetate and acetone for cellulose acetate. This clear solution was poured slowly in a thin stream into the aqueous solution of 0.05% polyvinyl alcohol.

Experimental Design: A 3 level 2 factors factorial design  was employed to design Floating microspheres of Furosemide with the help of Design-Expert® 8 trial version software (Stat-Ease Inc., USA). The design was employed for cellulose acetate microspheres. The independent and dependent variables selected are as follows:

Volume of microspheres after tapping

Where Pt and Pp are the true density and tapped density, respectively 26.

Where, θ = angle of repose; h = height of the pile and; r = radius of the powder cone respectively.

Angle of repose affects particle size distribution, as larger the particle size, it will flow freely and vice-versa. It is a helpful parameter to monitor quality of powdered or granular pharmaceutical formulations. For good flowing materials then, angle of repose should be less than 30° 27.

Where, Wf and Ws are the weight of the floating and settled microspheres respectively.

Where R and UR are the released and unreleased percentages, respectively, at time (t); k1, k2, k3, and k4 are the rate constants of zero-order, first-order, Higuchi matrix and Peppas-Korsmeyer, respectively.33

Effect of Stirring Rate: At higher speed, irregular microspheres were obtained probably because of increased incidence of collision of the dispersed phase and subsequent rupturing of microsphere. At lower speed sticking of the microsphere was noticed. The optimum rotation speed was 300rpm with respect to morphology and yield of microspheres.

Effect of Organic solvent ratio: When acetone alone was used for preparation of cellulose acetate microspheres, fiber like aggregates was formed around the stirrer. This was because of fast diffusion of the acetone in the water before formation of the droplets. To control the diffusion rate of Acetone, ethyl acetate was added to the polymer solution. When acetone was totally replaced with Ethyl acetate microspheres were obtained with good sphericity and narrow size distribution but it took more time (3-4 hrs) for evaporation of the solvent. So co- solvents of the acetone and ethyl acetate in also affected the morphology of microspheres and best results with spherical shape were obtained when the ratio of Acetone and Ethyl acetate was 1:1. So this ratio was taken for further study. 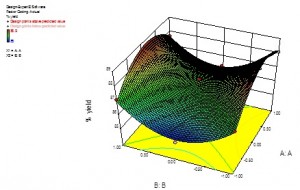 Entrapment Efficiency and Drug Loading: Response surface plot (Figure 2) indicates the positive effect of drug-to-polymer ratio on the Entrapment efficiency. Increase in the drug loading is due to increase in drug: polymer ratio, which in turn increases the efficiency during addition of the polymeric dispersion. 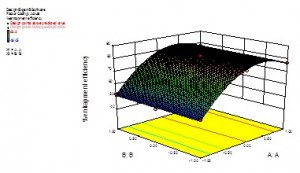 Particle Size Analysis: Response surface plot also (Figure 3) indicates the negative effect of drug-to-polymer ratio on the percent yield. As the concentration of polymer increased the viscosity of the polymer solution increased resulting in the formation of larger polymer/solvent droplets. This results in larger particles. 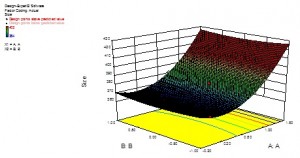 Selection of Optimized Batch: The results of experimental design indicate that the quadratic model was significant for all response parameters investigated. The multiple linear regression analysis revealed that both the formulation variables analyzed had a significant influence on all response parameters. The results obtained indicate that optimum amounts of cellulose acetate and organic phase are essential to produce microspheres with desirable encapsulation and release characteristics. The factorial data suggests that an optimum ratio of drug to cellulose acetate and high level of organic phase (F5) play a significant role to produce microspheres were able to control release of the drug for a period of 12 h.

In vitro Drug Release Studies: As per the study of in-vitro release data of all the formulations, the comparative release studies of microspheres are graphically shown in Figures 4, 5 and 6. To obtain the values of the release constant and to understand the release mechanism the in vitro release data was fitted to various mathematical models as follows: 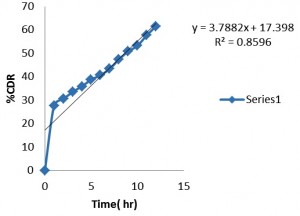 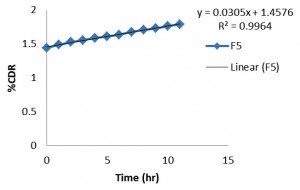 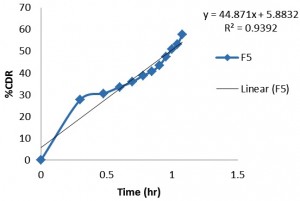 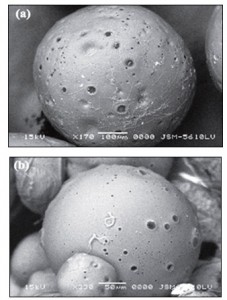 Stability Studies: Stability studies of the optimized formulation were carried out for accelerated stability testing at 40oC ±2oC with 75% RH ± 5% for a period of 3 months. The selected optimized formulations were packed in high density polyethylene containers, which were tightly plugged with cotton and capped. They were then stored for 6 months and evaluated for their physical appearance, % drug entrapment and t90% at specified intervals of time and the shelf life of the optimized microsphere formulation was predicted.

Entrapment efficiency and drug release of optimized batch F5 were found to be 82.3% and 63.042% respectively.

Mean particle size and production yield were found to be 364µm and 87.3% respectively. Percentage buoyancy was found to be 89.42%.

The optimization of floating and drug release behavior of Cellulose acetate Floating microspheres was done by applying Design Expert.

From kinetic modeling of the dissolution profile of the optimized formulation, it can be concluded that there is controlled release diffusion of furosemide from the cellulose acetate floating microspheres.

Stability studies of the optimized formulation were carry out for accelerated stability testing at 400C ±20C with 75% RH ± 5% for a period of 3 months and show that there was no major effect of temperature and relative humidity on % drug entrapment efficiency.