FORMULATION AND EVALUATION OF FLOATING TABLETS OF OFLOXACIN

FORMULATION AND EVALUATION OF FLOATING TABLETS OF OFLOXACIN

Ofloxacin is a synthetic chemotherapeutic antibiotic of the fluoroquinolone drug class considered to be a second-generation fluoroquinolone. Gastric emptying of dosage forms is an extremely variable process and ability to prolong and control the emptying time is a valuable asset for dosage forms, which reside in the stomach for a longer period of time than conventional dosage forms. Several difficulties are faced in designing controlled release systems for better absorption and enhanced bioavailability. To overcome the problem of conventional dosageforms ofloxacin effervescent floating tablets were developed in six different formulations (F1 to F6) by employing different grades of polymers and effervescent agent sodium bicarbonate. The formulations were evaluated for various physical parameters, buoyancy studies, dissolution parameters and drug release mechanisms. F6 formulation showed good physical parameters and gave slow and maximum drug release of ofloxacin spread over 24 hours and showed maximum similarity with marketed product in dissolution profile. Different kinetic models were applied to drug release data in order to evaluate release mechanisms and kinetics.

INTRODUCTION: Ofloxacin is a new fluoroquinolone derivative with a broad spectrum of activity against a wide variety of bacteria.

The bioavailability of ofloxacin in the tablet form is approximately 98% following oral administration reaching maximum serum concentrations within one to two hours. Between 65% and 80% of an administered oral dose of ofloxacin is excreted unchanged via the kidneys within 48 hours of dosing. Therefore, elimination is mainly by renal excretion.  Plasma elimination half-life is approximately 4 to 5 hours in patients. Gastric emptying of dosage forms is an extremely variable process and ability to prolong and control the emptying time is a valuable asset for dosage forms, which reside in the stomach for a longer period of time than conventional dosage forms, it is widely acknowledged that the extent of gastrointestinal tract drug absorption is related to contact time with the small intestinal mucosa 1.

Several drug delivery systems with prolonged gastric retention time have been investigated 2-4. The controlled gastric retention of solid dosage forms may be achieved by the mechanisms of mucoadhesion 5, 6, flotation 7, sedimentation 8, 9, expansion 10, 11, modified shape systems 12, 13, or by the simultaneous administration of pharmacological agents 14, 15. The floating system in particular has been extensively researched, mainly because the floating system does not adversely affect the motility of the GI tract. The floating sustained release dosage forms present most of the characteristics of hydrophilic matrices and are known as ‘hydrodynamically balanced systems’ (‘HBS’).

Since, they are able to maintain their low apparent density, while the polymer hydrates and builds a gelled barrier at the outer surface. The drug is released progressively from the swollen matrix, as in the case of conventional hydrophilic matrices. These forms are expected to remain buoyant (3-4 hours) on the gastric contents without affecting the intrinsic rate of emptying because their bulk density is lower than that of the gastric contents Small-size tablets leave the stomach during the digestive phase while the large-size tablets are emptied during the housekeeping waves 16. Many results have demonstrated the validity of the concept of buoyancy in terms of prolonged GRT of the floating forms, improved bioavailability of drugs and improved clinical situations.

Preparation of Ofloxacin floating tablets: Ofloxacin tablets were prepared using wet granulation technique. The composition of different formulations of ofloxacin floating tablets is shown in table 1. All the intragranular ingredients except PVP were passed through sieve no. 40#. After sieving, all the ingredients were weighed accurately and mixed thoroughly following geometric method. Granulation was done with a solution of PVP K-30 in sufficient iso propyl alcohol. The granules passed through 8# were dried in conventional hot air oven at 450c.Drying of granules was stopped when samples reached a loss on drying (LOD) value less than 2%.the granules were sized through sieve 20#  and lubricated with magnesium stearate and talc.

The above blend was then compressed using 10mm punch under CADMAK tablet punching machine at 4kg/cm2 force.

Ofloxacin content in the tablets was estimated by using UV spectrophotometer at λmax 294 nm in phosphate buffer (pH 1.2). The results of characterization are shown in table 2.

RESULTS AND DISCUSSION: The floating tablets of ofloxacin were formulated in six different batches F1 toF6. All formulations were prepared by effervescent approach. Sodium bicarbonate was added as a gas-generating agent. Sodium bicarbonate induced carbon dioxide generation in presence of dissolution medium (1.2 pH buffer). It was observed that the gas generated is trapped and protected with gel, formed by hydration of polymer thus decreasing density of tablet below 1 and tablet becomes buoyant. The tablet swelled radially and axially during in vitro buoyancy studies. The prepared tablets of all the formulations were evaluated for physical characters like tablet hardness, friability, weight variation, buoyancy lag time, total floating time, assay and In-vitro drug release. The results were shown in table 2.

Formulation 5 showed 98.9% drug release at the end of 18 hrs itself, may be due to less amount of polymer whereas formulation 3 was disintegrated after 6 hrs may be due to increased porosity cause of decrease in polymer amount and increase in gas generating agent. This batch friability was also found out of IP specification. Maximum drug release of Ofloxacin spread over 24 hr was found in F6, Thus F6 formulation was said to be optimized formulation. The data obtained from in vitro dissolution studies of optimized formulation 6 and marketed formulation (MF) were fitted in different models viz. Zero order, First order, Higuchi model and Peppas model (table 3). 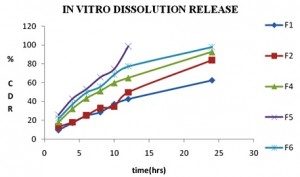 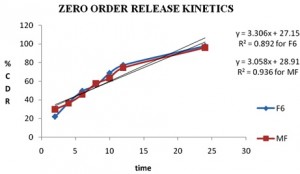 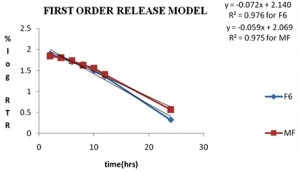 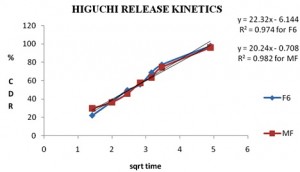 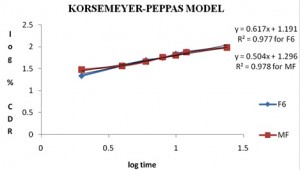 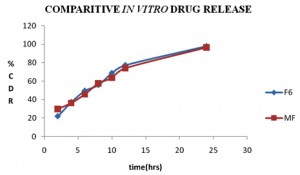 ACKNOWLEDGEMENT: The author is thankful to the almighty and Parents for their encouragement.

The author is thankful to dearest friends Vanitha and Swathi for their never ending encouragement.

The author is thankful to Dr. A. Ramesh, Principal, Faculty and Administrative Staff of Vishnu Institute of Pharmaceutical Education and Research and for their kind cooperation and encouragement.