FORMULATION AND EVALUATION OF GASTRO RETENTIVE MUCOADHESIVE FILM OF RITONAVIR

FORMULATION AND EVALUATION OF GASTRO RETENTIVE MUCOADHESIVE FILM OF RITONAVIR

MATERIALS AND METHODS: The Ritonavir was obtained as a gift sample from Mylan labs. Hydroxy Propyl Methyl Cellulose K15 M, Polyvinyl alcohol, PEG 400 obtained from central drug house private limited. All other reagents used were of pharmaceutical or analytical grade.

Construction of Calibration Curve of Ritonavir: Preparation of 0.1N HCI: 8.5 mL of Hydrochloric acid was taken in a 1000 mL volumetric flask and to this 200 mL of distilled water was added and the final volume was made up to 1000 mL to get 0.1N HCL.

Stock II: From stock I, 10 mL was taken and volume was made up to 100 mL with 0.1N HCL to produce (100 µg/mL) solution. From stock II, aliquots of 2, 4, 6, 8 and 10 mL were taken to obtain working standard solutions of 20-100 µg/mL were prepared in a 10 mL volumetric flask, and the volume was made up to 10 mL by using 0.1N HCL, and the above solutions were measured at 245 nm using double beam UV spectrophotometer. Absorbance values were plotted against the concentration of Ritonavir (µg/mL) 7.

Preparation of Gastro-retentive Mucoadhesive Film: The film was prepared by solvent casting method, in which HPMC K15M and PVA were dissolved in water separately by continuous stirring on a water bath for 10-15 min. Both the solutions were left overnight. Then both the solutions were mixed to this drug solution, and 0.1 mL of PEG 400 was added. The above solution was cast on a Petri plate coated with glycerol, with predetermined dimensions, and dried at 40 ºC for 2 h. Then the obtained films were cut into required dimensions (4 cm × 2 cm) and folded in accordion pattern, and inserted into a 00 size capsule, and are evaluated  9 ,10.

In-vitro Unfolding Behavior of the Film: The prepared polymeric film was folded into 00 capsules. In vitro unfolding study was carried out in 900 mL of 0.1N HCL using USP type I apparatus at a constant temperature of 37 ± 5 ºC at 50 rpm to examine their unfolding behavior. Baskets were removed after an interval of 2 h,4 h and 8 h, respectively 16.

Folding Endurance of Film: The folding endurance of the film was determined by repeatedly folding the film at the same place at three different positions until it breaks at the places of folding 15, 16.

Drug Content: Drug content was determined by dissolving the film in 100 mL 0.1N HCL and kept for 24 h and intermittently shaken to dissolve completely, and the absorbance was measured at 245 nm using UV spectrophotometer 8.

Swelling Index: The swelling properties of the film can be determined by placing the film in USP dissolution test apparatus I in 900 mL of 0.1 N HCL. The film should be removed periodically from the dissolution medium after draining free water by blotting, and film weight gain should be measured on an electronic balance. The Swelling index can be calculated by formula 13.

In-vitro Dissolution Studies: In-vitro drug dissolution study was carried out in 900 mL 0.1N HCL using USP dissolution apparatus I (Paddle type) at 37 ± 0.5 ºC at 100 rpm. The film was inserted into the capsule and submerged in a dissolution medium. Aliquot of 5 mL was withdrawn at a particular time interval and analyzed using UV spectrophotometer at a given λ max 245 nm. Sink conditions should be maintained throughout experiment 12.

Stability Studies: The film in the capsule was packed in aluminium foil and stored in an ICH stability chamber maintained at 40 ± 2 ºC (75% ±5% RH) for three months. The capsule was withdrawn periodically for evaluating drug content and release kinetics 14. 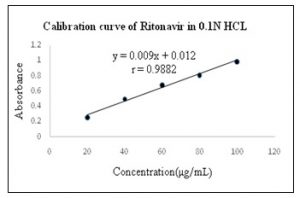 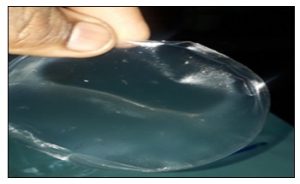 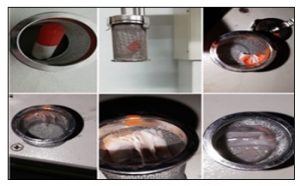 FIG. 3: UNFOLDING BEHAVIOUR OF THE FILM 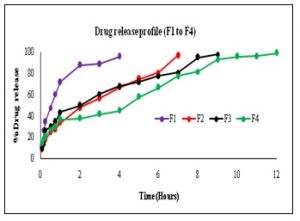 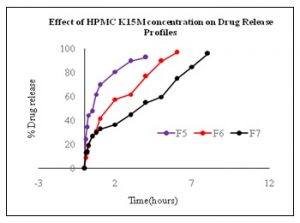 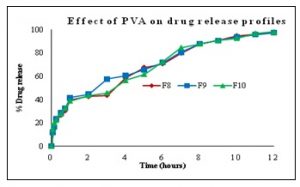 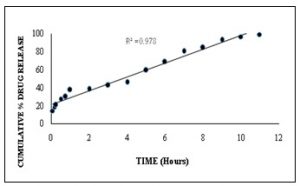 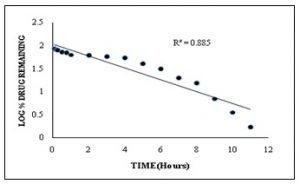 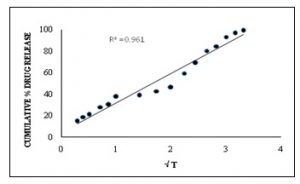 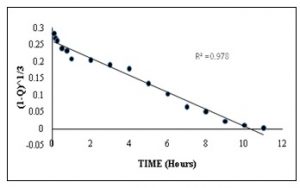 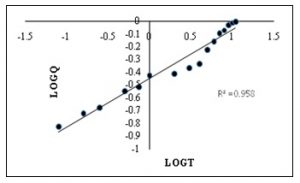 Based on the above optimization process F4 was selected as it showed maximum drug release at 12 h and the drug content was found to be 93% and in vitro unfolding behavior as well as appearance and folding endurance of the film showed required characteristics. It was observed that as the HPMC K15M concentration is increased with an increase in the prolonged activity, as PVA concentration increased, there is no effect on the drug release.

CONCLUSION: Based on the above studies, it is concluded that F4 formulation (1:1 ratio) showed the highest drug release within 12 h of 10 formulations prepared. It was observed that the concentration of polymer played a key role in drug release i.e., as the concentration increases, release rate decreases. From the above results, the present research work revealed that the gastro retentive mucoadhesive is an advanced alternative to traditional gastro retentive dosage forms.

CONFLICTS OF INTEREST: The author(s) declare(s) that there is no conflict of interest.