ABSTRACT: The present investigation concerns the design and evaluation of floating tablets of Tizanidine hydrochloride, which after oral administration are designed to prolong the gastric residence time and increased drug bioavailability. It is a centrally acting α2 adrenergic agonist. It is used in the treatment of migraine headaches, spasms and anticonvulsant. The dosage was designed by using natural polymers, Guar gum, Xanthan gum, Karaya gum, Psyllium and HPMC. Floating tablets prepared by direct compression technique. The prepared floating tablets were evaluated in terms of their precompression parameters, friability, hardness, uniformity of weight, drug content, swelling index, in-vitro dissolution studies. The floating properties and drug release studies were determined using 0.1N HCl as a dissolution medium. The best formulation was determined based on the buoyancy and drug release parameters.

INTRODUCTION:Tremendous advances have been seen in oral controlled drug delivery systems in the last two decades. In the development of oral controlled drug delivery system, one of the main challenges is to modify the GI transit time. Gastric emptying of pharmaceuticals is highly variable and is dependent on the dosage form and the fed/fasted state of the stomach. Normal gastric residence times usually range between 5 minutes and 2 hours. Drugs having a short half-life are eliminated quickly from the blood circulation. Various oral controlled delivery systems like gastro retention dosage forms have been designed to overcome this problem and release the drug to maintain its plasma concentration for a longer period of time.

Tizanidine hydrochloride has low bioavailability of 3.5-4hrs. It needs daily dosage of 2mg for three times. In order to increase the bioavailability and decrease the dosing, we need to formulate it in the form of sustained drug delivery.

In all sustained deliveries, Gastroretentive drug delivery plays an important role. The present study focus on the development of floating tablets of Tizanidine hydrochloride using different polymer grades to achieve a sustained release for long time.

Methods: Different formulations were prepared by direct compression technique. All the ingredients were passed through the sieve and placed in a polybag and mixed thoroughly. Magnesium stearate and talc were added later, and citric acid was added before tablet punching. The composition of all the formulations was shown in the Table 1.

The Precompression or Micromeretic parameters of all formulations were shown in the Table 2.

The weight variation of all the formulations were shown in Table 3 8. 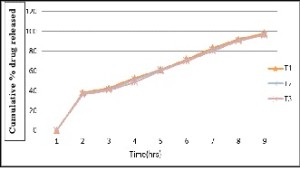 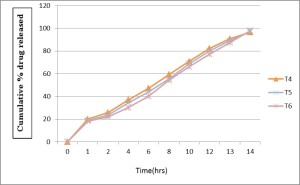 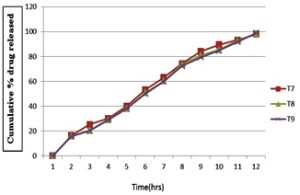