FORMULATION AND EVALUATION OF GLICLAZIDE ETHOSOMES AS A NOVEL DRUG CARRIER

FORMULATION AND EVALUATION OF GLICLAZIDE ETHOSOMES AS A NOVEL DRUG CARRIER

ABSTRACT: The main aim of the present investigation was to evaluate transdermal potential ethosomes bearing anti-diabetic drug Gliclazide. Total eight formulations (F1-F8) of ethosomes were prepared by using cold method with three different concentrations of phospholipid (0.5, 1, 2 % w/w) and ethanol (10, 20, 30 % v/v) and it was compared with hydroethanolic solution. They were evaluated for vesicular shape, size, entrapment efficiency and in-vitro studies. The formulation F6 (ethanol 20 % v/v and phospholipid (1 % w/w) was selected as the best formulation due to its optimum vesicle size, entrapment efficiency, less turbidity and maximum in- vitro release. The stability studies performed on F6 formulation at two different temperatures of 25º ± 2ºC and 4º ± 2ºC for the period of 6 months also shows the satisfactory results. It was further incorporated into gel using carbopol 934 (1, 1.5, 2 % w/w) as a base. The carbopol concentration of 1.5% w/w gives the maximum in-vitro release of 96.06 ± 0.16 % in dialysis membrane and ex-vivo release of 79.67 ± 0.35 % in case of skin of mice. The results showed the potential of ethosomes of being a safe and very efficient drug carrier for transdermal delivery of drug

Gliclazide, Phospholipid, ethanol and propylene glycol were purchased from S.d fine chem. Limited, Mumbai, India. All other reagents and solvents were of analytical grade.

Ethosomal formulation of Gliclazide was prepared by cold method 15-17.The ethosomal formulation prepared here comprised of 0.5 – 2% w/w phospholipids, 10 – 30% v/v ethanol, drug (80 mg), 10% v/v propylene glycol and water added to 100% v/v. Phospholipid and drug were dissolved in ethanol propylene glycol mixture. The mixture was heated to 30ºC in water bath. The double distilled water heated to 30ºC was added drop wise with continuous stirring at 1700 rpm in a closed vessel.

The system was kept at 30ºC throughout the preparation. Mixing was continued for additional half an hour. The ethosomal suspension prepared here was finally sonicated using probe sonicator at 4ºC in 3 cycles of 5 minutes and 5 minutes rest between the cycles. The nanosized ethosomes were formed spontaneously in this method. The vesicular preparation was stored at 4ºC overnight. The composition of ethosomal vesicles is mentioned in Table 1

The hydroethanolic formulation was prepared by dissolving drug in ethanol propylene glycol mixture. The mixture was heated to 30ºC in a water bath. The double distilled water heated to 30ºC was added drop wise with continuous stirring at 1700 rpm in a closed vessel. The system was kept 30ºC throughout the preparation. Mixing was continued for an additional half an hour. This solution prepared was finally sonicated using probe sonicator as earlier. Finally the preparation was stored at 4ºC overnight.

The ethosomal vesicle showing the highest release profile (F6) was further incorporated in to carbopol gel. The specified amount of carbopol (1%, 1.5% and 2% w/w) was added in minimum amount of distilled water and soaked overnight. The ethosomal preparation was added to the swollen polymer with continuous stirring at 700 rpm in a closed vessel. The mixing was continued until homogenous ethosomal gels were obtained. The temperature was maintained 30ºC throughout the preparation. The pH was then adjusted to neutral by using triethanolamine.

A drop of ethosomal suspension before sonication was spread on a slide and covered with cover slip. Then it was     observed by optical microscope and photomicrographs were taken.

One drop of ethosomal system was mounted on a stub covered with clean glass homogenously. A polaron E5 100 sputter coat the samples with gold and the samples were examined under a scanning electron microscope at an accelerating voltage of 20 KV.

The entrapment efficiency of ethosomes of Gliclazide was determined by ultra centrifugation technique.15 ml of ethosomal formulation was taken in a centrifuge tube and allowed to centrifuged at 12000 rpm for 2 hour. Then total volume of supernatant was measured. Then amount of drug in the supernatant layer was determined by using UV spectrophotometer at 225.4 nm. The entrapment efficiency was calculated by using following formula:

Where, Qt is the amount of drug added

Qs is the amount of drug detected in the supernatant.

Digital Nephalo-Turbidity Meter 132 was used to measure the turbidity of all the ethosomal suspensions. In this method 500 NTU (Nephalometric Turbidity Units) range is set and zero reading was set with milipore water. The ethosomal formulations were transferred to glass cuvette of capacity 50 ml. the holder was then placed inside the instrument. The turbidity measurement was displayed on the screen and expressed as NTU.

The receiver compartment was filled with 125 ml of phosphate buffer 7.4. It was stirred continuously at 600 rpm using Teflon coated magnetic bead and temperature was maintained at 37º ± 0.5 ºC throughout the experiment. 5 ml of the receiver fluid was withdrawn at each 1hour interval and replaced with same amount to maintain sink condition. The experiment was buffer withdrawn samples were analyzed for drug content using UV spectrophotometer at 225.4 nm.

This study was carried out on healthy albino mice. The animals were divided into 5 groups i.e. Standard, Control, Ethosomal Gel Formulation (G1-G3). The back skin of area 2 cm2 was shaved before one day of starting the study. Formalin was used as a standard irritant. The study was carried out for 7 days and each day a formulation was applied. At the end of study, the animals were observed for any Skin irritation like erythema or edema and conducted.

The study was done with minimum animal suffering and least possible animals. After this abdominal skin was excised, washed with phosphate buffer 7.4, carefully cleaned and finally stored at 4ºC. The mice skin was then clamped between donor and receiver compartment. The study was carried out as done previously in in-vitro release through dialysis membrane.

Drug polymer compatibility studies were carried out using FT-IR spectroscopy to establish any possible interaction of Gliclazide with the excipients used in the formulation. The FT-IR spectra of pure drug, excipients and combination of them were shown in Figure: 1A, 1B, 1C, 1D) The data shows that pure drug has 1165, 1347.03, 3263.56,1600, 3143.97 wave number as major peaks. The results indicated that mixture of pure drug and excipients has no major change in the position of peaks. This shows that there is no possible interaction between drug and excipients. 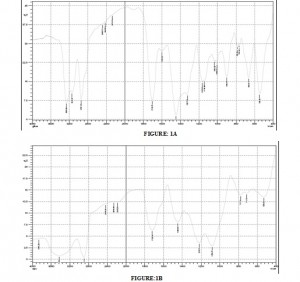 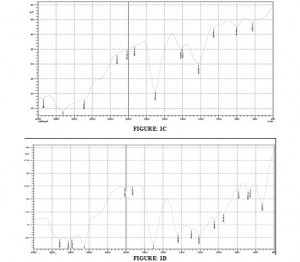 The vesicle shape of all the ethosomal formulations was found to be spherical with the smooth surface as shown in the Figure 2. 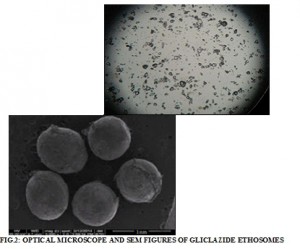 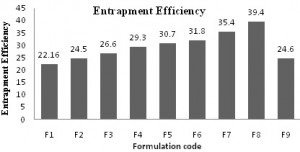 The in-vitro drug release of Gliclazide ethosomes was done for 24 hours in Franz diffusion cell in phosphate buffer 7.4 at 37ºC. The cumulative percentage of drug release of prepared formulation F1to F9 was in range 50.87 ± 0.15 to 79.65 ± 0.56 respectively at end of 24 hours (Figure 4). Among all the formulations F6 was found to be the best formulation as drug release was 79.65 ± 0.56 in 24 hrs. There was increase in the amount of drug release with the gradual increase in concentration of ethanol from 10 to 30 % v/v. This may be due to the effect of ethanol, which acts as penetration enhancer.

In both the cases the results obtained from G2 formulation was higher than G1 and G3 formulation (Figure 5 and 6). Since G2 showed the maximum release, it was considered favorable for the final development of the formulation. 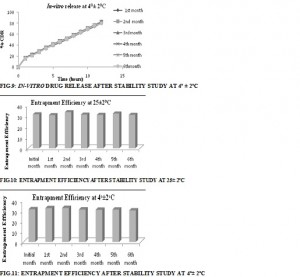 CONCLUSION: In this study, total eight ethosomes of Gliclazide by cold method and one formulation of hydroethanolic solution were prepared and evaluated for different parameters. On the basis of different parameters like vesicle shape, vesicle size and entrapment efficiency, F6 was selected as the best formulation. Thus F6 was further incorporated to gel using carobopol 934 and carbopol containing 1.5 % w/w showed maximum release.  Thus ethosomes were found to be promising candidate for transdermal delivery of Gliclazide. The results showed the potential of ethosomes of being a safe and very efficient drug carrier for systemic as well as topical delivery of drug.

ACKNOWLEDGEMENT: The authors are thankful to the management of Oxford College of Pharmacy, Hongasandra, Bangalore for providing the necessary facilities to carry out this research project.