ABSTRACT: The main aim of the study was to formulate the buccal films of most satisfactory formulation by in-vitro evaluation. The present investigation was done to formulate Hydralazine hydrochloride with an objective to improve therapeutic efficacy, Patient compliance. Hydralazine hydrochloride buccal films were developed by solvent casting method. Formulation H2, P4, S8, was best fitted to the in-vitro release studies and zero order release was observed.

INTRODUCTION: A fast-dissolving buccal film drug delivery system is a film containing active ingredient that fastly dissolves or fastly disintegrates in the saliva, within a few seconds without the need for water or chewing 1. Fast dissolving films for oral administration was a novel approach, for the patients who experience difficulties in swallowing tablets or capsules. Geriatric, pediatric and dysphasic patients associated with many medical conditions face a problem of difficulty in swallowing the solid dosage forms.

One study showed that 26% of 1576 patients experienced difficulty in swallowing tablets 2. Oral fast-dissolving drug-delivery systems were developed in the late 1970’s to overcome the problem of difficulty in swallowing solid dosage forms 3. These systems consist of oral dispersible tablets (ODT) that disintegrate and dissolve quickly in the oral cavity. Oral strips and oral films which rapidly dissolves under the tongue or buccal cavity, could also improve the dissolution of poorly soluble drug. It gives the residence time of the dosage form at the site of absorption, hence increase the bioavailability. It gives ease of administration to paediatric, geriatric patients and also to the patients who are mentally retarded, disabled or non-cooperative 4.

In this current study, the films were prepared by solvent casting technique, using good bio adhesive polymers like HPMC (Hydroxy propyl methyl cellulose), Sodium Alginate, Pectin as major polymer were used for the studied. The in-vitro release studies and further physical characteristics of the films were evaluated. The selected formulations were kept for stability as per ICH guidelines.

Preformulation Studies: Preformulation studies such as physical appearance, solubility, melting point, hygroscopicity and drug excipient compatibility were performed to confirm the suitability and stability of drug and excipient for the formulation of Buccal films 6, 7.

Preparation of Buccal Films: Nine batches of drug loaded buccal films were prepared using drug with different   polymer (HPMC, pectin, sodium alginate) in different Drug: Polymer ratio (1:1, 1:3, and 1:5). Weighed quantity of polymer was dissolved in calculated quantity of water and heated on a water bath. Calculated amount of drug was added to the above mixture and stirred well until a homogenous mixture was formed. Then calculated amount of permeation enhancer and Glycerin were added.

The resultant mixture was poured into a petridish and air dried at room temperature for 24 h. The films were then peeled off from the petridish with the help of a knife and kept in desiccator. Formula shown below

Thickness of the film:

The thickness of the film was assessed by using digital verniercaliper at different points of the film. From each formulation three randomly selected films were used. The average value for thickness of a single film was determined. The result is shown in Table 6.

Folding Endurance: This was determined by repeatedly folding one film at the same place till it broke. The number of times the film could be folded at the same place without breaking gave the value of folding endurance. The result is shown in Table 6.

Percentage Moisture Content: The film was weighed and kept in desiccator containing calcium chloride. After 24 h the film were taken out and weighed. The percentage moisture content was calculated using the following formula. The result is shown in Table 6.

Percentage Moisture Uptake: The film was weighed accurately and placed in desiccator containing aluminium chloride. After 24 h, the film was taken out and weighed. The percentage moisture uptake was calculated the difference between final and initial weight. With respect to initial weight. It is calculated by using following formula. The result is shown in Table 6.

Determination of Surface pH: The films was allowed to swell by keeping them in contact with 1ml of distilled water for 2 h at room temperature and pH was noted down by bringing the electrode in contact with the surface of the film, allowing it to equilibrate for 1 min. The result is shown in Table 6.

Tensile Strength: Tensile strength is the maximum stress applied to a point at which the film specimen breaks. It is calculated by the applied load at rupture divided by the cross-sectional area of the strip as given in the equation below. The result is shown in Table 6.

Uniformity of Weight: This was done by weighing five different patches of individual batch taking the uniform size at random and calculating the average weight of three. The tests were performed on strip which was dried at 60 °C for 4 h prior to testing. The result is shown in Table 6.

Drug Content Determination: The film was taken and added to a beaker containing 100 ml of Phosphate buffer saline pH 6.8. The medium was stirred by magnetic bead for 60 min. The solution was later filtered and analyzed for drug content with proper dilution at 260 nm spectro-photometrically. The result is shown in Table 6.

Percentage Elongation: When stress is applied, a strip sample stretches, and this is referred to as strain. Strain is basically the deformation of strip divided by original dimension of the sample. Generally, elongation of strip increases as the plasticizer content increases. It is calculated by using following formula. The result is shown in Table 6.

In-vitro Drug Release: The in-vitro release rate of Hydralazine Hydrocloride buccal film were evaluated by open ended tube through using PBS pH 6.8 as diffusion medium up to 60 seconds studies. The cellophane membrane is tied in one end of the tube and then immersed in the receptor compartment containing 400ml of PBS pH 6.8 which was stirred at medium speed and maintained at 37°C ± 2°C. Samples were withdrawn at regular time intervals and the same volume was replaced by fresh diffusion medium. The samples were analysed using UV - visible spectrophotometer (Shimadzu (DM) UV1700) set at 260 nm.

3. Solubility: The solubility of drug in various solvents was shown as follows,

Hydralazine hydrochloride is non-hygroscopic in nature

Observation: The sharp peak observed at 260 nm, further measurements were taken at 260 nm. 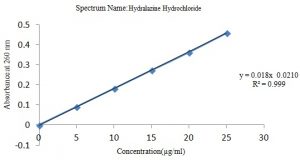 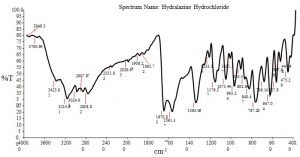 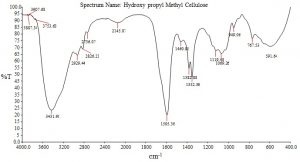 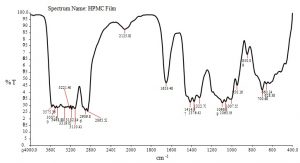 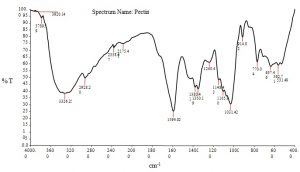 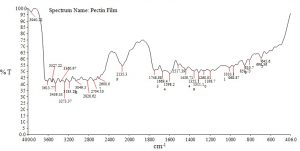 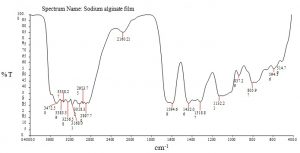 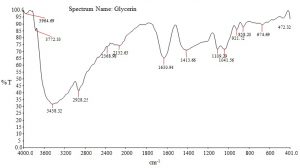 The FTIR graphs of drug, excipients and formulations showed (Fig. 3, 4, 5, 6, 7, 8 and 9) that there is no extra peak (or) broadening of peaks were observed and thus it indicates that there is no incompatibility between drug and excipients. 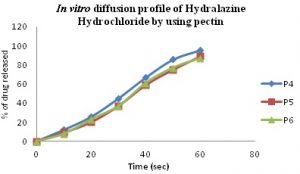 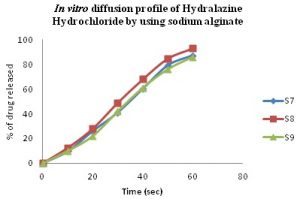 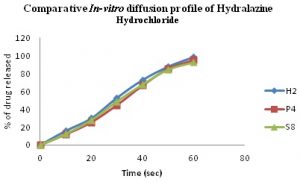 CONCLUSION: From this study H2, P4 and S8 concluded as optimized and stable formulations from the results of physiochemical evaluation of Hydralazine hydrochloride buccal films with an effective percentage of drug release at 60 sec indicating faster and maximum absorption at the site of administration.

ACKNOWLEDGEMENT: The authors are thankful to the managing trustee Karpagam institutions. We are thankful to Faculty of Pharmacy, Karpagam Academy of Higher education, Pollachi road, Coimbatore for providing us the facilities for carrying out the research work.